This is Part 4 of our summary report on the highlights of Paris Photo 2022. Part 1 of the report (here) explains the format used in the detailed slideshow below, provides some background for the discussion, and covers earlier sections of the fair. And Parts 2 and 3 of the summary can be found here and here. So while it is certainly possible to jump directly into any one of these individual reports, if you want or need a bit more context, return to Part 1 as a starting point. 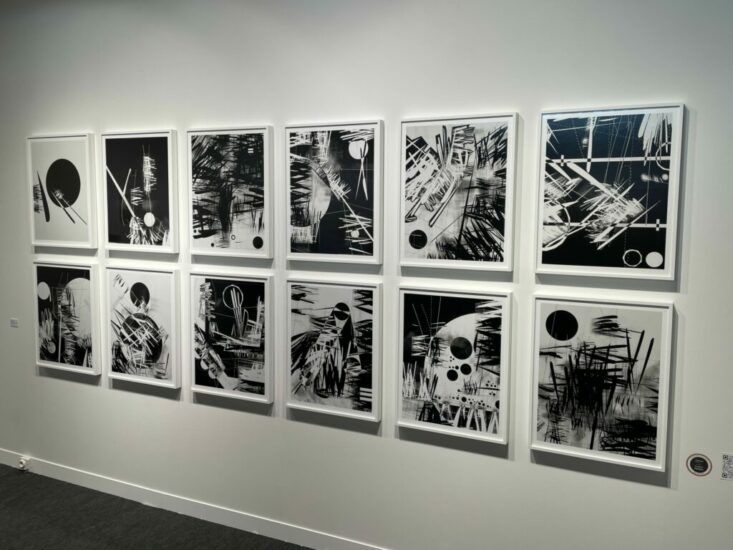 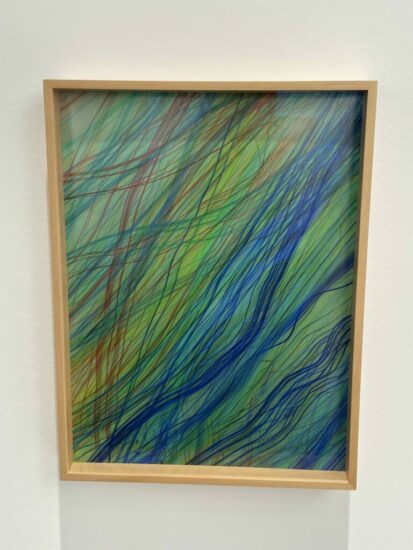 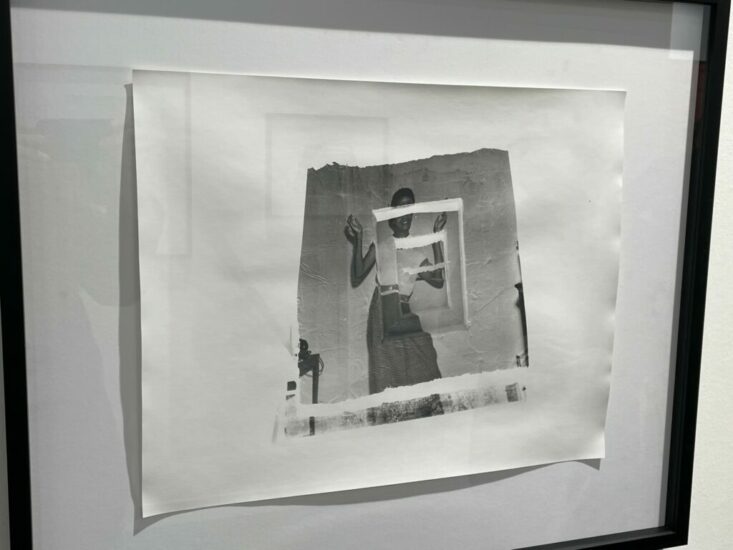 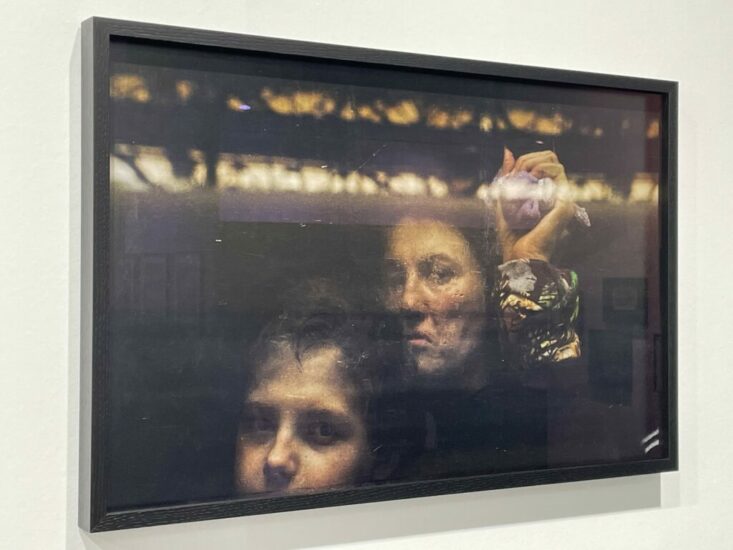 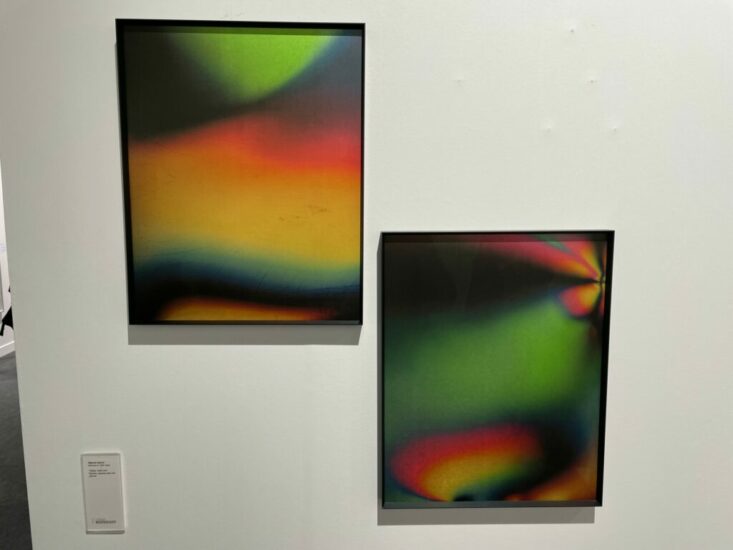 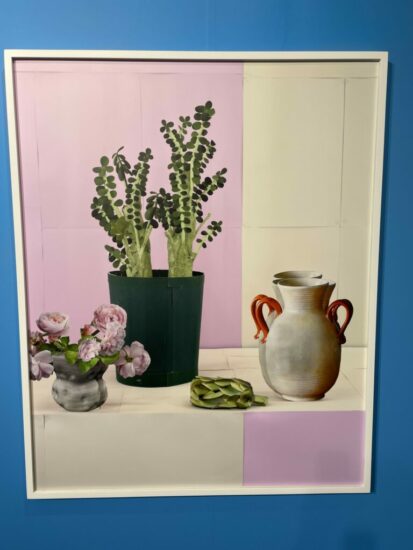 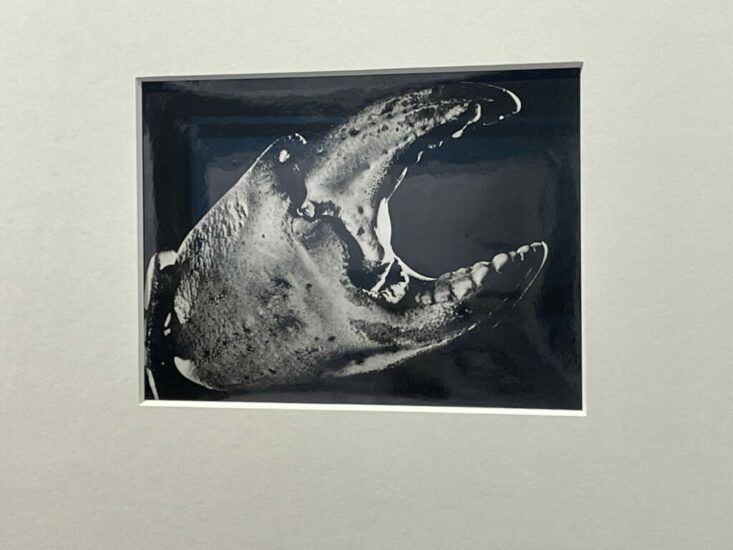 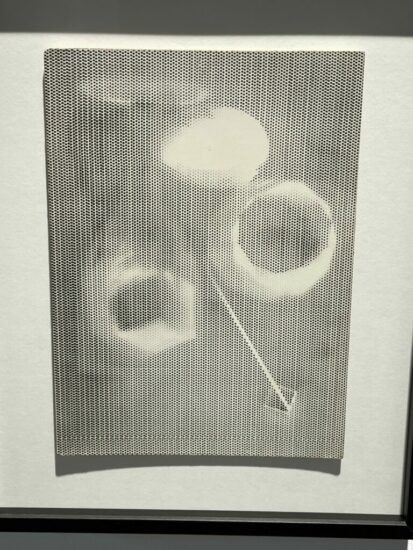 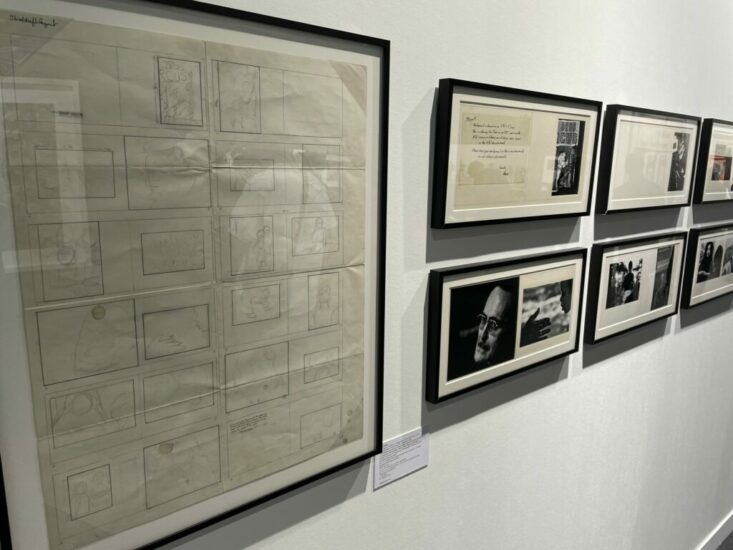 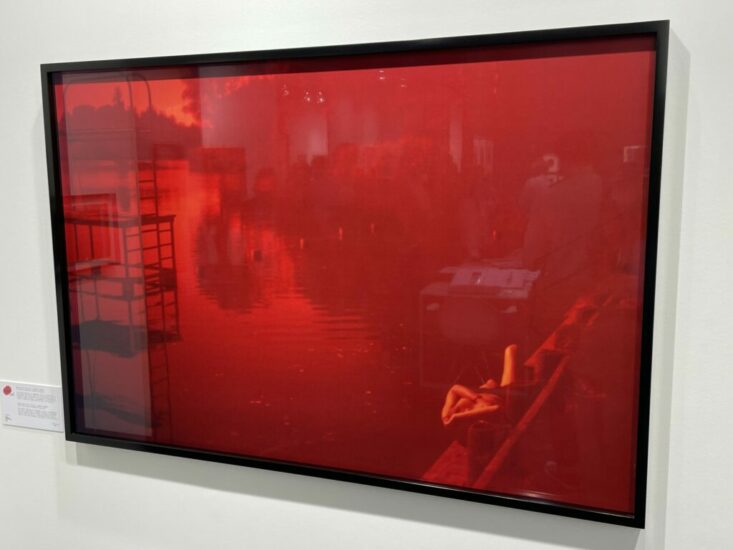 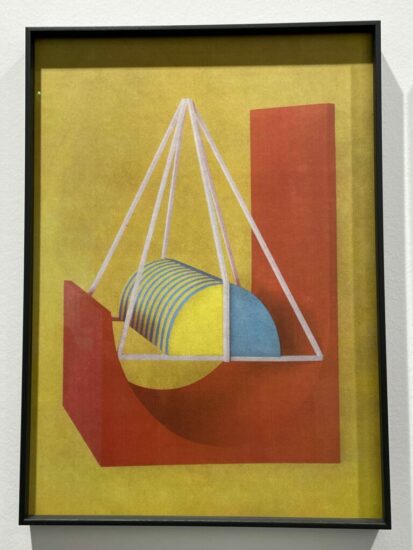 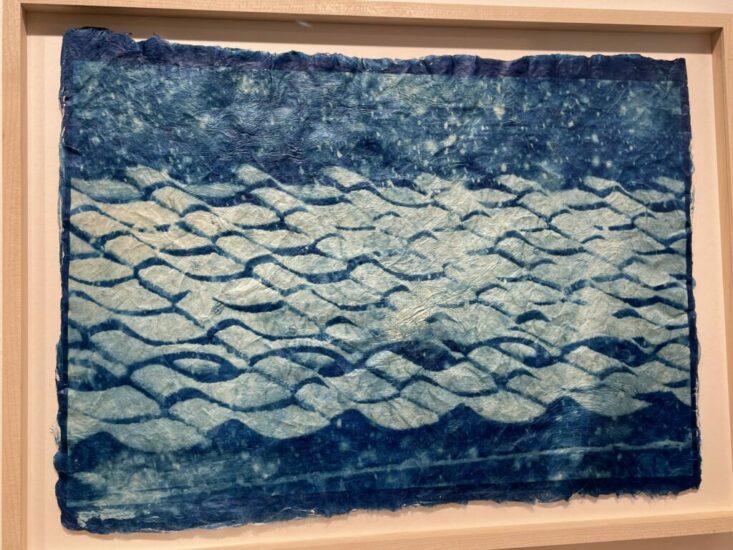 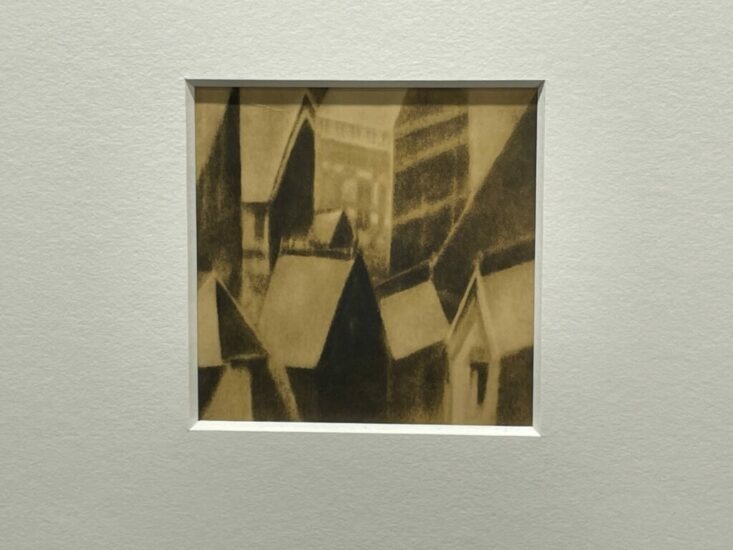 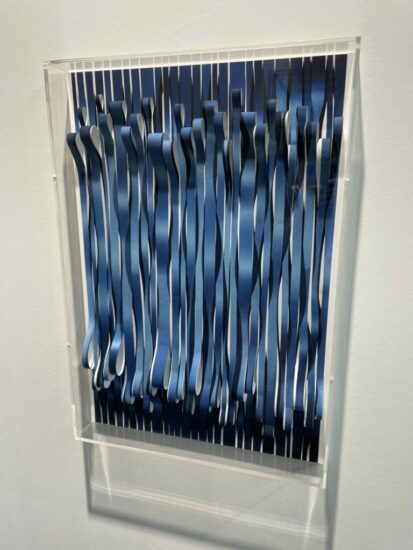 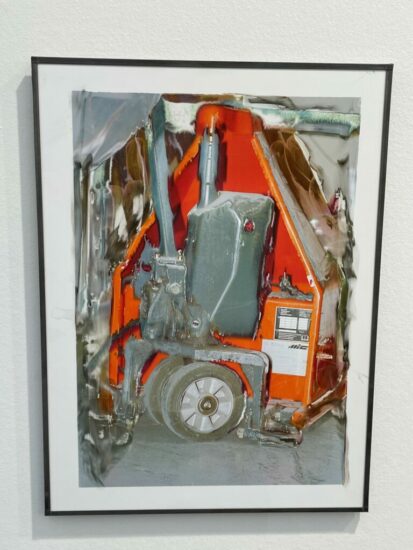 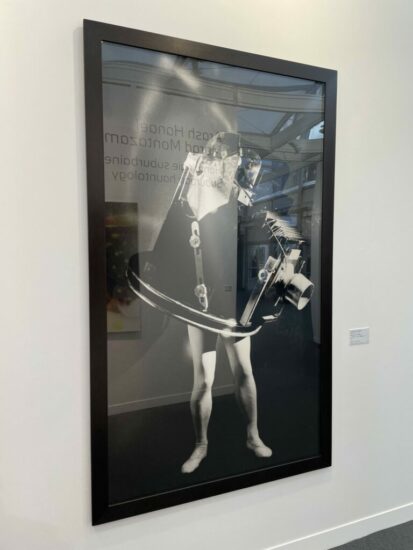 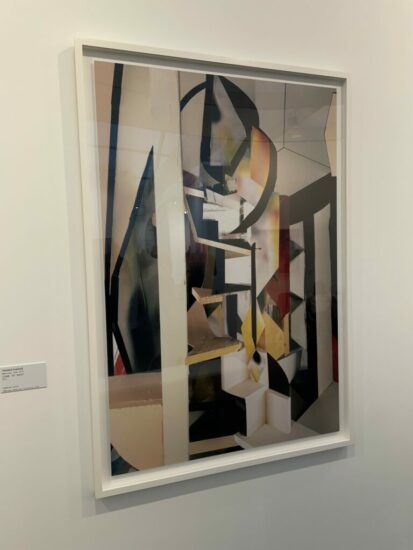 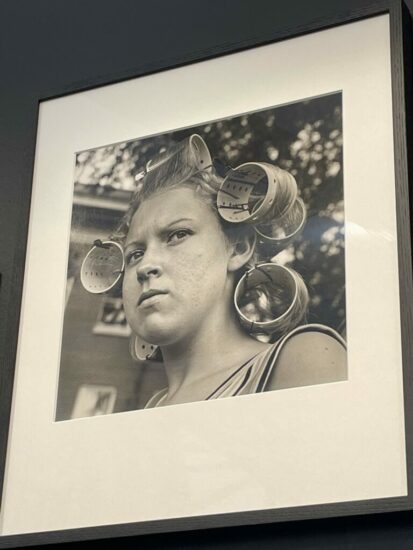 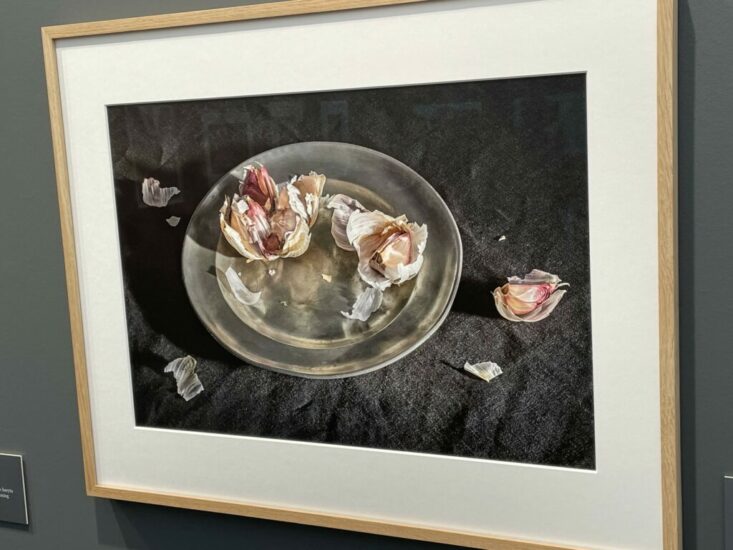 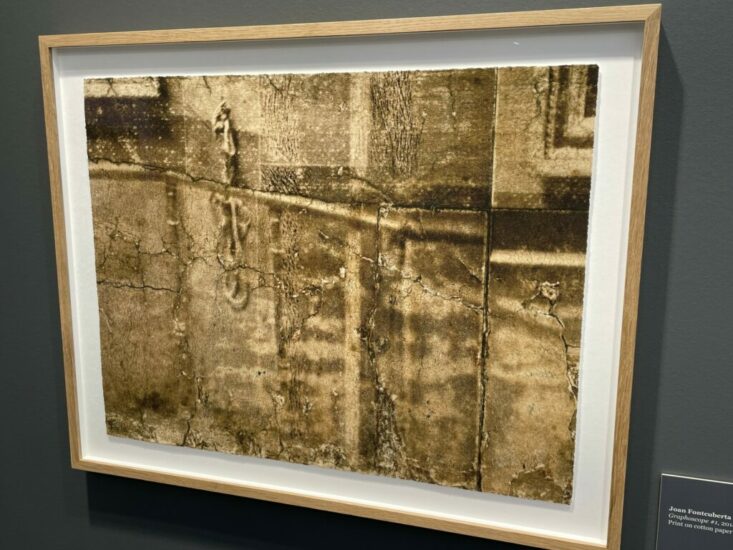 Fellowship (here): These twelve high contrast black-and-white works by Dmitri Cherniak are part of a larger series of 100 NFT/print combinations. Technically, they aren’t photographs, since there is no camera, darkroom, or even light involved, at least to begin with; instead the generative works are made algorithmically, and output later, in this case, as photographic negatives and then prints. Working closely with the Moholy-Nagy estate, Cherniak created motifs inspired by (and in response to) Moholy-Nagy’s aesthetics, and then let the rounds, angled lines, and stylized train tracks iteratively reconfigure themselves. His results are variously overlapped and inverted, creating plays of positive and negative tonalities that pile up with scratchy intensity. With regard to pricing, the individual works weren’t directly available for purchase, but will instead be sold as part of a Dutch auction in early December, so the eventual pricing will be dependent on the interest at that release point. For collectors unfamiliar with NFT sales, the buy-in prices, gas fees, $ to ETH conversions, and other details may feel dauntingly mystifying, but it seems likely that a range of prices in the mid five figures (per work) will ultimately emerge.

Galeria Filomena Soares (here): Thin strands of wavy color rush across the surface of this 2021 abstraction by Edgar Martins. Threads of cast light provide the subject matter, each line seeming to wander and unravel with wispy ephemerality. The density of the overlapping fibers creates a sense of energetic motion, with each loose gesture creating its own quivering pathway across the space of the frame. Priced at €5500.

Galerie Crone (here): The lack of a readily available archive of vintage prints is often a problem for an artist’s estate; not only does it slow down the ability to sell works and generate funds, it also impedes the wider sharing of the work in the form of shows and exhibitions. In the case of Darrel Ellis, there were few vintage prints of his work from the 1980s left after he died of AIDS in 1992, and now with the support of the estate, a wider set of posthumous prints (in editions of 10) has been produced, thereby enabling some broader distribution. Ellis’ images repurpose family photographs made by his father, using projection and rephotography techniques to reinterpret the fragmented memories. Here the figure is broken into telescoping rectangles, like echoes of emotions that shimmer and reverberate. Priced at $10000.

ºCLAIRbyKahn (here): This haunting photograph was made by Chien-Chi Chang at the train station in Lviv just after the start of the war in Ukraine, when families were separating, with men heading off to fight and women and children fleeing to Poland and elsewhere. The window of the train provides a physical barrier, with the reflections and misted water droplets further distorting the silent communication. The glances in the image mix vulnerability and powerful resistance with a rumble of quiet dead-eyed determination. Priced at €7000.

Galerie Esther Woerdehoff (here): Given their innovative use of gold leaf in combination with delicately textured Japanese papers, the artist duo of Abarrán Cabrera have developed a photographic color palette with a uniquely rich glow. In these abstractions from 2022, the color sifts into gradients that bend and flow, washing into rainbows of saturated fades and curves. Priced at €4600 each.

Huxley-Parlour Gallery (here): This booth was a solo presentation of new works by Daniel Gordon, backed by bold wallpaper and a new monograph. The new pictures continue to explore Gordon’s signature approaches to image-based paper construction, further refining his still life arrangements and stylized silhouette portraiture. In this work, the bolder colors and more intense shadow motifs of earlier efforts have been softened and pared back, building up visual mysteries and contradictions with the simpler forms of doubled jugs and flattened leaves. Priced at €16450.

Les Douches la Galerie (here): This 1929 image by Jean Painlevé and Eli Lotar turns an up close, almost scientific photograph of a lobster claw into a Surrealist nightmare. Set against enveloping blackness with dramatic lighting, the pincers seem to rear up with encroaching menace. Priced at €10000.

Les Douches la Galerie (here): While most of Man Ray’s photograms were arrangements of objects against the blackness of full exposure, in this 1922 work a perforated mesh interrupts that darkness, creating a softer dotted surface. Bright whiteness then interrupts the uniformity of the pattern, introducing vaguely geometric ghosts that hover and dissolve. Priced at €25000.

Stephen Bulger Gallery (here): The outside wall of this booth hosted a maquette for Dave Heath’s 1963 photobook The Human Condition. A total of just 21 prints were arranged into 12 spread layouts, with each image meticulously sized and aligned within the available confines of the page. The hand drawn storyboard brings it all into one integrated flow, pulling back the curtain on the way the landmark photobook was actually designed. Priced at €150000 for the entire maquette.

Bildhalle (here): A thick red tint envelops this quiet lakeside scene by Simone Kappeler, giving it a sense of sultry heat and stylized stillness. The surface of the water is rippled like antique glass, and the warmth of the day seems to wash over the empty swimming area, leaving the lone sunbather to relax in the silence. This photograph feels like an exercise in atmosphere, where setting is transformed into mood. Priced at €16000.

Galerie Binome (here): This playful 2021 image by Laurent Millet has the look and feel of a pastel drawing, perhaps illustrating some geometric flight of fancy from times gone by. What is more impressive is that not only is the work a contemporary photograph (made with the obsolete but appropriately tactile gum bichromate process), it documents an actual physical sculpture built by the artist. The works from the series feel like precisely executed geometric illustrations or book prints, with stylistic echoes from the Bauhaus and De Stijl wafting through the air. Priced at €3700.

IBASHO (here): The Japanese gampi paper used in this recent work by Mika Horie is naturally rippled and textured, making it an elegant substrate for an abstracted cyanotype of water. The wave-like forms march across the surface, with droplets and mists thrown into the areas of darker blue. The result is simple but satisfying, pulling abstraction back toward allusively graphic representation. Priced at €1650.

IBASHO (here): The planes of the crowded rooftops in the c1930 image by Masuzo Yamazaki have been reduced to flat parallelograms, the lights and darks pushed to extremes. The image feels almost Cubist in these reductions, the energy of the changing city turned into jutting angles and interlocked tonalities. Priced at €6500.

Galerie Anita Beckers (here)/Galerie Kornfeld (here): This 2022 work from Christiane Feser finds her playing with loops and billows, seemingly turning a striped image back on itself. The disorienting undulations of the rephotographed image and the physical cut paper confound our sense of depth, with waves that move up and down and highlights of edges that never quite align in the ways we might have expected. Priced at €7700.

Sentiment (here): The expressive melting quality in this image by Jean-Vincent Simonet was made by printing on plastic coated paper and overinking the print, leaving the image wet for longer than normal. Simonet could then intervene, creating blurs, washes, dissolves, and other painterly effects. The larger series captures the machinery in his family’s print factory, thereby mixing history and memory with deliberate process disruption. Priced at €1900.

JP Morgan Chase Art Collection: Especially when presented in the context of a photography art fair, Laurie Simmons’ 1987 ”Walking Camera” still has plenty of bite. Its puzzling combination of inanimate object (in this case, the camera) perched on men’s legs mixes a Surreal impulse with something more incisively gendered and commercial. Perhaps it should become the visual calling card for the male gaze. (No price.)

JP Morgan Chase Art Collection: Yamini Nayar’s compositions always feel nearly impossible to understand, which is why they remain so fresh and unsettling. In this 2017 image, the planes and shadows of the sculptural installation have been flattened in ways that make it hard to unravel the reality, with steps, edges, and painted surfaces arranged in an elegantly confused jumble. (No price.)

MUUS Collection (here): This booth was a solo presentation of the early work of Rosalind Fox Solomon. Made in Scottsboro, Alabama, in the mid 1970s, the photographs capture the people at the First Monday Market, and find Solomon refining a picture-making style that mixes compassionate intimacy with an interest in overlooked eccentricities. This young woman in surprisingly large hair curlers seems wary of Solomon’s gaze, but the resulting portrait is somehow regal, the arrangement of the tubes like a makeshift crown. (No price.)

Fondation des Amis du Musée du Prado: Many photographers have recreated the aesthetics of still life paintings, but this image by Pilar Pequeño is certainly a best of breed example. The precise arrangement of the garlic on the plate (and the few loose shards of peelings nearby), the way the light is cast across the setup, and the general angle of the vantage point all help to provide the structure of such a faithful recreation. But this image goes several steps further, getting the warm glow of the tin plate and the pink color shadings of the garlic cloves just right. (No price.)

Fondation des Amis du Musée du Prado: This crackled and sepia-toned image was made by Joan Fontcuberta using the Prado as his ostensible subject. He began with a 19th century panorama of the interior of the museum’s central gallery displayed with a rotating device called a graphoscope, and then enlarged a tiny fragment of that larger image. His composition mixes the fragment of a wall (two corners of framed paintings can be seen near the edges) with the deterioration of the original print itself, the surface becoming gloriously tactile, and making it difficult to untangle actual history from the concepts of preservation and decay.