This is Part 3 of our summary report on the highlights of Paris Photo 2022. Part 1 of the report (here) explains the format used in the detailed slideshow below, provides some background for the discussion, and covers earlier sections of the fair. And Part 2 of the summary can be found here. So while it is certainly possible to jump directly into any one of these individual reports, if you want or need a bit more context, return to Part 1 as a starting point. 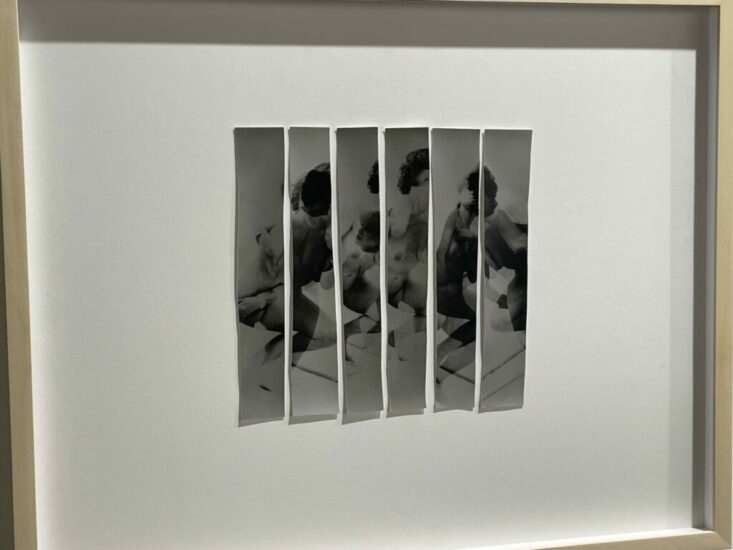 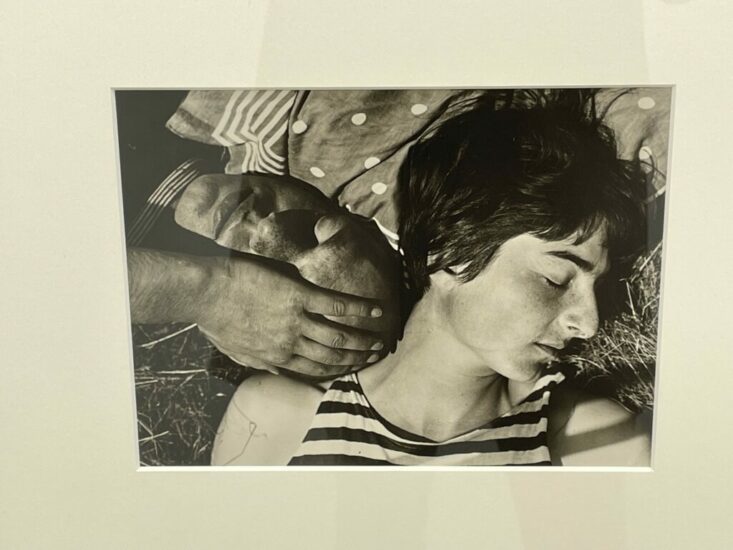 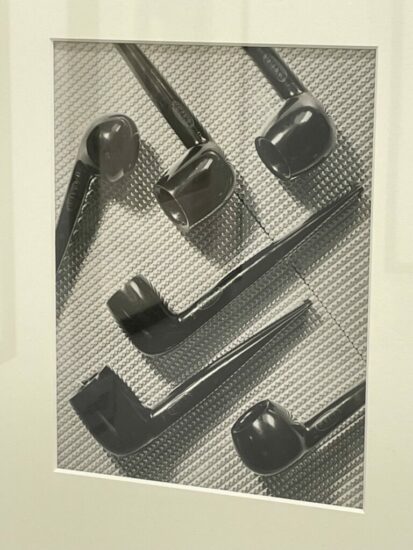 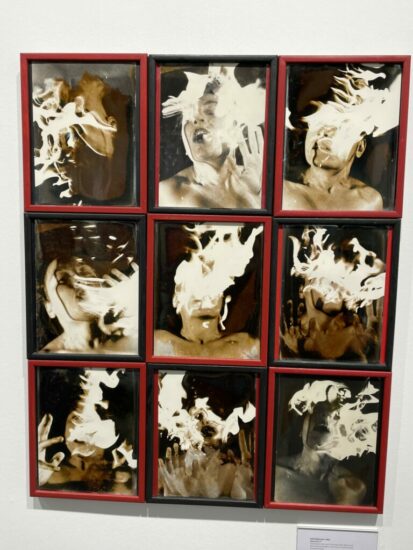 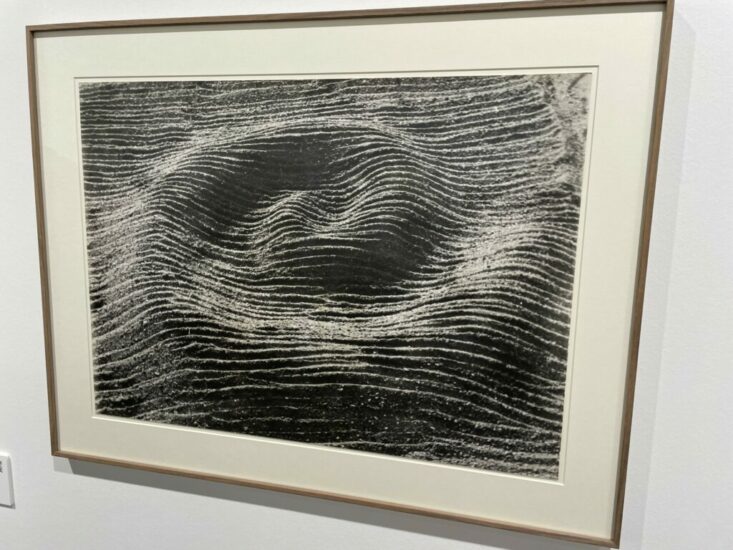 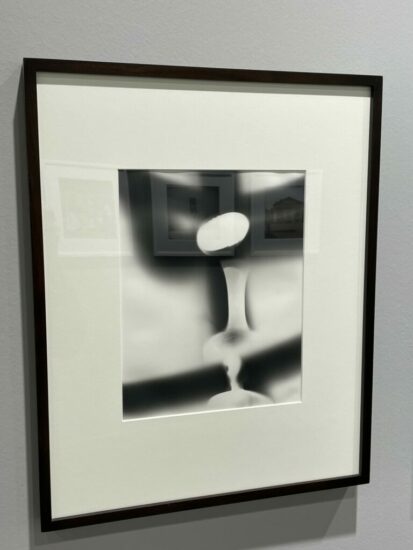 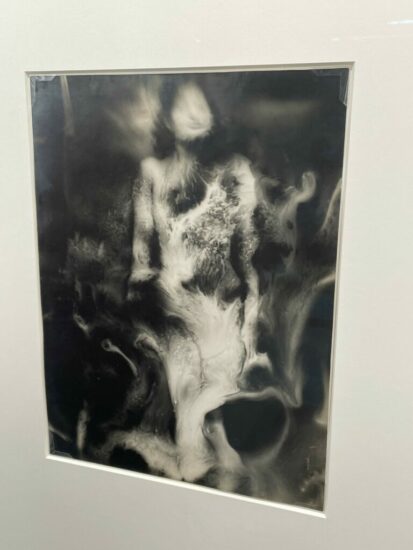 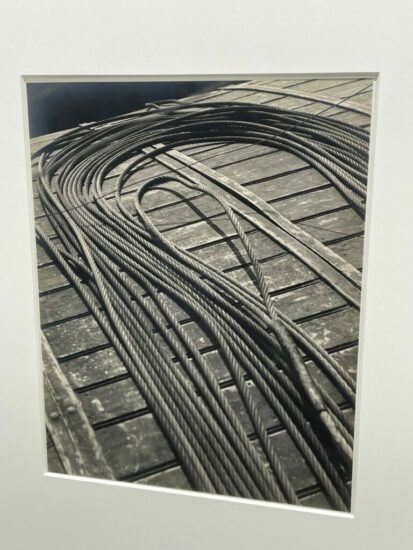 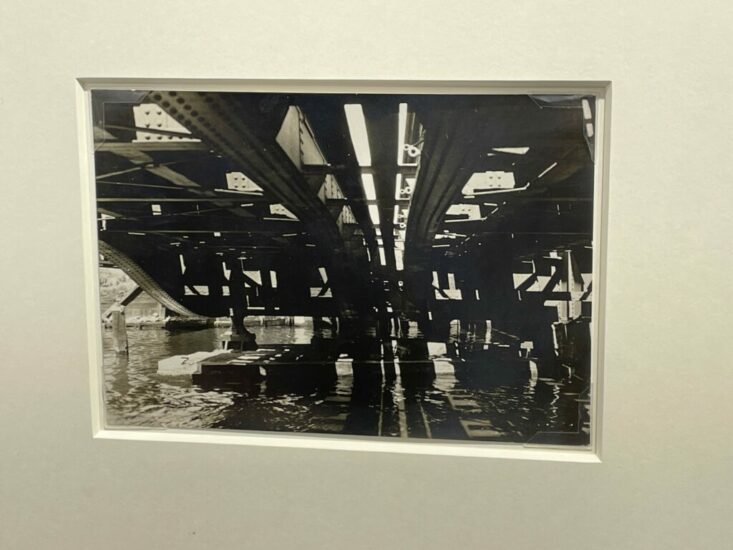 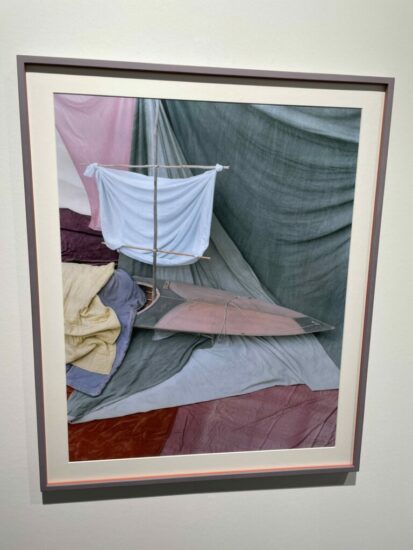 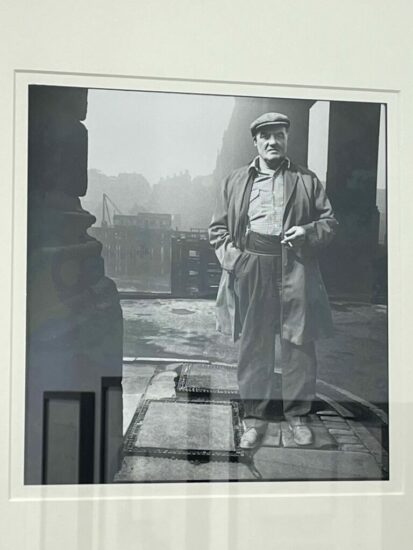 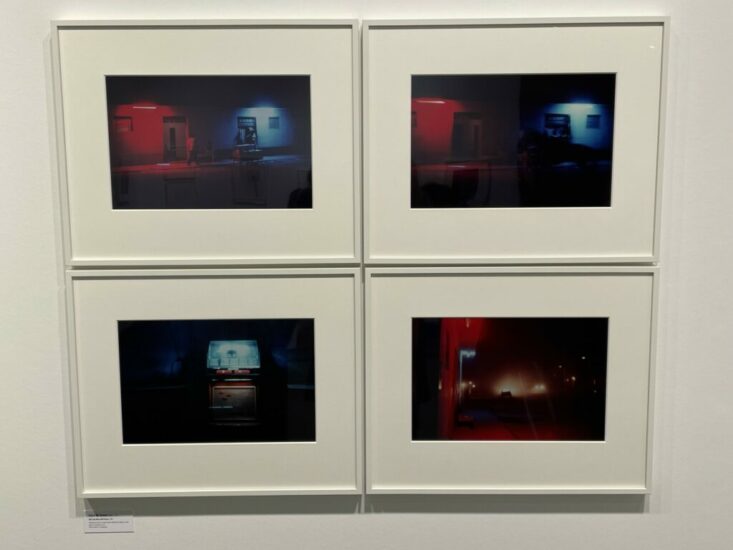 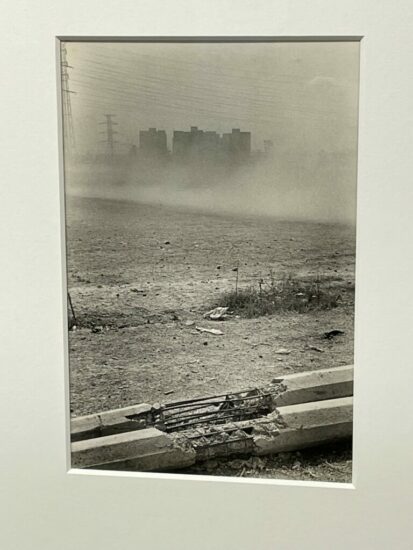 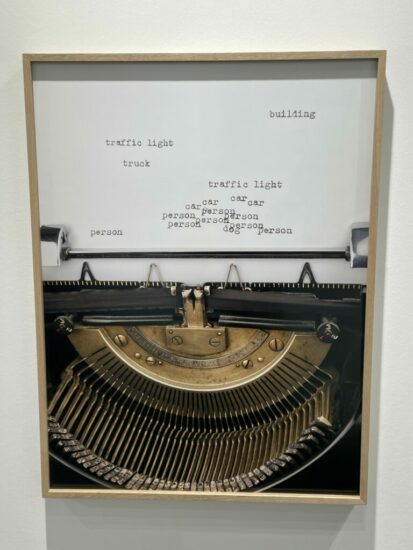 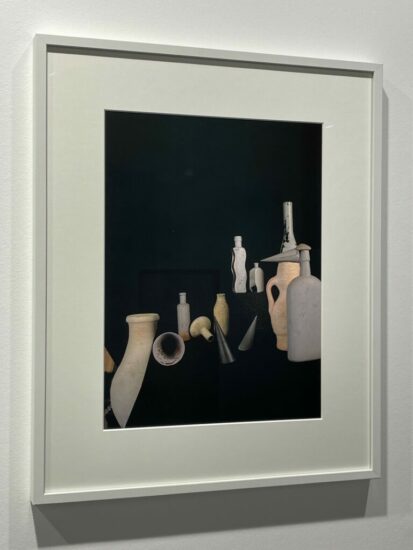 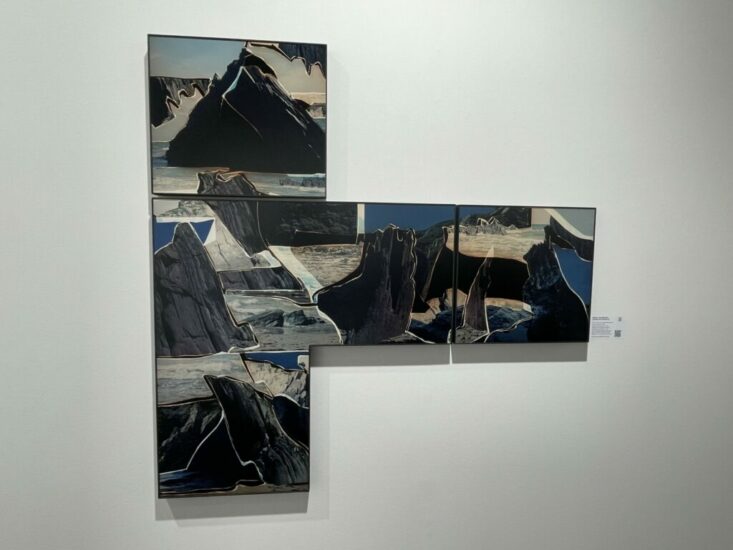 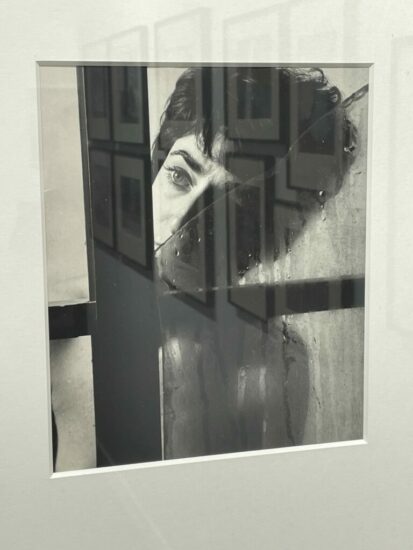 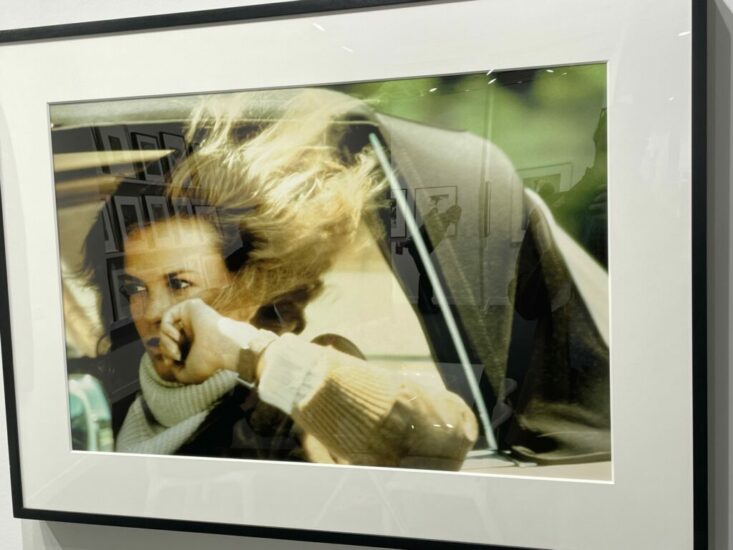 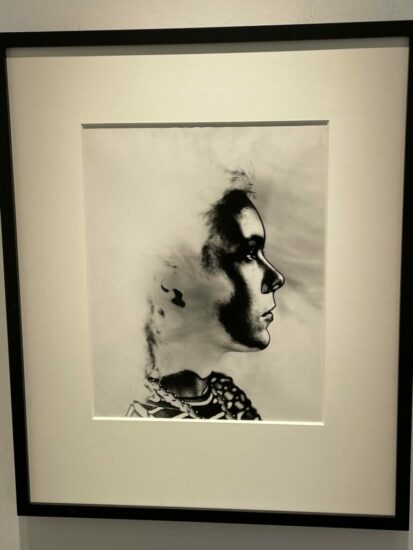 Einspach Fine Art & Photography (here): This booth was a solo presentation of the work of the Hungarian artist Orshi Drozdik. Taking a feminist approach to the body, works from this 1979 series performatively project pornography onto female bodies, with the resulting images cut into fragmented strips that refuse to resolve into recognizability. The tangle of shadowy limbs and fleeting faces is filled with twisting repetitive movement, breaking down into impulse. Priced at €13500.

Robert Mann Gallery (here):This 1930 image by Ringl+Pit is deceptively complex, with the couple resting on the grass reoriented into a tightly layered arrangement of textures, patterns, and tonalities. Polka dots and three different kinds of stripes add complexity via the clothing, and the bushy grass, the dark hair, and the contrasting skin tones further complicate the scene. And the man’s head, turned nearly upside down, almost looks like a mannequin, his fingers echoing the stripes nearby. This is a photograph that gets better the longer you look at, with more and more of the interleaved details slowly revealing themselves. Priced at €9500.

Robert Mann Gallery (here): 1930s advertising still lifes have a sleek style all their own, and this setup of pipes by Elisabeth Hase feels crisp and modern. The shiny pipes are placed at angles against a textured metallic backdrop, the light bouncing off the black forms creating bright flares. Even thought the arrangement is static, there is undeniable energy in this composition, and the subtle brand name EXTRA seems fitting. Priced at €13000.

England & Co. Gallery (here): This mid 1970s performance by Anne Bean featured a glass sheet doused with gasoline which Bean posed behind after it was lit. The fire jumps and distorts her face, the interruptions seemingly poured atop her, blown from her mouth, or emerging from her fingers like dark magic. Bean went on to distress the prints chemically, creating additional layers of crackly scorched tonalities. Priced at £22000 and reserved.

Jecza Gallery (here): This intricately textured sand swirl was made by the Romanian artist Doru Tulcan in the 1980s. At that time, Land Art wasn’t particularly known (or even permitted) in his home country, so Tulcan’s sculptures mixing nature with higher level mathematics and physics were particularly innovative. The sand seems to undulate with precision, like a carefully raked Japanese rock garden disrupted by a tunneling beast. Priced at €14000.

Hans P. Kraus Jr. Fine Photographs (here): This candlestick photograph by Dora Maar was made in 1980, so much later in her career than we might normally expect. Its distorted simplicity has a quiet charm, the gestural sweeps of indistinct black interrupted by the brightness of the blurred central form. Priced at $12500.

Galerie Gilles Peyroulet & Cie (here): This 1939 Surrealist image by Raoul Ubac (as seen in a larger than usual print) is filled with swirling, dissolving uncertainty. A ghostly nude form seems to emerge out of the chemical clouds, the sandwiched effects intermingled with supernatural and eerie wonder. Already sold.

Galerie Gilles Peyroulet & Cie (here): The sweeping bends of rope on the slatted dock in this 1938 Pierre Jahan picture are satisfyingly ordered. As seen in an extra large print, the clarity of the lines is even more pronounced, like repeated looping calligraphic gestures piled atop one another. Priced at €20000.

Galerie Gilles Peyroulet & Cie (here): This 1928 image by Germaine Krull was part of her landmark portfolio Métal. Here the underside of a bridge becomes expressively abstract, the repeated lines of light and dark transformed into dense staccato rhythms. Priced at €26000.

Flowers Gallery (here): The interlocked layers of drapery attracted me to this recent work by Esther Teichmann. A canoe with a makeshift sail provides the centerpiece of the arrangement, with the flattened textures of the various sheets creating a delicate sense of roiled context. Priced at €6500.

Augusta Edwards Fine Art (here): This Graham Smith image has a subtle undercurrent of mystery – the man standing on the sidewalk near the bridge seems somehow more brightly lit and crisp than his surroundings, almost like our perspective in seeing him is slightly more underneath. A close look at the work reveals that it is actually a painstakingly constructed collage, with the man inserted into the scene later, the setup both plausibly convincing and slightly uneasy. That tension is unexpected, especially when delivered by such a bluntly unimpressed character. Priced at €24000.

Toluca Fine Art (here): Miguel Rio Branco is known for being a master of color, and these moody nighttime images from 1973 show why. Seething areas of red and blue animate the night, with a hint of narrative provided by some lingering figures, a jukebox, and the intruding shadow of a horse. Priced at €30500 for the set of 4 prints.

Toluca Fine Art (here): This 1988 scene from Mexico by Pablo Ortiz Monasterio has a grimly dystopian atmosphere. Between the choking dust, the hulking buildings in the background, and the broken poles lying on the ground, the tactile study feels altogether end-of-the-world. Priced at €5200.

Klemm’s (here): Smart conceptual thinking about the nature of photography underlies this new work by Viktoria Binschtok. An unseen-to-us photograph has been fed through an app and turned into an arrangement of words (and typed out on an anachronistic typewriter), leading us to imagine the scene based on the available information. Is this picture of traffic, cars, buildings, and a cluster of people a sidewalk scene in New York? Maybe, or maybe not, and that uncertainty of interpretation gets at the heart of the work’s intelligence. Priced at €6500.

Klemm’s (here): This still life arrangement by Jan Groover was made in 2004, so later in her long career. From a few steps back, the inky blackness of the backdrop drops to an essentially undefined void, with the objects almost floating untethered. Groover was a master of precise setups, so nothing here was arranged by chance, not the look straight into the cone, not the edge of the studio visible in the lower left corner, not the line of black that cuts across the jug at the bottom, not the rock and cone perched on top of the bottle and jug on the right. We’ve seen many of these objects before in other still lifes over the years, but now their surfaces are a bit scratched, broken, and flaked, giving the work a sense of recognized aging. Priced at €12000.

TOBE Gallery (here): This shaped work by Dafna Talmor extends the aesthetic ideas found in her excellent 2020 photobook Constructed Landscapes (reviewed here). Talmor made a three dimensional, box-like sculptural expression of her work for an installation at the Unseen art fair, which has then led her back to the idea of shaped frames. In this form, the relayered negatives can expand into different arrangements of space, both up and down and out to the sides, further changing the dynamics of the reimagined land. Priced at €8000.

Charles Isaacs (here)/Grégory Leroy (here): This image by Kati Horna from her 1962 series “Paraísos Artificiales” intermingles aesthetic hints of Surrealism and seemingly the 1960 Alfred Hitchcock film Psycho. The view from behind the shard of wet broken glass feels horror movie vulnerable, like waiting for the inevitable next round of creepy intrusion. Priced at $12000.

Staley-Wise Gallery (here): The 1970s are flowing freely in this classic fashion image by Arthur Elgort. Made for Vogue in 1978, the stylish sweep of the woman’s hair and the arm-out-the-window pose feel confident and liberated, capturing the understated glamour of the moment. Priced at €15000.

Robert Koch Gallery (here): The solarization in this 1958 portrait by György Kepes gives it its haunted ambiguity. Between the dark edge and the dissolving back of the head, the woman’s face peers out from a flare of obscurity, delicate but certainly dreamlike.

Part 4 of this report can be found here.