My first trip to Paris Photo as a photography collector and writer came a decade ago now in 2013, and so aside from the interruptions of the pandemic, I’ve made a decent number of arguably systematic attempts to summarize what can be found in its many booths. Such reports aren’t “reviews” or “criticism” in the traditional sense of those words, but instead edited gatherings of notable pictures, designed to give both the reader from afar and the recently returned attendee a glimpse of what caught my particular eye.

Over the years, I have applied several different structured filters to sift through the avalanche of photography on display, from choosing just one work to feature from each and every booth at the fair to selecting only works made by female photographers. Most often, I have winnowed the fullness of the fair down to a smaller group of highlights, whose selection criteria might have checked any one of a number of boxes in my head, including new works from well known photographers, unexpected vintage rarities, discoveries of photographers new to me (both old and new), and more generally, photographs that seemed to merit (or indeed require) a further round of thinking. For those that have followed along these past years, there are surely other patterns to be found in both the works I have featured and those I have not, making the whole exercise something quite a bit less than entirely objective or even-handed. Perhaps these summary reports are best thought of as serendipitous guided tours through the complexity of it all, with hopefully worthy stops, detours, anecdotes, and observations offered along the way.

With renovations to the Grand Palais now scheduled for completion in 2024, Paris Photo has settled into year two of its temporary home at the Grand-Palais Éphémère (front and back views below), with a degree of continuity now visible from last year’s initial adaptation to the space. We’re now familiar with the thick T shape of the general arrangement, and many of the galleries (and publishers) have staked out the same locations as last year, creating a degree of physical predictability and memory matching in the aisles.

The slideshow below and the ones that follow (for a total of 4 parts this year) bring together my image highlights from the 2022 fair, starting with Section A (nearest to Place Joffre) and working through to Section F and the Curiosa and Special Exhibits areas in the center and bottom of the T. And like all our art fair reports, every photograph (or group of photographs) in each of the slideshows is annotated with the linked gallery name, the artist’s name, some discussion of the work itself, and the price (aside from a few cases when a work was already sold, on reserve, or on display in a non-commercial setting, and the price was unavailable). 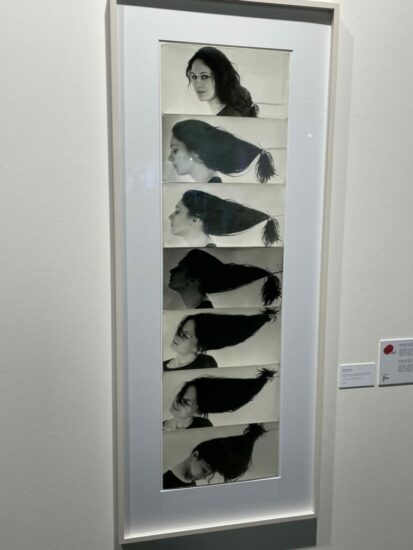 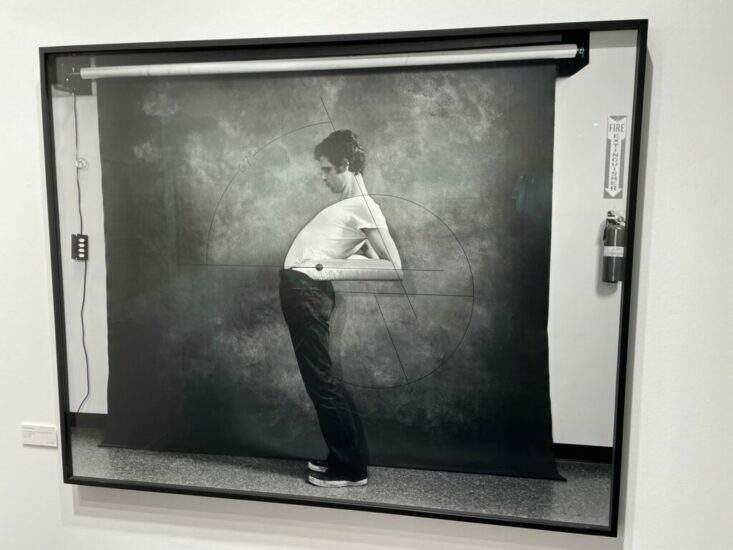 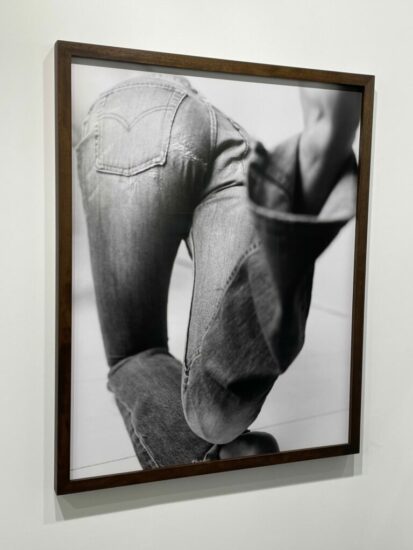 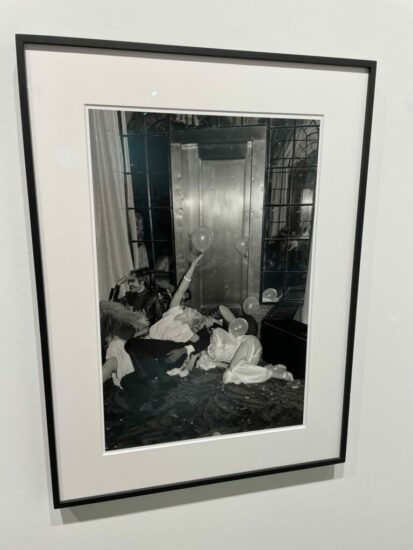 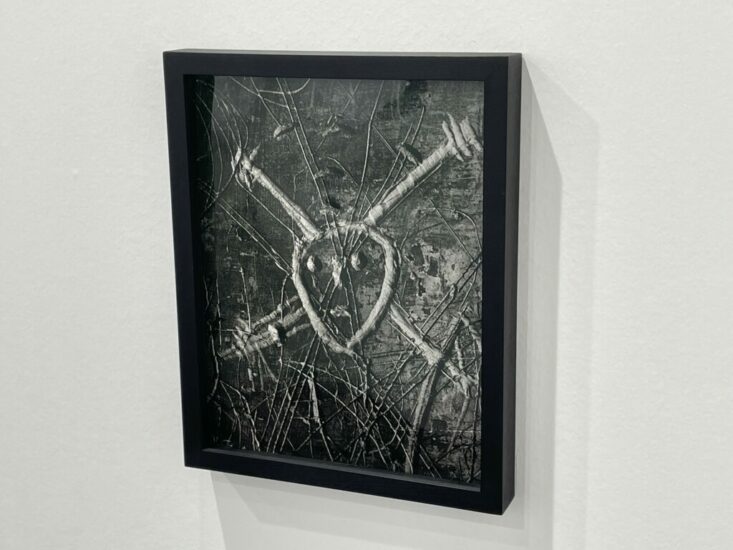 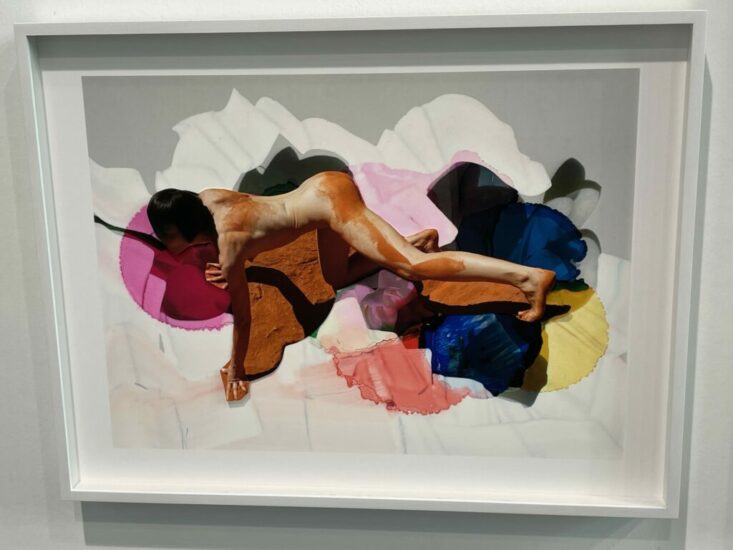 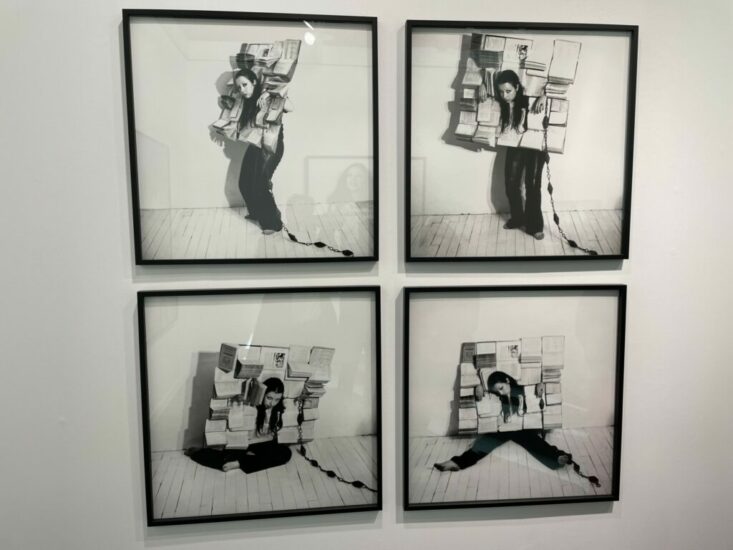 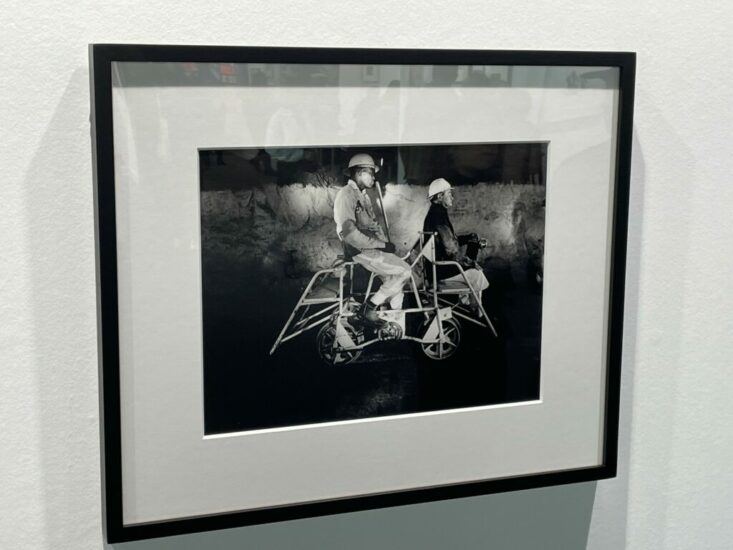 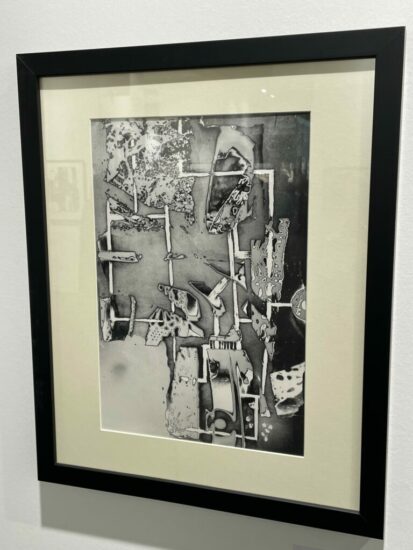 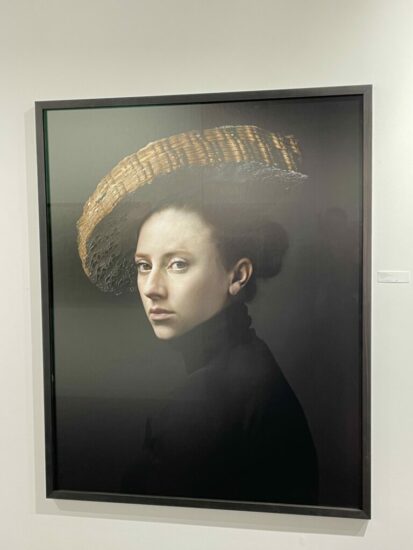 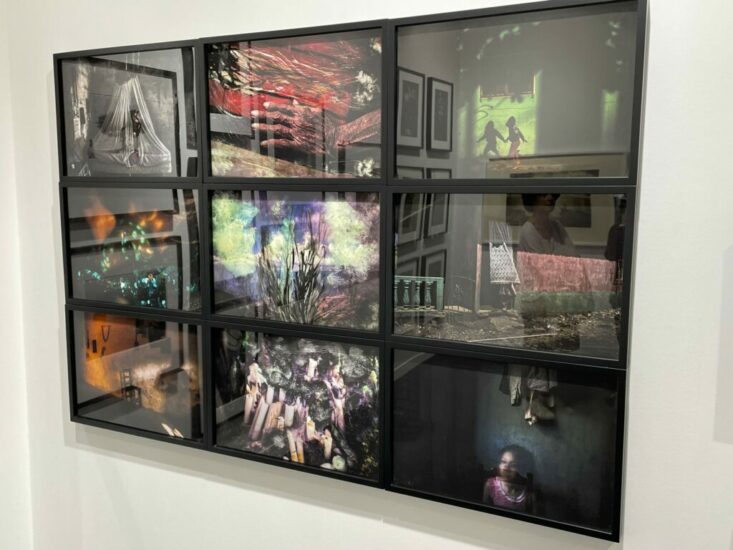 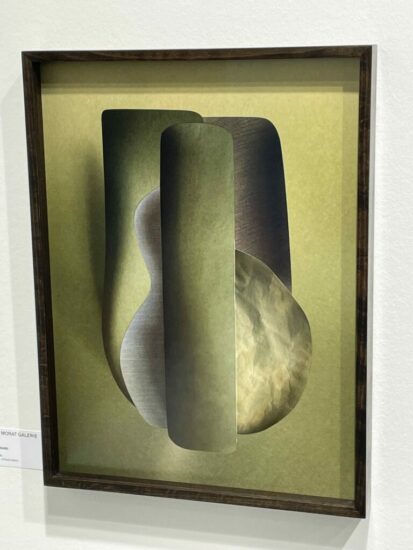 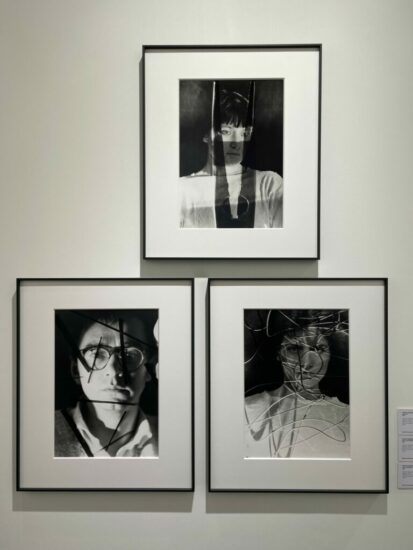 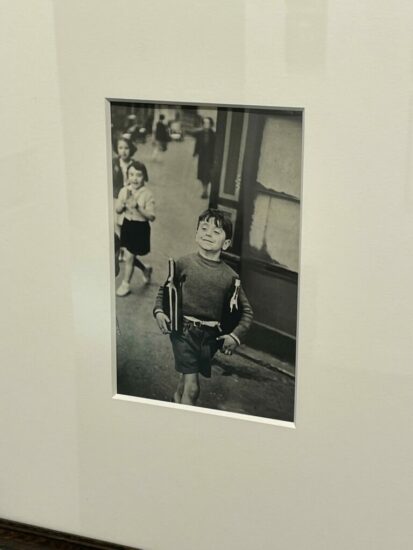 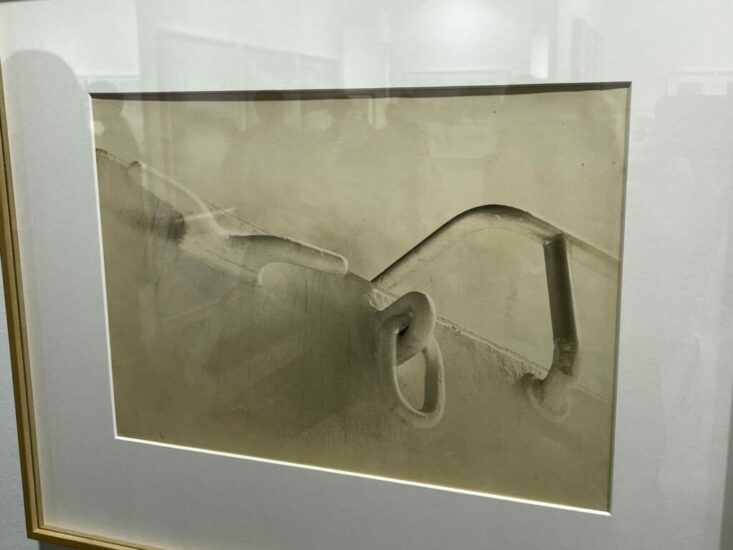 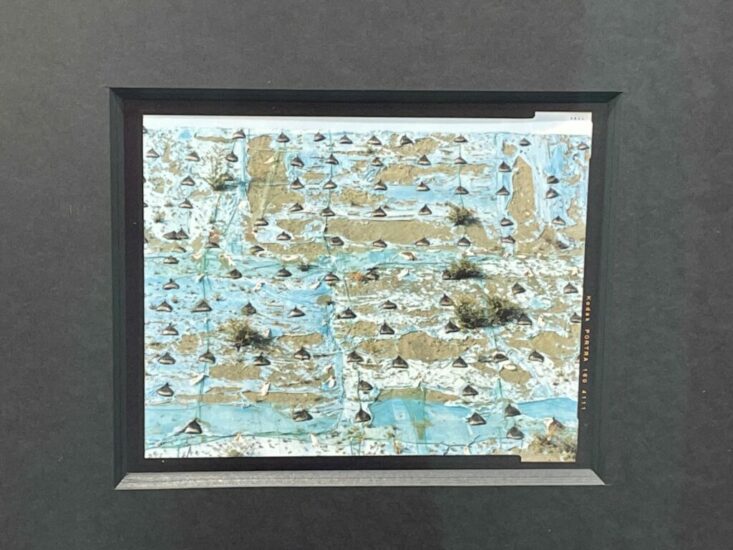 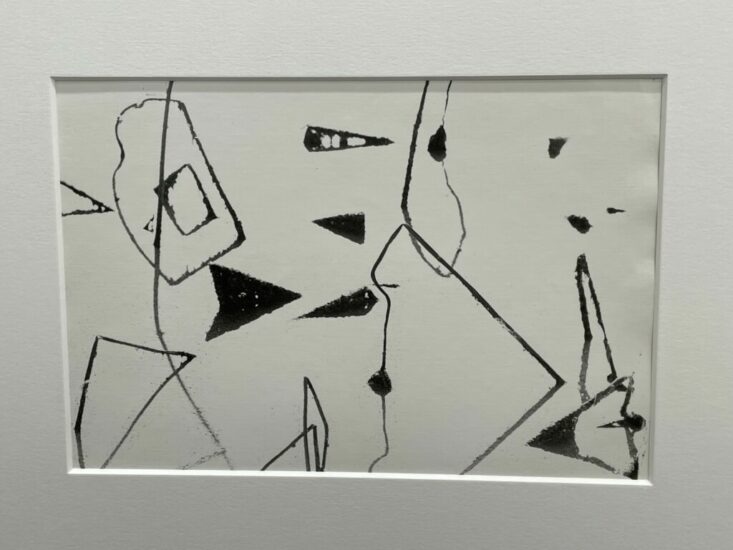 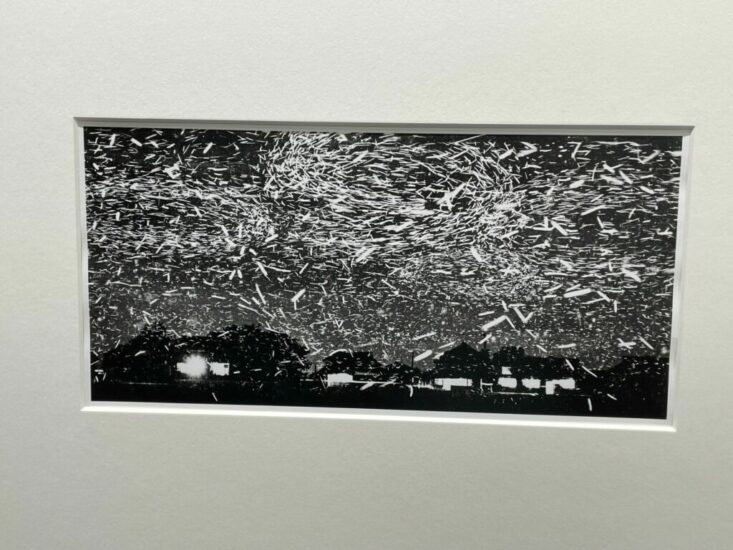 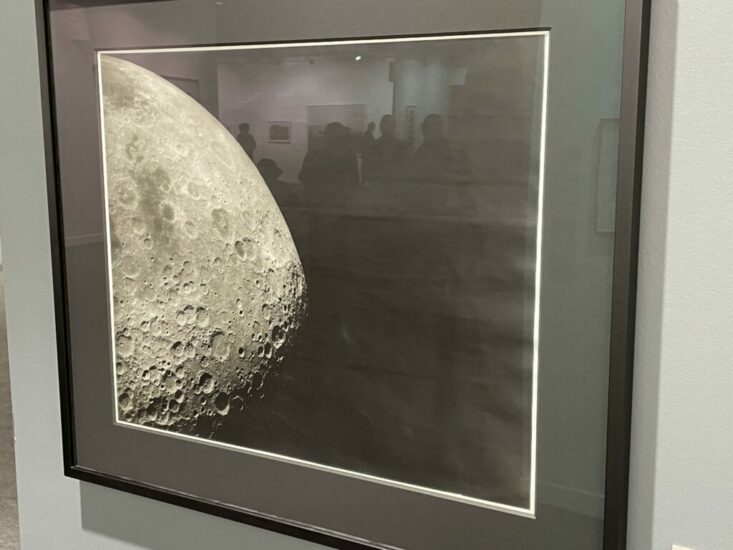 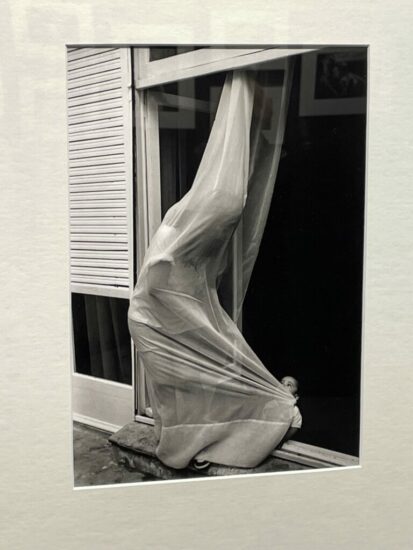 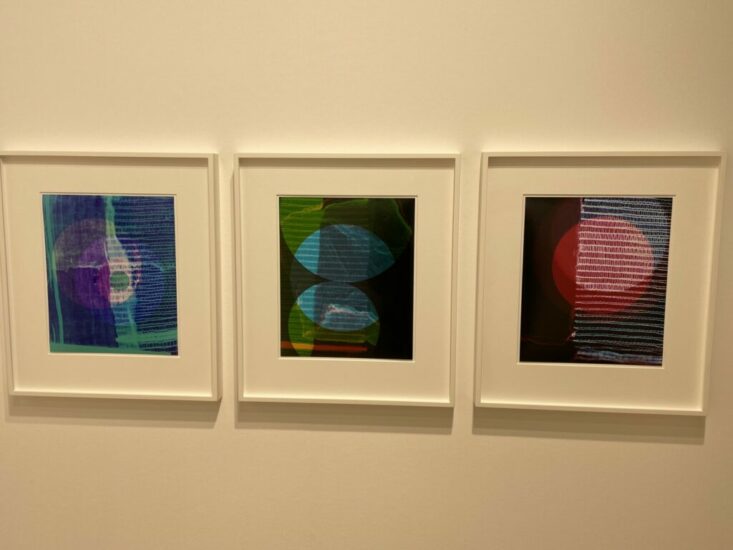 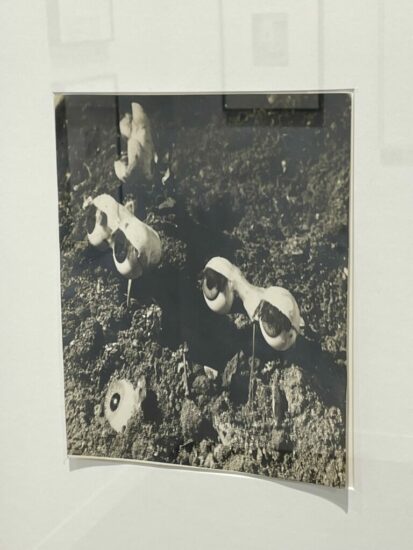 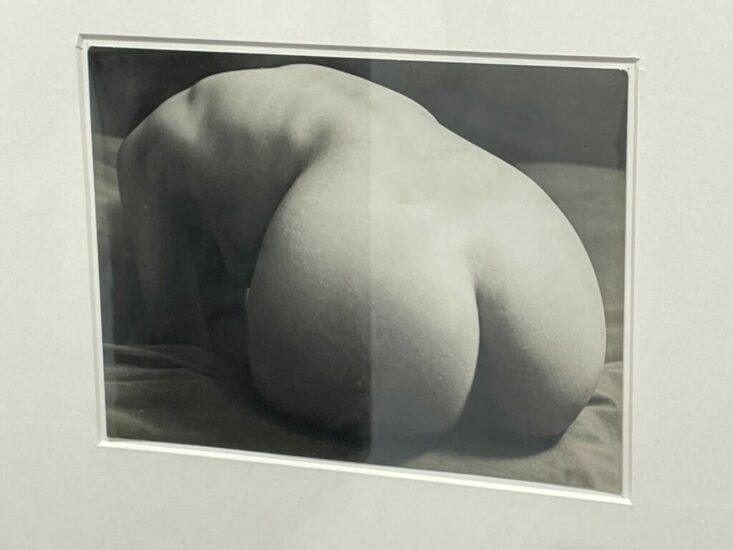 Galerie Loock (here): This 1984 sequential hair pulling work by the East German artist Gabriele Stötzer was originally designed to be a leporello, so it could be easily folded up to avoid detection by the secret police. Known for her confrontational and sensual feminist views, super-8 films, and performances, Stötzer was rightly wary of the responses her often provocative work could generate; she had been jailed earlier in her career and state-permitted gender roles in the GDR didn’t exactly align with the patriarchy-breaking ideas she was exploring. She would keep the pressure on a few years later by initiating an occupation of the state security offices. Priced at €13500.

Webber Gallery (here): This recent work by Senta Simond features an unlikely kicked back view of legs in jeans. It’s a more anonymous approach than she’s taken in the past (there is no face to be seen), but the movement still generates plenty of energetic compositional uncertainty. Priced at €8500.

Galerie Thomas Zander (here): This 1978 print by Tod Papageorge comes from a broken up version of his “New York Nights” portfolio. It’s a classic view of Studio 54 after party decadence, featuring tangled passed out bodies, lazy balloons, broken glass, and the edge of a feather boa. Priced at €15000.

Galerie Karsten Greve (here): Brassaï made dozens of images of graffiti over several decades, but this picture does more than simply document the lucky discovery of a stylized skull and crossbones. It’s the additional arced lines and curves that slash through the composition that give the photograph its intensity – their thin tactile trails are almost more interesting than the central figure itself. Priced at €55000.

Stevenson Gallery (here): This work from Viviane Sassen comes from a new series called “Modern Alchemy”. Here one of Sassen’s earlier images (of one of her favorite models and muses Roxane) has been collaged together and rephotographed, adding gestural painting and ink blotting to the mix. The results are elegantly shifting and uneasy, like climbing over colored clouds. Priced at €9000.

Ceysson & Bénétière (here): This booth was a solo presentation of works by the French feminist artist ORLAN. In this 1976 series, she weighs herself down with a straightjacket of books, ultimately buckling under the weight of a traditional education. Her body (and bold eyes) enable a kind of performative sculpture, her arms imprisoned in a stockade of fluttering pages. Priced at €14000 each or €45000 for the set of 4 prints.

Goodman Gallery (here): This booth paired mining imagery from David Goldblatt and Alfredo Jaar, putting 1970s South Africa in dialogue with 1980s Brazil. In this image by Goldblatt, the divisions of apartheid are made physical and literal, with the Black team leader pedaling the car which carries the white mine captain. Priced at €30000.

Photon Gallery (here): This mysterious 1960s abstraction by Jaroslav Rössler never quite reveals itself. Crackled negatives, scraped lines, and other unidentifiable fragments are tied into a network of sorts, with warps and flares seeming to amplify the visual noise. Priced at €11000.

Flatland Gallery (here): For nearly two decades, Hendrik Kerstens has been making portraits of his daughter that playfully mimic the visual codes of 17th century Dutch painting. In this brand new work, a layered cake stands in for some kind of jaunty tilted hat, with his daughter’s penetrating gaze all the more mature and engaged with the passing of the years. Apparently she now has a child of her own, who may also begin to appear in these carefully orchestrated setups. Priced at €28000.

Patricia Conde Galería (here): This grid of works by Yael Martínez mixes images from his series La Casa Que Sangra (reviewed here as a 2019 photobook) with other works from projects on the lives of migrants and indigenous peoples in a Mexico ravaged by drug cartels. Several of the photographs have been etched with gestural acid washes, breaking down the darkly expressive colors even further. Priced ranging from $2500 to $3800 each, depending on the place in the edition.

Robert Morat Galerie (here): This collage by Hannah Hughes starts with scavenged images from magazines, but then builds them up into layered forms using complex lighting and thin physical supports. The results have a pleasingly convoluted sense of depth, with shadows and volumes that don’t always align. Priced at €4100.

Parrotta Contemporary Art (here): These three portraits from the early 1980s by Pidder Auberger all use photogram techniques and image layering to interrupt shadowed headshots. The results (including a self portrait) feel haunted, with faces clashing with encroaching textures. Other works on view in the booth provide examples of his wide experimentation with cliché-verre and woodcut techniques. Priced at €3600 each.

Stephen Daiter Gallery (here): This Henri Cartier-Bresson image of the self-satisfied boy carrying wine bottles down the Rue Mouffetard is a 20th century photographic classic, but I can’t say that I’d ever actually seen a vintage print of this otherwise ubiquitous image until now. In this form, it’s much warmer toned and generously tactile than the other versions that continuously circulate through the market. Priced at $145000.

Galería RocioSantaCruz (here): Marcel Giró was included in the recent Brazilian Modernism show at MoMA (reviewed here) and this study of nautical forms is a another solid example of his work from the 1950s. Here the elemental white forms of cleat, ring, and handrail are reduced to simple geometries and tactile surfaces, with a twist of vantage point to add angular interest to the composition. Priced at €20000 and already sold.

Polka Galerie (here): This 2021 print from Toshio Shibata finds the Japanese photographer continuing to explore the formal possibilities of man-altered landscapes. What looks like blue netting is draped across a hillside, perhaps to prevent erosion of the dirt underneath; the resulting view is regularly spotted and interrupted by bags of sand and tufts of greenery, creating a hybrid scene of controlled intervention. Priced at €1500.

MEM (here): What exactly are we seeing in this seemingly abstract image by Koichi Sako? It’s hard to say. In a post atomic bomb world of 1950s Japan, Sako was interested in finding poetry in the disturbed land, and he titled this image “Caricature of Dead Leaves”. My guess is that it might show us some kind of reflections in water, blasted into high contrast tactility; whatever it is, the composition is elegantly poignant, almost like an expressive ink drawing. Priced at €5300.

MEM (here): Fireflies swarm in the air in this 1957 work by Yoichi Midorikawa. Likely a combination of long exposures and layering of multiple images, the effect is almost allegorical, like an overwhelming but somehow glorious invasion of night in the countryside. Priced at €6900.

Daniel Blau (here): This unbalanced view of the far side of the moon from 1969 pushes a NASA scientific effort into the realm of the quietly expressive. Of course, the details of the cratered surface draw us in, but it’s that deep expanse of darkness to the right (and the defined edge of the moon it carves out) that feels more durably mysterious. Priced at €17000.

Rolf Art (here): This booth was a solo presentation of the work of Adriana Lestido, with various projects centered on the relationships of mothers and daughters. This image comes for a series on adolescent mothers, and aside from the graceful swirl of the curtain, the metaphor of mother tied up by the demands of the child (however playful) feels accidentally insightful. Priced at €10000.

Fraenkel Gallery (here): For a reissued version of her first book Woolgathering, Patti Smith invited several artists to contribute potential images to accompany the texts. In the end, a group of 13 color photograms by Christian Marclay were chosen by Smith for the Arion Press release. Three images were left out of that grouping, perhaps because their inclusion of unraveling linens and other woven fabrics seemed too literal, given the title. In any event, those three photograms are now available as a set of prints, with Marclay’s signature vinyl record motifs mixed together and overlapped with the textile elements. The works seethe with energetic color, but also wander off into the intricacies of pattern and meshed line. Priced at $40000 for the set of 3 prints.

Galerie Françoise Paviot (here): This surreal 1930s eyeballs-in-the-dirt image by Dora Maar is likely unique, with a variant cropping included in a different montage work. The long eyelashes give the eyes an even stranger hint of personality, like disembodied spectators watching us. Priced at €45000.

Galerie Françoise Paviot (here): Seemingly curved like carved stone, this 1933 Brassaï nude was only ever printed once before the negative was damaged, making this work unique. While Modernist nudes by male photographers may have fallen out of favor of late, place this with a Brancusi sculpture from the same period and the formal refinement will feel the same. Priced at €25000.

Part 2 of this report can be found here.