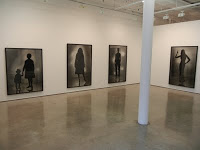 Comments/Context: Japanese photographer Yuki Onodera’s accomplished first solo show in the US brings together works from two recent projects and thoughtfully explores questions of identity via layers of intricate process. In both series, a straightforward idea is made more complex and nuanced by the introduction of an inversion, where what we expect is subtly undermined. 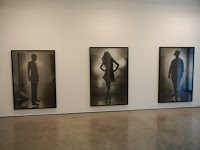 In the Transvest project, life-sized black silhouettes hover against lit grey backgrounds, offering easily identifiable stereotypes and clues: the cowboy, the sexy young girl, the mother and daughter, the urban youth, even Fred Astaire. From afar, they look like simple cut-outs of familiar outlines, but up-close, it becomes clear that each person is covered in mottled, shifting pinpricks of light. Get right next to the print and you can often identify a swirling mass of shadowy appropriated imagery, covering the bodies like dissolving tattoos: architectural interiors, flowers, a waterfall, trees, a chandelier, even a skeleton. It becomes clear that these figures are not types, but individuals with broader, more complicated stories made up of surprising component parts, many facets of their personalities hidden just on the edge of visual comprehension.

My first reaction to the works from the Eleventh Finger series in the back viewing area was that there was a strong echo of Baldessari in them, as both employ figures made anonymous by obscuring their faces with an unexpected, out of context blob, almost like a thought bubble. The difference here is that Onodera has used elaborate cut paper photograms that resemble lacy doilies to do her covering: intricate, graceful patterns of fish, flowers, and vaguely Asian geometric dots and dashes that subtly match their wearers. There’s also an interesting contrast of textures going on, with the pure flatness of the cutouts juxtaposed with the graininess of the black and white photographs. What may sound like an odd combination is actually quite effective and elegant.

In both projects, it felt like Onodera was starting with images of empty human vessels and then filling and altering them with details introduced via various photographic processes. I liked this connection between the two series, even though they were executed in remarkably different ways. To me this is evidence of mature forethought, of starting with the underlying ideas and then developing original ways to articulate them, without regard to a common aesthetic framework. All in, I came away wanting to see more. 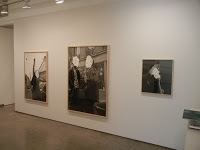 Collector’s POV: The works in this show are priced as follows. The prints from the Transvest series are all $24000 each, although several are marked NA on the checklist. The prints from the Eleventh Finger series are either $7500, $9500, or $17500, based on size. A sprinkling of Onodera’s prints have reached the secondary markets in the past decade, fetching prices between $1000 and $7000, but I wouldn’t say this data is particularly representative of her more recent work. As such, I think gallery retail is likely the only option for interested collectors at this point.

My favorite image in the show was Rosa, 2009; it’s the middle image in the middle installation shot. In this image, the sparkly details on the body are a bit more identifiable, with a string of riverfront lights and bunches of exotic jungle leaves running across her silhouette. I also thought it might be fun to pair one of these with a similar sized Robert Longo.

Yuki Onodera
Through May 28th