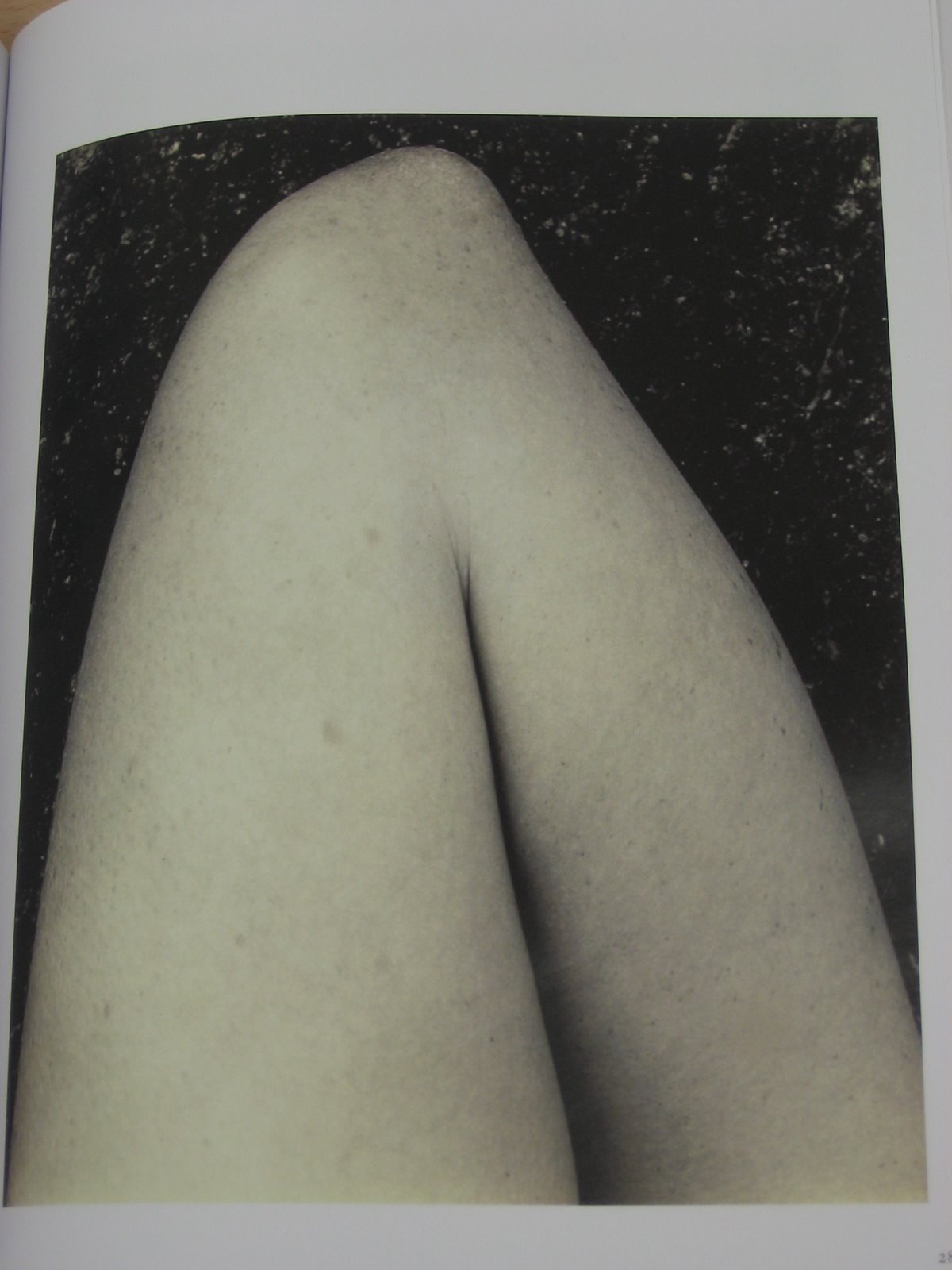 A reader posted an insightful comment on the Edward Weston, Elbow, 1935, (poor image at right, taken from the catalog) from the recent Christie’s sale (original post here) and I wanted to take a moment to explore this image a bit more, as well as talk a bit about collectors working together. This print was estimated between $90000 and $120000 and did not sell.

Let’s start with some background. Here is a snippet of the text from the Christie’s catalog, describing this lot:

“Elbow is, then, rather a curiosity. If any other prints exist of the image, they are certainly few in number. It is not in the collection of The Center for Creative Photography and is unillustrated in the usual documentary sources. It is however a masterpiece…”

Then yesterday, in gallerist Alex Novak’s E-Photo Newsletter #150, in listing a bunch of lots that passed at Christie’s, Alex wrote the following:

Then last night, we had an anonymous comment from a reader here on our blog:

The following is from Amy Conger’s authoritative catalogue on Weston’s work from pp. 28-29 of the biography. “That spring [1935] he began a new venture, the ‘Edward: Print-of-the-Month-Club.’ Camera Craft, ran a note on it explaining that although prints by him usually cost $15 or $20, it would be possible for only $5 a month to subscribe for a year to this club ($50 if paid in advance). Each month the subscribers would receive a new print by Weston; the total edition of each print would be limited to forty, thirty-five for subscribers and five for the photographer. Weston probably got no more than eleven subscriptions. Twelve monthly EWPOMC prints were issued, although the date he actually began or the exact order in which he sent them out is unknown. Today these prints are recognizable not only because of the edition numbers written on them but also because they were consistently exquisite.”

By consulting the footnotes to this text and cross-referencing with the Edward Weston Negative Log (there is a photocopy of this from the Weston Archive housed at the Center for Creative Photography in Tucson), it can be deduced that this print of the elbow is from Weston’s negative 208N which is of Charis in 1935, and that other EW Print-of-the-Month-Club prints of this negative are to be found in the collections of Indiana University Art Museum, MoMA, Norton Simon Museum and SFMOMA.

So, a few thoughts on this dialogue. First, Christie’s doesn’t seem to have done their homework on this lot as thoroughly as it might have, but was willing to engage in the usual salesmanship in favor of the print (buyer beware). Second, I too looked at this print out of the frame, and as Alex noted, it was a bit yellowed and the mount was lightly foxed. I agree with him that it was significantly overestimated, especially given the prices of other abstract nudes from this series/time period.

Finally, I want to touch on the idea of “open collecting” once again, especially in the context of this lot and what the back and forth above represents. It is our view that being open about what we are doing as we journey along the collecting road enhances our enjoyment of the process. Thus we have placed our entire collection up on the web and started this collector-focused blog. We don’t believe that collecting must by nature be ruthlessly competitive (perhaps this is idealistic we realize) and that our ability to find the best material for our collection will somehow be compromised by making our activities known. In fact, we believe the opposite, that over time, being open will bring better quality material to our attention because more people will be aware of what we’re interested in (an economist might call it signaling).

The world of photography is full of experts, from gallery owners and dealers, to auction house specialists, to other collectors, all of whom have detailed knowledge that can be shared and leveraged. If we can get some of them to come out of their shells just a bit and share some of their specific knowledge (even anonymously like the comment above that drove this post), we will all be better informed and make better decisions.

I am heartened to see that there are people out there who continue to do detailed detective work (even after the sale) and who bring a serious and thoughtful level of scholarship to this medium. It is our hope that this blog can be a place where all of these voices can be heard (even when they disagree), so that we can learn from and leverage this collective knowledge. At least for us, more information makes collecting more fun.

So keep the comments coming, as we will all benefit. On our side, as we post, we’ll redouble our efforts to keep the level of commentary both hype free and content rich, and we’ll ask a few more open ended questions, hoping to entice some answers from the lurking crowd. And if there is more to this specific Weston story, beyond where we are now, by all means, let us know.