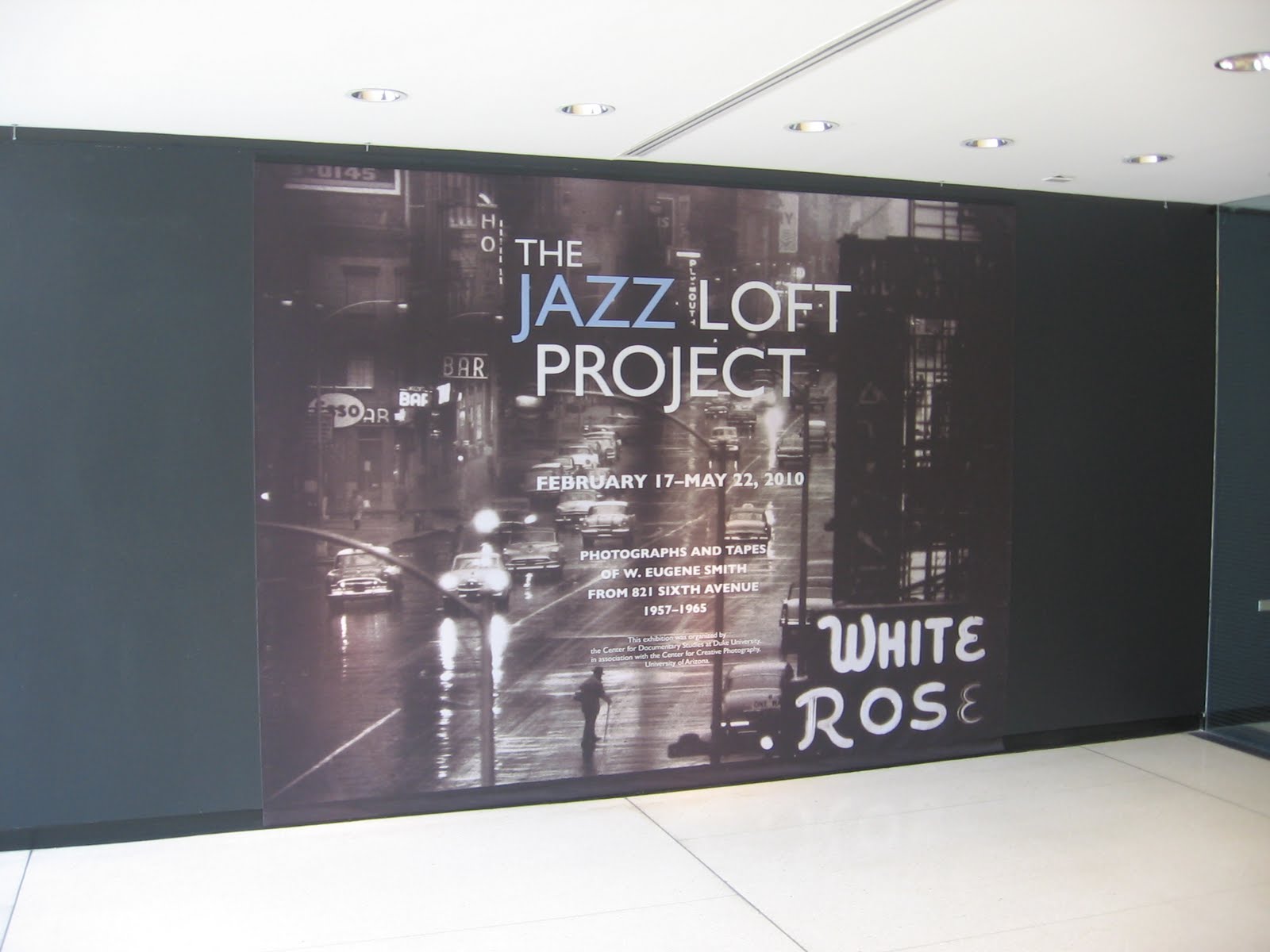 JTF (just the facts): More than 200 images, mostly framed in black and variously matted, and hung against dark blue walls in a large ground floor gallery space. A few prints have been enlarged significantly and mounted without frames. Many of the images on display are proof prints, and are generally small in size (roughly 7×5 or 6×4); others are printed somewhat larger in a more “final” print style. At the back of the exhibit, there is a large video screen showing outtakes of Smith working, and 6 smaller screens playing episodes of the Jazz Loft Project series. There are 4 glass cases housing reel to reel tapes and Smith’s recording equipment, various equipment cases, Smith’s telephoto lens, and a selection of LIFE spreads, as well as 2 listening stations where visitors can select from a variety of recordings and conversations. 8 large banners hang from the ceiling, depicting tape boxes covered in notes. A well-researched monograph of the project, written by Sam Stephenson was published by Knopf in 2009 (here). (Unfortunately, no photography was allowed in the exhibit; therefore, there are no installation shots for this show.)

Comments/Context: When I think of great neighborhoods for photography in New York, the Upper West Side is not one that I think of at all; there are virtually no venues, either public or private, that show photography on a regular basis. As such, any show on the Upper West Side offers little in the way of “clusterability“, that important quality which allows visitors to string together a bunch walkable visits to closely located sites. I think this is the reason why it has taken me so long to get to see this exhibit; it ultimately required a special trip. The surprisingly good news is that this show, tucked back in the out of the way New York Public Library for the Performing Arts (at Lincoln Center), is undeniably one of the best photography shows of 2010.

You’ve probably heard the back story to this project somewhere else already, but here’s the synopsis. Famous photojournalist, war correspondent and LIFE photographer, W. Eugene Smith left his family and his job and took up residence in an abandoned “cold-water” apartment building in the Flower District (28th Street and 6th Avenue). For the next eight years (1957-1965), this building became a casual mecca for jazz musicians, composers, and hangers on, and Smith took nearly 40,000 images and 4,000 hours of audio tape of nearly everything that occurred inside and outside the building, at all hours of the day and night, as jam sessions and impromptu meetings took place. The result is a truly amazing visual and auditory record of the people, the music, and the time period.

Jazz obsessives will of course revel in all of the musical detail in this exhibition, from the countless recordings of some of the biggest names in the community (both playing and talking, heard as background to the exhibit and via several headphone stations), to the marked up boxes of now-ancient recording tape (close-up images, hung as large banners throughout the display). But it is Smith’s black and white photographs that really bring the story to life.

While the pictures are hung mixed together on the walls, there are really only two bodies of work in the show: jazz musicians inside the building, and life on the streets outside. The shots of the musicians, either playing or just hanging out, have no trace of posing or staging; Smith seems to have been routinely ignored by his subjects, allowing him to capture moments of intense expression and calm quiet. There are dark, moody portraits of Thelonious Monk (wearing a porkpie hat) playing the piano and smoking, Roland Kirk playing two horns at once, and countless others (Bill Evans, Albert Ayler, Zoot Sims, Charles Mingus etc.) often photographed as fragments of a cymbal, or a hand, or lips blowing. Many were taken in the thick of the action of playing, where eyes are closed and cheeks are blown out; others document the pause between sessions, where the excitement ebbs and a player sits lost in thought, often in silhouette. Given that most of the sessions took place at night, many of the works are drenched in shadows, flanked by darkened windows. There is even an unexpected self-portrait of the artist, reflected in the flare of the bell of a horn.

Smith also used an ungainly 300mm telephoto lens (seen in a glass case) to take shots out the window of the building, documenting the comings and goings in the street below. These bird’s eye photographs have been grouped into short series and vignettes: people carrying flowers, fire escapes, garbage trucks, curves of cars, pedestrians, delivery trucks, umbrellas, rainy streets, firemen, white chairs in a truck, white lines on the street, snow falling, footsteps in the snow. These scenes have an elegant simplicity, where a single gesture or angle makes the whole composition exciting. It is the consistency of these pictures that is most surprising; in image after image, Smith turns the motion of the street into a balanced and sophisticated ballet – a woman’s leg bends out of a car door, a man carries a bunch of flowers in the snow, a cat balances on a window frame, cart tracks make straight lines in the slush. Several are even taken through a ragged hole in a tar-paper covered window, creating a jagged black tunnel, with the action taking place in the middle.

This exhibit really transformed my perception of Smith and his photography. Rather than the concerned documentary photographer of WWII or Minamata, or the staff photographer for LIFE of the Country Doctor (and countless other well known photo essays), here Smith is taking pictures on his own terms, still very much performing a kind of embedded photojournalism, but in a much more eccentric and personal way. Smith got much, much deeper into this story (it was his life after all), and as a result, the pictures have an intimacy and authenticity that is hard to match.

All in, this is a fantastic show, deep in its scholarship and compelling in its imagery, and well worth a detour from the well worn artistic ruts of the usual New York neighborhoods.

Collector’s POV: I couldn’t determine if there is any one gallery that officially represents Smith’s estate in the private markets; many vintage dealers carry representative samples of his work. His archive can be found at the CCP in Arizona. At auction, Smith’s prints are generally reasonably priced, ranging from $1000 to $50000, with his famous image The Walk To Paradise Garden drawing all of the prices at the top end. After seeing this show, I have come to the conclusion that many city scene collectors who have previously overlooked Smith might find quite a bit of interest in this body of work; there are intriguing echoes of NY Kertesz and Frank’s bus images in particular. Of course, collectors of jazz portraits will also find much here to enjoy.

The Jazz Loft Project
Through May 22nd