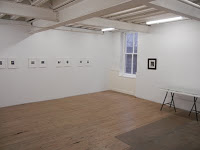 JTF (just the facts): A group show consisting of 37 works by 14 different photographers, variously framed and matted, and hung in the two main gallery spaces and the back office area. The works were made between 1968 and 2011. The exhibit was curated by photographers Moyra Davey and Zoe Leonard. (Marginal installation shots at right.)

The following photographers have been included in this show, with the number of images and their details in parentheses: 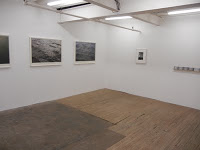 Comments/Context: I’ve often written about my particular distaste for lazy gallery group shows which gather loosely connected works under some meaningless theme. I continually struggle with whether I am more annoyed, insulted or just plain bored by such forgettable endeavors, and regular readers here will know that I tend to avoid reviewing the vast majority of gallery group shows of photography, since I can hardly ever find anything nice to say. An exception to this general rule is the brainy, thought-provoking group show Vision is Elastic. Thought is Elastic. now on view at Murray Guy. This show starts with an intriguing premise (the artistic relationship between words and images) and then probes that concept from different angles, with each carefully selected photographic work providing an individual voice on the subject.

The thematic construct here is dizzyingly layered: there are images of texts, images with writing in the margins, and texts overlaid and combined with images. There is the idea of the notebook, of notebook pages, where images act like a kind of shorthand, perhaps as a journal or diary (or artist’s book). There is the idea of the library (as a physical place, as a storehouse of ideas, and as representation of personality), of books (as objects and representations of ideas), and of footnotes and textual recombinations and allusions. There is the idea of the surface, of writing, both with ink and with light. It’s a fascinatingly heady brew of artistic process, image making, and wordy introspection. 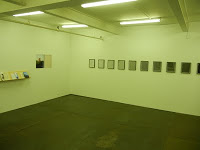 While I didn’t necessarily resonate with every image on display in its stand alone incarnation, when mixed and juxtaposed, the whole is remarkably larger and more rich than the sum of its parts. James Welling’s paired images of Connecticut landscapes and pages filled with the flowing script of a 19th century journal provide a sense of nostalgic place and time. Roni Horn’s annotated waterscapes have the feel of a busy brain, jumping from one idea to another and back again. Shannon Ebner’s cool spectrum of blank notebook pages brought me back to the quiet emptiness of creation. And Pradeep Dalal’s combinations of Indian architectural books and crumpled portraits left me probing other unseen connections. Together, the many ideas jostle and intermingle, creating a composite where every piece adds to the overall understanding of the theme.
This a group show where the curators have gotten beyond the “assortment of pictures” trap and focused the viewer on a central thesis; as such, the included works are less about themselves, but more about how they support the line of thinking being argued. What we’re really seeing then is the opinions and interpretations of the organizers, and in this case, that set of ideas is robust, sophisticated, and satisfyingly cerebral. 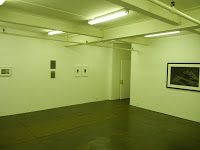 Collector’s POV: The works in this show are priced as follows, by photographer:

While the work of Horn, Welling and Wojnarowicz can all be found in the secondary markets from time to time, the majority of the photographers in this show have little or no auction history. As such, gallery retail is likely the best option for interested collectors at this point.

The photographs included in Sotheby’s recent Contemporary Art online sale delivered altogether solid results. Both top lots found buyers, and were then bested by a Vik Muniz reworking of Van ... Read on.