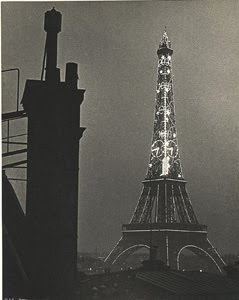 JTF (just the facts): A broad survey show, including photographs, films, books, magazines, and other ephemera, variously framed and matted, and hung against richly colored walls (dark blue, light purple, dark purple) in a series of five connected rooms and the entry on the lower level of the museum. In addition to the 104 photographs and 6 short films (displayed alternately on small monitors or large screens), there are 7 large glass cases located in the galleries that house groups of important or influential books, copies of magazines like Minotaur, Vu, Scandale, Allo Paris, Detective, and Voilà, postcards, and programs from the Folies Bergère. The exhibit was guest curated by Therese Lichtenstein. A catalog has been published in conjunction with the exhibition by the University of California Press (here). (Since photography is annoyingly not allowed in the ICP galleries, there are unfortunately no installation shots for this show. Ilse Bing, Eiffel Tower, 1934, at right, via the ICP website.)

The following photographers and filmmakers have been included in the exhibit, with the number of images/films on view in parentheses:

Comments/Context: Some of the most iconic and memorable pictures in the history of photography were made in Paris in the 1920s and 1930s, and this exhibit can best be described as a loving valentine to that vibrant place and time. The period between the wars was filled with transition and change, as traditional French culture was confronted by modernity and popular entertainment, with old and new mixing together in all facets of art and life. And while this is not a Surrealism show by strict definition, the curatorial choices clearly show that an acceptance of avant–garde experimentation was in the air, with the revolutionary ideas of André Breton and others influencing the output of the photographic community in both profound and subtle ways.

The images in this show are roughly grouped by subject matter. The exhibit begins with atmospheric architectural views: streets, gutters, stairs, fountains, and night views of the city’s bridges, and continues with a small room filled of various vantage points of the Eiffel Tower and the Arc de Triomphe. Popular culture comes to the forefront in later rooms filled with pictures of the circus (particularly horses), patterned shop windows, advertising posters, life on the quais, and lively after hours images of prostitutes, dancers, and bar culture; a wall of pictures of the old, vanishing Paris (primarily by Atget) provides a juxtaposition of old and new. The final room dives deeper into pure Surrealism, with abstracted nudes, dolls, mannequins, unusual portraits, and examples of outlandish collage, distortion, solarization, and colored toning.

While I don’t think this exhibit moves the scholarship on the period forward in any meaningful way, the fact remains that these are consistently great images. The show ties them together into a cohesive movement, where the commonality of vision, the interrelationships between the artists, and the overall context of the time period are all satisfyingly brought forth. As such, this tightly crafted show should be a crowd pleaser.

Collector’s POV: For many collectors, the material on display here will be entirely familiar, but that doesn’t reduce the impact of seeing so many high quality works from the same period hung together. The show does a good job of mixing well known masterworks with lesser known variants and rarities, so the narrative doesn’t become too nostalgic or predictable. As always, we particularly enjoyed the foggy Brassaï night scenes, the Bing and Kertész city views, and the Brassaï nudes; the magazine spreads and Surrealist videos added some unexpected background threads to the already familiar story.

Twilight Visions: Surrealism, Photography, and Paris
Through May 9th