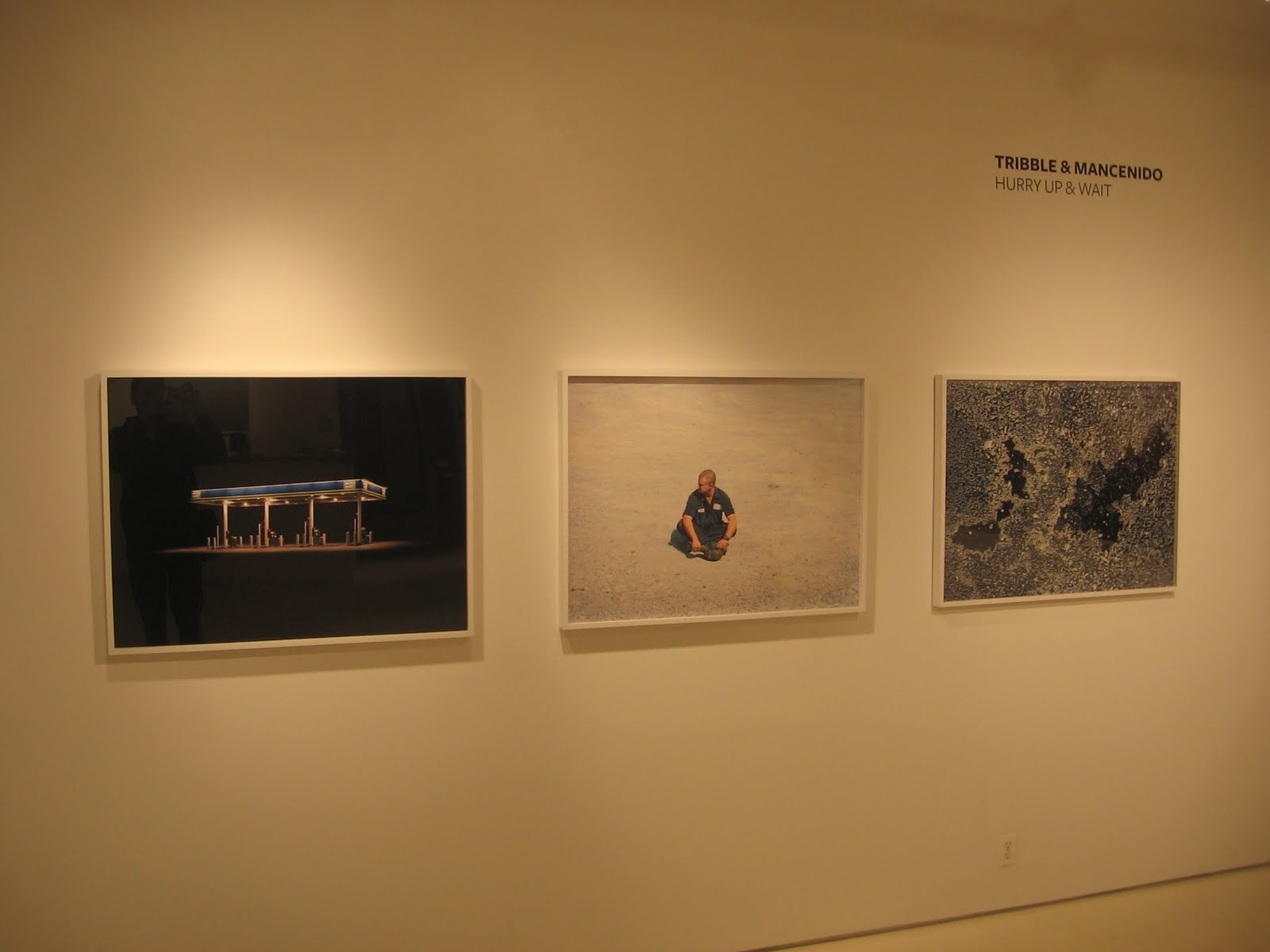 JTF (just the facts): A total of 11 color photographs, framed in white with no matting and hung in the main gallery space and behind the reception desk. All of the works are archival pigment prints, sized 30×40 and printed in editions of 5. The images were made between 2008 and 2010. (Installation shots at right.)

Comments/Context: Before seeing this show, if you had asked me to guess what I thought the lives of long-haul truck drivers were actually like, I suppose the adjectives I might have come up with would have been boring (mile after mile of endless highway), stressful (gotta get there on time!), dreary, lonely, and maybe even sad, all in an abstract way. To get at the real answer, the husband and wife team of James Tribble and Tracey Mancenido packed up their cameras, got their commercial licenses, and spent the better part of a year on a permanent road trip, documenting the American trucking subculture from the inside, almost like embedded journalists. What emerges from their travels isn’t a series of surprising localities, dramatic adventures or iconic moments, but a sense of constant, mind-numbing motion, a journey without destination, a life of interchangeable truck stops, gas stations, parking lots, and eighteen-wheel tractor trailers. Their photographic approach mixes staged portraits with still lifes, wider shots of truck stop architecture with close-up near abstractions. Quiet, overlooked details are used to animate the story: a glowing dash board, a rainbow oil slick on the pavement, a set of orange warning triangles, a swirling salt residue, a group of parked trailers at night, a repairman sitting on an expanse of gravel, a brightly lit gas station empty in the pitch blackness. The result is an atmospheric portrait that echoes some of the stereotypes I alluded to, but with a deeper sense of personality; the grim reality of rolling up the miles each and every day weighs heavily on these otherwise crisp photographic fragments.
With some deft editing and sequencing, I think this body of work would make a solid artist’s book. I think the danger lies in having too many pristine, almost bloodless images; it is the sympathetic connections and overlays to the larger story that give the pictures their emotional punch and context. Perhaps the success of the project actually turns on the relative strength of the portraits, even though some of the fragments may be the strongest images in the series. It’s clear that trucking is a hard and gritty life, and the weariness that is etched on the faces of the drivers delivers the memorable pathos. While the elegant, stylized details tell an important part of the tale, in the end, it is the forgotten struggles of the people that make it real. Collector’s POV: The prints in the show are priced at $3000 each. Since this is the first solo show in New York for the artist couple, it follows that their work has not yet reached the secondary markets in any way. As such, gallery retail is likely the only option for interested collectors at this point.
Rating: * (one star) GOOD (rating system described here)

Arnis Balcus, Myself, Friends, Lovers, and Others