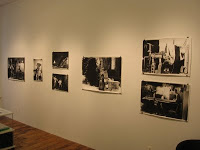 JTF (just the facts): A total of 21 black and white gelatin silver prints, binder clipped to the wall (not framed) in the single room gallery. The works range in size from 15×21 to 35×52, are printed in editions of 8, and were made between 2004 and 2009.(Installation shots at right.)

Comments/Context: Tim Roda’s photographs are like film stills from old home movies. The grainy black and white images are full of theatrical silliness, with scavenged but elaborate stage sets, unlikely costumes, and improvised narratives. Father and son play the roles of actors, alternating between irreverent humor, exciting drama, and the joyful craziness of make believe: bicycles, windmills, a towering dunce cap, and some extra long legs all find a way into their surreal stories.
The images themselves use wide contrasts of bright light and dark shadow to create a rough cinematic atmosphere, appropriately unfinished and raw. What I like best about the work is the genuine connection between the father and son: the creative working together, the whimsical games and joshing, the messy experimentation without any specific goal or endpoint; it’s often not exactly clear what is going on or whether it is finished, but it is clear that fun is being had by everyone involved. This bond gives the pictures a surprising tone of tender nostalgia, without crossing the line into the soupy or saccharine.
If part of the role of art is to give us insights into our own lives, this body of work is a good reminder that meaningful family entertainment need not include a screen (TV, video games, computers and the like) or something expensive, but that with enough imagination and effort, it can be made from almost anything at all. Collector’s POV: The prints in this show are reasonably priced, asking between $1300 and $2000, based on size. Roda’s work has no auction history, so gallery retail is the only option for accessing the work at this point.
When I first heard about this show, given that the work doesn’t really fit into any of our genres, I thought it was probably one I would miss. But another collector whose affinities are more in line with Roda’s approach sent me a quick note and encouraged me to check it out. I’m glad I did; the work was much stronger and more moving than I had expected.
Rating: * (one star) GOOD (rating system described here)
Transit Hub:
Tim Roda, Family Matters
Through October 31st
Daniel Cooney Fine Art
511 West 25th Street
New York, NY 10001
Twitter| Facebook|