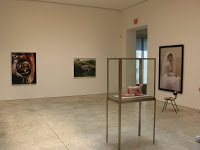 JTF (just the facts): A total of 41 works in a variety of media, variously framed and matted and hung in the 4 main rooms of the gallery, with additional images in the entry and the back hallway. 18 of these works are photographs; the rest are paintings, sculpture, collage and other media. The images range from 1866 to 2009, with most being made in the last two decades. (Installation shots at right.) 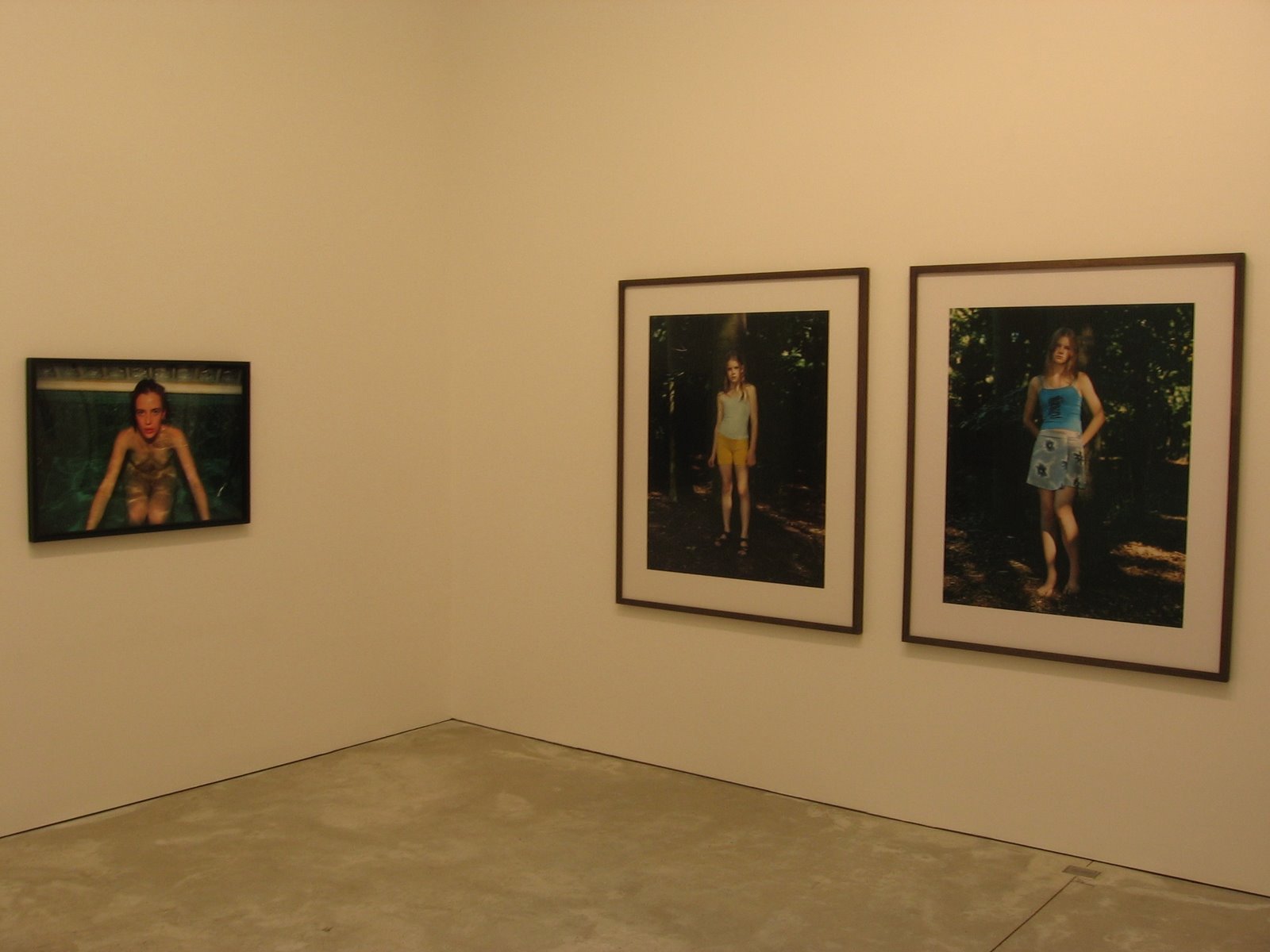 Comments/Context: Given the way our collection is built (subject matter driven themes), we have often thought about whether there are inherent differences between the way male and female photographers have approached certain subjects. Can we say definitively that Abbott and Bourke-White approached abstract skyscrapers differently than Steichen and Stieglitz? Or that Atkins and Cunningham looked at flowers differently than Fox Talbot, Blossfeldt and Mapplethorpe? For these two subjects, while there is of course plenty of variation, we cannot detect a strong and defensible causal relationship with gender. For the female nude however, this is not the case. Nudes by Weston or Brandt are altogether different in feeling than those of Bernhard or Cunningham, and in our view, these dissimilarities are largely a result of the sex/viewpoint of the artist.
Which brings us to the fine group show now on at Cheim & Read. While the press release for this show seems to go out of its way to defend the concept of the female gaze (as though it were somehow up for debate), to our eyes, there are identifiable and meaningful differences between the work of male and female artists working in both portraiture and the nude (and likely other subjects as well). This exhibit gathers together a wide variety of art works made by female artists depicting female subjects, and makes a strong case for real contrasts with the male perspective that dominates our culture.
The photography included here (and it is in the minority overall) is in the “one from each” mode, selecting a single work from a broad range of female photographers across the ages. What comes through in seeing this spectrum is that (not surprisingly) the ability of the photographer to gain the comfort/trust of the subject drives the making of powerful images. While trust building is not a uniquely female trait, I can easily agree that for these particular subjects (female portrait sitters that is), the presence of a female photographer undeniably made the image making more productive, and allowed the subjects to look outward with more confidence and authenticity. Shirin Neshat’s bored bride, Catherine Opie’s surfer, Hellen van Meene’s girl behind a thin curtain, and Sally Mann’s daughter on a divan just don’t happen in the same way if a man is behind the camera. The presence of a man’s gaze (however benevolent) would also have obviously impeded the images made by Katy Grannan, Francesca Woodman, and Nan Goldin. Marina Abramovic and Jenny Holzer take the gazing yet another step, refracting and reflecting the male gaze with withering critiques from the female perspective.
Another aspect that I found of interest in this exhibit is how photography as a medium seems to self select its subjects. What I mean by this is that nearly all of the photographs in this show are straightforward portraits or documents of performances; by and large, they are character studies or conceptual pieces, and even the nudes are only mildly suggestive. In contrast, much of the painting and sculpture included in the show is much more graphic in its sensuality, albeit somewhat abstracted via the media being used. Does this contrast tell us something about how the women who made these artworks are using levels of “realism” to tell their stories, and how they make choices of medium to match their intended subjects?
In general, this group show delivers on providing thoughtful juxtapositions of unexpected works, all within the larger context of what the female gaze might signify. What I like most about this show is not just that it offered a well selected group of pictures to see, but that it reminded us of a conceptual framework that we could repurpose and reuse in the context of our own collecting activities.

Collector’s POV: Cheim & Read has gone for the misdirection approach to pricing, with no transparent price list readily available at the reception desk. While I am normally not shy about asking prices, in this case, I didn’t have the energy to endure the required conversation to get the data; the gallery was crowded, the receptionists were frosty, and it just seemed like far too much work. While the Zoe Leonard nudes would fit best into our collection, I found the Shirin Neshat bride the most memorable.