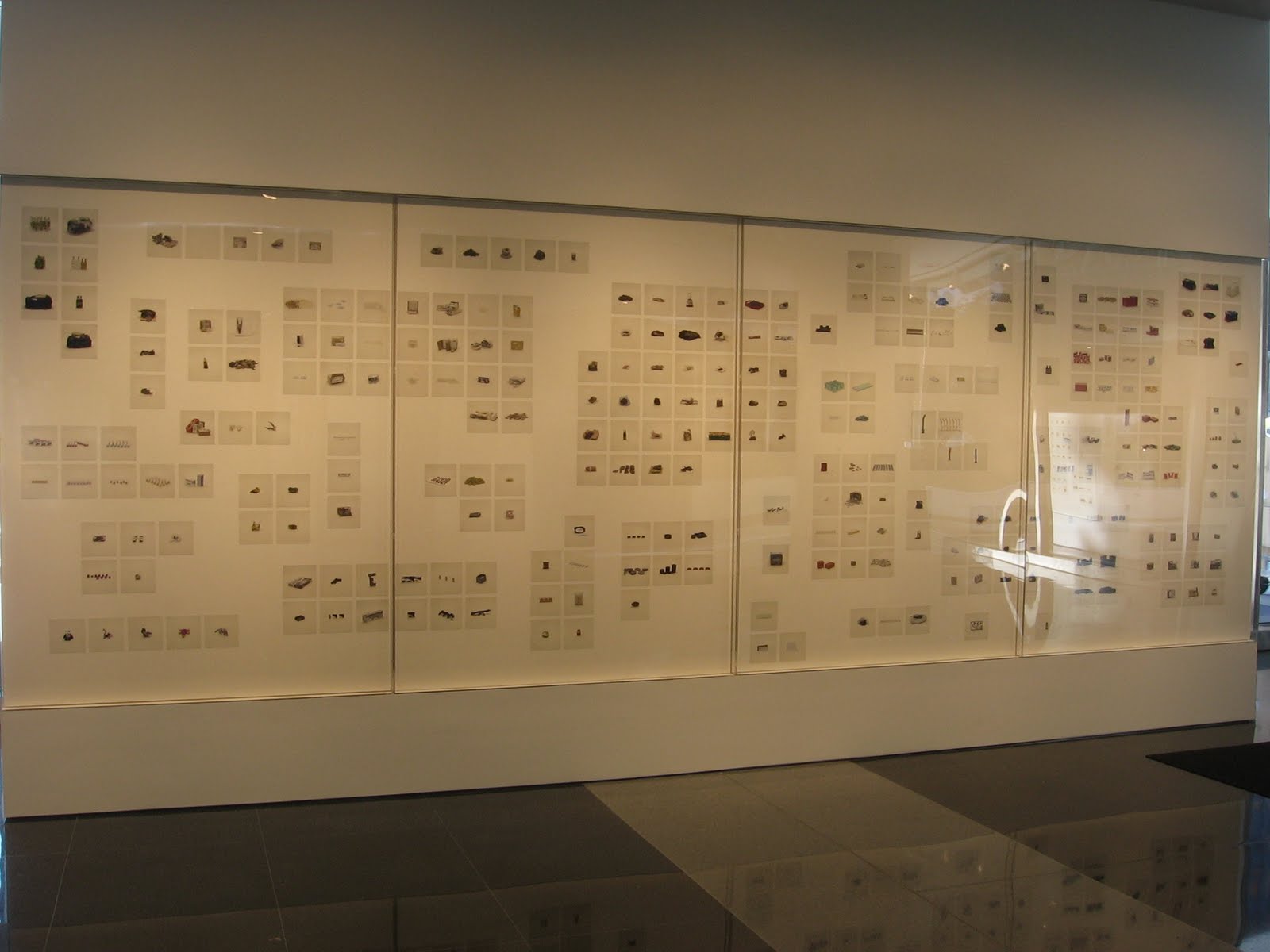 JTF (just the facts): A total of 1075 color photographs, mounted on archival paper, and hung in Plexiglas frames on three, two-sided walls in the single room lobby space. Each of the individual images is sized roughly 6×6. They are then grouped by subject matter onto 16 panels, each 95×71. All of the works were taken in 2009 and printed in 2010. A complete monograph of this project was recently published by Steidl (here). (Installation shots at right.)

Comments/Context: Taryn Simon’s approach to photography mixes a deadpan documentary style with an undercurrent of cerebral, conceptual ideas that tests the limits of what a photograph can see and communicate. In previous projects, she has photographed people wrongly convicted of crimes at the scenes of their undoing, and made images of objects that have a hidden or indecipherable purpose. In her newest work, she spent five days in the bowels of JFK airport, taking pictures of all the items that were confiscated from passengers and express mail packages. The result is a taxonomy of contraband, a snapshot catalogue of all of the things that fall outside the approved and acceptable. 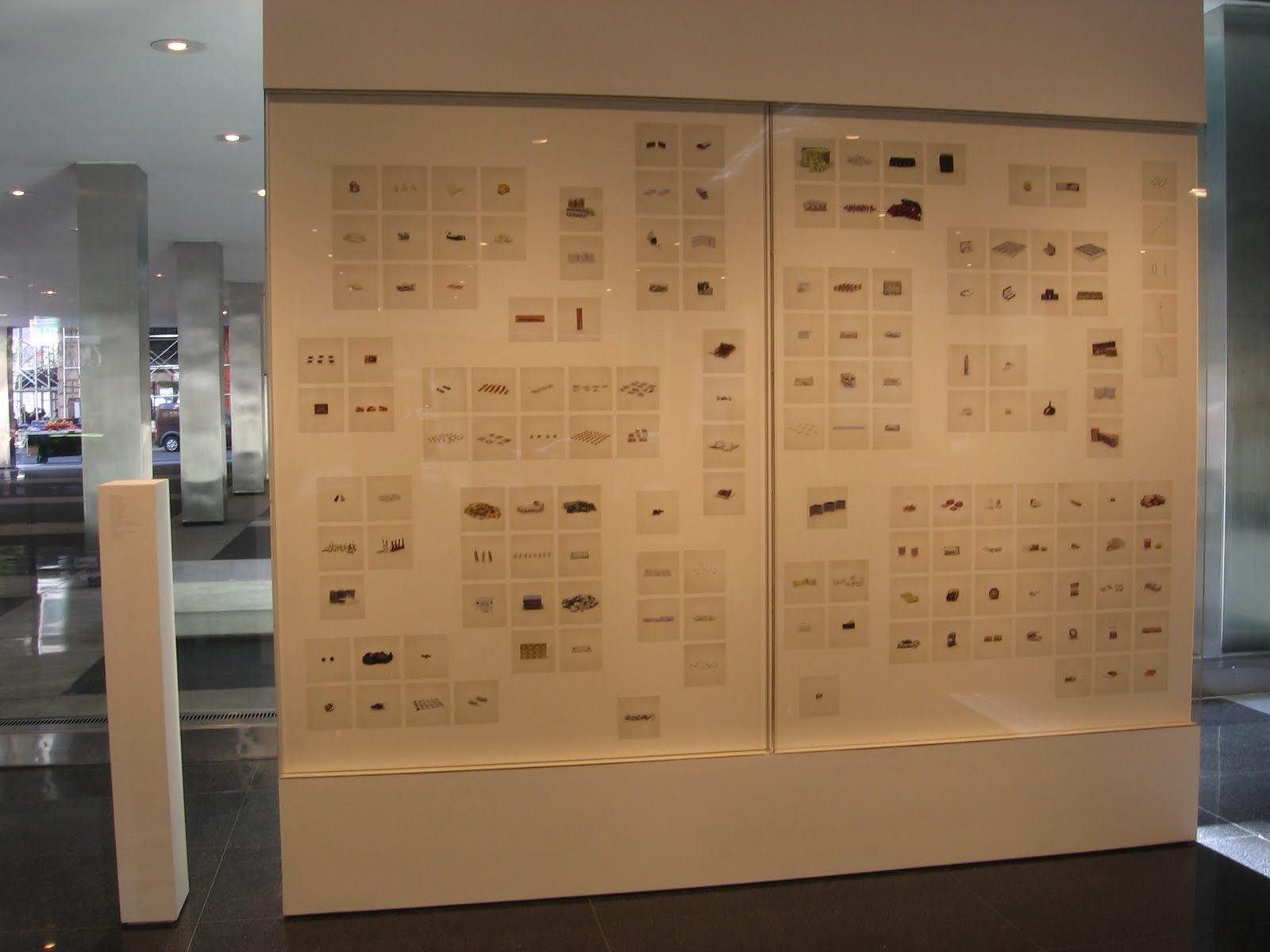 But taken together, seen as an extremely long and eclectic list of things that are prohibited, illegal, counterfeit, unlicensed, or undeclared, the objects start to take on a different resonance. They start to create a picture of the edges of our culture, telling stories of the forbidden and illicit, of people who pursue activities that fall outside the norms. They paint a picture of a melting pot of puzzling cultural influences and traditions. They tell us about the global commerce that flows in and out of America like a flood each and every day, meeting our demands, fueled by our desires. They highlight what we find threatening or scary. In short, they provide a surprisingly direct social commentary on what we have decided we are not (and yet we still are).

.
So what’s on this exhaustive list? Deer blood, Cuban cigars, pirated DVDs, counterfeit Beanie Babies, peyote, moon cakes, pharmaceuticals of various kinds, leaves from endangered species, nesting dolls, bongs, skeletons, berries, chicken feet, sugar cane, unidentified meats, fake watches, seeds, eggshells, pirated handbags, bags of fat, and cigarettes, among many, many others. It’s a parade of oddities and curiosities, a set of both the bizarre and the mundane.
This is a show where the backstory is everything, where the context provides the spark of ideas. It’s a thoughtful conceptual exercise, bounded by a particular slice of time, and it successfully focuses the viewer on a striking inversion. It forces us to look closely at how we have defined our world by seeing what falls outside its boundaries. 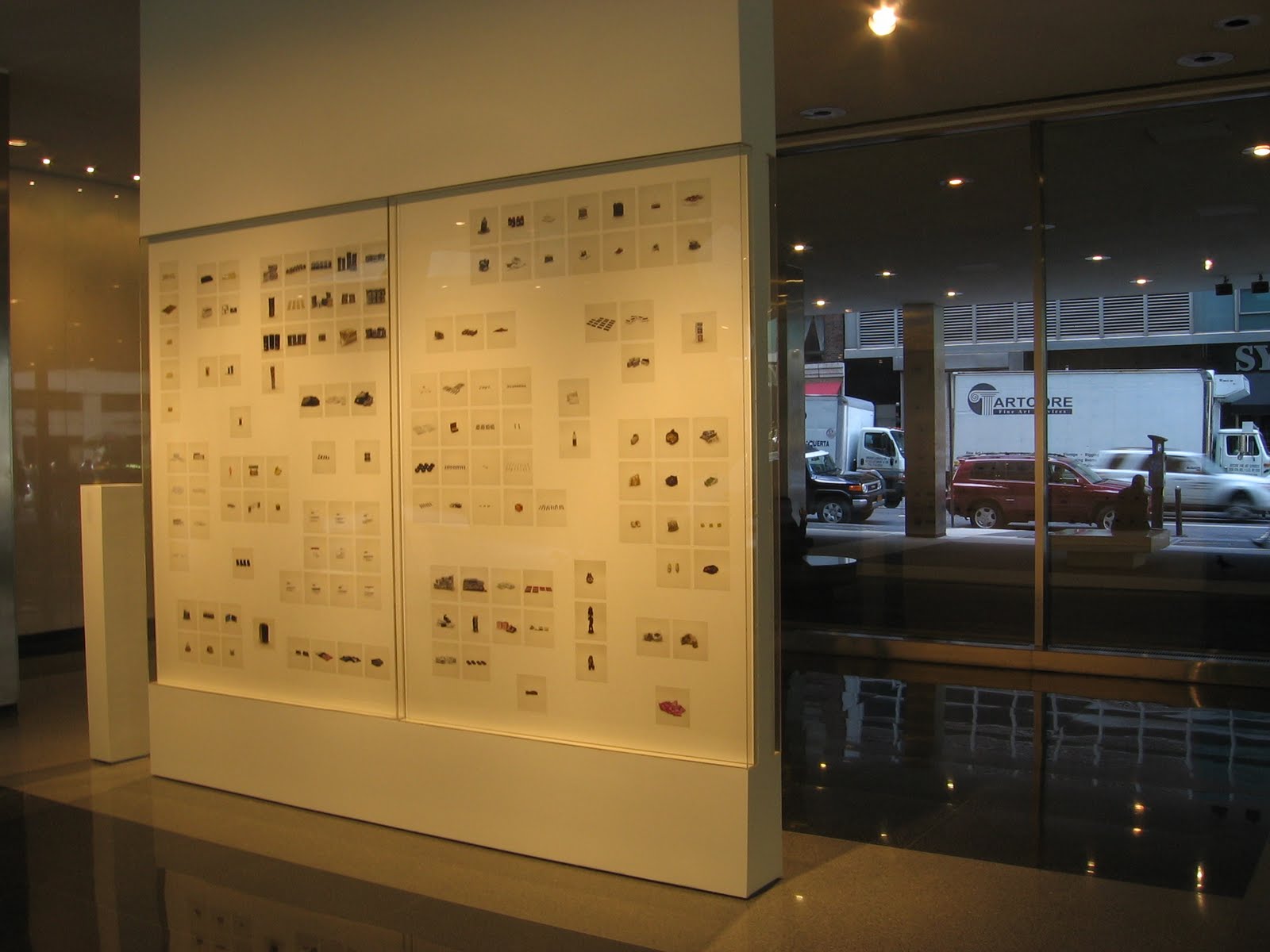 Collector’s POV: Taryn Simon is represented by Gagosian Gallery in New York (here) and Almine Rech Gallery in Paris and Brussels (here). Simon’s work has only just begun to enter the secondary markets in the last year or so, and no definitive price pattern has yet emerged. As such, gallery retail is likely the only real option for interested collectors at this point.
Rating: * (one star) GOOD (rating system described here)
Transit Hub:
Taryn Simon: Contraband
Through December 31st
Lever House Art Collection
390 Park Avenue
New York, NY 10022
Twitter| Facebook|