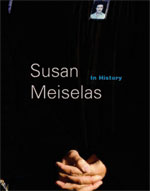 Documentary photography has always had at its core an unresolvable paradox: how can an observer straddle the desire to be “objective” with the real human need to be involved and take a position, especially in the face of unthinkable horrors and atrocities. Susan Meiselas has been struggling with this tension for her entire career, and for the most part, has given a little on theoretical objectivity to make the work that she thought was right. Taking sides introduces its own set of additional perils and complexities, as her detailed and visually arresting retrospective at the International Center of Photography clearly shows.

The exhibit is divided into three wholly separate sections, delving deeply into her three most recognized projects: Carnival Strippers, Nicaragua, and Kurdistan. The Carnival Strippers (mid 1970s) section is found tucked into the back of the downstairs gallery, the quiet, intimate black and white images arrayed along a curving grey wall that forces you to bend around and double back to see all the pictures. The 39 images chronicle the lives of women in these dreary environments, alternately confident and aggressive (although often bored) when in front of the crowd, and sad and vulnerable (although often surprisingly strong) when off stage. Meiselas has clearly engaged her subjects and been welcomed inside their lives. What makes this exhibit particularly creepy is the voice overs being played in the background: comments and wisecracks from the male patrons and managers that Meiselas recorded at the time. If the pictures weren’t enough to focus your attention on the complex attitudes and voyeurism inherent in the subject, the audio interviews reduce the normal distance between artwork and viewer and drive the point home.

In contrast to the careful quality of the Carnival Strippers project, the Nicaragua work (late 1970s and beyond) is all about violent action and color. These are images of a revolution in progress, with people fighting, guns and soldiers, and non-stop motion. This section has large unframed prints, hung nearly edge to edge, out in the space of the gallery as well as on the walls. The result is a visual overload that diminishes the intensity of any one of the images and envelops the viewer in the messiness of the action. In addition to the still photos, there are 3 small and 1 large video screens playing looped videos Mesielas made at different points in the project, and 4 huge images printed on canvas, hung in the stairwell.

The single most interesting aspect of this portion of the show is the Meditations installation from 1982, off to the side in a separate room. This piece highlights how Meiselas‘ images were used in and out of context, in magazines and newspapers, in books, as artworks, and as appropriated imagery used for entirely other purposes. The famous “Molotov Man” image is seen in probably a dozen different incarnations. This works shows clearly how a documentary photographer loses control of his or her work as it is published, and the images take on lives of their own that may or may not follow the original intentions of the artist. For me, this piece was a very striking exposition of how our visual society is morphing around us.

If the Nicaragua project was about being at the center of the action as it was happening, the Kurdistan project (early 1990s to present) is about the aftermath of action, about what happens in the days, months, and years after a conflict has finished its chaotic stage and life returns to quieter rhythms when normal people try to pick up the pieces of their broken lives. There are 33 silent and somber color images of rubble and destruction, abandoned clothing, graves, and grieving families holding images of dead loved ones arrayed across two rooms. In many ways, these pictures are the opposite of action; they are frozen in time. These are paired with 9 glass cases full of found photographs, letters, and other materials, pieces of the puzzle of Kurdish history that are being gathered and organized for the first time. There are also 4 huge projection screens telling various personal stories, and an array of computers at the back available for further study and in depth examination. Again, Meiselas has gotten into the middle of her subject, and given us her viewpoint about what has occurred and what needs to happen going forward. There is a profound sense of the need to recapture history in these images, as a basis for starting over.

In general, I came away impressed with how Meiselas has carefully tuned her approach to the needs of the widely differing subject matter she has attacked. Each section is thoughtful, well crafted, thorough and opinionated, but each project is wholly different from the others.

As for the exhibit itself, it has an initial “wow” factor, due I think primarily to the array of curatorial devices being used: every tool is employed – large prints, small prints, audio, video, computers, projections, cases, you name it, it’s here. And while this is entertaining, I’m afraid that in the end, it’s just too much; some of the flourishes are overwhelming and detract from allowing the visitor to engage with the images. I also think the exhibit feels a bit cramped; the work would have benefited from some more breathing room (especially the Nicaragua section). The entire ICP gallery area should have been used for this retrospective (instead of just the basement).

But these are the small quirks of an otherwise first rate exhibition. Susan Meiselas is an important documentary photographer and this show cements her position in the history of the medium. This show is one of the best of the year, and make sure to allow enough time to deliberate over its contents when you visit. There is also a large monograph available (cover above) to enable further study and review.

The artist’s web page can be found here.