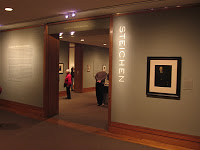 JTF (just the facts): A total of 115 photographs, all drawn from the permanent collection, variously framed and matted, and hung in a series of three connected rooms on the second floor of the museum. A handful of images are exhibited on the exterior walls, showing work from each photographer plus additional detail on several photographic processes. In the main exhibit area, each photographer is given his own room. In the Stieglitz room on the left, there are a total of 42 individual photographs by Stieglitz (either framed or in cases), plus two cases of Camera Work and other books/plates and 4 portraits of Stieglitz – 1 by Steichen and 3 by Strand. The Steichen room in the center contains 36 photographs by Steichen, either framed and hung on the grey walls or laid out on tables. The Strand room on the right contains 24 works by Strand, with 1 portrait of Strand by Stieglitz and a case containing 3 Camera Work gravures. Overall, the works in the exhibit span the period from the early 1890s to the mid 1930s, and cover a wide range of processes, including gelatin silver, platinum, platinum-palladium, palladium, direct carbon, gum bichromate and autochrome. A catalog of the exhibition has been published by Yale (here) and is available for $35. A supporting group exhibit of 1910s photography entitled Our Future is in the Air continues in adjacent rooms. (Blurry, crowded installation shots of the main show at right.) Comments/Context: The Stieglitz, Steichen, Strand show at the Met is exactly what its title suggests: three silos of star-power vintage work by contemporaneous master photographers, the connecting backstory provided by snippets of explanatory wall text. Given the Met’s truly world class holdings in the work of these three influential artists, the show is a budget-friendly way for the museum to bring some of its treasures out of storage.
The Stieglitz room is basically a mini-retrospective, with representative images from most of his major themes and subjects: late 1800s Pictorialist New York, Modernist nudes of Georgia O’Keeffe, cloud study Equivalents, views near Lake George, and later 1930s New York cityscapes. It’s a solid, greatest hits summary of Stieglitz’ career, with everything from Spring Showers and The Steerage to Spiritual America. While this room is densely packed with famous imagery, Stieglitz’ nudes of O’Keeffe never fail to outshine everything else for me. There is a full wall of elegant fragmented body parts on display, pared down and thrillingly alive; few have done it better in the century since. The Steichen room focuses on his turn of the century Pictorialist work, leaving out virtually all of his later career. Clustered at one end of the room are some of the gems of this era: moonlit landscapes, ethereal nudes, and haunting images of Rodin’s Balzac. But shockingly, even these masterpieces fade into the background when hung near the set of three large exhibition prints of the Flatiron Building. Seen alternately in soft green, rich blue, and dark brown, the building’s personality changes, looming out of the twilight. Together, they are a staggering example of tour-de-force printing.

The Strand room centers on the first two decades of the photographer’s career, and it is Strand’s images from before 1920 that are the most relevant to the discussion of the interactions with Stieglitz and Steichen. His sparse, geometric abstractions from 1915-1917 really broke with the past and ushered in Modernism. The black rectangles of Wall Street, the arcs of bowls, the patterned shadows on a table, even laundry strung across city backyards are all transformed into pure lines and shapes, breaking with the fussiness of Pictorialism and leading the move to straight photography.
. With such an embarrassment of riches on display, it seems downright ridiculous to find fault with this show, and yet, I think it suffers from trying to do too many things, and ultimately fails to tell us anything particularly new about these three photographers. If the goal was to parse the intricate connections between these three (both artistically and as people), then a chronological ordering and timeline would have been much more effective in teasing out the influences; the current structure creates three distinct buckets, and the connections and overlaps between them aren’t made particularly clear (the supporting exhibit of 1910s photography doesn’t add much to the narrative either). And while the Stieglitz room has a retrospective feel, the other two are edited in ways that add more random and tangential elements into the conversation (Steichen’s autochromes, Strand’s Mexican portfolio). There is also an overlay of process instruction, begun on an exterior wall, but left unfinished and uncorrelated in the three gallery spaces.

In the end though, these quibbles are drowned out by the power of some of the iconic prints on view. While the scholarship ball may not have been moved forward much with this show, what I’ll remember about this exhibit five or ten years from now is getting the rare opportunity to stand up close to those three Steichen Flatirons, and to see for myself just how spectacular they truly are.

Collector’s POV: I’m going to forgo the usual discussion of prices for this show, not only because this is a museum exhibition, but because trying to accurately pin down prices for the rarities on display here is simply a fool’s exercise. While the work of all three photographers is generally available in the secondary markets, if we focus on the “best of the best” prints (especially the large exhibition prints), there are few if any market equivalents. Undeniably, if some of these masterworks were to inexplicably come into the market now, they would easily fetch well into the millions. This isn’t true for everything on display, but this exhibit has a stronger concentration of exceptionally valuable/expensive vintage photography than any other show in New York this year.
.
Rating: ** (two stars) VERY GOOD (rating system described here)
Transit Hub:
Stieglitz, Steichen, Strand
Through April 10th
Metropolitan Museum of Art
1000 Fifth Avenue
New York, NY 10028
Twitter| Facebook|