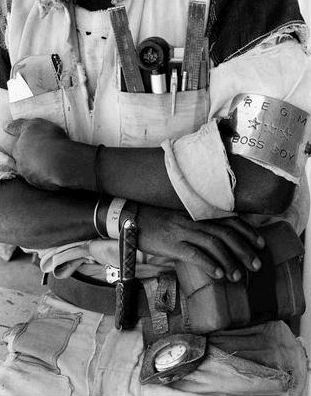 JTF (just the facts): A total of 150 black and white photographs, framed in blond wood and matted, and chronologically/thematically displayed through a winding series of adjoining gallery spaces. The prints cover the period from roughly 1948 to the present. The Jewish Museum does not allow photography in the galleries, so unfortunately, there are no installation shots for this exhibit; the images that accompany this post were taken from the museum website.

The exhibit is divided into seven thematic groups, along with a separate room devoted to a film about Goldblatt, a South African historical timeline, and 7 photography books that were influential for Goldblatt. These sections are listed below, with the number of photographs and other ephemera in parentheses: 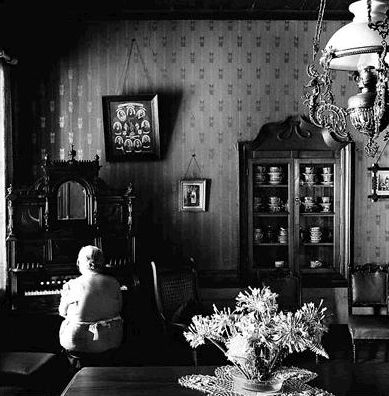 Comments/Context: In the past couple of years, New Yorkers have had an amazing opportunity to learn about the superlative work of South African photographer David Goldblatt. There was a large exhibition at the New Museum last summer (here) that paired some of his older work with more recent large color images, a tightly edited gallery show of vintage 1970s work at Howard Greenberg earlier this year (here), and now this retrospective-style exhibition covering a handful of his most successful projects and books. Given how little overlap there is between these three shows, we’ve really been exposed to the sweep of Goldblatt’s varied artistic output, over a career that spans more than 50 years.

The show is organized into discrete groups of photographs categorized by subject matter, often echoing or sampling from photo essays or books that Goldblatt produced. A selection of works from his 1973 book On the Mines (in collaboration with author Nadine Gordimer) chronicles life in the South African gold mining regions, juxtaposing men in hard hats at the bottom of mine shafts with concession store clerks, abandoned mill foundations, and shadowy bunks in dormitories. His pictures capture the not-so-subtle racial divisions (black workers, white owners) that were commonplace in these regions, embedded in the fabric of the business. (Boss Boy at the Battery Reef, Randfontein Estates Gold Mine, Randfontein, 1966, at right, top.)

Goldblatt’s images of Afrikaners are filled with contrast and subtle contradiction. Some are filled with quiet sympathy, chronicling the hardships of farm life, the fierce commitment to the church, and the general ordinariness of the people, with a dignity reminiscent of Walker Evans. And yet underneath, the undercurrents of racism, nationalism, and extremism give the pictures a heightened sense of anticipation and anxiety, of emotions simmering beneath the surface. Farmers with craggy faces make pine coffins, wear their Sunday best, and sit blankly at kitchen tables. I particularly liked the image of an older woman playing a fancy organ in a dark dining room, with the riot of flowers on the table; it seems so perfectly emblematic of the traditions of the Afrikaner life. (On an ostrich farm nead Oudtshoorn, 1967, at right, middle.) 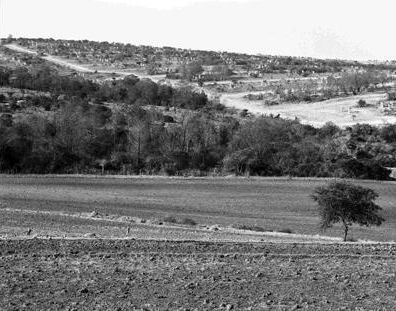 The Bantustans section of the show collects images of everyday life in the black puppet states, where houses of sticks, mud, rock and wood provide traditional shelter for families. (Landscape with 1500 lavatories, Frankfort, Ciskei, 12 July 1983, at right, bottom.) The most powerful pictures in this group are those of commuting workers waiting for the bus, clustered in crowds at stops in the middle of the night, strafed by the glare of headlights. Images from the white suburban community of Boksburg are a direct contrast, with well dressed, middle class ladies meeting at home for bible study, walking by shop fronts, ballroom dancing or attending military ceremonies, living in a kind of fantasy world where the apartheid system lies out of sight.

The pictures of Structures provide yet another set of back and forth contrasts: heroic Afrikaner monuments and churches followed by destroyed houses and shacks under construction, perfect gardens next to nomadic sheep shearers. In one image, a black family lives in a house with no walls, where the bed and table are jumbled together, surrounded by rubble. The final section of images from Johannesburg finds these same themes embedded in the everyday life of the city. A menacing dog guards a parade at a soccer match (with the classic Life is Great slogan on the side of a car), children play on the top of a junked car frame, a white baby lies on a blanket tended by three black nannies, and a shoemaker plies his trade behind a jungle of razorwire.

All of these projects and photo essays have a commonality of feel, a sense of understated delivery, where similarities and differences are given equal weight, where subtleties of injustice and ironies of experience are highlighted without the hectoring of a heavy hand. Goldblatt’s compositions are crisp and often sparse, picking out a single facet from the sea of contradictions around him. Perhaps the best way to describe the works is that they are implicit rather than explicit; they force the viewer to discover the back story, rather than shouting the obvious.

All in, this show applies a more traditional retrospective framework to Goldblatt’s long career, and as such, provides a more coherent sense of chronological background and progression than the other shows of his work we’ve seen in New York recently. Even if you caught those other two exhibits, this one is worth a visit to provide a more thoroughly constructed historical foundation for his ideas and to fill in some photographic gaps with excellent projects you may have overlooked.