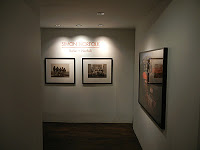 JTF (just the facts): A total of 14 color photographs, hung in the tight entry hallway and the main gallery space. 7 of the works are archival pigment ink prints, framed in black and matted, each 20×24, in editions of 7+2AP. The other 7 works are also archival pigment ink prints, but framed in black and unmatted, each 40×53, also in editions of 7+2AP. All of the images were taken in Afghanistan in 2010. A monograph of this body of work entitled Burke + Norfolk, Photographs from the War in Afghanistan by John Burke and Simon Norfolk was published by Dewi Lewis in 2011 (here); it is available from the gallery for $80. (Installation shots at right.)

Comments/Context: Simon Norfolk’s recent photographs of contemporary Afghanistan remind us that while the daily news might give us momentary examples of both apparent progress and discouraging set backs, there is a repetitive timelessness to the struggle that stretches back centuries. Using John Burke’s 19th century photographs of the Second Anglo-Afghan War (1878-1880) as a source of inspiration and dialogue, Norfolk has responded with two sets of images that document the situation on the ground in complementary ways.
. The first group of pictures reference the traditions and expectations of 19th century group portraiture, with rows of assembled peoples arranged and photographed with rigid stone-faced formality. While the subjects are locked in an ageless sepia-toned patina, there is evidence of change and modernization hiding within the dated visual vocabulary: a head-scarfed women’s basketball team, young girls at an indoor skate park, the staff from a new Afghan airline, a group of high tech mine sweepers, and American marines paired with Afghan police trainees. Mixed in with shots of traditional musicians and Taliban sympathizers in dark robes, Norfolk highlights the contrasts of new and old, grounding his observed changes in the slow evolution of the society as a whole. The second group of works are large scale color cityscapes, often taken in the light of the early morning or the twilit evening when the sky is misty and purple. These images explore the two sides of simultaneous modernization and war-torn destruction: a homeless family standing in the hazy, crumbled ruins of the old Presidential Palace, an optimistic pizza restaurant flanked by a massive pile of rusting bus carcasses, red bags of fresh apples piled amidst the frenetic motion of the traffic, and clumps of bamboo construction poles and ladders echoed by the surveillance towers on the dusty hills in the background. Norfolk’s photographs capture the essence of the everyday struggle of the locals, where the details of the Western occupation coexist with the remnants of the endlessly beaten down city.

While there are no actual prints by Burke in this show for handy side by side comparison, the mix of ideas between the two seems to have been an effective way for Norfolk to catalyze new visual approaches to the subject matter. Both sets of new images feel very rooted in and mindful of the past, where if we look carefully, the events of today are an updated repetition of those from long ago.
.
Collector’s POV: The prints in this show are priced as follows: the 20×24 prints are £2500 and the 40×53 prints are £6000 (note the prices are in British pounds). Norfolk’s work has begun to slowly enter the secondary markets in recent years, with prices at auction ranging between roughly $6000 and $26000.