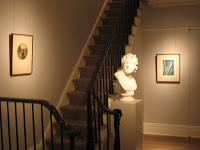 JTF (just the facts): A total of 25 works, variously framed and matted, and hung in the entry, main gallery space and back viewing alcove. Several of the works are displayed in cases or available for viewing by request. A wide variety of 19th century processes are on display: daguerreotype, salt, albumen, cyanotype, silver bromide, carbon, photogravure, gum bichromate, and gum-platinum, as well as photogenic drawing negative, direct positive, and waxed paper negatives. The images range from 1835 to 1914. An in-depth scholarly catalogue of the show is available from the gallery for $40. (Marginal installation shots at right.) Comments/Context: Even in a city as large as New York, it takes some effort to see quality 19th century photography on a regular basis. Hans Kraus‘ gallery on Park Avenue is perhaps the best place to see such work outside the major museums, and his 25th anniversary show on view now provides a selection of exceptional work going back to the medium’s very beginnings. The hushed tones and elegant atmosphere of the gallery create an imposing feeling of being somewhere special, where spectacular treasures just might be revealed.
.
I’m certain that a connoisseur of 19th century work would find each and every image in this show a staggering amazement. But since our collection only brushes the edge of the 19th century, I found the exhibit to be headlined by a handful of stunning images, with many others also on display that I really was not educated enough to truly appreciate. The two large exhibition prints in the main gallery, one a lovely green-toned Pictorialist Steichen nude, the other a Steiglitz winter scene of New York, are superlative pieces; even I could see that both of these are truly breathtaking, irreplaceable museum quality works.
The Anna Atkins floral cyanotype in the hallway (Irises) is one of the best Atkins images I have ever seen in person; since we are flower collectors, we took some time to look at many of the other Atkins florals and algaes Kraus has in his inventory (not in the exhibit, but some of which we had bid on and lost at auction over the years), but the Irises were far and away superior in composition, with both bold lines (from the opaque leaves) and delicate veining (from the flowers). We also took some time to examine the early Talbot image Tripod in the Cloisters of Lacock Abbey, which we carefully viewed in dimmed light; the negative has a mysterious quality, as if the viewer could tag along as Talbot saw the first indistinct forms rise up out of the paper in 1835.
Other highlights include a mesmerizing portrait by Julia Margaret Cameron, Alvin Landon Coburn’s orange tinted print of an early flying machine, and Charles Negré’s still life image of a chandelier, complete with dancing white candle flames painted in by the artist by hand.
Overall, this is a show that will appeal most to experts, who will undoubtedly marvel at the universally fine specimens Kraus has gathered together to celebrate 25 years in the business. For those of us mortals who lack the deep knowledge of the intricacies and stories of all of these works, there are at least a few jaw-dropping blockbusters to catch your eye. I also think this show is worth a visit for contemporary collectors who tend to sweep by 19th century work without so much as a glance; this is a well edited sampler of images that can help to explain why 19th century photography is still both exciting and relevant. Collector’s POV: The prints in the show range in price from $12000 to $175000, with very few near the bottom of that range and 7 other works labeled POR; given the quality and rarity of these items, it should be no surprise that the prices are off the charts. With photography’s overall rise in prominence, it seems more and more museums are coming to realize that they need to have representative works from the 19th century to tell a fuller story of the medium’s history, and yet, the pool of available works of top quality is shrinking. Thus, museums and a core group of dedicated collectors are snapping up these kinds of images quickly, with scarcity driving prices higher and higher.
As I noted above, the Atkins in this show would be the best fit for our own collection, but at $75000, it is priced above the normal range for her work; again, you’re paying for the best, from a well respected retail location, so be prepared to bite the bullet and pay a big price if you want the real gems that are offered here.
Rating: * (one star) GOOD (rating system described here)
Transit Hub:
Silver Anniversary: 25 Photographs, 1835-1914
Through December 18th
Hans P. Kraus, Jr. Fine Photographs
962 Park Avenue
New York, NY 10028
Twitter| Facebook|