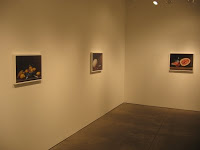 JTF (just the facts): 10 chromogenic prints of various sizes, all from 2007/2008, displayed throughout the main gallery (installation shot at right). In editions of 7, some of which are sold out.

Comments/Context: In looking back at my college Art History classes, there was virtually no mention of photography and its relationship to painting. While we might have looked at a few iconic photographs, the influence photography had on painting and vice versa was never discussed or even acknowledged. And yet we know that with the invention of both the Daguerreotype and the Calotype, painting was affected almost overnight, both by the use of photography as a seeing tool, and by the reaction against the sharp detail that was inherent in photography. Since then, the two mediums have played off each other time and again. Pictorialism, where photographs were made to look like paintings, and Photo-Realism, where paintings were made to look like photographs, are two obvious examples, but more subtle influences in color, composition, framing, and usage of light can be found between the two arts over time with very little effort.
Sharon Core has taken this conversation between the two mediums in a new and unexpected direction. Her photographs are still lifes, made in the style of the artist Raphaelle Peale, an American painter of the early 19th century. Still life painting of this type, of course, goes all the way back to the mid 1500s, where Dutch artists made exquisitely detailed and “realistic” paintings of carefully composed tabletop scenes. Peale’s paintings represent an American spin on these earlier works, complete with fruits, vegetables, flowers, and utensils common to that particular time and place in American history. Core has steeped herself in the work of Peale (ironically via photographic reproductions in books and catalogs) and made her photographs “in the style” of his work. 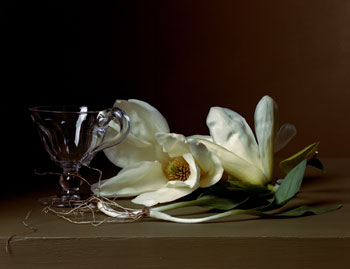 Core began this mind bending kind of art a few years ago, with a series of photographs re-enacting the cakes and desserts of Wayne Thiebaud. Taking the original paining as a guide, she would meticulously bake the cakes and set the stage to imitate the sugary world of Thiebaud. These new still life works follow along on this conceptual track. At one level, they can be read as beautifully composed still life photographs; on another level, they can be seen as a multi-layered riff on the interrelationships between the mediums of photography and painting. In particular, because of the “real life” nature of the original paintings, the “truth in photography” discussion is raised again in an original way by these works.
Collector’s POV: These prints are priced between $4000 and $7750, depending on size and availability. Magnolia with Wild Leeks, 2008 (shown above at right) was our particular favorite, but all the works are accomplished. The prints benefit from a careful, up close inspection; it is only by really looking carefully that you can see how Core uses photography to imitate painting, down to the painstaking highlights and details. Overall, this is an impressive body of work.
Rating: * (1 star) GOOD (rating system described here)
Sharon Core, Early American
Through December 6th
Yancey Richardson Gallery
535 West 22nd Street
New York, NY 10011
Twitter| Facebook|