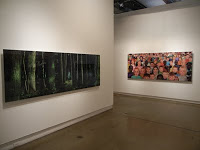 JTF (just the facts): A total of 11 large scale color works, hung unframed in the entry, the two main gallery spaces, and the upper viewing area in the back of the gallery. All of the works are chromogenic prints mounted to Dibond and Plexiglas. Physical dimensions range from 33×24 to 49×130 (yes, wider than 10 feet); the larger images are printed in editions of 7+2AP, and the smaller images are printed in editions of 10+2AP. All of the works on view were made in 2010. A catalog of the exhibition is available from the gallery. (Installation shots at right.)
.
Comments/Context: This show gathers together a variety of fresh work from the Dutch photographer Ruud van Empel, and finds him both continuing down old paths and evolving new but related ones to explore. Process-wise, we are still in the realm of elaborate composite images, where thousands of visual fragments have been Photoshopped together into van Empel’s signature otherworldly hyper-reality, full of unnerving children portrayed in a combination of perfect detail and odd flatness. 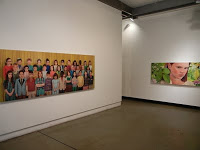 Three of the images on view extend his popular World series, where black kids sit submerged in verdant, idealized pools (complete with lily pads and tropical flowers), or stand in plaid sport coats and party dresses amidst the clean, leafy eden. His Generation series of children in the rigid rows of a traditional school picture also has a new member; this time the risers are populated with a majority of Jewish kids. Other new works seem to riff on existing ideas, but expand them in new directions. The Theatre series takes the night time palette of the Moon series and applies it to dark, wooded scenes (almost like the forbidden forest of fairy tales), thick with tree trunks edge to edge. Connection seems to jump off from the Dawn series, but in an up-close panorama format, while Wonder seems descended from the Generation pictures, but is exploded outward to cram faces together in a crowded all-over pattern of childhood diversity. Brothers & Sisters takes some of the formality of the paired portraits of World, and adds the simple idea of family resemblance.

As a result, this show has the feeling of something altogether familiar, of van Empel subtly tuning and editing, but not changing the overall formula much; if you liked his prior work, you’ll probably like these images as well, and if you didn’t, you’ll probably feel like these are more of the same. These recent pictures are not radical, frame-breaking experiments, but more a consolidation of the artist’s complex visual toolkit, or perhaps better, a lively sprinkling of nuanced iterations. 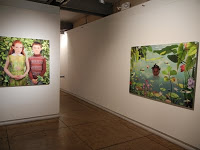 Collector’s POV: The works in this show are priced between $25000 and $98000, depending on size and on the location in the edition. In the past year or so, Van Empel’s prints have found secondary market buyers between roughly $16000 and $35000.

My favorite image in the show was Brothers and Sisters 3, 2010; it’s the picture on the left in the bottom installation shot. I like the idea of moving away from the consciously exotic; here van Empel has traded the lush, succulent jungle of the World series for the Northern forest in spring, placing two pale skinned, red haired children in 3/4 pose among the leaves. Even with the dated turtleneck sweater, it has an almost Victorian quality to it that I found intriguing.