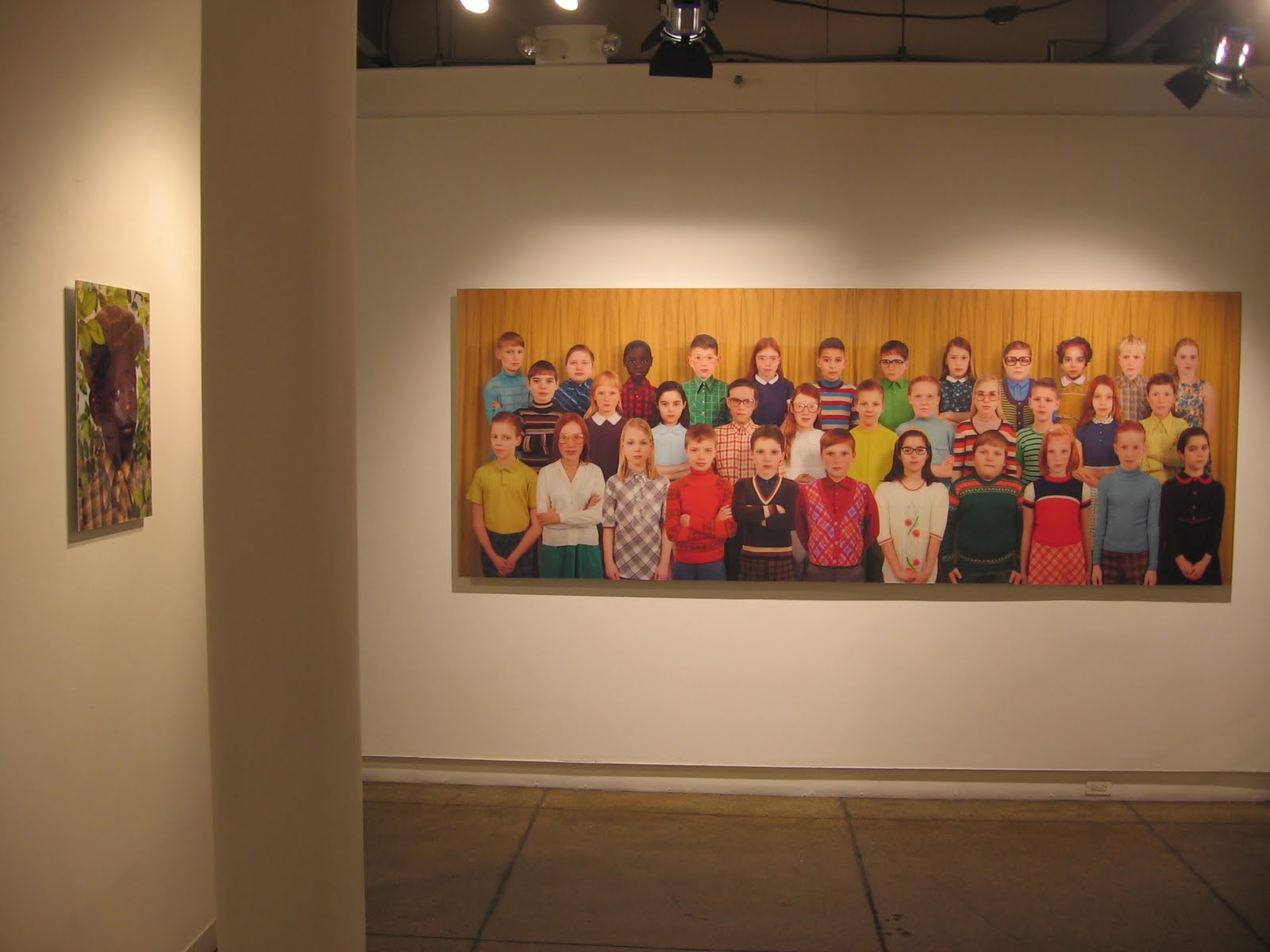 JTF (just the facts): A total of 4 color works, hung unframed in the upper viewing area in the back of the gallery. All of the works are chromogenic prints mounted to Dibond and Plexiglas. The two large works, each 49×130, are printed in editions of 7+2AP, and were made in 2010; the two smaller works, each 24×17, are printed in editions of 10+2AP, and were made in 2009.(Installation shots at right.)
.
Comments/Context: In Ruud van Empel’s newest works, the Dutch photographer has moved away from the lush leafiness of his previous jungle settings and has opted for the buttoned-up formality of the traditional class portrait, with rows of school children in their picture day best outfits, standing on risers against a yellow curtain. Squint your eyes to blur the details and his ten foot wide panoramas look like any school picture taken in the past 50 years.
.
But when your eyes come back into focus, it becomes clear that van Empel’s children are unlike any you have seen before. Using Photoshop to composite together hundreds of images, he has created a signature style that has become the hallmark of his work: glossy perfected children with big eyes, staring out from the plane of the picture with an almost surreal oddness – what seems at first glance to be idealized comes out more than a bit unsettling. In past works, he has highlighted a single child, or perhaps a pair of kids, sometimes in matching fancy dresses or sport coats, sometimes with bare skin. These new works amplify and expand his cast of characters, allowing him to play with clothing, hairstyles, and facial features to create a kaleidoscope of different personalities.
. 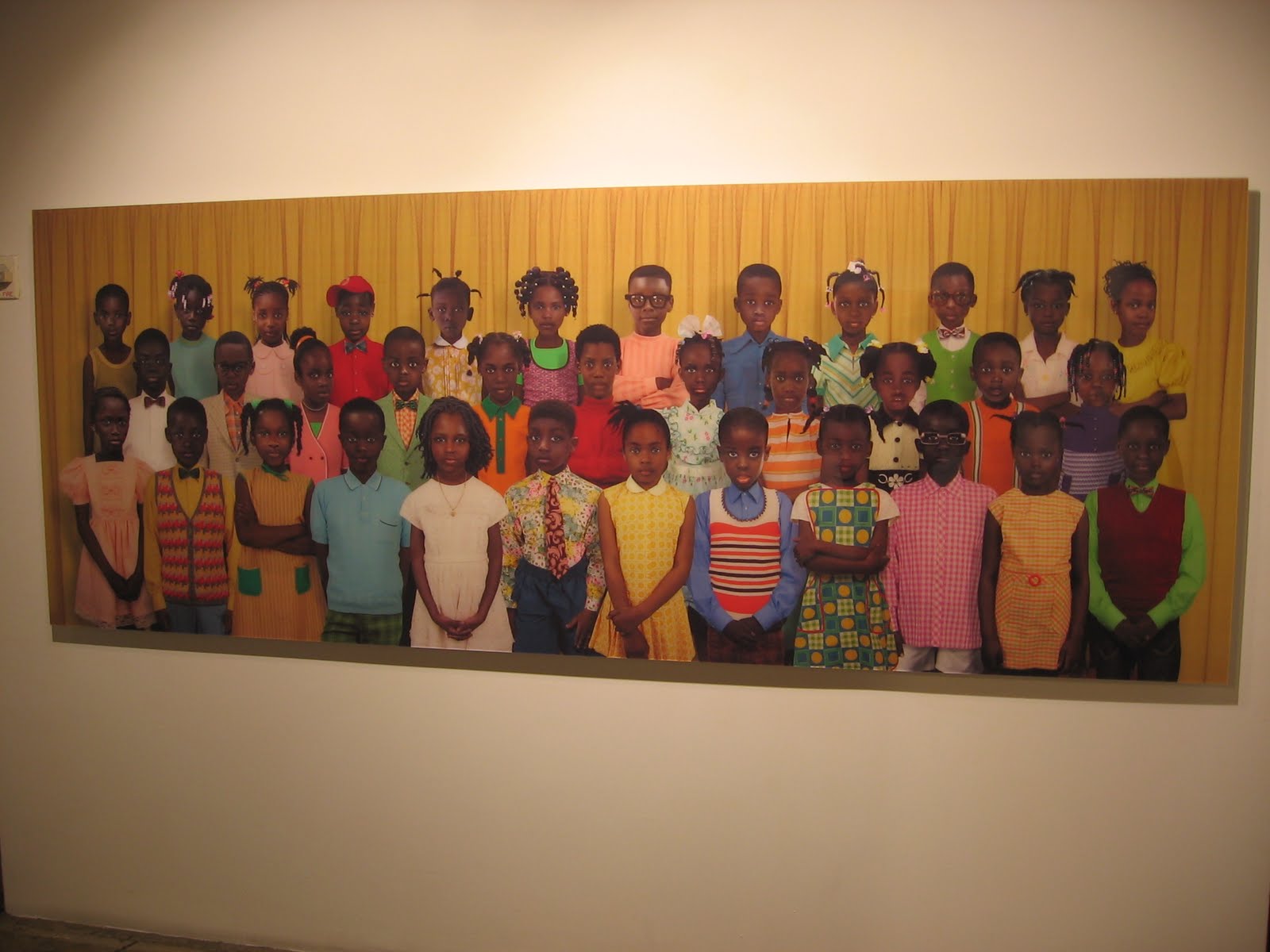 On one wall, all of the school children are black; on the other, it’s a predominantly white class with a lone black student. Subtleties of culture come out in bow ties and sweater vests, braids and barrettes, Peter Pan collars, striped turtlenecks, and bold, candy colored patterns, a range of faces lit by sparkly eyes and hiding underneath big glasses. In his prior work, van Empel used the natural environment of lily pads and flowers to create a kind of protected paradise for his subjects; in these works, he pushes on this concept of childhood innocence, but from a less fanciful and whimsical perspective; the formality of school creates boundaries and limits. The flatness of the compositions and the “optimized” children still make for an unnerving scene, but the entire effect seems better balanced with reality, closer to real life to make his tweaks and constructions all the more resonant.
.
This show only contains a couple of works and its location in the galleries in the back tests the viewer’s willingness to wander through another larger show to find the pictures. That said, I was intrigued to see how van Empel is evolving his style and finding new ways to situate his instantly recognizable characters.
.
Collector’s POV: The works in this small show are priced as follows. The two large images are priced between $59000 and $69000, depending on the location in the edition; the two small images are priced between $12000 and $14000, again in a rising edition. Van Empel’s work has recently become more consistently available in the secondary markets, with a handful of lots coming up for sale in any given year. Prices have been steadily rising, from roughly $15000 to up over six figures, with a sweet spot in the low 30s. Van Empel is also represented by Flatland Gallery in Utrecht (here).
.
As an aside, I think it would be fascinating to hang one of these van Empel school portraits together with one of Tomoko Sawada’s class pictures (all of herself) to see the contrasts/commonalities in style and message.
.
Rating: * (one star) GOOD (rating system described here)