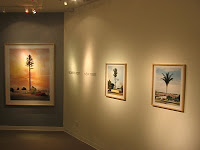 JTF (just the facts): A total of 17 color images, framed in blond natural wood with no mat, and hung against cream and grey walls in the main gallery spaces. The c-prints are available in two sizes: 60×50, in editions of 6, and 24×20, in editions of 4. There are 5 large prints and 12 small prints in the exhibit. The images were taken in various locations around the world between 2004 and 2009. A monograph of this body of work is being published by Steidl (here). (Installation shots at right.)
.

Comments/Context: The mobile phone tower is an excellent example of one of the necessary evils of modern life. While most people demand better coverage for their phones, town zoning boards and local residents aggressively fight the telecommunications companies to prevent the construction of massive eyesores that are visible from miles around. Both sides would like to somehow make these towers “invisible”, and the current solution favored by many is to dress the towers up to look like trees, so they blend in better with the surrounding environment. Or at least that’s the intention. German photographer Robert Voit has spent the past several years scouring the globe, making pictures of these cell tower trees. Voit trained in Düsseldorf under Thomas Ruff, and so has absorbed many of the conceptual lessons passed down from the Bechers. Each image is rigorously composed, with the tower centered in the frame, using consistent portions of land and sky and generally similar scale. Given the diversity of examples in the series, the various towers can be hung together in pairs and typologies to get at the underlying themes and variations in the artificial decorations.

The towers themselves are disguised as a dizzying array of species: there are palms and cypress, cacti and multiple types of evergreens, some with perfectly symmetrical branches, others with quirks and random limbs to make them look less fake. While a few do a satisfying job of blending into the environment, most have been transformed into caricatures of the natural world, odd sculptural forms that border on the absurd; it’s quite easy to wander around this show giggling at the insanity of it all. Stylistically, while the debt to the Bechers is obvious, Voit has clearly taken some of the foundation concepts and adapted them to his own artistic approach. In contrast to the meticulously uniform backgrounds employed by his predecessors, Voit allows a wide spectrum of colors to float behind his subjects, from washed out whites to deep blues with puffy clouds (there’s even a painterly pink and orange sunset). He’s also allowed more locally specific context into the frame, showing the base station buildings and more of the surrounding natural environment; several of the images juxtapose the fake cell tower tree with a real tree or two standing nearby. Finally, while the works are conceptual, there is an element of subtle humor and satire in these pictures that dissolves away the cool detachment that is the hallmark of many of his mentors and classmates.
Overall, this project contains a convincing mix of conceptual inversion and clever ridiculousness. As such, it has an element of fun that will broaden its appeal far beyond the usual crowd of ardent Becher adherents.
Collector’s POV: The prints in this show are priced as follows: the 60×50 prints are $9000 each, while the 24×20 prints are $2750 or $4000 (including the frame). Voit’s work has no secondary market history, so gallery retail is likely the only option for interested collectors at this point.
While I did like the large scale images quite well as individual pieces, I think these images will be most successful when hung together in groups. For those museums and collectors who are amassing a representative sample of the Düsseldorf school (or are planning the comprehensive retrospective for a decade from now), it seems obvious that a grid of 4, 6 or 8 of these small prints would be an important acquisition, especially since they represent the next generation of idea refinement (from the Bechers to Ruff to Voit).
Rating: * (one star) GOOD (rating system described here)
Transit Hub:
Robert Voit, New Trees
Through March 6th
Amador Gallery
41 East 57th Street
New York, NY 10022
Twitter| Facebook|