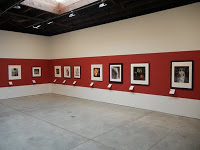 JTF (just the facts): A total of 51 black and white and color photographs, variously framed and matted, and hung against red striped walls in the main gallery space, two smaller side rooms, and the hallway that connects them. Each photograph is labeled with information on the person who chose the image (name, state, profession, age, race), along with quotes about why the image was chosen, what it meant to him/her, and opinions about Mapplethorpe and his work. There are 46 gelatin silver prints and 5 dye transfer prints in the exhibit. Dates range from 1976 to 1989, with a few posthumous prints mixed in. Edition sizes start at 4+1 and continue up to 15+3, with several intermediate sizes. Physical dimensions range between 10×10 and 23×19, most in square format. (Installation shots at right.)

Comments/Context: This exhibit is like a simple but well designed science experiment, testing the powers and limits of “crowdsourcing”. The story begins with 50 people, one individual from each of the 50 states, a broadly diverse sample based on age, gender, race, occupation, and lifestyle. This group was then exposed to a 2000 image online archive of the work of Robert Mapplethorpe and asked to choose one single picture each that was found to be of interest. These 50 pictures have then been displayed in no particular order as one gallery show, along with the comments and opinions of the participants on wall labels. As a construct, it seems like the kind of intellectually interesting idea that might produce something surprising or unexpected. What actually emerges from this process is something quite a bit less novel. The kind of imagery that apparently resonates with “everyday Americans” is a watered down, more conservative Mapplethorpe: obvious flowers, Lisa Lyons nudes, children, classical body forms, and celebrity portraits. This show contains almost nothing controversial or provocative, by any broad definition; the elegance and precision of Mapplethorpe’s art is what has risen to the surface, as embodied in generally safe subject matter.

While there are plenty of thoughtful comments, reactions and opinions expressed by the team of selectors (including by those who had never heard of Mapplethorpe before), I don’t think professional curators have much to fear from this kind of democratization. An entirely random selection of 50 works from the archive would have produced an almost equally effective show; the only difference here is that the “explicitness” meter has been quietly but consciously turned down by the participants. As such, even though the photography on view is as exquisite as ever, this show isn’t really about Mapplethorpe or even his legacy. It’s more an investigation of the respectful mainstreaming and popularization of art, of how we choose to see what we want to see, somewhat regardless of the originality or intent of the artistic voice. For me, the exhibit was a strong reminder of why we need smart curators who challenge and jolt us, who take chances, make connections and explain backstories. Left to our own devices, we’ll still enjoy the pretty pictures and happily pick our favorites, but we’ll likely miss (or ignore) an entire layer of potential understanding (sometimes uncomfortable) that might have made us actually stop and think more deeply.
. Collector’s POV: The works in this show are priced between $8500 and $105000, with the majority under $30000; a few images are marked “price upon request” or “not for sale”. Mapplethorpe’s prints are ubiquitous in the secondary markets, with dozens of images coming up for sale in any given year. Prices range from a few thousand dollars for obscure images to well into six figures for his most iconic and well recognized works.