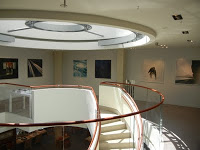 JTF (just the facts): A total of 15 large scale color photographs, framed in white with no mat, and hung in the atrium gallery space at the top of the store. All of the works are chromogenic prints made between 2009 and 2011. The prints on display are square format, each 40×40; no edition information was available. A monograph of this body of work is forthcoming from Aperture (here). (Installation shots at right.)
.

Comments/Context: Every time I see Rinko Kawauchi’s work, I am reminded that photography has not lost its ability to capture the pure unadulterated wonder of the world around us. Her images of seemingly mundane objects and fleeting moments are radical in their effortless simplicity and genuine freshness, her optimistic curiosity discovering child-like interest in things most of us would pass by without a second glance. Her shows have the effect of stripping away jadedness and cynicism, taking us back to a view of the world that is more naturally engaged and actively inquisitive. What I like about this newest selection of images is that they have been edited with much tighter hand, making the whole much more thematically coherent than previous shows I’ve seen, which have tended to wander with more randomness from subject to subject. Virtually all the pictures on view turn on their use of light. What might seem like a ridiculously overused photographic construct actually works here, as the images sparkle with flashes and beams of immaculate whiteness, on surfaces, in the air, and through the frame. Kawauchi’s light glistens through watery mist, glances off of a scooter side mirror, stripes a sidewalk, gets lost in the smoke of fireworks, slips through the forest, and passes through a transparent bubble. She jumps from the immensity of a solar eclipse to the minuteness of a tiny frog perched on a thumb, touching the tenderness of a dead swallow and the poetry of a swirling sea in between.

Regardless of her subject, Kawauchi never seems to lose sight of delicacy and openness. At first, a blast of flash against an ordinary pink rose at night seems harsh and amateurish; look again and it has a quiet haze that is quite remarkable. Even shots that might be mistaken for stock photography are somehow infused with her life affirming attention; it’s like we are being taught to see all over again. Kawauchi’s work doesn’t fit into any neat categories or curatorial frameworks; hers is an authentically original vision, and this well chosen small show is evidence of the power of an alternate viewpoint. Collector’s POV: This isn’t a selling show, so no prices were available. Kawauchi’s work has only recently entered the secondary markets; with only a few lots sold in various sizes, it’s hard to draw many pricing trends from so few outcomes. As a result, gallery retail is still the best option for interested collectors. I don’t believe Kawauchi has gallery representation in New York at the moment, so FOIL Gallery in Tokyo (here) will be the place to go.

Read more about: Rinko Kawauchi, The Gallery at Hermès, Aperture