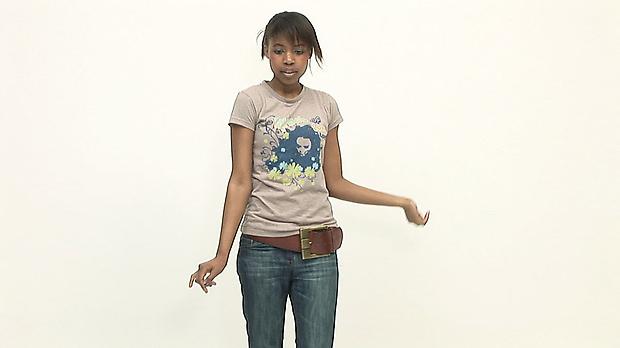 JTF (just the facts): A total of 3 videos and 4 large scale color portraits, displayed in separate darkened video rooms and hung in the north and south galleries. All of the photographs are larger than life size archival inkjet prints, each 48×40, in editions of 10, made in 2008 or 2009. The videos are:

Unfortunately, no photography was allowed in the galleries; as a result, there are no installation shots for this exhibit. The images at right were taken from the gallery website. (Still from The Krazy House, Liverpool, UK, 2008- 2009, at right.)

Comments/Context: If you actually take the time to watch all five segments of Rineke Dijkstra’s The Krazy House, to patiently stand there in the dark for the entire 25 minutes and drink it all in, I think it would be nearly impossible to leave the gallery without a broad smile on your face. Without a doubt, it is the warmest, most compelling and uplifting time I have had in an art gallery all year.
The artistic conceit at work here is relatively straightforward. Dijkstra constructed an all-white room in a Liverpool dance club, and she invited club goers to come and dance to their favorite tracks when the club was closed. At first glance, you might think that this concept has echoes of the simple, unadulterated joy of dancing found in the early Apple iPod ads or those from the Gap featuring swing dancers from a few years back, and on the surface, there are some parallels in terms of look and feel. But what is altogether more surprising is that Dijkstra’s video is actually about a process, like the fantastic transformation of a caterpillar into a butterfly. In each segment, the young person starts out timid, self-conscious, painfully aware of the ridiculousness of dancing alone in front of white wall for a camera. They are all shy and tentative, unsure of themselves, only trying out the simplest of their moves. But in each case, as they get more comfortable and feel empowered by the music, something spectacular happens: they blossom into amazingly beautiful individuals, giddy with freedom and lost in themselves.
. What is fascinating is how each person responds to the music, making movements that match their range of emotions. A young girl with lilting blond braids pulled back from her face slowly swings her hips, her bare arms waving over her head in a mellow trance. A young guy in jeans and a t-shirt rips his moves with choreographed precision, aggressively jerking his body up and down, exploding with energetic hand positions. Another young girl mouths the words, acts out the lyrics, and makes a heart with her fingers, as her bright laughter and huge contagious smile fill the room. And a young guy with long greasy black hair slashes his head back and forth with rhythmic, twisting drama, adding in ecstatic snippets of earnest air guitar for flair. The classic motif of the whole piece is at the end of his session, when the music stops and he closes himself back up: he lets slip a sly goofy grin, acknowledging his stolen moment of letting it all hang out. (Still from The Krazy House, Liverpool, UK, 2008-2009, at right.)
There are plenty of meaty ideas and questions buried in these dances, from how we attract others using constructed behaviors to how young people search for outlets for expressing themselves, and from how we assert our own personalities to how we protect ourselves from our own doubts and insecurities. In each case, the music takes over and the subject eventually lets his or her guard down to reveal something special and otherwise hidden. Dijkstra has also made still portraits of many of the women club goers, arrayed in their cheap finery and posed against uniform grey backgrounds in classic grace. These reveal much less than the videos, but raise many of the same subtle questions about the process of creating our identities. The other two videos in the show capture an array of children responding to art at the Tate Liverpool: in one, the kids verbally respond to Picasso’s Weeping Woman, and in the other, a single girl sits on the floor and makes a drawing in response to the painting. The first is particularly engrossing, as the children try to explain what they see. Like the dancers, in the beginning, the children are shy and uncomfortable, chewing on their fingernails, looking around, yawning, and fidgeting. Soon, they being to reluctantly talk about the colors they have picked out, and all at once, they seem to explode into a flood of increasingly fanciful ideas that build upon each other (the sliced three-screen display makes this interchange all the more swirling and chaotic). Like a wild jazz improvisation, the kids throw their ideas back and forth, connecting and embellishing them into imagined stories and creative vignettes, their individual personalities coming out from behind their common grey sweaters, white shirts, and red ties. In the abstract, Dijkstra seems to have captured the very essence of brainstorming, the uncontrolled conversational exchange where multiple perspectives interact and converge. In the second video, this coalescing occurs more subtly, as the single school girl sits quietly on the floor, looking back and forth between the picture and her pencil drawing, intermittently distracted by students nearby, until she finally becomes completely engrossed in her drawing and hardly notices the action around her. (Still from I See a Woman Crying (Weeping Woman), Tate Liverpool, 2009, at right.)
In all of these works, Dijkstra creates an inversion for the viewer, where the obvious subject turns out not to be the subject at all. These works are not about dancers or school kids exactly, but about the more complex idea of how we create and explore who we are, how we get immersed in something that lets us be free, if only for a moment. While some readers here might quibble that these artworks are mostly video not photography, I would respond that these videos are entirely photographic in their approach. The difference comes in that Dijkstra has tried to capture an invisible process not a subject, something that is fleeting and amorphous not stable, and a still frame just doesn’t provide the richness needed to describe the changing and morphing she is trying to document.
Overall, I found this to be a tremendously impressive and entirely thought-provoking show, full of original conceptual ideas, expressed with maturity and executed with confidence. Simply put, to my eyes, this is the most exciting and memorable body of new contemporary work I have seen this year.
Collector’s POV: The four photographs in this show are priced at 22000€ each. The three videos are respectively 65000€ (I See a Woman Crying), 50000€ (Ruth Drawing Picasso), and 85000€ (The Krazy House). Dijkstra’s photographic work has become generally available at auction in the past few years, with prices ranging widely, from roughly $4000 to $180000, with a sweet spot between $10000 and $50000. She is also represented by Galerie Max Hetzler in Berlin (here) and Galerie Jan Mot in Brussels (here).
Rating: *** (three stars) EXCELLENT (rating system described here)
.
Transit Hub:
Rineke Dijkstra
Through August 21st
Marian Goodman Gallery
24 West 57th Street
New York, NY 10019
Twitter| Facebook|