JTF (just the facts): A total of 69 color photographs and 5 videos, variously framed and matted, and hung in a winding series of rooms on the four floors of the annex galleries. All of the photographs are chromogenic prints, made between 1991 and 2009. Physical dimensions and edition information were not available on the wall labels. The show was curated by Sandra Phillips of SFMOMA and Jennifer Blessing of the Guggenheim. A hardback exhibition catalogue is available the museum shop for $55 (here). (Installation views of Rineke Dijkstra: A Retrospective, Solomon R. Guggenheim Museum, June 29–October 8, 2012 at right, courtesy of David Heald © Solomon R. Guggenheim Foundation.)

Dijkstra’s works can be easily categorized by subject matter. For each series, the title of the series is followed by the number of photographs/videos on view and their details:

Self Portrait: 1 photograph, framed in brown and matted, 1991

Comments/Context: Rineke Dijsktra’s brilliant mid-career retrospective at the Guggenheim is proof positive of just how consistently smart her twenty year investigation of photographic portraiture has been. In series after series, she has rigorously probed the edges and boundaries of the genre, producing a body of work that shows a continuing progression of increasingly original conceptual innovations. For the first time, I was able to trace the evolution of her underlying ideas, and to see how she has refined and evolved those constructs over time. It’s nothing short of a bravura performance, and I came away deeply impressed with the precision of both her observation and her thinking.

Unfortunately, the wacky configuration of the annex rooms at the Guggenheim makes following in her footsteps nearly impossible; the flow of the show is frustratingly broken up by the space again and again. While the exhibit might be characterized as roughly chronological, the limitations of the rooms lead to a few time jumps and misorderings that are distracting. To try to clarify the action, I’ve created a simple timeline that lists each project/series on view and the years in which Dijkstra made the pictures (small type, I know): 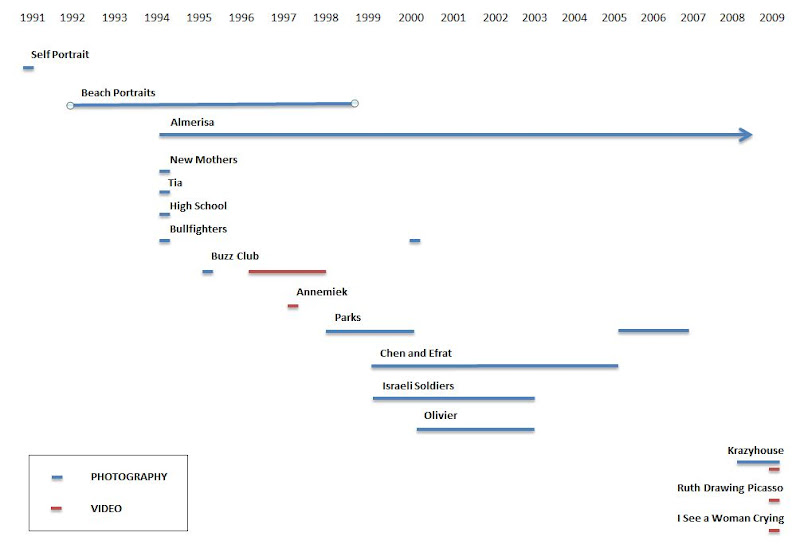 Dijkstra’s small self portrait, taken poolside in 1991 after a grueling rehab training session, is the “aha” moment that kicks off her career as an artist and holds the flash of insight that has informed her work ever since. In it, she stands exhausted and unadorned, with an almost feral intensity, unable to pose for the camera or compose herself. For the first time, Dijkstra had found a way to make a portrait of someone with their guard truly down; like Halsman’s jump portraits, this is not a fake smile or a pretend posture – it is the real person, open and honest, and it is mesmerizing.

Dijkstra’s now iconic Beach Portraits were the first photographs she made building on this newly discovered approach to photographic authenticity. She placed her subjects on the sand at the shoreline, standing in nothing but their bathing suits against the minimal backdrop of the sea and sky. Dijkstra consciously chose adolescent boys and girls for these images, avoiding older people who were already adept at concealing and protecting themselves in front of the camera. The result is a series of pictures that are intimate and personal, mixing timidity with gawky confidence, awkwardness with self-conscious striving. American kids try a little too hard, imitating the curvy pose of a fashion model or the male swagger of long hair and cut off shorts, while the Eastern European kids seem less spoiled, standing unapologetically in their underwear or a dated speedo, fidgeting and looking for a place for their hands. At nearly life size and with a strict attention to detail, the prints offer nowhere to hide; all the imperfections come through. The differences in how these teens present themselves are fascinating sociology, but each one tells the same uncomfortable story of a child trying to figure out who he or she is going to be.

1994 turned out to be an important year in Dijsktra’s early career. While working on the Beach Portraits, she was also simultaneously pursuing several other conceptual approaches to getting her sitters to reveal themselves more fully. One was an extension of the idea found in her self portrait: the exhaustion and conflicted emotion of an extreme physical experience. In her series of Bullfighters, she made pictures of the forcados just as they left the ring, their faces bloodied and their brocade jackets sweaty and torn. And in her series of New Mothers, she captured women naked with their newborns, just after they had given birth. In both cases, the portraits are alive with a kind of wide eyed shock, where pain and pride mix together with euphoric intensity. Another approach from this same year involved using an expanded idea of the element of time to uncover changes in a sitter’s personality. On a small scale, Dijkstra’s portraits of Tia (another new mother) taken five months apart show the minute, barely observable changes taking place, from her hairstyle to the freshness in her eyes. On a larger scale, Dijkstra’s multi-year (and ongoing) portrait of Almerisa tracks more complex adaptations. It chronicles both the growth from young girl through teenager to young mother, and the more subtle changes in clothing, appearance, and attitude coming in her transformation from lost refugee to assimilated Dutch citizen.

In this same year, she also began a preliminary investigation of uniforms, via portraits of high school kids in Liverpool, and soon afterward, she expanded and evolved this concept in her first video piece, The Buzz Club. In many ways, this video is the combination of several of Dijkstra’s existing conceptual threads, with a few new ideas thrown in for good measure. Club kids stand against a stark white background, dancing, smoking, drinking beers, chewing gum, and making out, while the soundtrack of the techno music thumps overhead. The girls and boys follow obvious patterns in outfitting themselves (thus the connection to “uniforms”): the girls have long hair and wear skimpy, come hither dresses (mostly black), while the boys have shaved heads and sport zipped up tracksuits. Instead of using still frames across time as she had done with Almerisa, Dijkstra has transitioned to video, creating a “moving” portrait that waits to uncover moments when authenticity intermittently shines through the role playing. Music is used as device to both relax the sitter and as something to focus on and get lost in; dancing becomes a way to break down the formality of the session. The overall effect is a swirling mix: shyness, boredom, swaying and hip shaking, bobbing heads and punching arm moves, staring down the camera and looking away in a trance. It’s an exercise in controlled appearances (slinky females, tough guy males) and the split second breaking down of inhibitions.

Through the end of the decade, Dijkstra continued to refine many of her original ideas: Annemiek was another video piece, where a lip synching girl in braces timidly alternates between being painfully self-conscious and being absorbed by the music, and the Parks series used calm groups of young people in leafy natural settings to look for glimpses of honest connection. Three new projects dominated the first years of the next decade and further evolved the time-based concepts from the Almerisa-series, but with a tighter focus on people undergoing a specific life-changing process or rite of passage. Twin sisters (Chen and Efrat) are followed year to year through puberty (with an echo of Nixon’s The Brown Sisters), young enlisted recruits in the Israeli army are seen side by side in their army uniforms and later in civilian clothes, and a young man in the French Foreign Legion (Olivier) is followed from his first day (and his subsequent military haircut) through to his emergence as a hardened, serious soldier three years later. In each series, nuanced shifts in maturity can be seen only by comparing the adjacent portraits; we see their emotions and personalities shining through in the cracks.

Dijkstra’s most recent works have once again returned to video, pushing further toward moments of intense concentration to look for unguarded personal revelations. In both Ruth Drawing Picasso and I See a Woman Crying, Dijkstra follows school children as they participate in art exhibitions. In their grey sweaters and red ties (uniforms as a motif once again), they engage the art through drawing and group discussion, and in both cases, the action starts out slow and tentative and builds to a crescendo of intense fixation and inventive, exuberant brainstorming, where hidden individual personalities start to take shape. The Krazyhouse reprises many of the the themes from The Buzz Club, but narrows down to explore the intensity of dancing more deeply. As I said in my original review of 2010 show at Marian Goodman (here), this is one of the most exciting pieces of contemporary art made so far in this century. Each of the longer length portraits of the five club goers has something to slowly reveal, and there is contagious joy to be found in the thrashing hair, the ecstatic air guitar, the sultry swing of arms, the frenetic chopping of hands, and the biggest smile you’ve seen in ages (not that any of the dumbfounded deadpan drones watching the video in the museum while I was there seemed to notice). Each dancer finally gives in to the music, lets go, and the flimsy walls of controlled self-presentation come down in triumphant warmth; it’s hard not to be amazed and inspired by such an intimate spectacle.

What I found most impressive about this consistently superlative body of work is how Dijkstra’s underlying ideas about the nature of portraiture have been evolving. While much has been made of her historic ties to Sander and Arbus, I think Dijkstra’s portraits start with these influences and then quickly move somewhere new. There is an enormous amount of experimentation and innovation visible here, all of it closely clustered around the challenge of getting people to show their true selves. Look closely and there are half a dozen important and original ideas: the aftermath of an intense experience, elapsed time and personal adaptation, the use of video as a patient way to let hidden nuances reveal themselves, uniforms and how personalities are influenced by them, the trance inducing power of music and how to incorporate it into portraiture, etc. etc. Don’t be fooled by the seemingly endless stream of classic-looking portraits – there are as many pyrotechnics to be seen here as in any photographic show in recent memory. For me, this retrospective helped me to see the entire spread of Dijkstra’s genius (not just her greatest hits) and to more fully appreciate just how much she has successfully challenged and expanded the traditions of photographic portraiture.

Collector’s POV: Given this is a museum retrospective, there are, of course, no posted prices. Dijkstra’s photographs have become generally available in the secondary markets in the past few years, with prices ranging from roughly $4000 to $180000, with a sweet spot between $10000 and $50000. Dijkstra is represented by Marian Goodman Gallery in New York (here), Galerie Max Hetzler in Berlin (here) and Galerie Jan Mot in Brussels (here).

Rineke Dijkstra: A Retrospective Through October 8, 2012