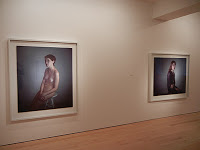 JTF (just the facts): A total of 11 large scale color images, framed in white and mounted with no mat, and hung in the entry and the single large gallery space. The works are unique Ilfochrome prints, ranging in size from 58×48 to 48×88 (or reverse). The images were taken between 2009 and 2011. A catalog of the show is available from the gallery for $30. (Installation shots at right.)

Comments/Context: Richard Learoyd’s camera obscura portraits encourage a kind of slowness that has almost been lost in our 21st century world; they are a throwback to the kind of imagery we associate with the greats of European portrait painting, albeit with a crispness that can only come from photography. They allow the viewer to stand and really look at another person, to quietly observe and explore the nuances of her face, hair, and clothing, down to the minute details that we would normally miss in our haste. The dull grey background offers no distractions, and the soft light directs the gaze back to the sitter, where delicacy and vulnerability have been gracefully exposed. 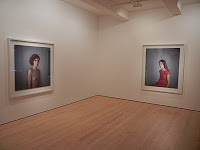 Learoyd seems to be optimizing his artistic process over time; there are a higher percentage of magical portraits in this show than in his previous exhibit, and there are a handful images here that are truly engrossing. The sitters are understated and unconventional in their simple beauty, but striking nonetheless when looked at with such meditative intensity. When he gets the balance just right, the pictures alternate between the specifics of a young woman and the shimmering abstraction of something more universal and metaphorical (the spell is broken in the images of grizzled and tattooed men, who seem too literal). The fold of a gauzy blouse, a drape of red hair, a mesmerizing stare, a gentle shoulder of translucent skin: these are the small facts that suddenly seem so inspired and breathtaking.

Since all the images are unique, I have begun to get the feeling that there are astounding Learoyds and just OK Learoyds, and honing in on one of the best ones is very important. Nancy Recovered, Carla 2, Carla Nude, Tatiana in Patterned Dress 1, and The End of Youth were my particular favorites, with the rest dropping off into a zone where the enchantment is quite a bit less successful. But these few are still worth a special detour, if only as a reminder of just how spectacular portraiture can be. 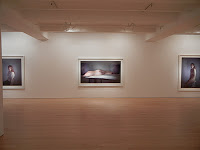 Collector’s POV: The works in this show are priced between $45000 and $50000, based on size. Learoyd’s prints have very little secondary market history, so gallery retail is likely the best option for interested collectors at this point.
Rating: ** (two stars) VERY GOOD (rating system described here)
Transit Hub:
Richard Learoyd: Portraits and Figures
Through October 29th