JTF (just the facts): A total of 55 images of various formats and sizes, all portraits, shown against dark grey walls, throughout the entire skylit gallery. Negatives from five decades, beginning in 1940s. 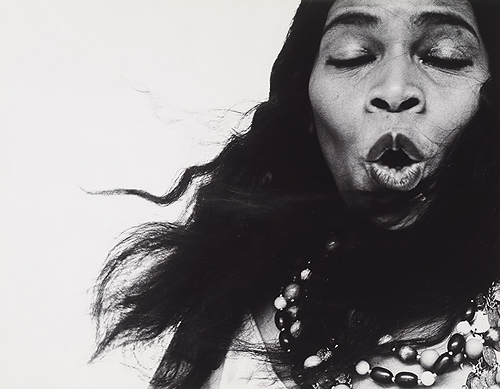 Comments/Context: Richard Avedon’s minimalist frontal portraits against white or grey backgrounds have a style and intimacy unlike most anything else in the history of photography; a high contrast Avedon portrait is hardly ever mistaken for that of another artist. In this show, a slice of his work has been pulled together under the common theme of “performers”, and includes portraits of famous and not-so-famous artists, actors, writers, musicians, dancers, and singers. (Marian Anderson, contralto, New York, June 30, 1955, at right.)
This exhibition has few surprises in terms of undiscovered or “new” images. Most will seem like familiar friends as you tour the gallery. There is however an interesting set of contact prints from a 1949 session with Truman Capote hung back behind the main wall that shows part of the editing process Avedon went through after the film was developed. Otherwise, it’s an excellent (if well-known) parade of Marilyn, the Beatles, Dylan, and Charlie Chaplin. Our particular favorite was the image of Nureyev’s foot from 1967. Collector’s POV: The images in this show are a mixture of vintage and later prints, priced between $11000 on the low end and $850000 at the top. There is a large amount of Avedon’s work consistently available in the secondary market, as many of his most famous images were made in editions and portfolios of 50, 75, 100, and even 200 prints (Natassja Kinski and the Serpent as an example of the largest of edition size). A new book, Richard Avedon: Performance, is also available (image at right). The Richard Avedon Foundation website can be found here.
Rating: * (one star) GOOD (rating system described here)
Richard Avedon: Performance
Through January 3rd
Pace/MacGill Gallery
545 West 22nd Street
New York, NY 10011
Twitter| Facebook|