JTF (just the facts): A total of 45 black and white photographs and works on paper, variously framed and matted, and hung against white walls in the two rooms of the gallery and the foyer. The works were made over 50 years (1957 to 2007) and range in size from roughly 4 x 4 inches (on 10 x 10 inch mounts) to 37 x 17 inches. Each work is, as the subtitle says, unique. (Installation shots below.)

Comments/Context: To those of us who hold Ray Metzker’s photographs in the highest regard, it is a continual puzzlement (and annoyance) that our opinion isn’t more vigorously confirmed by the public. Not many artists can match the unflagging inventiveness he has maintained, or the honors he has earned, over 50 years. And yet, among otherwise well-informed art goers, his name often results in a blank stare or a misspelling.

This state of affairs poses several questions. Would his profile be raised if he had chosen to teach and party in New York or L.A. rather than in Philadelphia? Or is Metzker’s art itself to blame? Is it too neat and buttoned-up? Do his photographs lack the fleshy human warmth found in the popular work of his Chicago teacher Harry Callahan? Or does Metzker’s career indicate that the historical divide between art photography and contemporary art—with their separate auctions and museum departments—may never close, forever limiting appreciation for some of America’s living masters?

This handsome survey doesn’t try to answer such questions, and doesn’t need to. As in the 2011-2013 touring retrospective organized by Keith Davis, the strip-assembled “Composites” from the 1960s to the present again form the hub of his wheel. It has more spokes that most of us have suspected. Even the  works here that did not make Davis’s cut—abstract cut-outs of blank construction paper; muzzy photographic drawings with darkroom chemicals—are nonetheless manifestly Metzker in their crafty treatment of shadow and light.

The chronology begins with examples from his student years (1956-59) at the Institute of Design in Chicago. Two prints from 1957, multiple exposures of Chinese lanterns flush with light, taken at his family home in Milwaukee, are very Bauhaus; whereas three 1956 photographs, of found material on the streets of Chicago, including a Demuth-like numeral 5, are homelier, as if Metzker had been studying Aaron Siskind.

Many of Metzker’s “Composites” have two hyphenated dates, the first year indicating when a strip (or strips) of film was (were) developed, the second year denoting final assembly of the pieces. He may store away a contact sheet of images if he can’t find an immediate use for it, the way sculptors hold on to favorite hunks of lumber or metal; Metzker may not pull these strips out of his archival drawers until decades later.

His desire to rebottle old wine can make it difficult to tell whether or not which works, or parts of works, should be labeled “vintage.” Composites: Anonymous, 1962-1992, is a typical example. A crossword puzzle of 144 deeply shadowed faces and torsos, individuals arranged in a crowded grid 11 across and 14 down, the piece is related to a number of photographs he made in the early-mid 1960s on the streets of Philadelphia and around the aptly named Hotel Terminus. He did smaller sets of serial images of these passersby then, but not until 1992 did he decide to compose a symphony of their faces.

Metzker has a binary temperament, his work cleaving sharply between country and city, and these are perhaps his most grimly urban. Strip Tease #11, ca. 1968, an overlapping four-panel panorama of a five-lane traffic jam, is a smoggy reminder why he has periodically retreated with his camera to be among grasses and trees.

One of his masterworks from the ‘60s is an untitled high-contrast multiple print, number “69 KC-MX,” from 1969. The left side is a stark silhouette of a city landscape, where rooftops bleed into a jagged skyscraper and a streetlamp droops like a comma against the sky. These structures are repeated upside down and right side up. On the right side is a double-photograph of parking spaces on a street, with a No Parking street sign in the foreground and a grassy median strip with a few cars parked on a diagonal in the background. The photograph has a thick black frame and is interrupted by what seems like the trunk of a tree.

What’s remarkable is that these discordant elements cohere, if just barely so, because Metzker has put them together to resemble an old-fashioned view camera: the darkened buildings form the solid body and bellows, while the framed image (of the parked cars) is the result, a stereographic plate. Even when photography isn’t overtly the subject of Metzker’s pictures, metaphorically it usually is.

Among several curiosities here are four untitled works from 1974 made from folded or hole-punched paper. Exercises in positive and negative space that, in truth, never entirely transcend their origins, they have the same sharp-edged whimsy as his photographs. And even though they are “pure” abstractions, each is a sort of sly homage to an artist or historical style: CP-3 is like a Louise Nevelson in its stacked rectangular doors and windows; CP-4 has crescent moon scoops, a signature shape of Larry Poons; while CP-2 and CP-5 are by turns loosely and densely spaced cuneiform, what bookcases might look like in Carl Andre’s loft.

Five “light drawings” from 1996 and one from 2007 show Metzker playing around with darkroom chemicals. He has swooshed them around the paper the way that Morris Louis and Helen Frankenthaler spilled thin veils of acrylic paint. The soft, dark masses in Metzker’s prints resemble the desert landscapes of J.B. Greene and the stormy funnels and clouds can’t help but recall Stieglitz’s Equivalents.

Whether Metzker has looked backward or forward, making camera-less photographs or intricate, jittery collages of bridge overpasses and fire escapes, he has never stopped loving photography, recombining its basic materials and testing its limits. Today’s young artists, so intent on deconstructing the medium, should be far more aware than they seem to be of this gloriously unpredictable and experimental artist.

Collector’s POV: The works in this show are priced between $7500 and $65000. Metzker’s work has only been intermittently available in the secondary markets in recent years, with prices ranging between roughly $5000 and $69000. 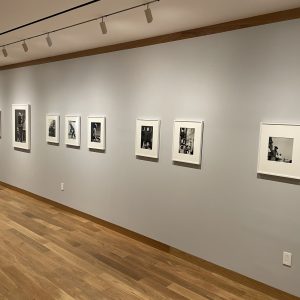 JTF (just the facts): A total of 29 black-and-white and color photographs, generally framed in white and matted, and hung against white walls in the single room gallery space and ... Read on.