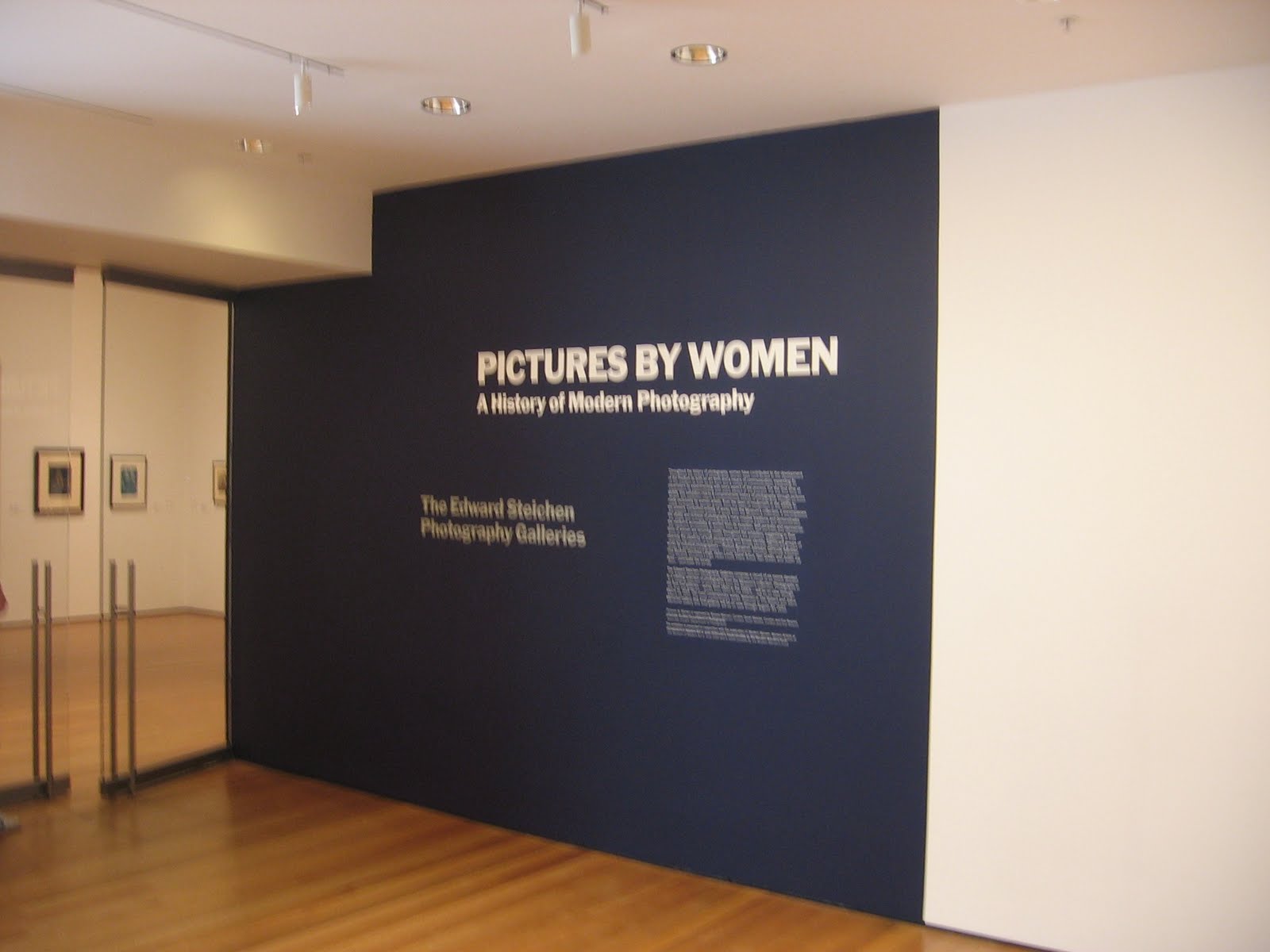 JTF (just the facts): A historical group show, containing 211 works from 106 photographers, spanning the period from 1850 to the present. The exhibit is roughly organized in chronological order, filling all six rooms in the Steichen galleries on the third floor of the museum. All of the works on display were made by women and come from the museum’s permanent collection. The exhibit was curated by Roxana Marcoci, Sarah Meister, and Eva Respini. Comments/Context: One way to think about the history of photography is to imagine it is a massive, monolithic database of imagery that can be searched and sorted using a variety of keywords. Exhibitions can be drawn from the database using slices of like works, often grouped by geography, time period, photographic process, subject matter, or movement, or some combination thereof (1920s German portraiture or 1970s American color etc.). While the ideas may be abstract, we have all come to accept these characteristics as valid identifiers, in terms of using them to understand trends in the evolution of the medium.
What we really have here is a new twist on the annual refreshing of the permanent collection display. Starting from the unfocused list of all photographs ever made, this show uses three filters to generate its contents: photographs in the museum’s permanent collection, photographs made by women, and then, for the most part, photographs made of women (primarily female portraits). In general, the other subject matter types (landscapes, nudes, still lifes, city scenes, abstracts, process exercises etc) have been stripped out. I must admit up front that when I heard about this show, my first reaction was that it was a pretty thin and unimaginative premise for a show that would be on display at the MoMA for over 10 months. In all of our years of collecting, we have never once selected a work based on the gender of its maker, nor have we paid any attention to religious beliefs, race, sexual orientation, or other social modifiers when evaluating the merits of the work at hand – these characteristics just don’t seem to have any bearing on or relevance to our choices. We have plenty of images by women photographers from all periods in our collection, but they are there not first and foremost because they were made by women, but because the pictures moved us in some meaningful way. So let’s just say that I came into this exhibit with a healthy dose of skepticism that such a thematic construct could be particularly enlightening. I’m happy to report that the show delivers more than I expected in terms of ideas, and that there are some unusual conclusions to be drawn from this somewhat obvious intellectual exercise.The show is organized chronologically, and the first room contains images representative of the entire 19th century and Pictorialism, beginning with an Anna Atkins fern cyanotype and anchored by portraits by Julia Margaret Cameron and images of motherhood by Gertrude Käsebier. (Julia Margaret Cameron, Untitled, 1867, at right above, second from top.) All of these works are rooted in the traditional and allegorical roles of women, with family and soft-focus femininity the main subjects. The second room is devoted to between the wars Modernism and the avant–garde. Many of the images on display are head shot portraits, but with a much more modern or Surreal aesthetic – short hair, challenging looks, and distortions. Works by Tina Modotti are the cornerstone of this section, a potent reminder of the political awakening that was taking place at that time. There are plenty of great abstracted images on view: Bourke-White’s blast furnaces, Henri’s windmills, and Krull’s rail tracks and city scenes. (Margaret Bourke-White, Blast Furnaces, Ford Motor Company, c1930, and Florence Henri, Windmill Composition, No. 76, 1929, at right above, fourth and third from the top respectively.) While there are many unknown names here as well, I think a strong case has been made for the important influence of women photographers during this period. I only wish the Cunninghams that were chosen had been more memorable.

The next room, which ostensibly traces the period between roughly 1940 and 1965, is shockingly weak. Aside from the tremendous works by Dorothea Lange, it is as though this entire period is empty of standout women photographers – beyond the addition of Lisette Model, the two-decade hole is so large that you could drive a truck through it. (Dorothea Lange, Child and Her Mother, Wapato, Yakima Valley, Washington, 1939, at right above, fifth from the top). The Lange works on display are all of women, which seems a bit misleading to me, in that I’m not sure we can defend a particular focus on women in her work – there are just as many great works of men and children as there are of women, Migrant Mother notwithstanding. One whole wall in this room is devoted to the work of Helen Levitt, which is altogether appropriate; what is surprising is that it is her 1970s/1980s color work rather than her earlier and better known black and white images. The only logic I can come up with for why these works have been placed here is that stylistically, they flow better with this time period, even though they were made decades later, or perhaps the early works didn’t have enough women in them. In any case, the color works are to be savored for their warmth and humor; I particularly enjoyed the snowcone seller, the telephone pole and the tilted phone booth all in one chaotic frame. (Helen Levitt, New York, 1977/2005, at right above, sixth from the top.) The dead zone in this show continues all the way until Diane Arbus and Hilla Becher in the later 1960s, found in room 4. In this room, we start to see the real flowering of feminism, of women artists taking on subjects that are important to women with candor and directness, as well as a stronger overlay of conceptual artistic thinking. It is clear that the 1970s was the time when a distinct female point of view become readily apparent in photography. I particularly enjoyed the Carolee Schneeman grid of fragmented faces as well as the more subtle Jan Groovers hidden on the back of a dividing wall. (Jan Groover, Untitled, 1981, and Carolee Schneeman, Portrait Partials, 1970, at right above, eighth and seventh from the top respectively.) While there is a well known color Cindy Sherman from the early 1980s in this room, I was left dumbfounded as to why a classic black and white late 1970s Sherman film still was not included; it seems like such an obvious choice, given the tremendous influence of this series in the history of photography.

In the fifth room, which covers the last two decades of the 20th century, the women photographers really start to gain momentum, taking leadership positions in the forefront of the medium and in contemporary art more broadly. The bench is much deeper here, with Sherman, Kruger, Simmons, Levine, Lawler, and many others all in top form. The focus on women’s issues is tighter and the collective voice is much more challenging and sarcastic. A group of images by Nan Goldin covers an entire wall and fills the room with harsh emotional intensity. The subtly scathing works of Mary Frey were a discovery for me; I particularly enjoyed a staged bedroom scene with the caption “Her routine was predictable. Somehow he found this reassuring.” (Mary Frey, Untitled from Real Life Dreams, 1984-1987, at right above, ninth from the top.) Again, there are lots of portraits of women, examining women’s lives with more caustic skepticism. The last room of the show covers some of the same ground, while bringing us up to the present. The divided gallery is dominated by large pieces and multi-image series. In many ways, the current works seem like a further extrapolation on many of the same ideas, identities and types, just on a larger and riskier scale; the overall direction is however more diffuse and less obvious. I think the toughness and sheer strength of Carrie Mae Weems‘ installation blows everything else away in this room. (Carrie Mae Weems, Selection from From Here I Saw What Happened and I Cried, 1995, at right.) That said, Rineke Dijkstra’s series of portraits of the same girl over time (echoing at least in concept Nicholas Nixon’s The Brown Sisters) is a surprisingly evocative coming of age story, complete with a baby at the end. I also found Valérie Belin’s humongous, too-perfect head shot portrait of a mannequin delightfully disturbing. (Valérie Belin, Untitiled 03010905, 2003, at right below.) My only remaining questions were: where are Catherine Opie and Shirin Neshat? How could they have been omitted from this narrative? (I could probably make a case for Candida Höfer as well, although her lack of “women-focused” subject matter likely pushed her to the cutting room floor.) Overall, I found the last gallery much less coherent that I might have hoped; I think MoMA missed a chance to designate with some force who has been important in women’s photography in the past 10 years.
Underneath it all, this is a routine rehanging of the permanent collection of photography. And yet, this exhibit seems less like an alternate history of photography, and more of a history of women’s ideas about themselves, as embodied by changes in photographic output. If the distribution of the sexes in the galleries is any signpost as to who will find this show of particular interest, then women are undeniably drawn to this story; in nearly every room I was in, the ratio of women visitors to men visitors ran between 2 to 1 and 3 to 1. This show is full of choices and challenges, barriers and emotions, with much more narrative than I ever would have expected. What I found most memorable about this show was the perhaps obvious idea that in the early 1970s we saw an explosion of innovation by women photographers, a flowering of self-examination that is still occurring and reverberating decades later. I also came away with the tentative conclusion that Diane Arbus was even more of a historical linchpin than I had given her credit for; given what I saw in this show, she emerges out of a long dry spell to create groundbreaking and iconic pictures. It appears there really was no other woman of her stature at that time until Cindy Sherman arrives on the scene several years later.
Make no mistake, this is an uneven show, with great works hung next to more forgettable pictures, and a spotty distribution of master photographers across time. But overall, the exhibit does uncover intriguing trends in the history of photography that can only be found when seen though the filter of gender. As such, I think its scholarly merits lie not so much in the specific works on view, but in the overarching waves of ideas that the chronological groupings expose.
Collector’s POV: This kind of a broad museum survey isn’t a great place for a discussion of gallery/auction prices or market dynamics. So we’ve highlighted a few favorites, but dispensed with the usual discussion of pricing trends.
Rating: ** (two stars) VERY GOOD (rating system described here)
Transit Hub:
Pictures by Women: A History of Modern Photography
Through March 21, 2011
The Museum of Modern Art
11 West 53rd Street
New York, NY 10019
Twitter| Facebook|