This is Part 2 of our 2015 Frieze New York Art Fair summary. While it is certainly possible to enter any of our reports directly, for more general background information on the fair and further information on the structure of these slideshows, head back to Part 1 (here). 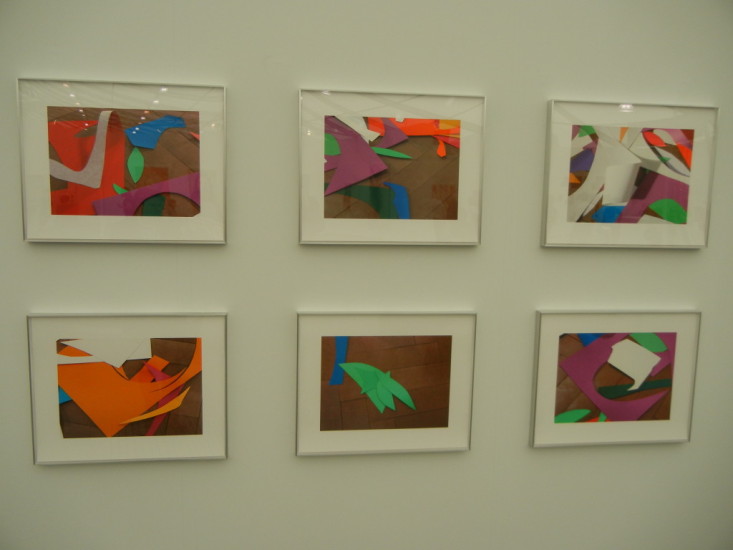 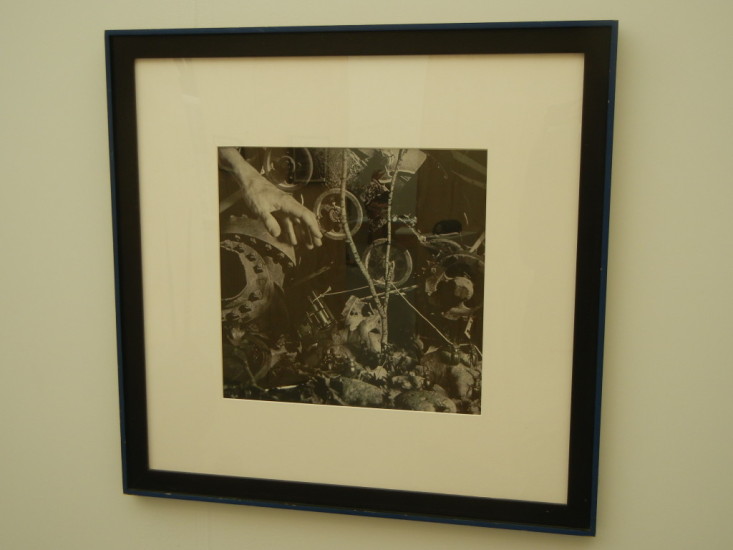 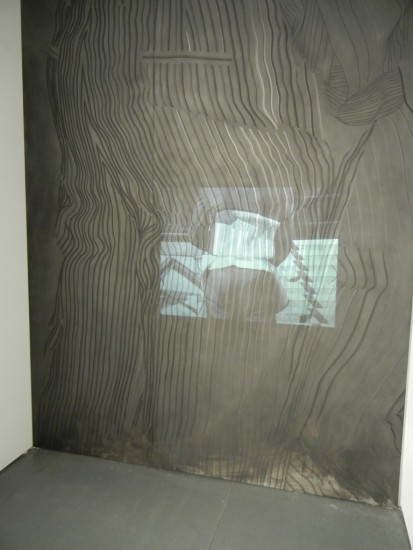 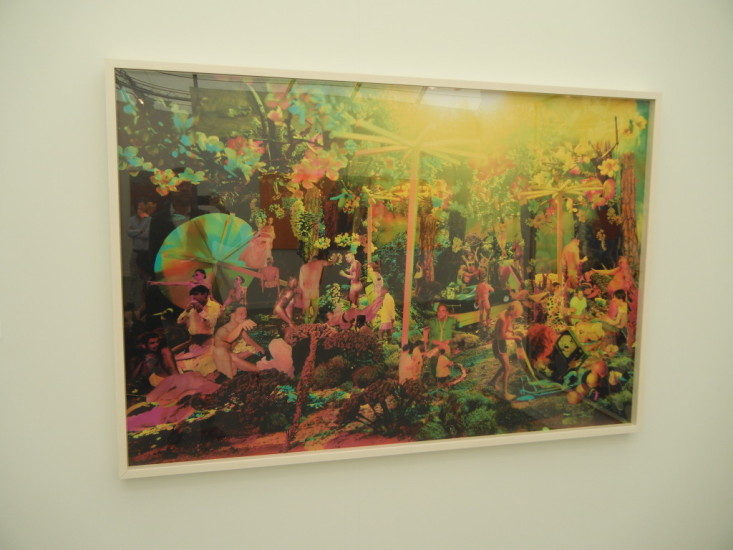 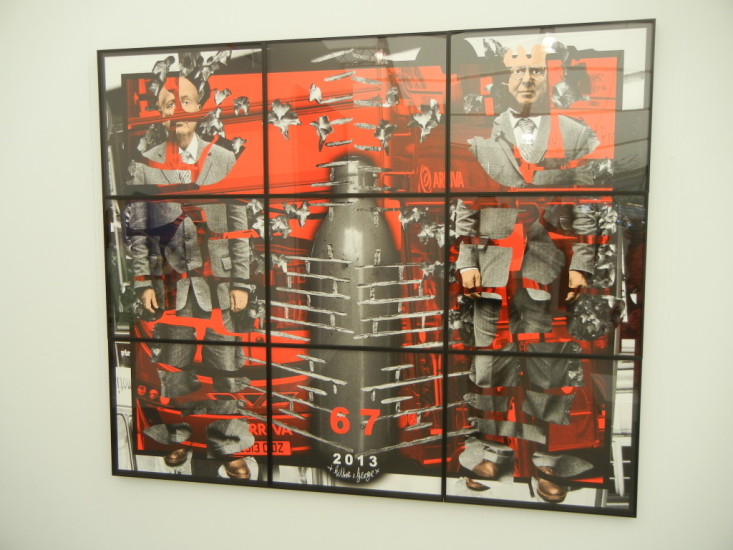 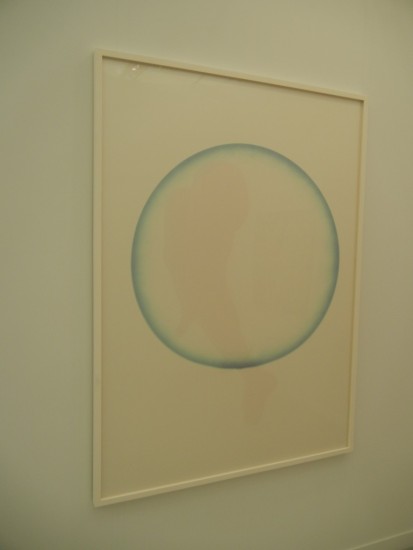 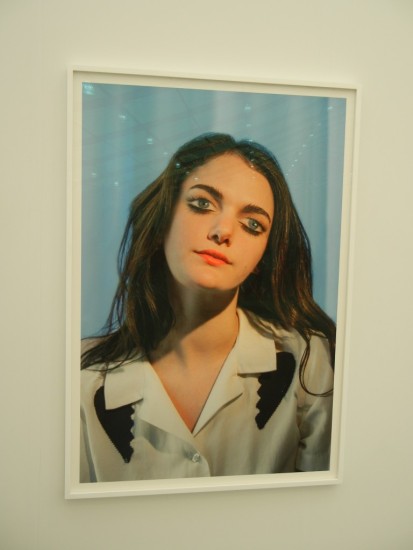 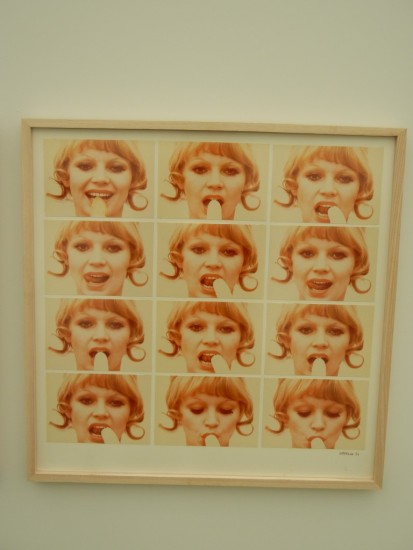 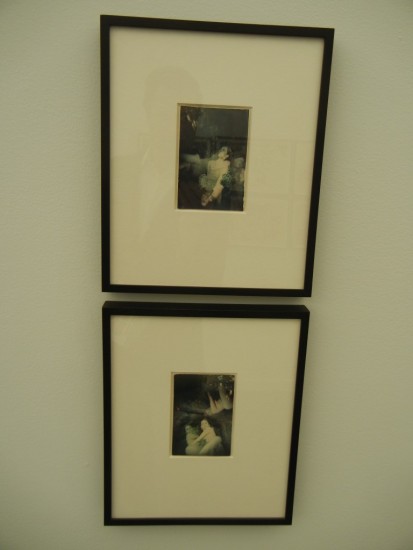 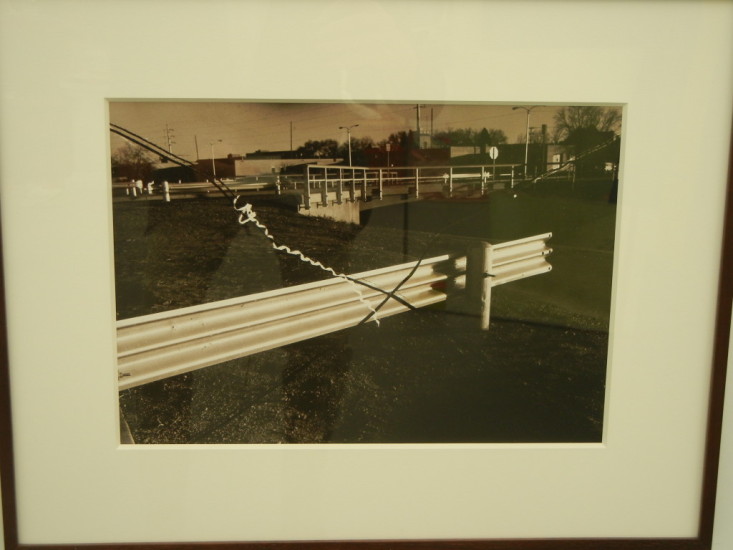 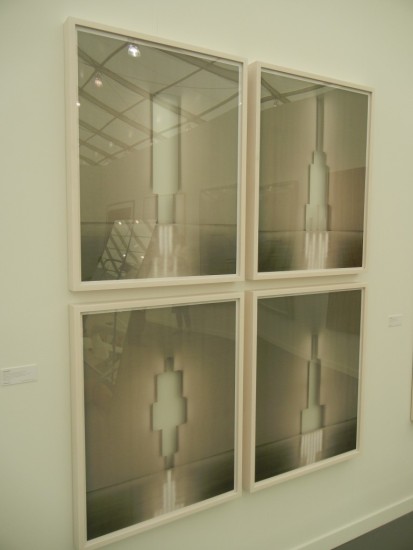 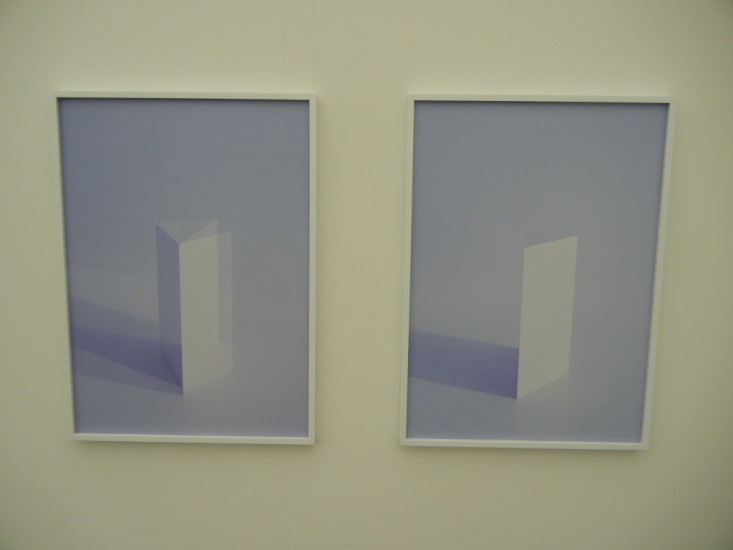 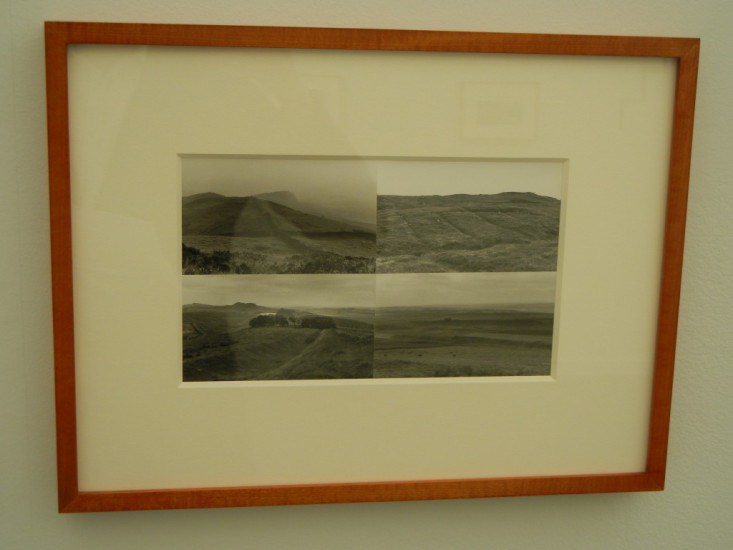 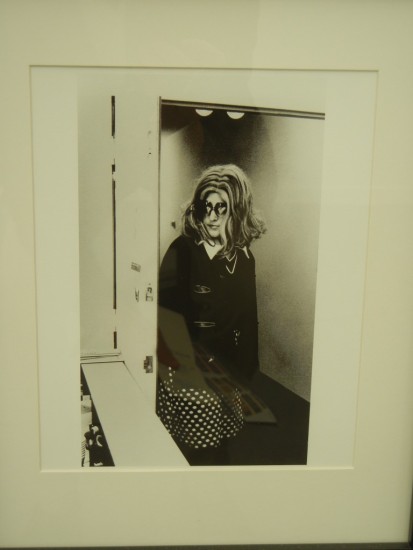 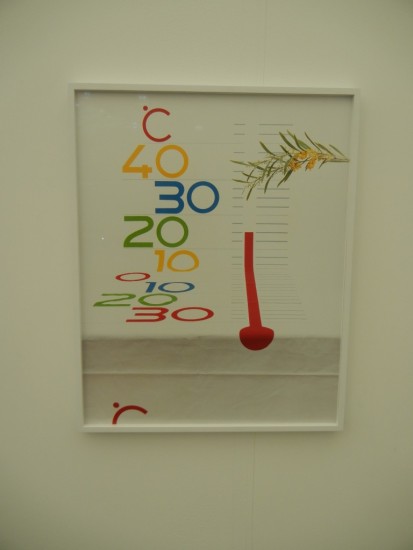 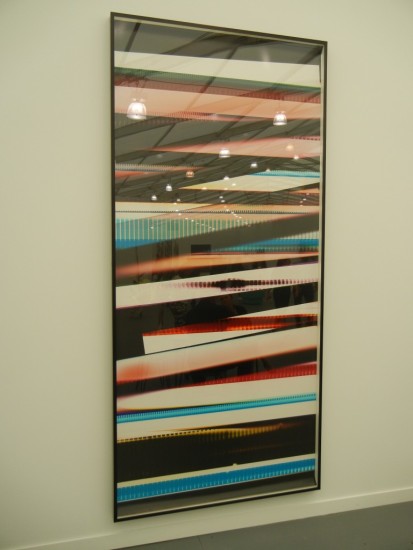 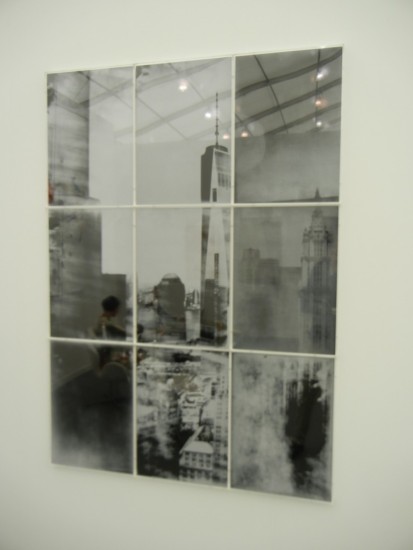 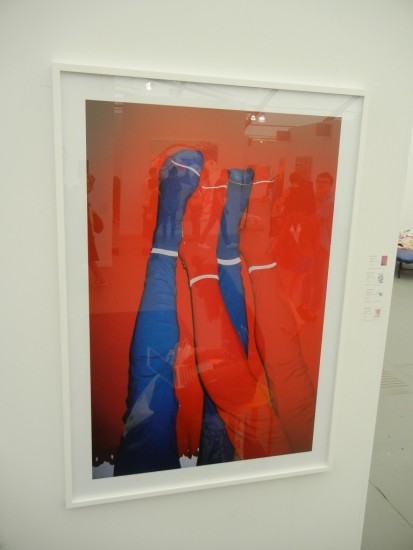 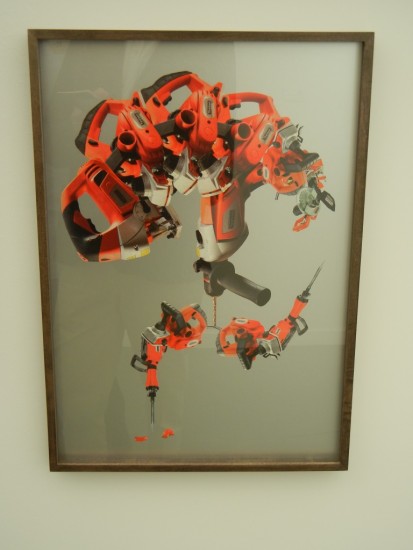 PPOW Gallery (here): A densely layered David Wojnarowicz still life (vintage, in the original frame) with bugs seemingly holding a gun to the outstretched hand, amid the turning circles of rusted cogs and gears. Priced at $40000.

Frith Street Gallery (here): This Fiona Banner video installation is a series of still images of London made by Magnum photographer Paolo Pellegrin, shown against a pinstriped backdrop and accompanied by ambient sound/music. Businessmen, stock exchanges, and city vistas whirl by with a decidedly incisive tone. Priced at £65000.

Galerie Thaddaeus Ropac (here): This new Gilbert & George work employs more compositional layering than usual. Anchored by a central enlarged whippet, the artists dissolve into lines of brick and stonework, allowing the background images of city buses to peer through. The picture also recalls the stark red and black palette of their early works. Priced at $135000.

Cheim & Read (here): This new work from Adam Fuss feels like a return to his earlier water photograms. The original rings of ripples have been exchanged for a soft light blue bubble and reversed in an ethereal white. Priced at $65000.

Salon 94 (here): The best of Laurie Simmons’ new overpainted eye portraits are jarringly unsettling. Something about the casual tilt of the head here makes the vacant stare even more unnerving. Priced at $42000.

Hales Gallery (here): This booth was a solo show of the work of Carolee Schneemann, and in particular, a selection of images (both vintage and modern) from her 1966 performance Water Light/Water Needle. These vintage multiple exposure nudes capture some of the kinetic movement of the action. Priced at $80000 for the pair.

Derek Eller Gallery (here): I continue to find Thomas Barrow’s 1970s cancellations engaging. This one uses both a black X and a white squiggle to interrupt the shining road barrier. Priced at $5800.

Sean Kelly Gallery (here): New works from Jose Davila find him reinterpreting Dan Flavin light sculptures, his cutouts leaving behind the abstract forms of the fluorescent tubes and the soft glow of the light. I like how the bright reflection on the polished floor gives a sense of the original. Priced at $40000, for the set of 4 prints.

The Approach (here): These new works by Sara VanDerBeek have been pared down to geometric essentials and cast shadows, a single form becoming doubled and overlapped. Priced at $10000, as a diptych.

Espaivisor (here): Early Hamish Fulton 4-image works, before he started to mix text and photography. These foot-level views of England show the beginning of his walking-centric aesthetic. Priced at $54000.

Gallery Paule Anglim (here): This booth featured a wall full of artworks and documents from Lynn Hershman Leeson’s 1970s portrayals of her alter-ego Roberta Breitmore. I like the illicit sneaking feel of this image.

Taro Nasu Gallery (here): This is one of Takashi Homma’s new camera obscura works. The Freedom Tower seems ominously engulfed in smoky blur, like a modern beacon rising from burning destruction. Priced at $12800 for the set of 9 images.