While I doubt the ADAA Art Show will ever be known as a venue for radical risk taking, there was a sense of freshness in the air at this year’s fair that broke up the usual hushed mood at the Armory. While this fair has typically had a more quiet and refined atmosphere, slightly older crowds, and a tighter/safer mix of modern and contemporary art than its competitors, there was meaningfully more photography on view this year than in prior years and a bit more mixing it up in terms of booth curation. The best moments of the fair are to be found in the solo booths (13 with photography), where thematic clusters of work provide more artistic context (and breathing room) than the usual one-of-everything jumbles.

The slideshow below contains photographic highlights from various booths, with corresponding commentary, lists of photographers/artists with work on view, and prices where appropriate. 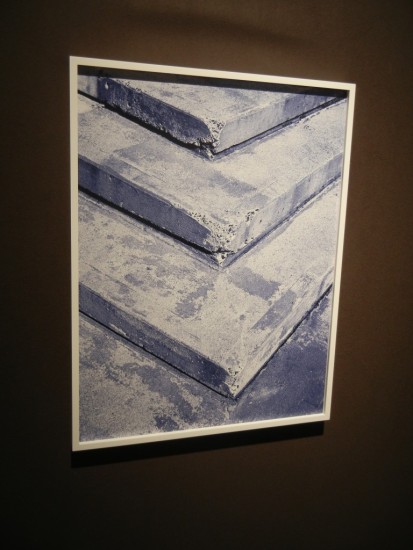 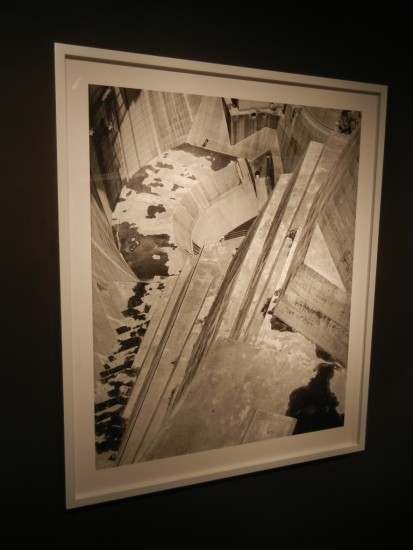 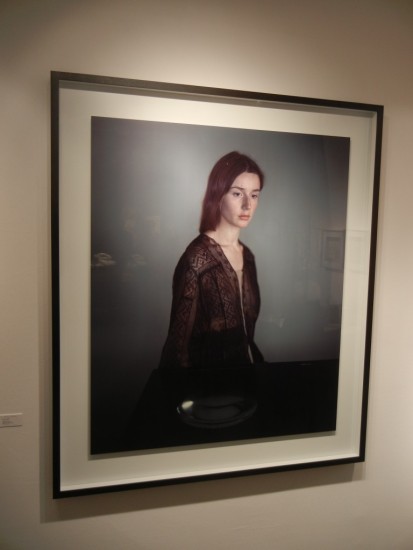 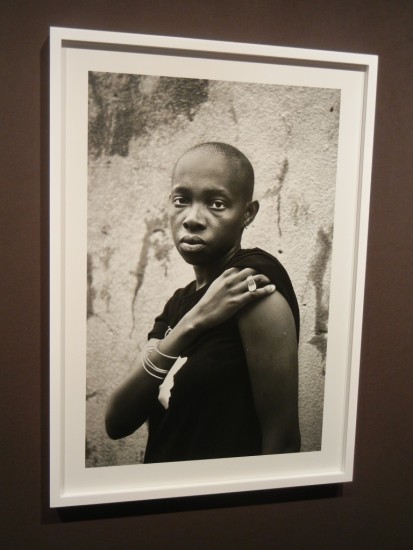 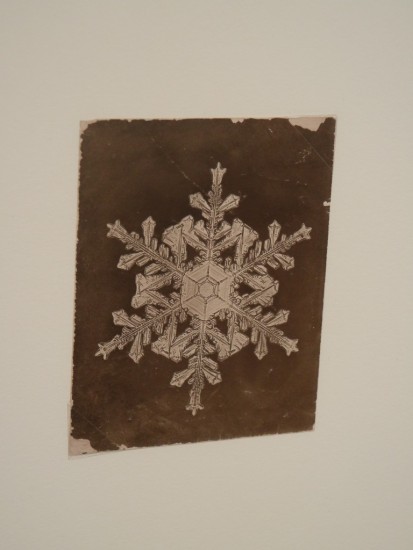 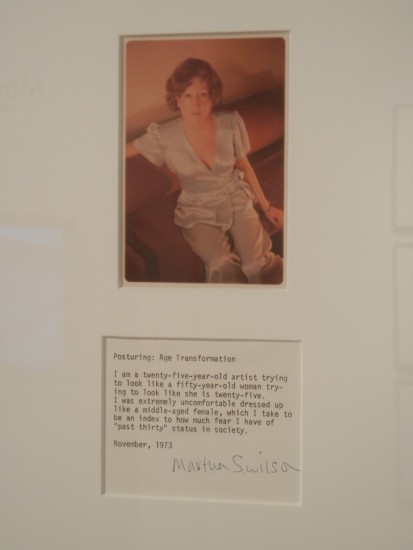 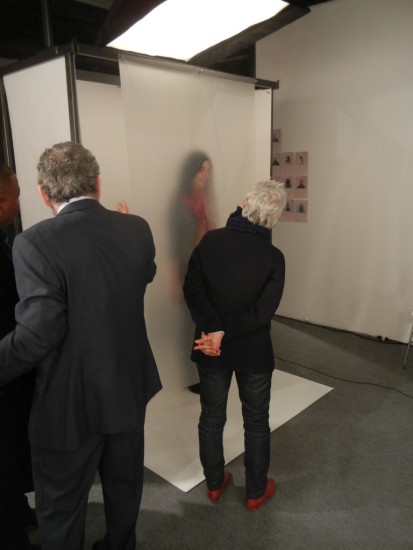 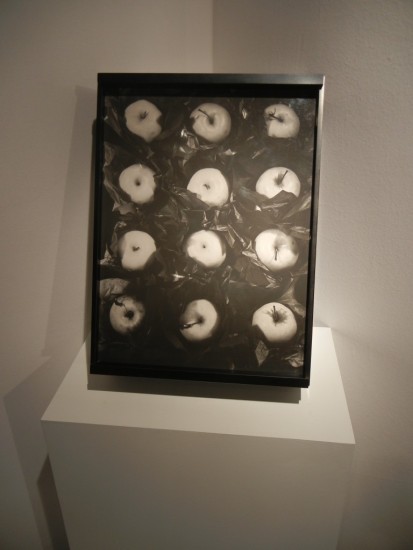 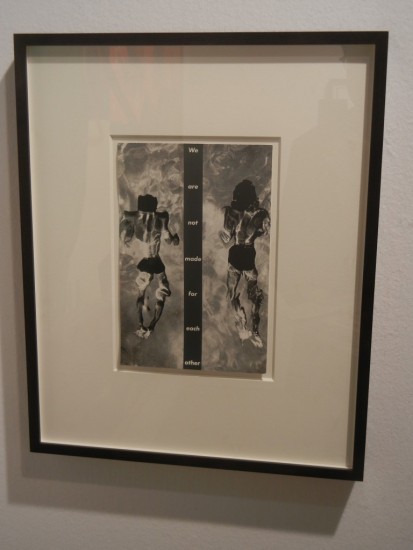 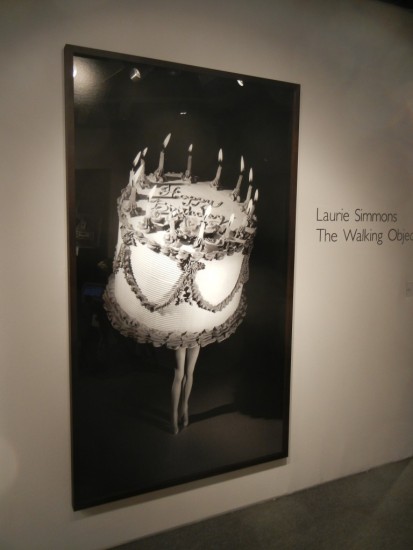 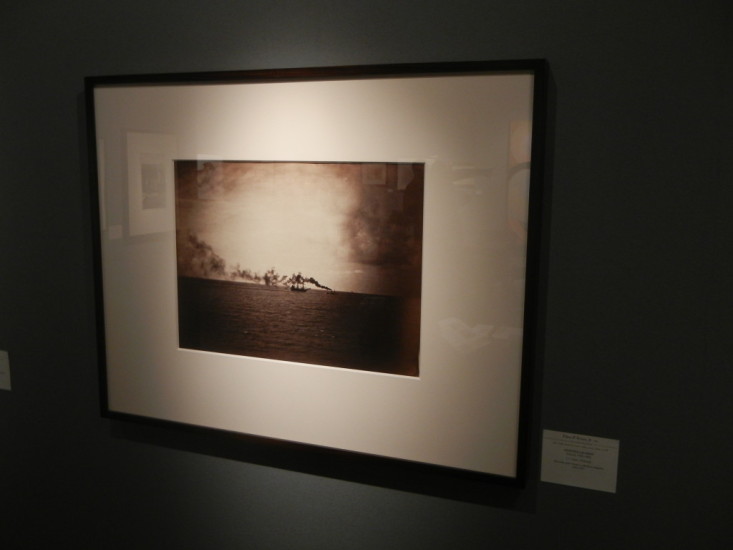 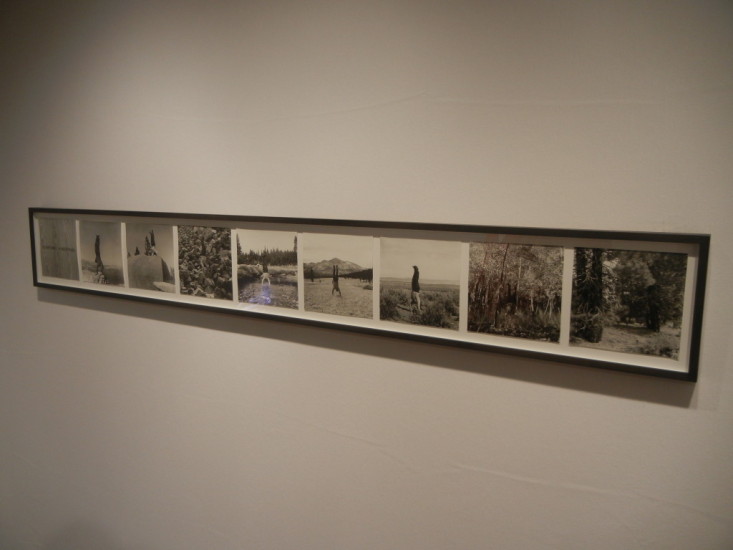 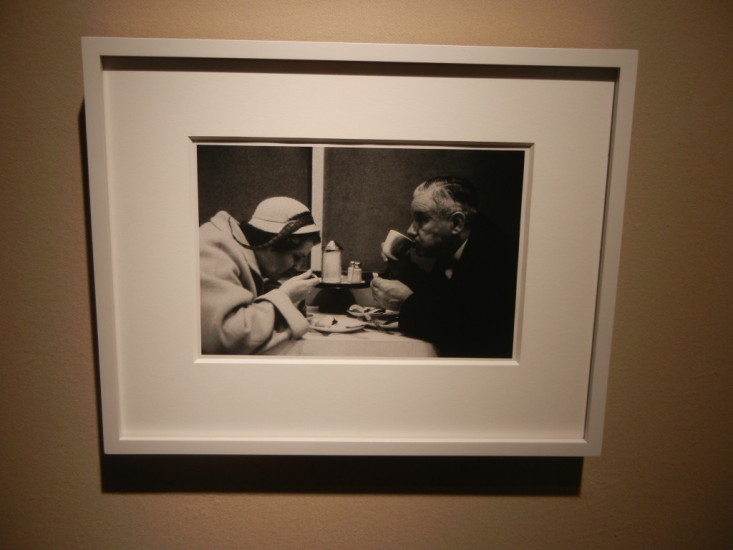 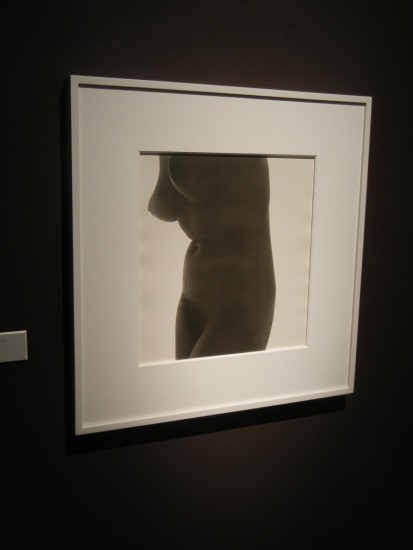 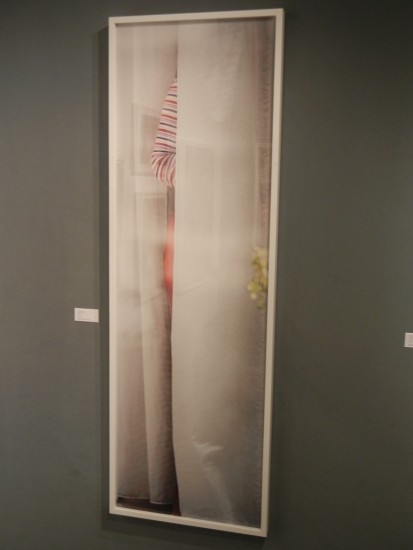 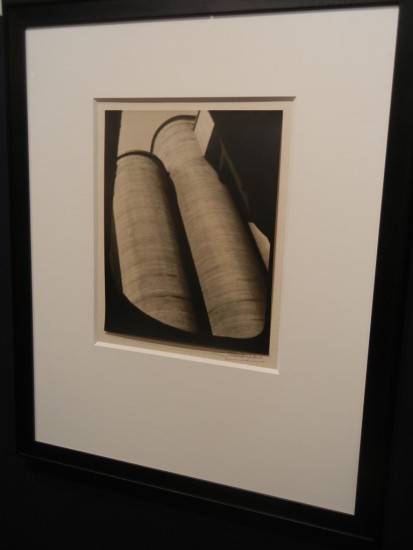 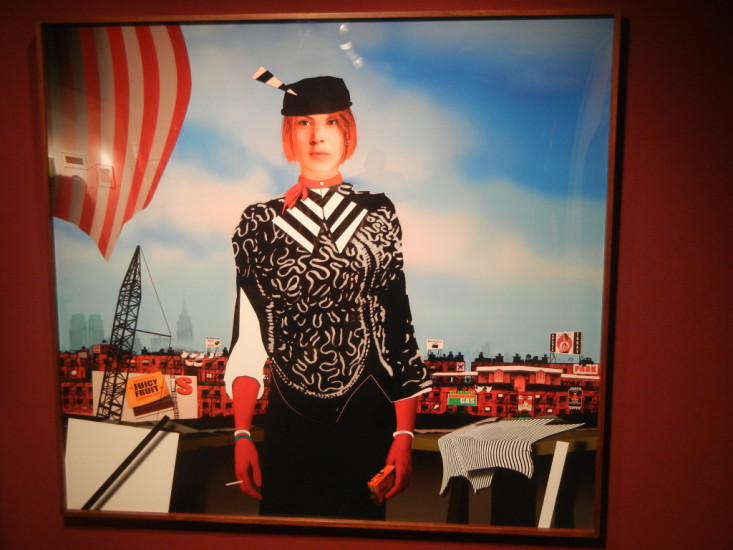 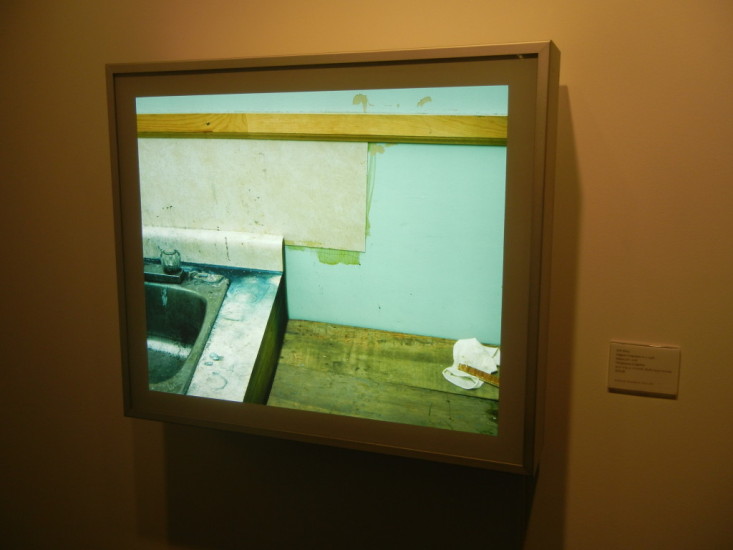 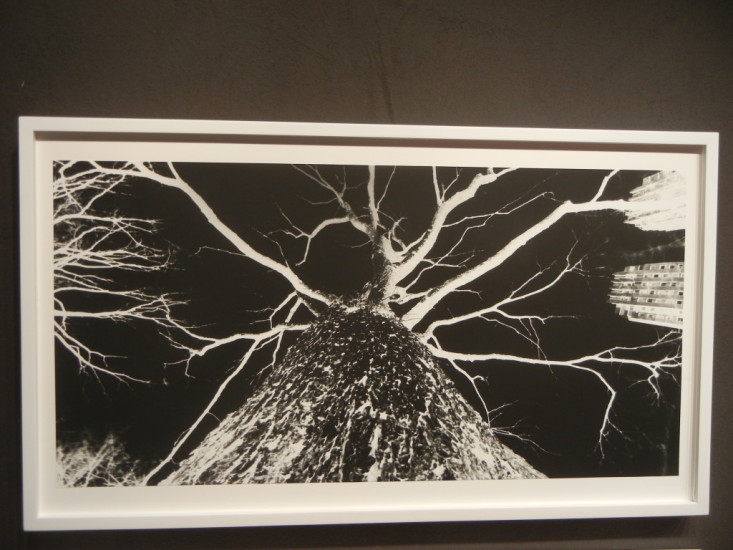 Metro Pictures (here): This booth contained a solo show of the recent work of Sara VanDerBeek, including a floor to ceiling sculpture bisecting the space and 5 photographs echoing its zig zag form in concrete blocks, steps, a hanging chain, and other found structures. This photograph was priced at $8000.

Laurence Miller Gallery (here): The work of Toshio Shibata received solo attention in this booth (12 prints), mixing his black and white and color work of dams, bridges, and other man-made structures embedded in nature. This chaotic clash of angles was the most powerful of the compositions, priced at $12000 in the largest size.

McKee Gallery (here): This single Richard Learoyd portrait was mixed into a broader selection of artworks in this booth. While the lens on the table adds some visual interest, the richness in the detail of Tatiana’s hair and the intricacy of her woven top are what make the portrait work. The print was priced at $75000 – and just think, these Learoyd portraits were $35000 just three years ago at this very same fair.

Yancey Richardson Gallery (here): This booth was filled with images from Zanele Muholi’s ongoing Faces and Phases series (15 single images and 1 color triptych); the best of her intimate black and white portraits of black lesbians and transgendered people are starkly entrancing. This one was priced at $5500.

Kraushaar Galleries (here): Buried amid the drawings and paintings in this booth was a single Wilson Bentley photomicrograph snowflake, its intricate details worth discovering. Priced at $5000.

PPOW Gallery (here): This booth was dedicated to the 1970s work of Martha Wilson and what a powerhouse statement it is (17 works, 1 video, and a vitrine with a handful of smaller works and ephemera). Nearly every photograph is accompanied by a printed text that details Wilson’s various thoughts, concerns, and approaches, and a slow turn through the space is rewarded by an abundance of smart gender investigation. This piece plays with the inversion of a 25 year old dressing like a 50 year old trying to look like a 25 year old, and opens up hard questions about aging and female self image. The gallery was trying to sell the entire booth of work as one unit to a museum, but apparently this work was also available in a slightly larger size for $15000.

Carl Solway Gallery (here): This booth was a busy in progress assembly line of photo portraiture, with Ann Hamilton in control. The unexpected part of this set up was the plastic polyurethane membrane that hung down in front of the sitter like a shower curtain, creating a misty transparent aura around a small area of shallow depth of field. The effect was like an emergence from a mysterious milky blur, and when it worked just right, it had a kind of magical elegance. Joining the fun was free (as was a small print from the series to be mailed later), while large print commissions were going for $10000.

Leslie Tonkonow (here): An early (1965, Fluxus) example of the photography as part of sculpture trend – a unique work by Robert Watts, priced at $50000. This booth also included prints by Laurel Nakadate (2 prints) and Allan McCollum/Laurie Simmons (4 prints in a grid).

Skarstedt Gallery (here): This booth mixed a variety of artworks and styles, and included two photographs: a small Cindy Sherman film still and this Barbara Kruger, We Are Not Made For Each Other, priced at $90000.

Salon 94 (here): Aside from 3 Barbara Krugers tucked away in the back room, this booth was a solo show of Laurie Simmons’ Walking Objects. These works are extra large, modern pigment prints of images made in 1989. There were 8 prints on view, in a mix of black and white and color; this one (an AP) was priced at $150000, while others started at $80000.

Hans P. Kraus Jr. Fine Photographs (here): This booth was a deep solo show (23 vintage prints) of the work of Gustave Le Gray, combining early salt paper prints with mid career albumen prints. A series of images of French ships/naval exercises adorned the back wall, among them the dark silhouettes and smoke of this pair, priced at $200000.

Alexander and Bonin (here): This booth mixed the late 1960s conceptual photography and sculpture of Robert Kinmont, with typologies of favorite dirt roads, roadkill animals, and handstands in nature offering doses of wry humor. The set of 8 handstands was priced at $30000, in a modern edition from 2009.

Fraenkel Gallery (here): The Fraenkel booth was a selection of Diane Arbus’ images of couples from 1956 to 1971 (14 prints), complete with a printed catalog. The prints from the mid 1950s, before Arbus started using her signature square format, were the most unexpected. This early vintage print of a couple eating at a diner was priced at $75000.

Pace/MacGill Gallery (here): This booth was filled with Irving Penn’s nudes from 1949-1950 (12 prints), the fleshy Earthly Bodies series. Seen together, they really show off how radically experimental Penn was with this work – curvy female bodies are washed out and bleached white, subtly toned, and printed in silver and platinum, each one different from the next, even when drawn from the same negative. This darker silhouette was priced at $55000.

Julie Saul Gallery (here): This booth brought together work from three gallery artists: Nikolay Bakharev (8 prints), Sarah Anne Johnson (5 prints), and Arne Svenson (5 prints). This Svenson print is particularly elongated, highlighting the texture of the curtain and the stripes on the sleeve. Priced at $15200.

Howard Greenberg Gallery (here): This booth was a curated group show called “Architecturally Speaking”, bringing together city and industrial views from Charles Marville to the Bechers. While standout works by Steichen, Gohlke, Abbott, and Evans were there on the walls, this lovely John Vanderpant was worth finding (priced at $16000).

Janet Borden (here): This booth was a solo show of the work of Alfred Leslie, bringing together a large painting (of De Kooning), 5 recent digital works, and a video screen with further images and details. What’s exciting about Leslie’s newest digital prints is the way he mixes realistic painterly forms with flat computer generated ones, playing with the contrasts of depth, flatness, and nuanced color. Miss Wonderly (from the Maltese Falcon) is priced at $50000.

Marian Goodman Gallery (here): This booth brought together a selection of Jeff Wall’s smaller works (8 lightboxes in all), where spatial relationships are the main attraction. It’s a meditation on corners and edges, with the rain filled suitcase, dripping paint cans, and dusty windows providing the subject matter. Diagonal Composition was priced at $250000.

Weinstein Gallery (here): This booth intermingled Vera Lutter’s older works from the mid 1990s with recent images of similar subjects, providing a back and forth examination of her evolving approach cities and trees. A new Pepsi Cola sign image was attracting all the attention, but the new upward looking trees (this one priced at $14000) felt more of a new direction for her. Keep your eyes peeled for the image of the Brooklyn Bridge, where her shadow intrudes in from the top edge – it’s as close to a self portrait as we are likely to ever see from Lutter.