Absent a pandemic virus making the entire world fearful of the next nearby cough, having galleries, collectors, and curators from all over the world congregate in one crowded place to look at contemporary art perhaps seems like a brilliant idea.

But with a very different hygienic context and a tumbling stock market as a backdrop, my pre-fair expectations for the collective mood of this year’s Armory Show were low, to say the least. And yet, while the crowds seemed somewhat thinner and more muted during my swing through the aisles, and there wasn’t much (if any) hand shaking, the business of art still seemed to be getting done, regardless of the circumstances.

As usual, the photography to be found at this year’s Armory Show leans toward the very most contemporary of work, much of it made in the last year or two, with a few vintage rarities mixed in here and there (mostly on Pier 90). And while we can assume (without tallying) that there was roughly the same amount of photography on view this year as in prior years, if we peel out the works from recent shows here in New York, there were slightly less interest-sparking new (and old) photographic discoveries to be made than in fairs past; it’s hard to tell whether this is a result of the galleries being more actively conservative or my eyes just getting a bit jaded.

The slideshow below covers what caught my attention in the various booths on both piers, and as usual, the individual images are accompanied by linked gallery names, artist/photographer names, and prices where appropriate, along with further description and analysis. 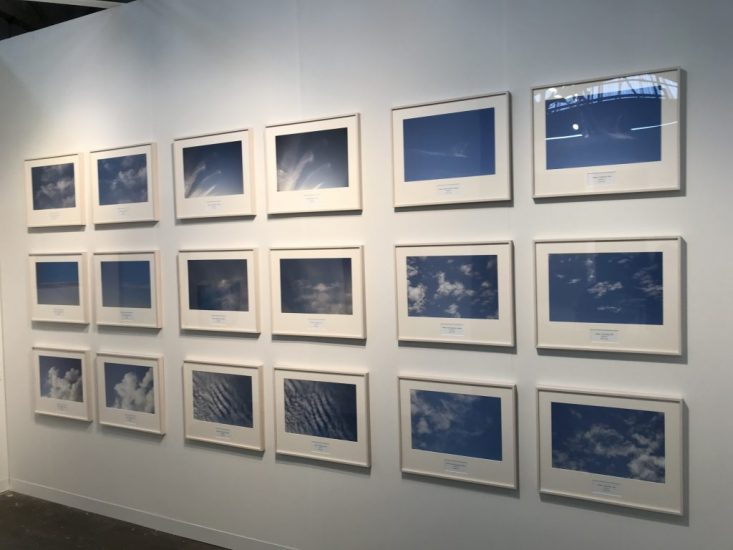 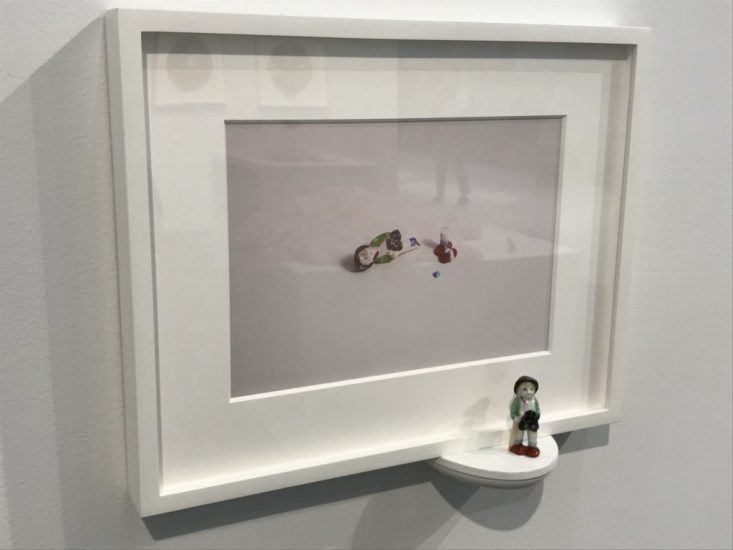 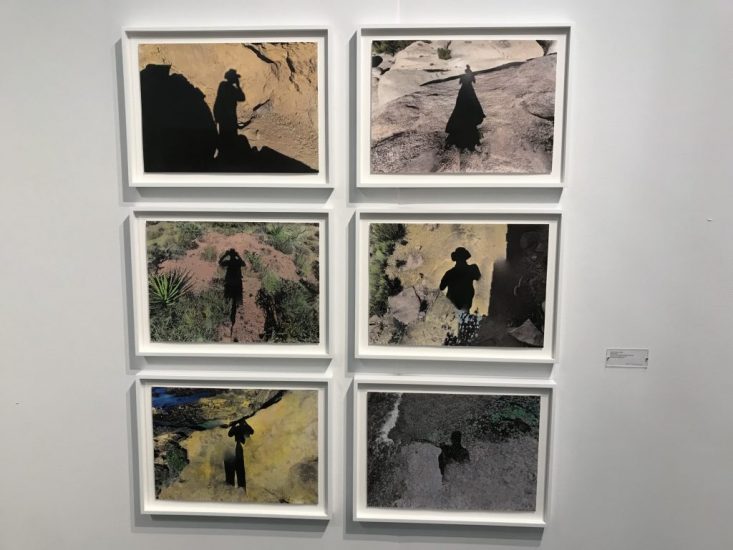 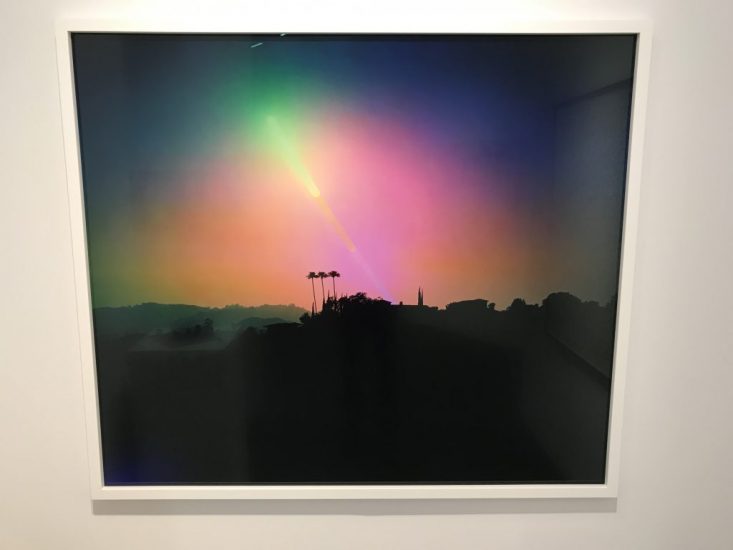 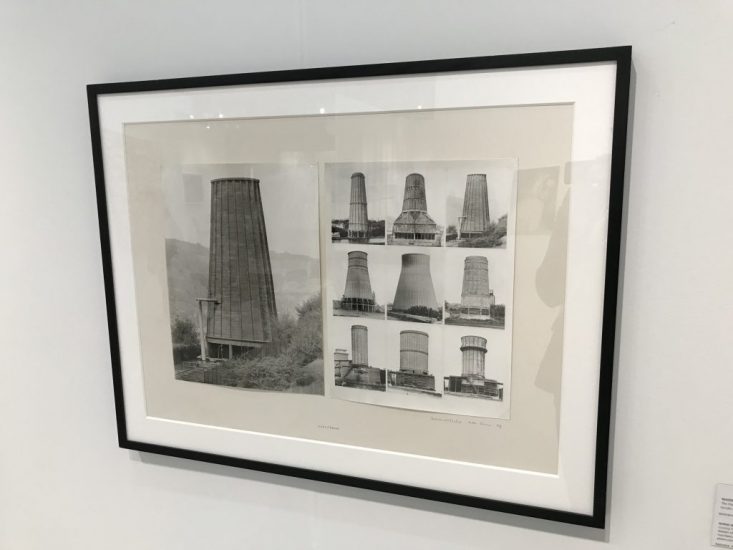 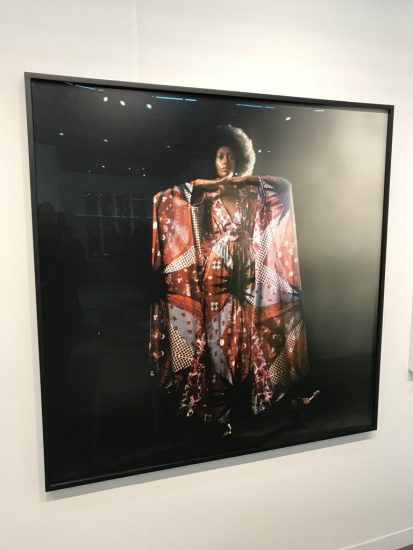 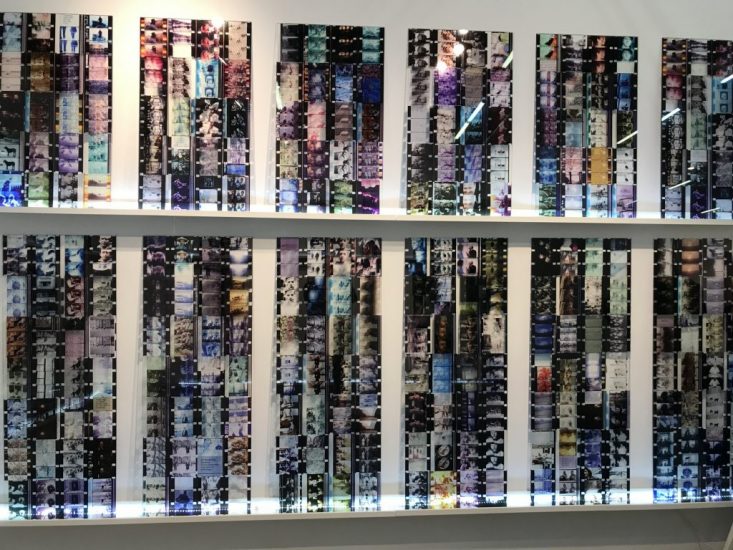 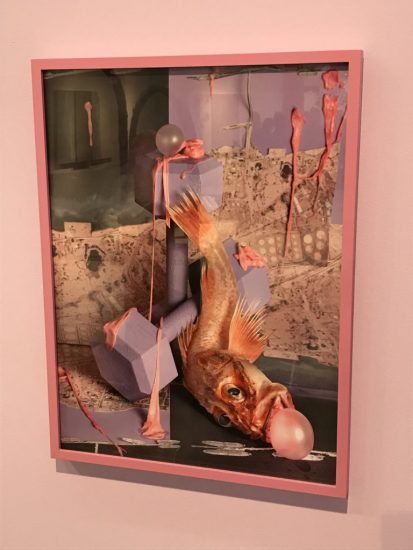 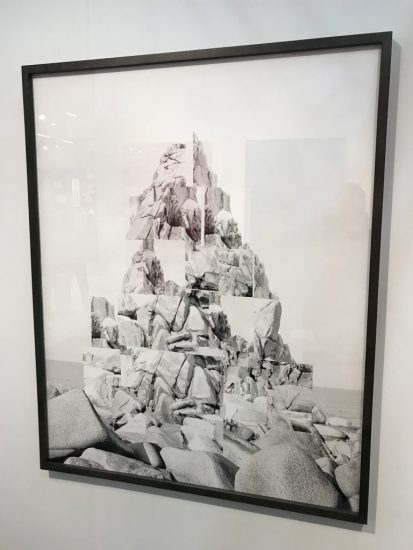 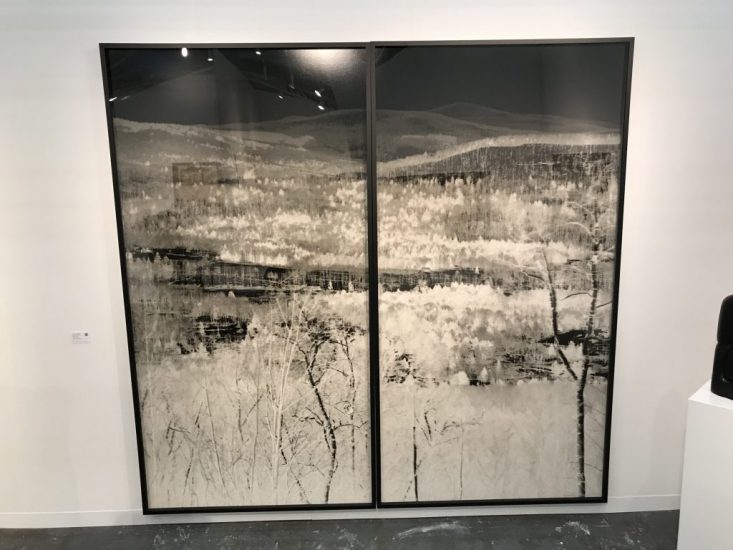 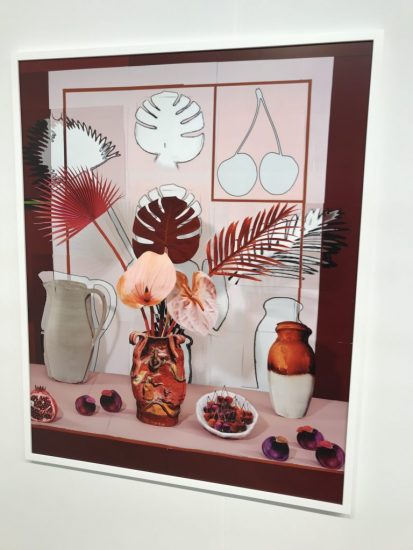 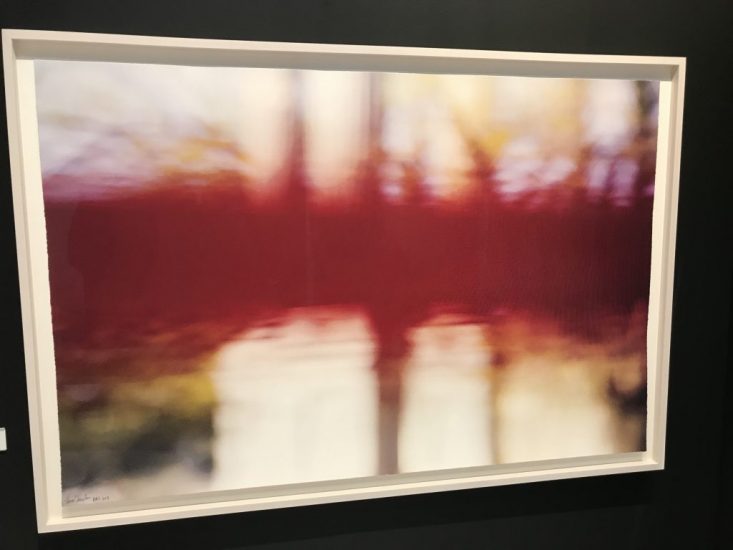 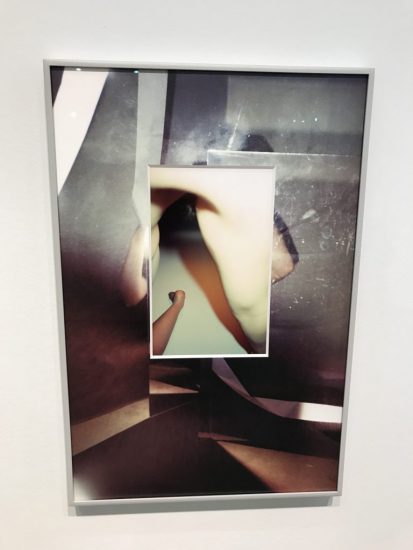 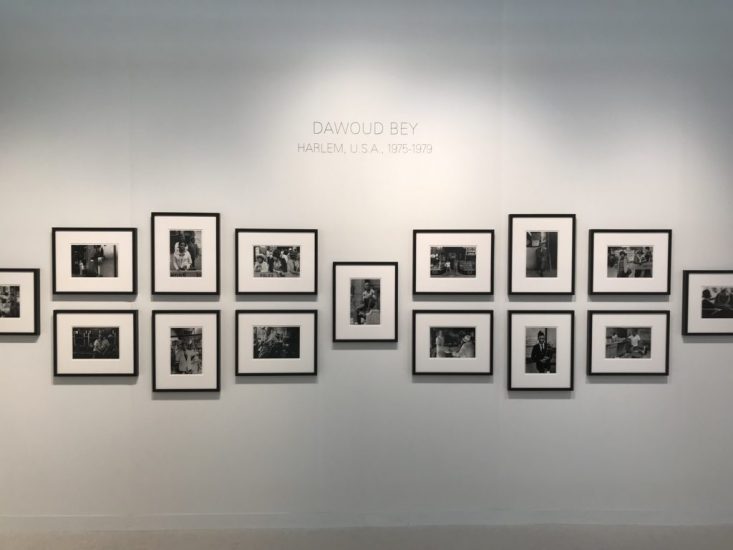 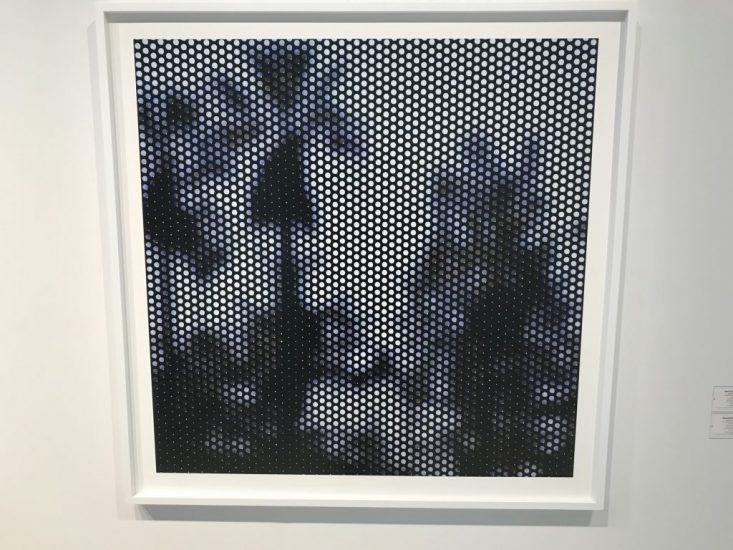 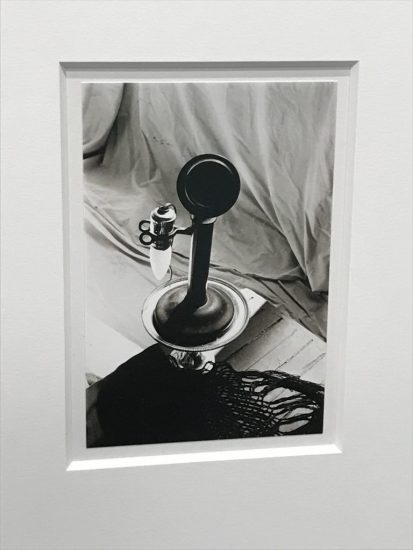 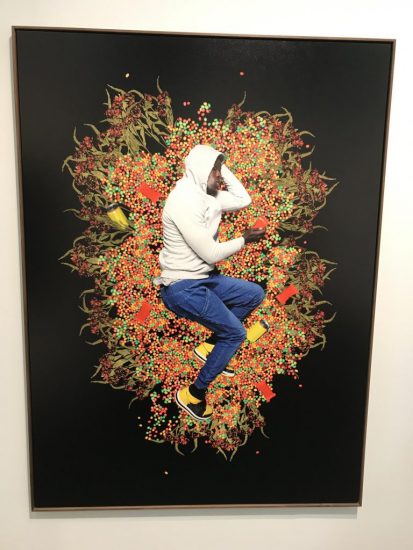 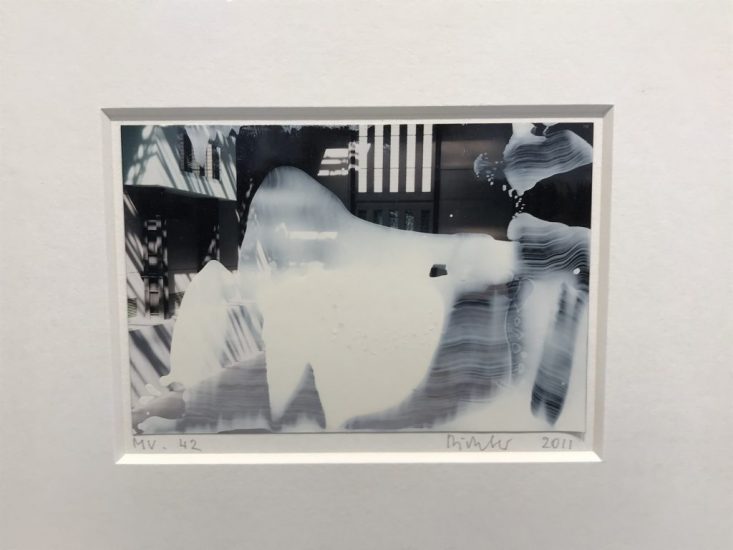 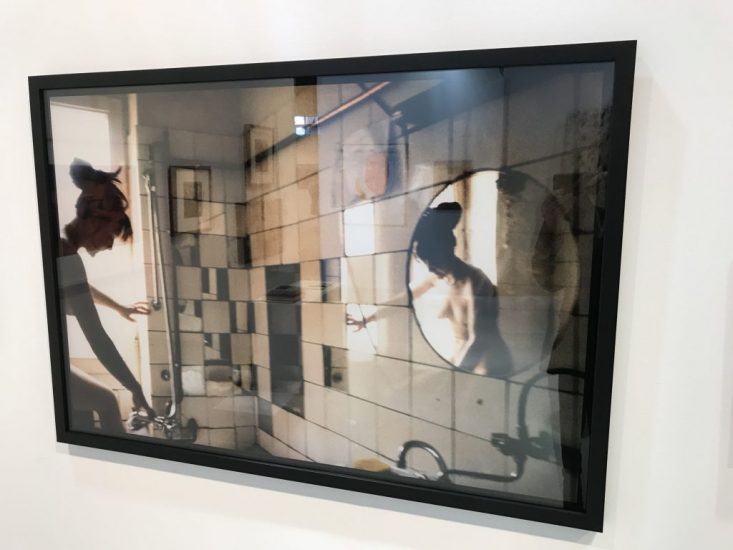 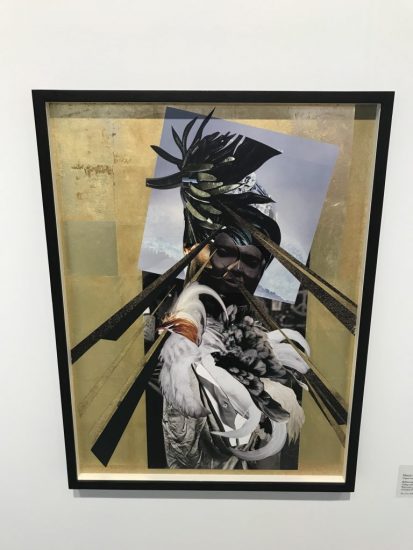 Proyectos Monclova (here): Chantal Peñalosa’s diptychs of cloud dappled blue skies are taken just a few minutes apart, so the cloud forms still look recognizably similar. The conceptual twist is that the photographs were taken on opposite sides of the US/Mexico border in Tecate, with the time in between exposures spent making the crossing. Of course, both sides of the border share the same sky, giving resonance to the artificiality of the separation and the artist’s repeated journey. Priced at $25000 for the set of 18 prints, with individual diptychs also available.

Sicardi Ayers Bacino (here): Liliana Porter’s image/object combinations confuse our understanding of the linearity of time. Her photograph shows the small statue broken, presumably at some point in the past, but it sits before us on a small pedestal physically refuting that conclusion. Elegantly smart inversions like this one give conceptual photography its durable punch. Priced at $14000 and already sold.

Bruce Silverstein Gallery (here): These works by Brea Souders stitch together desert landscape images taken by anonymous travelers and uploaded to Google Street View, the algorithms attempting to create unbroken 360 degree panoramas. The images don’t quite fit together neatly, creating overlaps, invisibilities, and perplexing conflicts, which Souders softens with hand painted watercolor washes. The cast shadows offer an elusive presence, that seems to break up and disappear. Priced at $5000 each.

303 Gallery (here): This new work by Florian Maier-Aichen continues his experimentation with multiple filtered exposures composited into one image. As the sun tracks across the sky in the early evening (like the work of Chris McCaw), its glare creates a softly colored haze. Priced at $45000.

Rhona Hoffman Gallery (here): While a wall filling typology by Bernd and Hilla Becher is what many collectors and museums want, small vintage diptychs like this one are even more representative of their fundamental ideas. The contrast of the larger single image with the grid of smaller pictures encourages both a deep inspection of details and a broad comparison of similarities and differences within the same artwork. Priced at $150000.

Philip Martin Gallery (here): Following on the heels of the publication of his excellent monograph (reviewed here), more prints from Kwame Brathwaite are making their way into the market. This dazzling fashion image is printed extra large (60×60 inches), giving it a confident presence. Priced at $45000.

Apalazzo Gallery (here): This booth was a colorful homage to the work of filmmaker Jonas Mekas, reprising a similar installation made for the Venice Biennale. Strips of three films stills from his various projects (and family home movies) are aligned together and printed on glass, creating a glittering stained glass effect. Priced at $8000 for the smaller and $12000 for the larger works.

Edel Assanti (here): While this exuberant still life takes its look from a commercial style, its content is anything but vapid. The Iranian photographer Sheida Soleimani has juxtaposed satellite images of Iran’s oil fields with byproducts of that industry (bubble gum, plastic hand weights) and choked an export (the golden fish) with the gum. The print itself is displayed against a painted wall evoking the ongoing Purple Revolution, bringing a distinct political edge to the eye-catching arrangement. Priced at $4000.

10 Chancery Lane Gallery (here): This massive camera obscura image taken in the Catskills by Shi Guorui dissolves into textures like a gestural ink painting. Taken over two days, the long exposure blurs the trees into delicately soft masses. Priced at $60000.

Yossi Milo Gallery (here): This new work by Daniel Gordon exchanges his recent blue palette for a red one. His tabletop constructions continue to explore the physicality of images, shadows, silhouettes, and the layering of visual echoes. Priced at $14000.

Two Palms (here): This booth had a selection of Nona Faustine’s screenprinted photographs of monuments and historical locations on view, their blurs and interruptions made more visible by the dots of the color separations. This image from Jackson, Mississippi, was particularly expressive, its history dissolving into a sea of red right before our eyes. Priced at $8500.

i8 Gallery (here): B. Ingrid Olson’s innovation of printing photographic imagery on the matte board and actively using it as a compositional tool remains durably intriguing. This work telescopes views up and down into a cleverly disorienting twist of flash-lit limbs. Priced at $8200.

Sean Kelly Gallery (here): This booth had a small separate section built out to house a solo presentation of Dawoud Bey’s Harlem work from the late 1970s. Shown in full for the first time since Bey’s show at the Studio Museum in Harlem in 1979, the work empathetically captures life in Harlem, from barbers, shoe shiners, and band members, to church goers and parade watchers. Individual modern prints priced starting at $6000, in rising editions.

Kayne Griffin Corcoran (here): Anthony Hernandez’ use of the perforated screen of Los Angeles bus shelters as a visual interruption of scenes of the city is an inspired aesthetic tool. Here it breaks a clichéd view of palm trees into a veiled pattern like Roy Lichtenstein’s Ben Day dots. Priced at $18000.

Marc Selwyn Fine Art (here): This 1975 image by Jay DeFeo adds a surreal touch to a simple still life. The old black telephone holds a lit bulb on its hook, the contrasts of light and dark and the mix of textures in the surrounding composition centering our attention on its strangeness. Priced at $18000.

Magnin-A (here): This recent work from the Senegalese photographer Omar Victor Diop comes from his Liberty series depicting various black resistance fighters through history. Made in pairs of images with similar poses, and generally using Diop as the protagonist, the series connects struggles all over diasporic world. This image pays homage to a hooded Trayvon Martin, surrounding him with colored candies and floral bouquets. Priced at $21500.

Galerie Ludorff (here): This overpainted Gerhard Richter photograph makes the most of the contrast between the squiggled paint and the underlying image, the soft ripples of white mimicking the patterns of shadows and windows underneath. Priced at $120000.

Caviar20 (here): This booth hosted an unlikely, but plausibly connected pairing of photographs by Nan Goldin and Weegee. This gracefully serene image uses of one of Goldin’s favorite motifs, the mirror as doubling effect. Priced at $22000.