This year’s Armory Show began with a bit of pre-fair scheduling drama. Last minute structural problems with Pier 92 forced the organizers to move the booths planned for that pier to nearby Pier 90. But this opportunistic reshuffle didn’t come without meaningful consequences, however. The move caused the domino effect of bumping all of the galleries who had signed up for the sister Volta fair out into the cold; these galleries were then partially rescued by the hustle and generosity of collector Peter Hort, David Zwirner Gallery, and others, who rustled up an alternate fair solution that became known as Plan B. For those who weren’t following all of this back and forth prior to the opening of the show, the net effect to the average Armory Show visitor was simply a longer (and chillier) walk between the two piers, and an additional ride to Chelsea to catch the plucky reincarnated (but hobbled) Volta.

As expected, the photography to be found at this year’s Armory Show leans toward the very most contemporary work, much of it made in the last few years, with a few vintage rarities and lesser known rediscoveries mixed in here and there. And while there was essentially the same amount of photography on view this year as in year’s past, I deliberately limited myself to selecting a total of 25 photography highlights this year. This tighter editing process resulted in leaving out some of the usual suspects and obvious sellers that consistently repopulate the aisles, leaving a bit more space to think about the range of recently produced and somewhat more obscure (but deserving) works.

The slideshow below covers what caught my eye in the various booths on both Pier 94 and Pier 90, and as usual, the individual images are accompanied by linked gallery names, artist/photographer names, and prices where appropriate, along with further description and analysis. 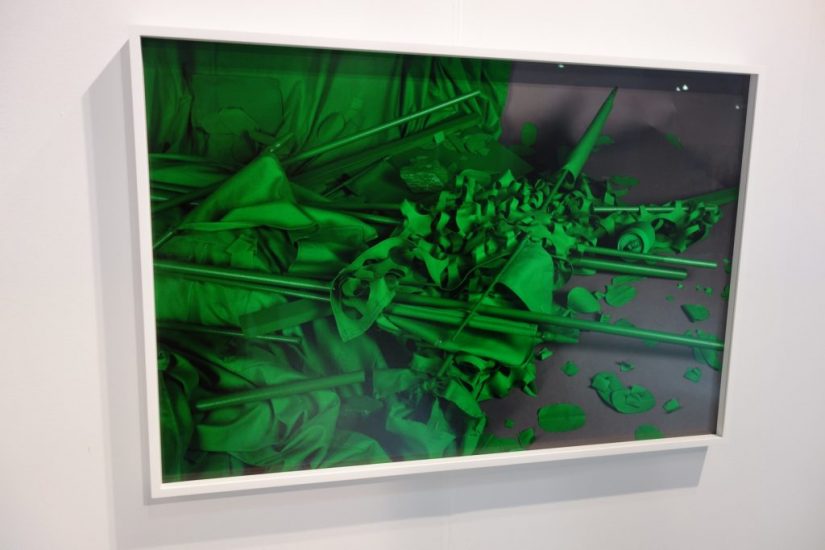 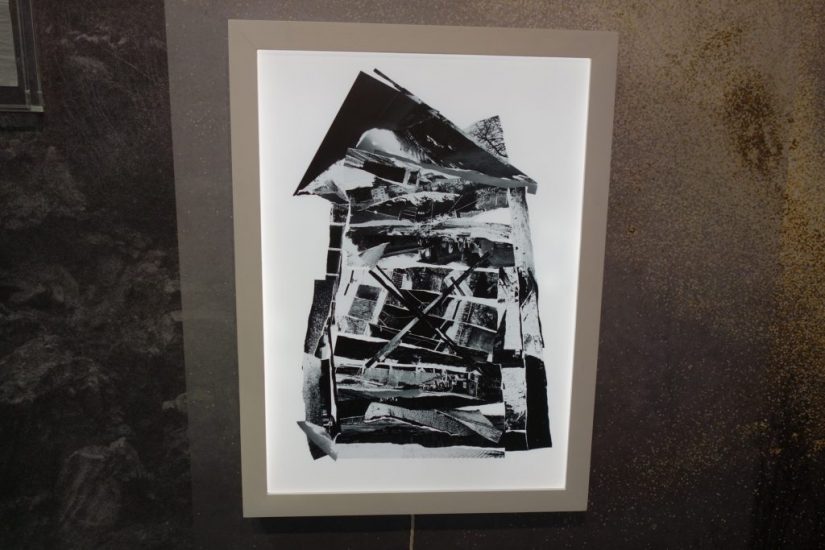 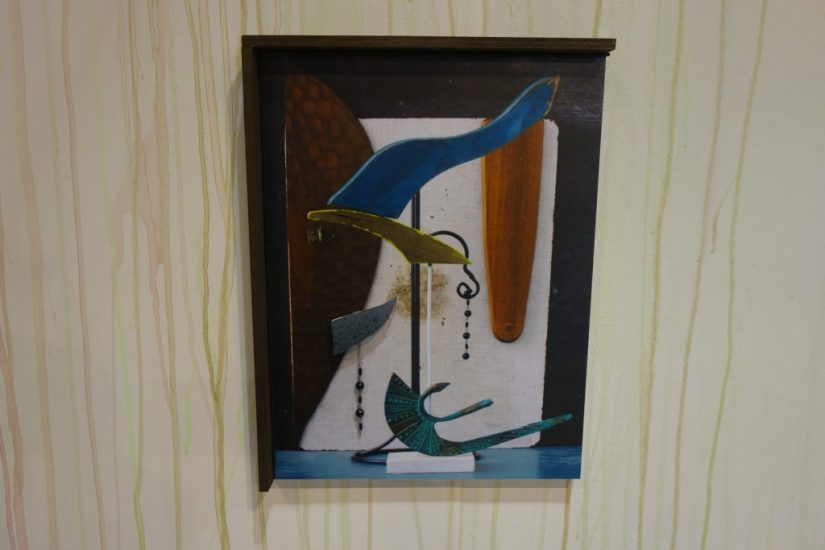 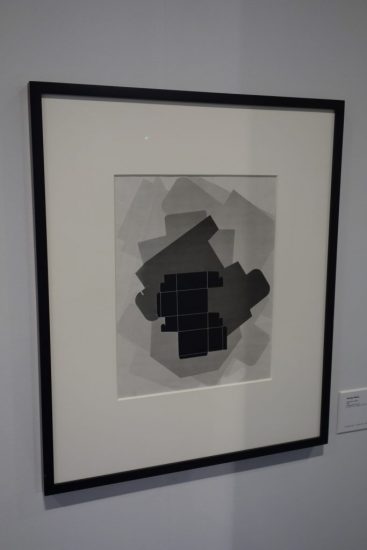 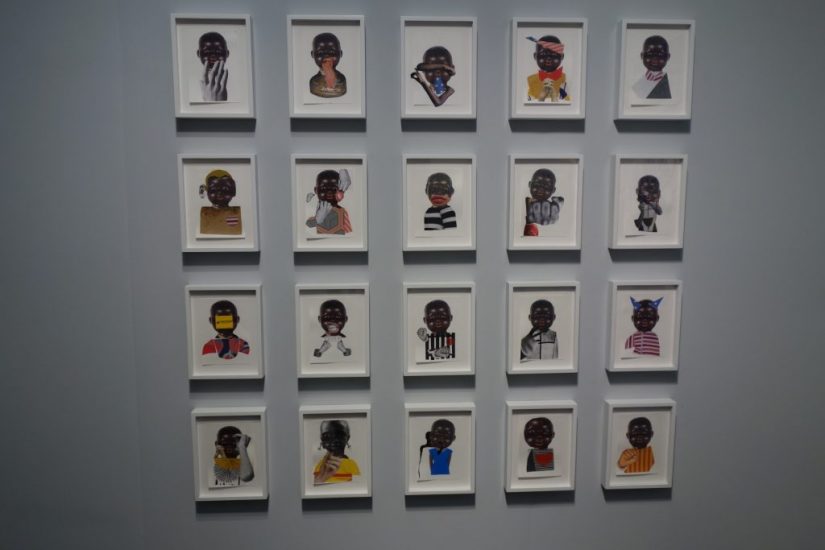 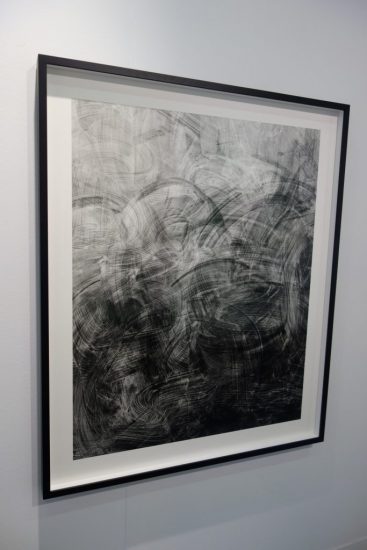 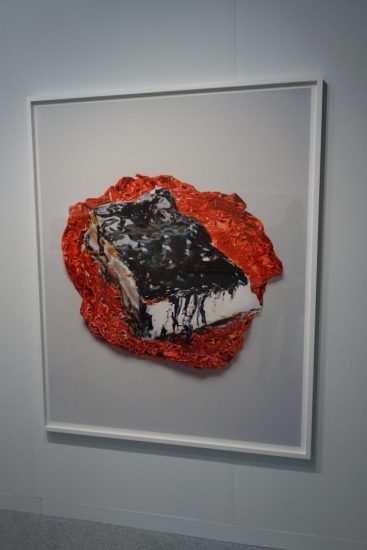 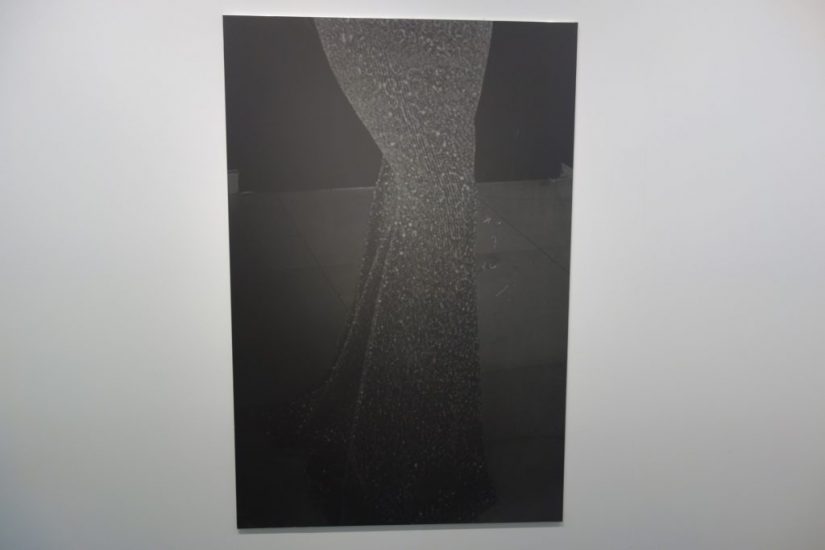 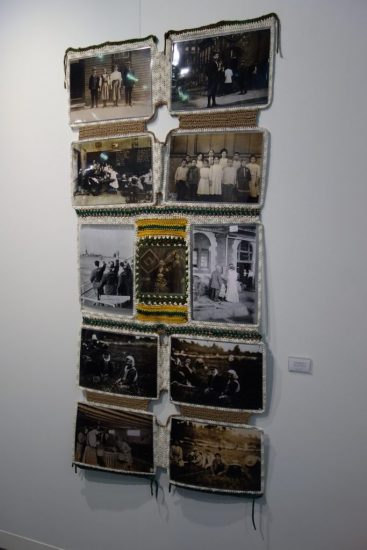 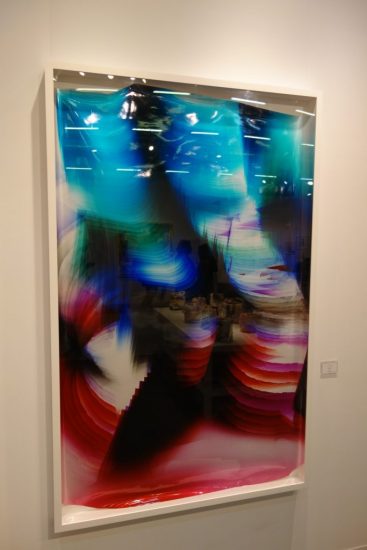 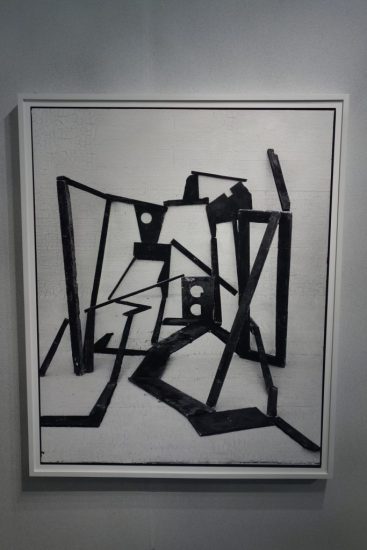 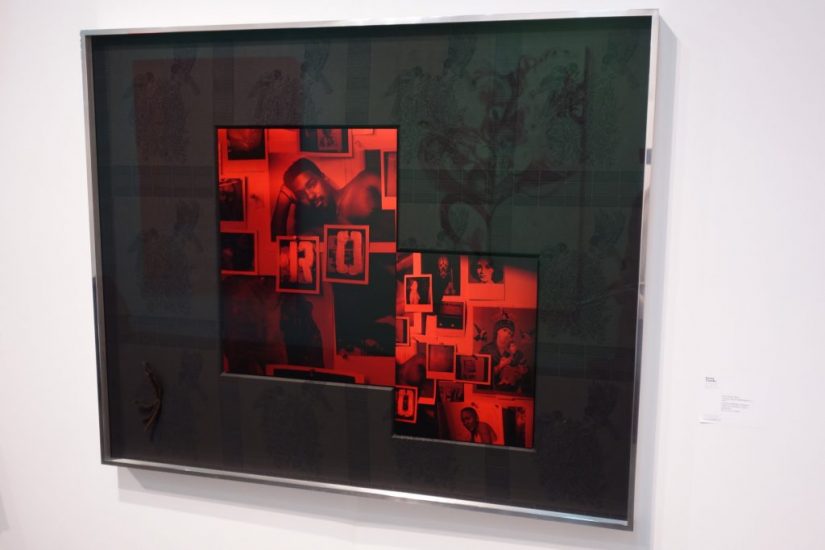 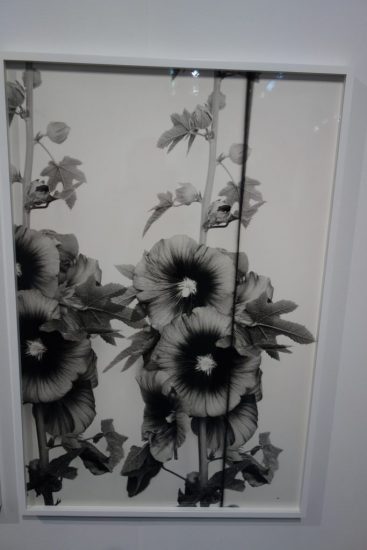 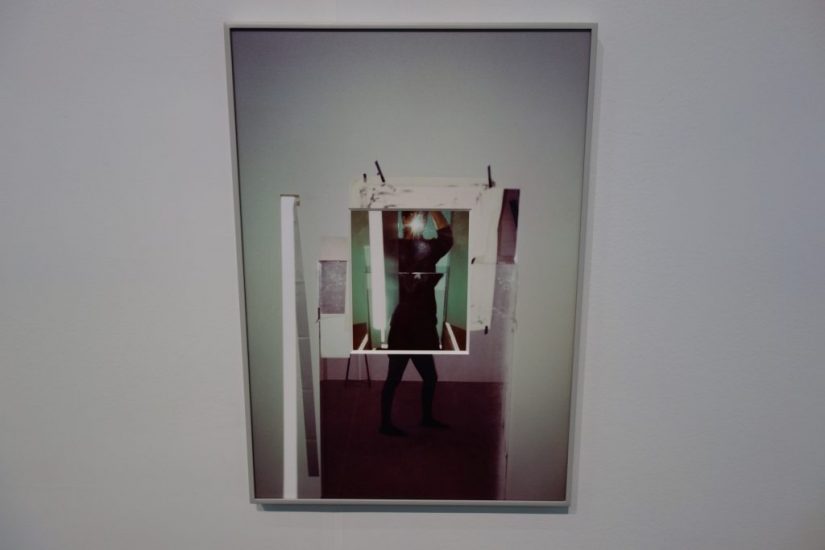 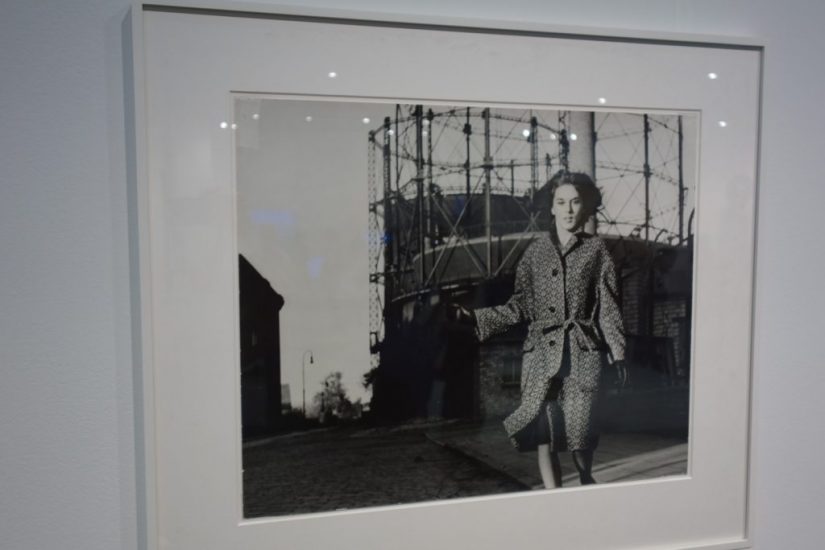 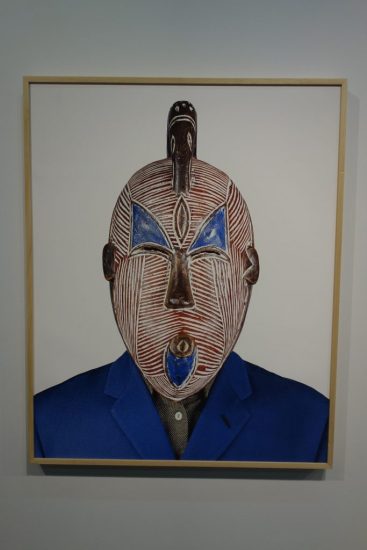 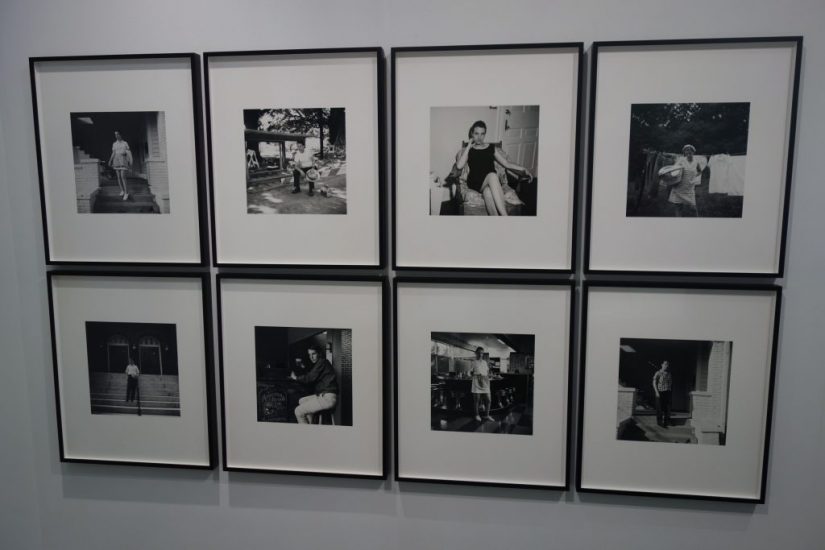 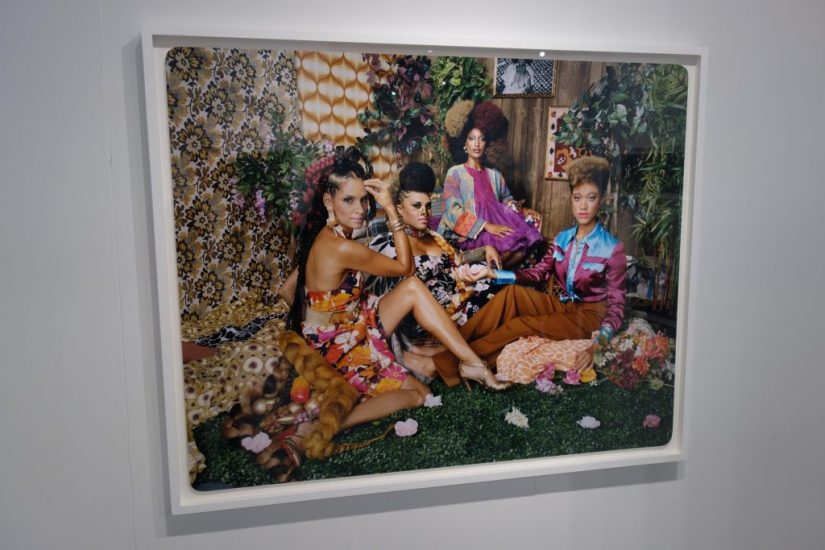 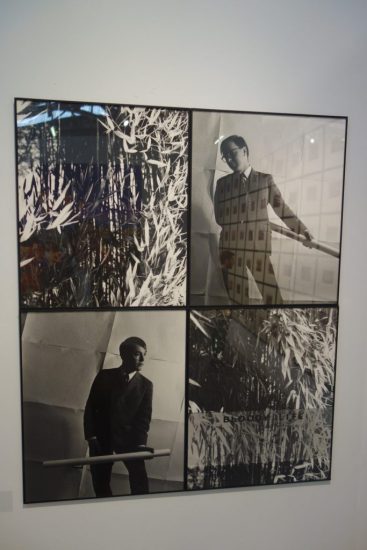 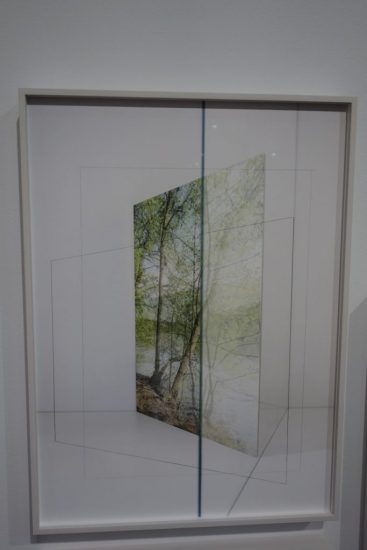 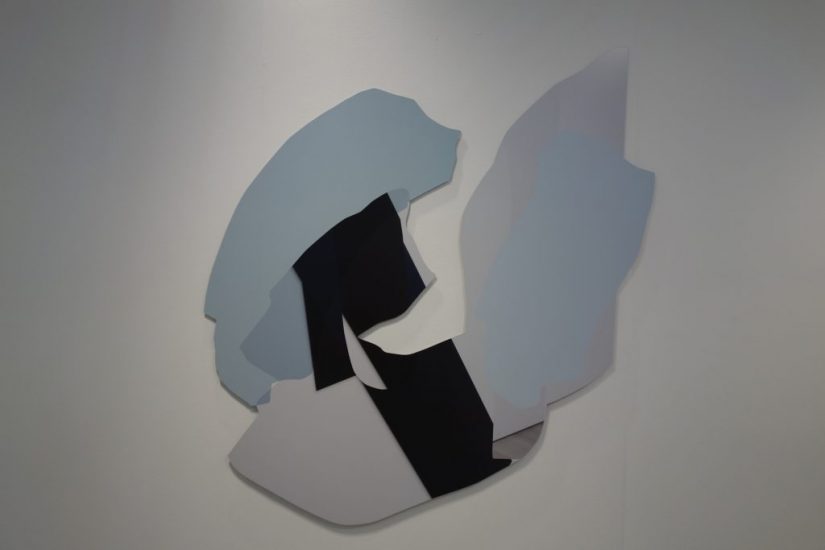 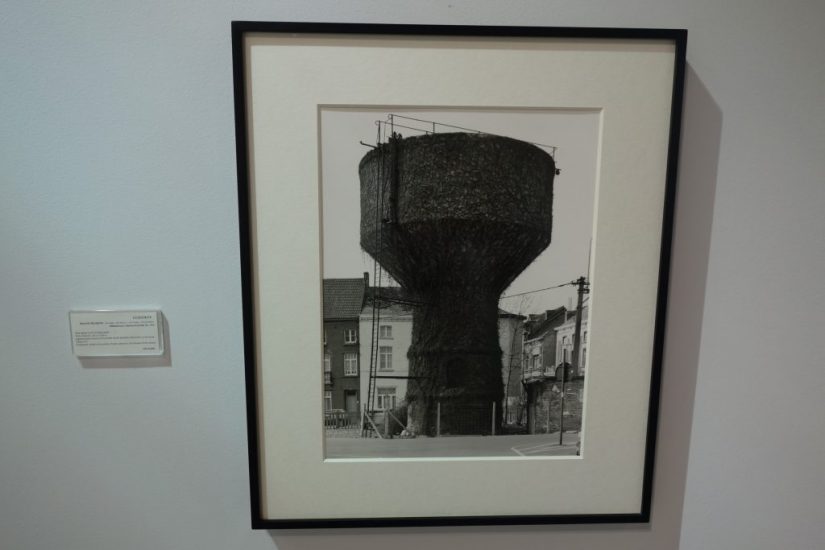 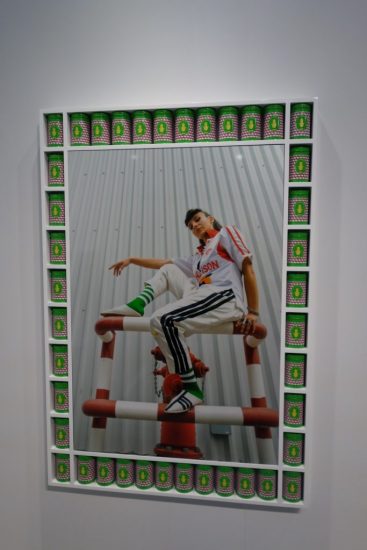 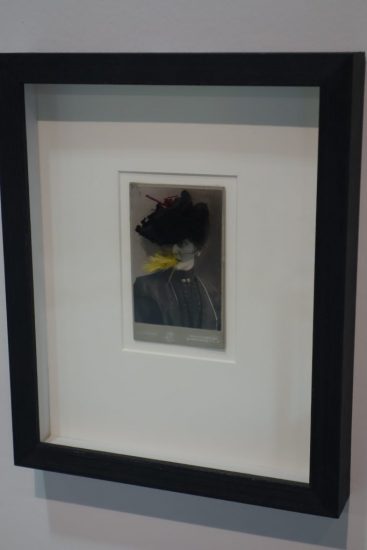 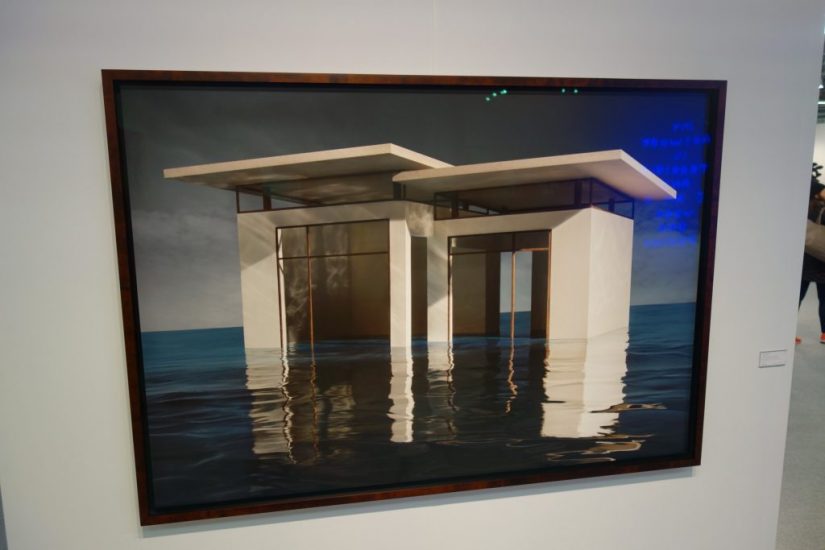 Ryan Lee Gallery (here): This image by Stephanie Syjuco plays on the process of chroma keying, where a green screen is used for background compositing. Syjuco has recreated a jumbled pile of flags, barriers, and other protest detritus in bright green fabric, the entire scene executed in the same hue. Conceptually, any number of causes or injustices can be projected onto this recrafted setup, tapping in to a sense of the universal structure of opposition. Priced at $8500.

Montrasio Arte (here): This lightbox work by Gian Luca Bianco responds to the aftermath of the recent earthquake in Macerata, Italy. Shadowy images of fallen homes, rubble, and fragmented destruction have been collaged into the loose form of a house, the layering of the torn prints becoming a physical reconstruction process. Priced at $3000.

Pablo’s Birthday (here): This still life image from Thorsten Brinkmann is an amalgamation of found objects, smartly arranged into overlapped physical geometries. The work jumps into three dimensions with several objects affixed to the surface of the photograph (including the hanging chain on the left, which echoes a similar chain to the right in the photograph) and a two-sided wooden frame, creating confusing interplays of aesthetic space. Priced at $5000.

Robert Koch Gallery (here): Unfolded paper boxes provide the raw material for this dizzying 1939 multiple exposure work by György Kepes. The pile gradually moves from light to dark and from large to small, each form rotated and reordered. It’s a fascinating example of the place where photography meets design. Priced at $18000.

Stephen Friedman Gallery (here): A black baby doll provides the starting point for this unsettling series of collages by Deborah Roberts. The central image is alternately interrupted and decorated by facial features, fists, and scraps of patterned imagery, turning the blank smile into a range of possible reimaginings. Priced at $70000 for the set, and already sold.

Galerie Thomas Schulte (here): This new work by Idris Khan uses his signature collapsing of images process to sandwich nearly a dozen photographs of store windows into one shifting mass. Gestural sweeps cover the surface, blending into overlapped layers and thick aggregations of expressive brushwork, giving it a sense of constant motion. Priced at $59000.

Yancey Richardson (here): Sharon Core’s painstaking photographic recreations of Wayne Thiebaud’s luscious paintings of cakes helped jump start her artistic career, bending the process of representation back in on itself. In this new work, she has returned to this kind of thinking, remaking the soft sculptures of Claes Oldenburg. This melting ice cream sandwich sits atop a shiny rumped surface, the textural transformations of real to cloth and back again expertly managed. Priced at $18000.

Zeno X Gallery (here): Dirk Braeckman has often explored the lushly undefined areas of photographic shadow and darkness. This new work draws textural elements out of that uncertainty, the sparkle of the dress set off by unexpected surface scratches. Priced at $35000.

Kalfayan Galleries (here): Found images from Ellis Island (many of orphans and children) form the basis of this recent work by Silvina Der-Meguerditchian. The prints have been laminated in clear plastic sheets and then woven into a carpet-like structure, alluding to the Argentinian artist’s Armenian heritage. In this way, the stories in the photographs become part of an older form of shared history. Priced at $7500.

Van Doren Waxter (here): If this new image by Mariah Robertson is any guide, her work is getting even more dense and thickly layered. Literally hundreds of darkroom exposures have been built into this shimmering photogram, creating a shifting, jittering flow of metallic color. A tiny strand of what appears to be fishing line or hair adds another almost imperceptible element of iterative twisting. Priced at $20000.

Upfor Gallery (here): The bold brush strokes of Franz Kline provide the inspiration for this recent work by Rodrigo Valenzuela. Carefully mixing studio construction and rephotography, the tangle of lines and geometries redefines a confounding space where image and object seamlessly interact. Priced at $7500.

David Castillo Gallery (here): This mixed-media piece by Lyle Ashton Harris was one of the strongest at the fair. Harris’ signature inspiration wall collages form the central axis of the work, the red tinted dye sublimation plates seeming to glow and shine in the darkness. Patterned funeral cloth from Ghana (featuring a hummingbird motif) and a few strands of the artist’s own dreadlocked hair rebalance the engrossing mood of mortality. Priced at $75000.

Tanya Bonakdar Gallery (here): Stereographic images from the early 1900s form the basis for this new work by Lisa Oppenheim. The artist has taken the two original images and relayered them next to one another, creating a surreal echoing and overlapped effect. Priced at $20000.

i8 Gallery (here): This recent work reprises one of B. Ingrid Olson’s most inspired artistic innovations – printing imagery directly on the mat board. The telescoping effect puts the two images inside one another, generating unexpected frictions of time and space. Priced at $5800.

Galerie Loock (here): This booth contained a large installation of photographs and magazine spreads by photographers working in the former GDR (from roughly the late 1960s to the early 1980s). This oversized image by Arno Fischer combines the loose style of a fashion shoot with the grittiness of industrial architecture, the two sets of patterns wrestling for dominance. Being sold as part of the larger group/installation.

Jessica Silverman Gallery (here): This late 1990s series by Tammy Rae Carland started with a 1960s image of the artist’s parents. That picture kicked off an artistic process of reinhabiting their lives, with Carland playing both parts. The images are smartly gendered (ranging from construction worker to diner waitress) and quietly unsettled, the stereotypes and roles of the time unpacked and reconsidered. Priced at $42000 for the set of 8 prints.

Yancey Richardson (here): This new work from Mickalene Thomas continues to explore many of the artist’s familiar motifs – powerful black women posed in funky interiors filled with clashing patterns and cultural allusions. Here, Thomas seems to turn up the volume one more notch, adding in even bigger multi-colored hair and letting the composition get even more dense with textures, all within a structural reference to Manet. Priced at $40000.

Blain|Southern (here): In 1975, when this work was made, Gilbert and George had just begun to experiment with photography. But this simple grid of bamboo stalks and portraits with paper tubes has the obvious aesthetic seeds of what would keep them busy for the next forty years. Its visual echoes and reversals are understatedly clever, and it was a treat to see such an early piece outside of a museum. Priced at £500000.

Wentrup Gallery (here): Miriam Böhm’s works are always intricately plotted studies of spatial complexity, and this new work is no exception. The wooded image is interrupted by pencil drawn lines and the edge of a glass plate, the layers of rephotography creating a perplexing set of planes. Priced at $4500.

Perrotin (here): Artie Vierkant has been exploring the edges and limits of his Image Object series for years now, and this new work continues that process. While his earlier works in the series stuck to rigid geometries, these new efforts are much more gestural and painterly, some of the forms clearly resembling brushstrokes. Here, the scooping digital movement reveals an underlayer of Vierkant’s own hard-edged work (with a fragment of gallery flooring), upending our sense of what the work “documents”. Priced at $18000.

Galerie Ludorff (here): While the water towers of Bernd and Hilla Becher are an art fair staple, this is the first image I have ever seen where the water tower was covered by plant growth. It’s almost as if the form of the tower has been softened by the fuzzy netting of ivy. Priced at $23000.

Yossi Milo Gallery (here): This work by Hassan Hajjaj is filled with contagious swagger. Combining the repeated motif of the green tea cans embedded in the frame with the striping on and behind the posed woman, the work is both a confident portrait and a exuberant exercise in surface pattern. Priced at $17000.

Laurence Miller Gallery (here): This collage work by Gary Brotmeyer introduces a jaunty velvet hat and the feathers of a yellow canary into a found portrait (the bird has apparently been eaten), adding physicality and humor to its old-style formality. Priced at $6000.

Sean Kelly Gallery (here): James Casebere’s new works seem to synthesize several strands of his artistic thinking, combining a recent interest in planar architectural forms (executed in color) and a return to the visual pleasures of flooding from his earlier days. The mood is altogether lighter than in his flooded interiors, the cast light feeling surprisingly warm on the stuccoed surfaces. Priced at $50000. (Apologies for the reflection of the neon piece from across the way.)