In its first iteration after the interruptions caused by the pandemic, the 2021 Frieze New York art fair reinvented itself for its particular moment, slimming down to a much tighter grouping of more local galleries and switching venues to the sleekly modern (and more convenient and airy) spaces of the Shed in Hudson Yards. At the time, the transformations introduced by the fair felt provisional, like a trial balloon floated into the otherwise turbulent air.

Another year of pandemic-induced uncertainty has now passed, and the return of the 2022 version of Frieze New York finds that many of those seemingly temporary decisions of a year ago have been more fully cemented into place. The venue is the same, the narrowed exhibitor list is similar, and the mood of cautious openness has been replicated, leading to a fair that felt vaguely muted rather than particularly energetic or provocative, even with many of the world’s top galleries in attendance.

As is the case with all of our art fair reports, the slideshow below gathers together a selection of notable photographs found at the fair, starting with the booths on the 2nd floor of the Shed, and moving upwards through the 4th and 6th floors. Each image is supported by linked gallery names, artist names, prices (as available), and a short discussion or commentary. 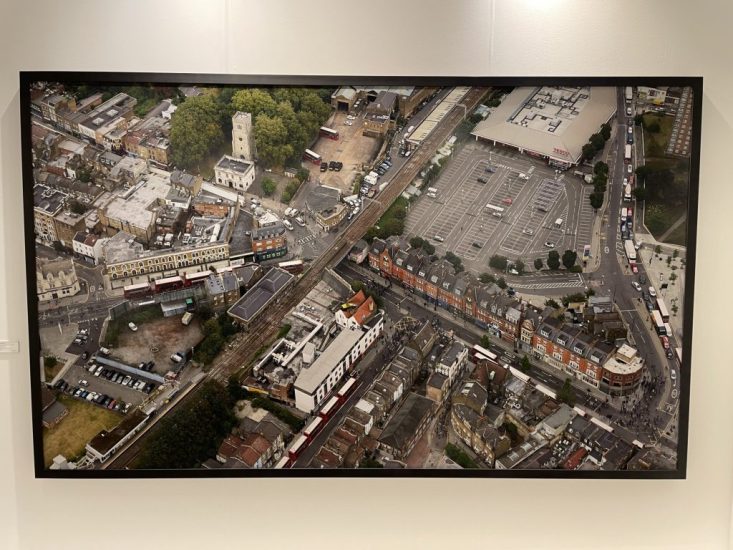 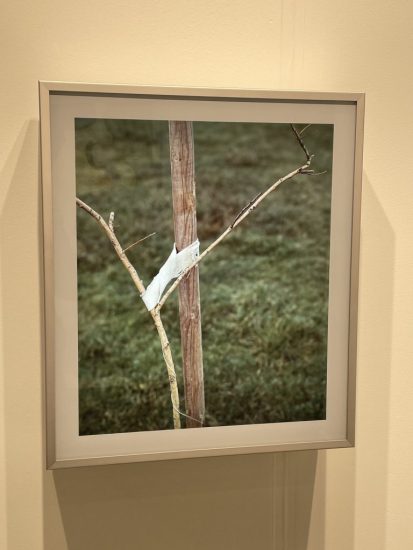 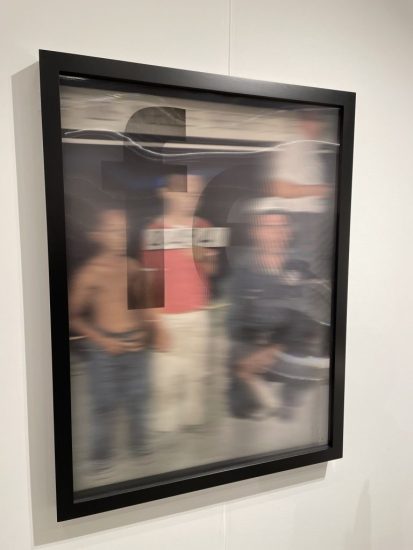 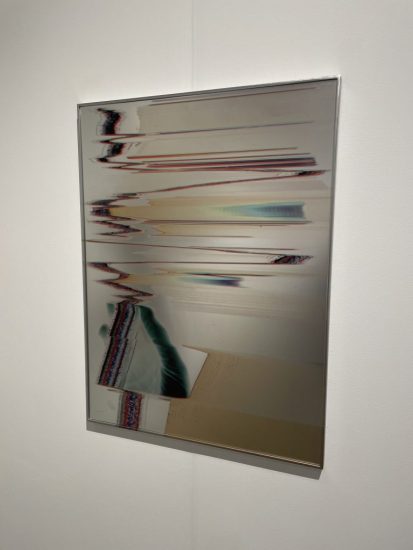 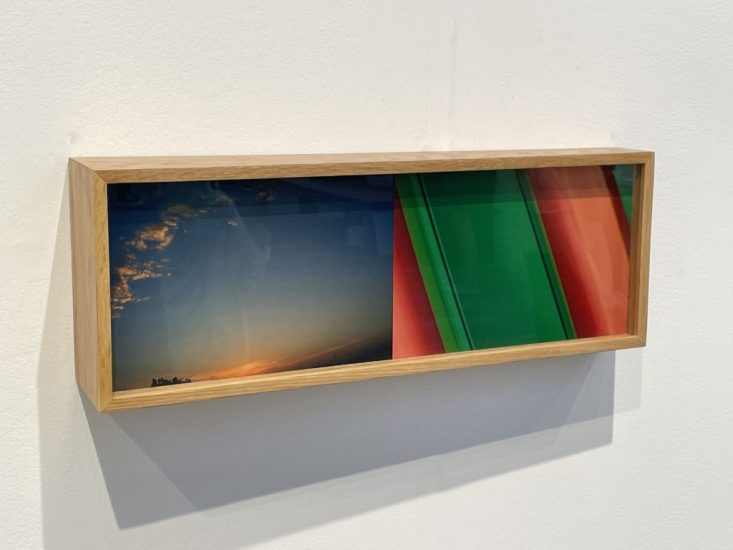 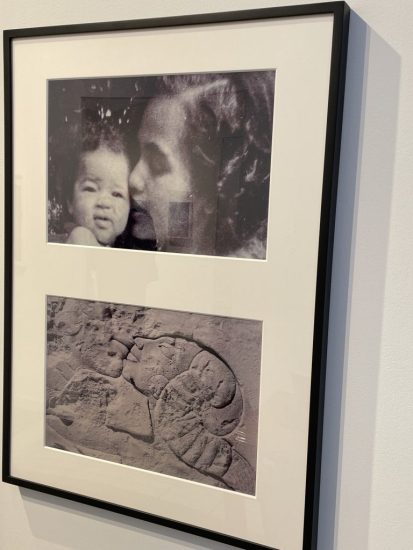 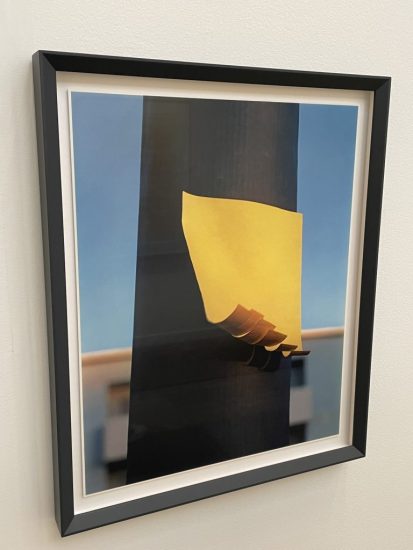 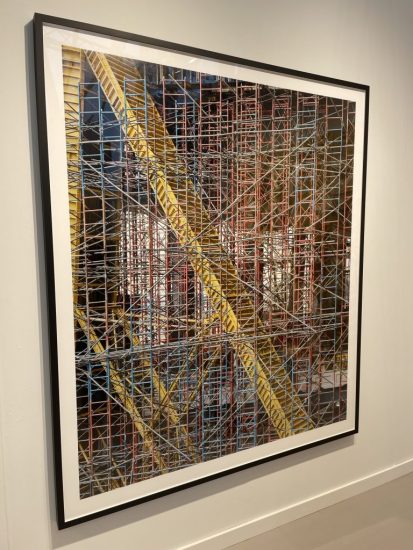 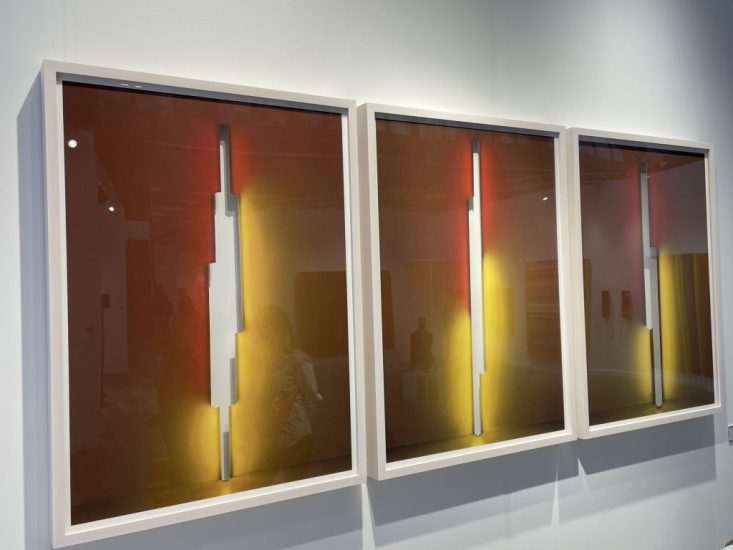 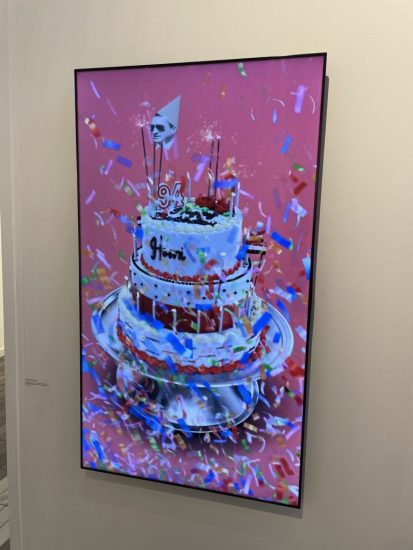 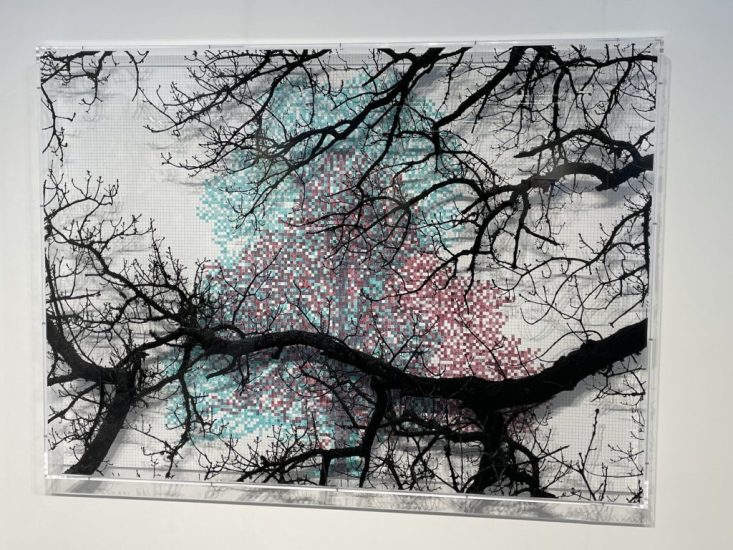 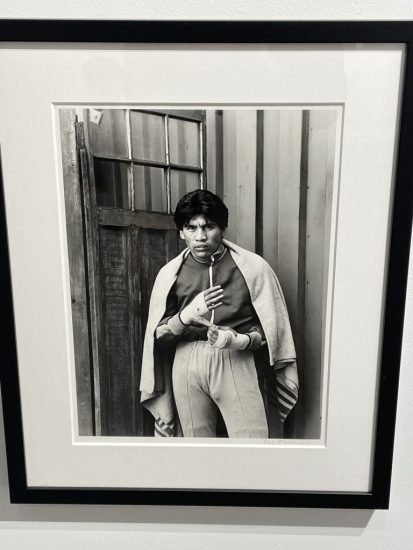 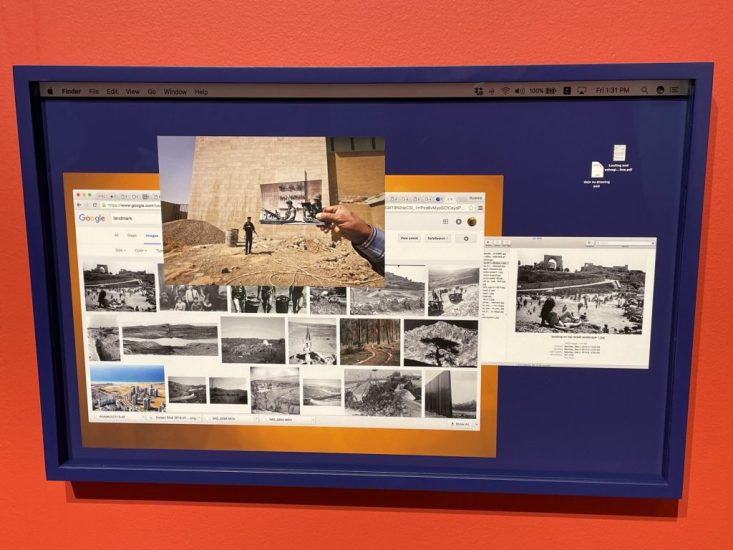 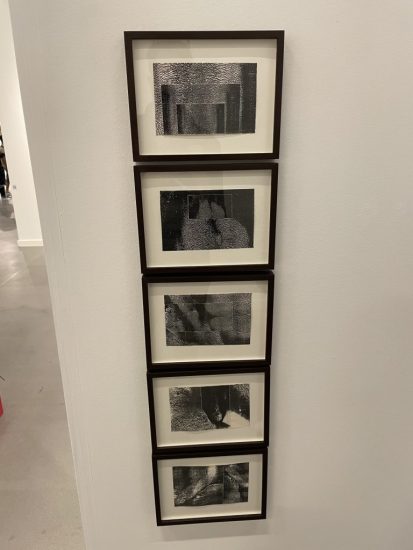 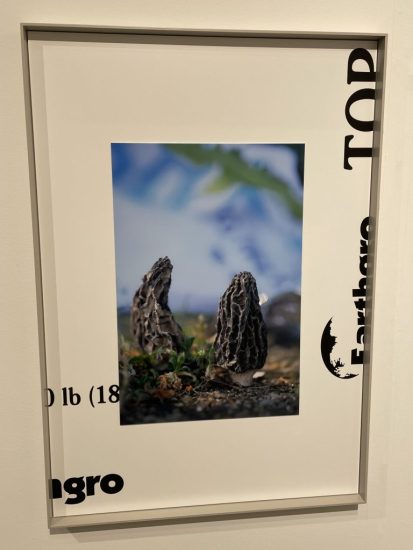 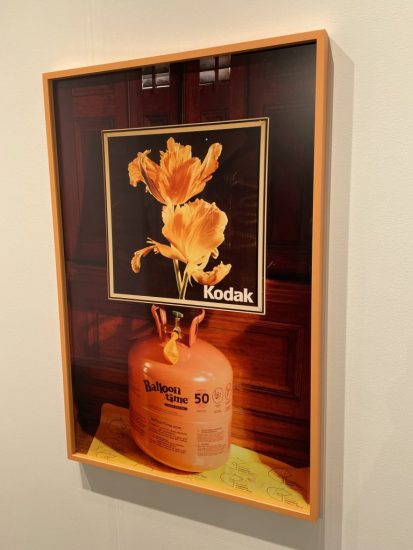 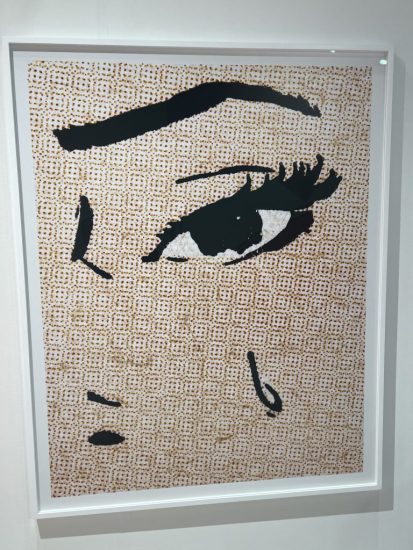 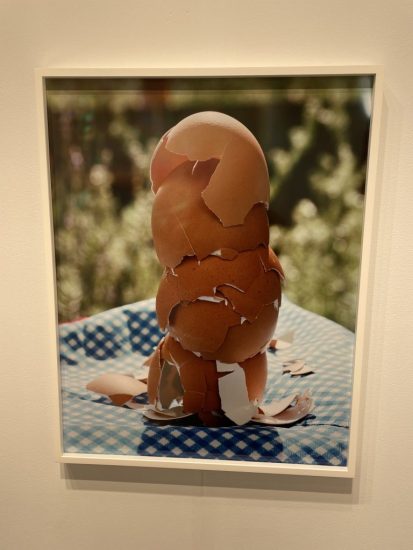 Victoria Miro Gallery (here): This 2017 aerial view by Stan Douglas recreates street protests surrounding the 2011 north London shooting of Mark Duggan. With the help of digital manipulation, Douglas has created an engrossingly detailed tableaux, with clumps of protestors and police in the streets, a helicopter hovering overhead, and the housing blocks and supermarket of the neighborhood laid out like an X. While protests and rallies are often seen as intense clashes at street level, Douglas steps up into the sky to see how they fit into the larger patterns of the gentrifying city. Priced at $150000.

White Cube (here): This Jeff Wall lightbox of a sapling and its supporting stake was made in 1999 as part of a commission to celebrate the opening of the Tate Modern. The tree is actually one of the ones planted on the grounds, its fragile limbs held firmly by the post. Priced at £115000.

Goodman Gallery (here): This 2019 work from Hank Willis Thomas combines an archival image of two Black children posing with a white police officer with a lenticular overlay of the word “fear”. The combination blurs the image to point of approximation, with the huge letters smartly shifting in and out of view depending on the viewing angle. Priced at $46000.

Miguel Abreu Gallery (here): This recent scanner based image by Eileen Quinlan has been printed on a mirror and allowed to trail across the edges of the aluminum frame. Its jittery abstraction feels jagged and tense, with the artist’s finger interrupting the squiggling back and forth motion. Priced at $15000.

Perrotin (here): The strongest part of this new two-image work by Leslie Hewitt is its sculptural box frame. The included images were made in Marfa at the Judd Foundation, but it’s the angled box and its layered cast shadows that give the work its complexity. Priced at $20000.

Alexander Gray Associates (here): This pairing from Lorraine O’Grady’s “Miscengenated Family Album” connects a mother’s kiss across the centuries. Reaching back to ancient Egypt, O’Grady’s pairings of her own family images and those of Queen Nefertiti and her life first took shape as a performance in 1980, and were later installed as cibachrome prints (as seen here). On the heels of O’Grady’s retrospective at the Brooklyn Museum (reviewed here), this powerful project is being better recognized for its lasting importance. Priced at $50000.

Sean Kelly Gallery (here): Frank Thiel is likely best known for his meticulously ordered geometric views of architecture under construction, and this densely layered scaffolding study fits right into that pattern. The image was made right nearby at Hudson Yards in 2014, giving its display at the Shed an extra layer of resonance. Priced at $20000.

Sean Kelly Gallery (here): Jose Dávila has been experimenting with incisive removal for years now, but this triptych of cut away Dan Flavin light sculptures can be counted among his most successful, given the glows of colored light left behind. Dávila’s empty cuts mimic Flavin’s fluorescent bulbs with surprising effectiveness, highlighting the iterative ways that Flavin played with color and form. Priced at $40000.

Sfeir-Semler Gallery (here): This tongue-in-cheek birthday cake for former Egyptian president Hosni Mubarak (on what would have been his 94th birthday) is part of Walid Raad’s first foray into the world of NFTs. The short video clip captures a spinning cake with blasts of flying confetti, offering a subtly mocking celebration for the deposed leader. Part of a larger series called “Festival of Gratitude”, the works feature various 20th century dictators, including Franco and Gaddafi, with the kind of indirect bite that is the hallmark of Raad’s work. Priced at 5 ETH.

Hauser & Wirth (here): This booth was a solo presentation of recent works by Charles Gaines, featuring photographs of London tree branches casting dark shadows across gridded paintings of the full trees underneath. The doubled, almost fractal forms of the branches and the systematic patterns underneath intermingle in satisfying ways, mixing natural order and analytical reconsideration. Priced at $550000.

Mor Charpentier Galerie (here): This portrait comes from a series that Paz Errázuriz made in the late 1980s outside a boxing club in Chile. The photographs were taken just after fights or sparring sessions, and capture a mix of exertion, exhaustion, and in some cases, confidence. This kind of project has been developed further by Rineke Dijkstra and Nicolai Howalt (among others), but Errázuriz’s earlier images remain indelibly immediate and honest. Priced at $16000.

Proyectos Ultravioleta (here): This booth was an installation of the work of Basel Abbas and Ruanne Abou-Rahme, coinciding with an exhibition at MoMA. Still frames capture overlapping windows drawn from their archive, mixing images of Middle eastern landmarks disrupted by ongoing conflict and occupation. Priced at $4000.

The Approach (here): This sculptural work by Magali Reus merges an intimate photograph of mushrooms with fragments of the lettering on soil/compost bags. The found specimens are shot against colored interventions provided by vintage t-shirts, adding surreal twists to the natural environment and leading to results that feel strangely expressive and off-kilter. Priced at £8000.

Andrew Kreps Gallery (here): This new work by Roe Ethridge is a brashly perplexing color study, with a painted orange frame as an accent. The sculptural combination of the dated photographic materials and the helium tank provides plenty of clever visual echoes, particularly between the limp balloon and the tulip petals. Priced at $22000.

The Modern Institute (here): This print from Anne Collier’s continuing “Woman Crying” series breaks the skin tone into overlapping arrays of red and yellow Ben Day dots and turns the facial features into sparse calligraphic gestures. The images from this project have been remarkably consistent, each finding a way to tease abstraction out of the melodramatic comic book subject matter. Priced at $28000.

Galerie Eva Presenhuber (here): Torbjørn Rødland always seems to find an edge of uneasiness in his imagery, and this recent stack of egg shells is no different. Sculptural, sensual, and mildly unnerving all at once, the tower of cracked remains seems to allude to an unseen feast, where idle hands made fun with the gooey leftovers. Priced at $18500.