With the New York art world having seemingly concluded that the pandemic is now in a more manageable stage, the Armory Show returned to town this past week, largely maskless and in a maximalist mood. While the 2021 version of the fair (report here) was quite a bit more subdued and tentative in its inaugural outing at the massive Javits Center (with many fewer international galleries in attendance, given the uncertainties of that moment in time), this year’s fair was both bustling and seemingly endless, the 250+ booths and installations filling aisle after aisle (after aisle). While several of the mega galleries opted out, the large and mid size realms were well populated, with plenty of smaller galleries and collectives represented in the booths in the clusters near the corners of the convention center.

As we have found again and again at contemporary art fairs like this one, the photography to be discovered at this year’s Armory Show was generally thin on the ground, with most of what was presented leaning toward the very most contemporary work, much of it made in the last year or two. Sprinkled in here and there were a handful of re-emergent works from the past, as well as a somewhat broader representation of Black and Indigenous photographers. But the raw numbers don’t lie – that I only came up with some 25 intriguing photographs to feature below, out of the entire spaciously sprawling mass of art on view, tells us something about where photography fits in the post-pandemic contemporary art mindset and what gallerists think they can sell right now.

The slideshow below covers what caught my attention in the various booths, and as usual, the individual images are accompanied by linked gallery names, artist/photographer names, and prices where appropriate, along with further description and analysis. 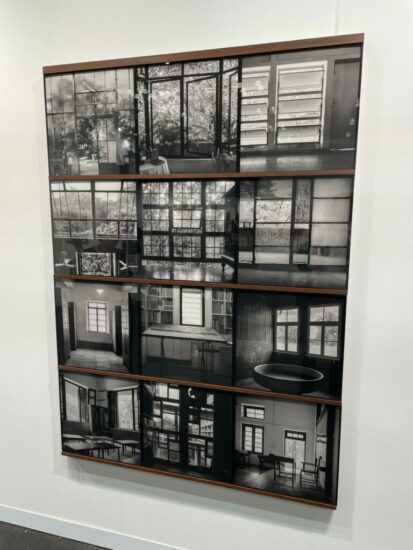 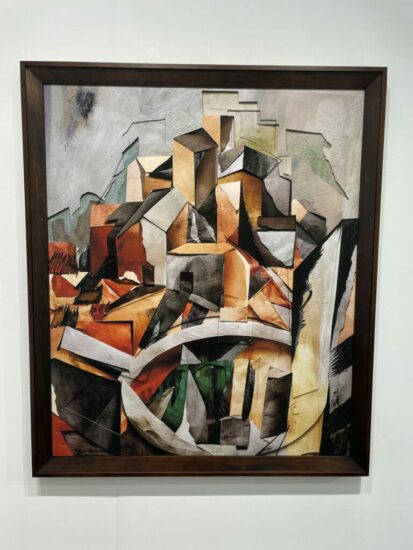 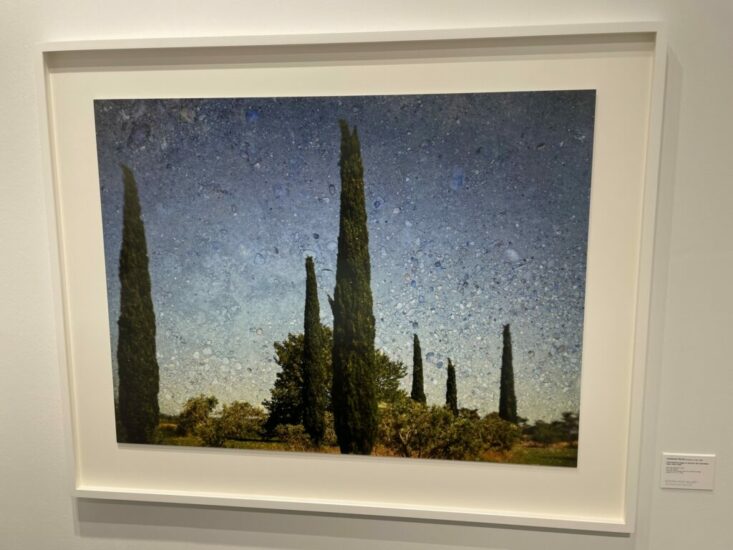 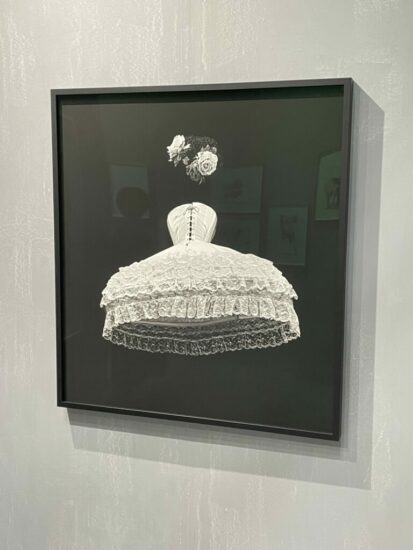 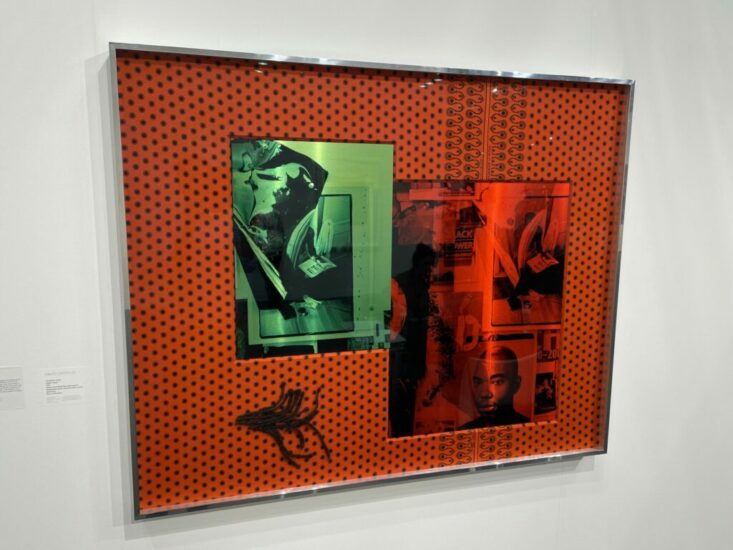 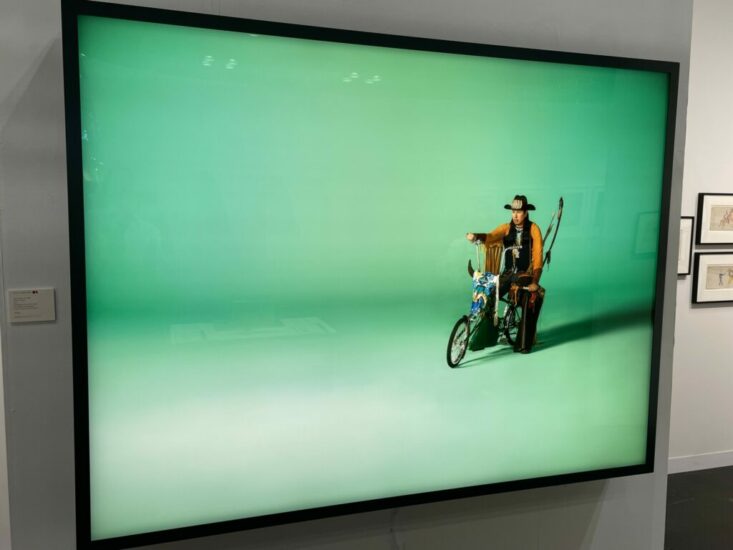 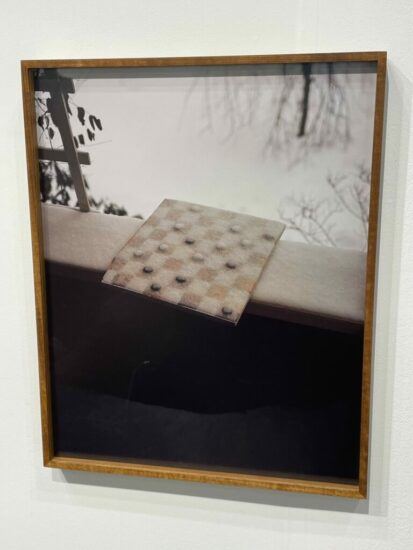 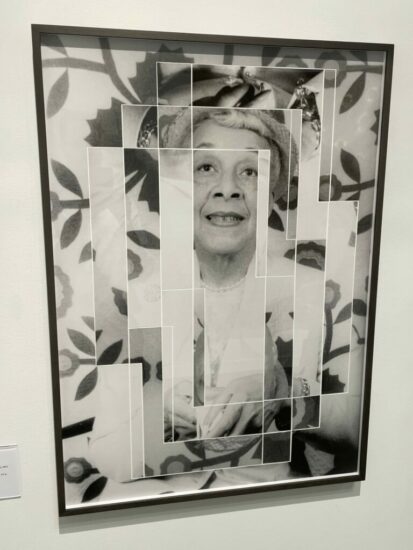 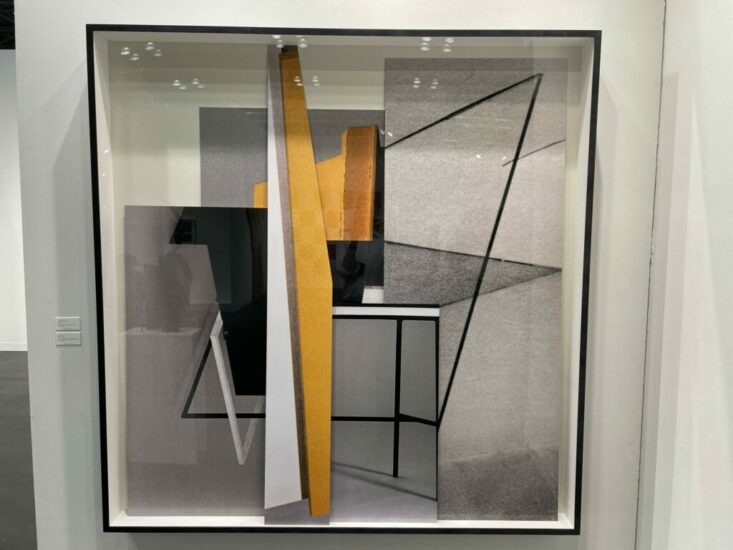 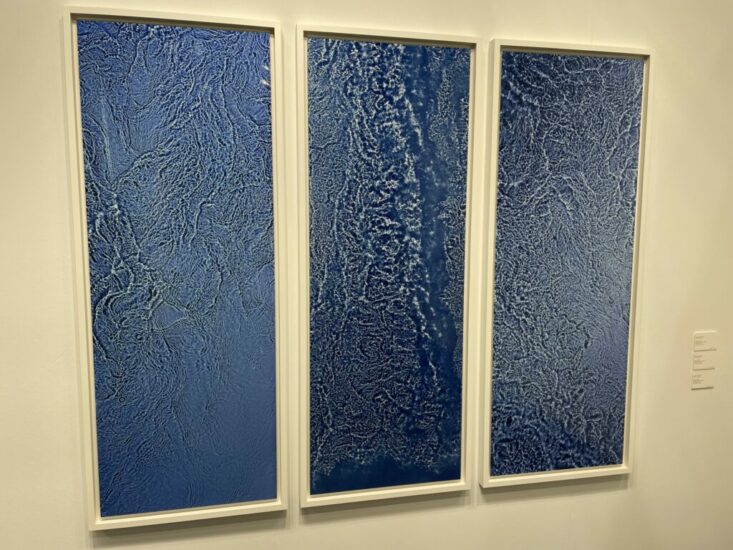 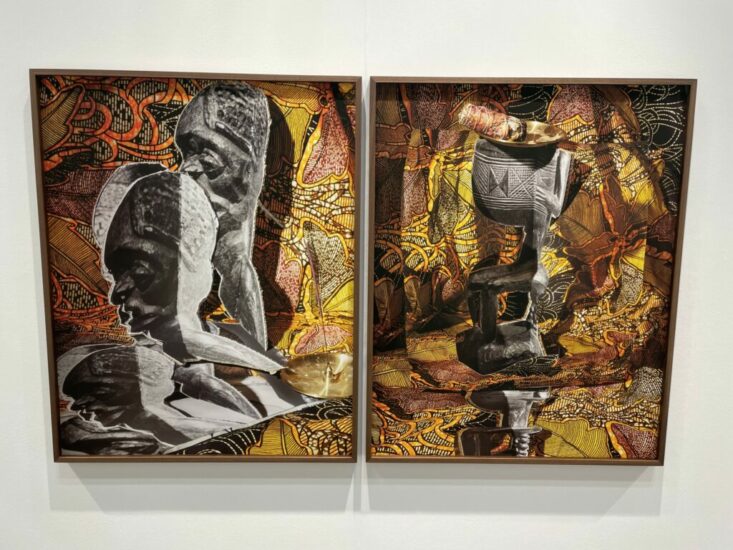 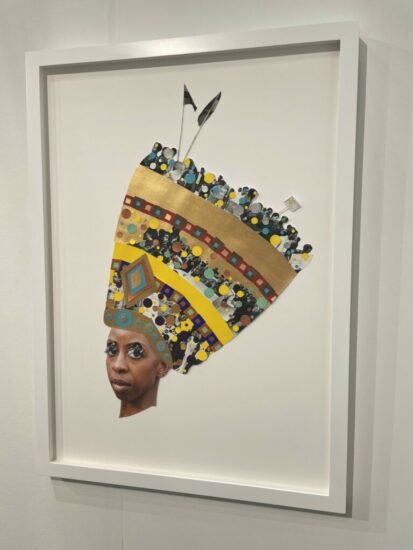 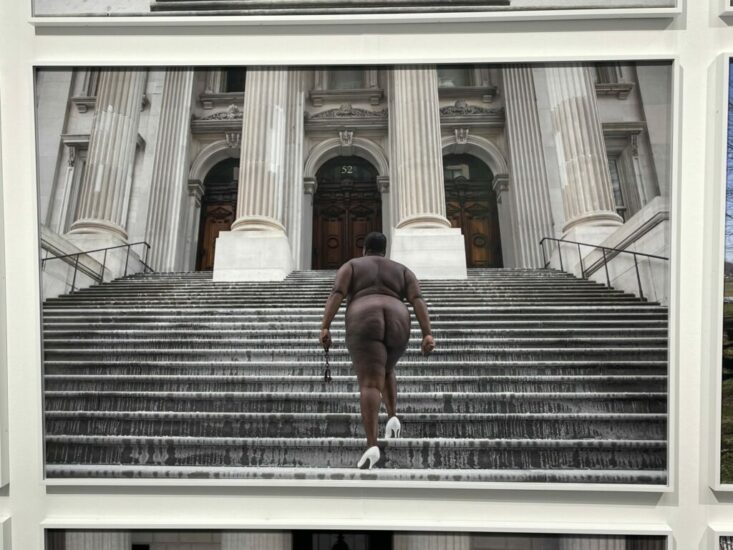 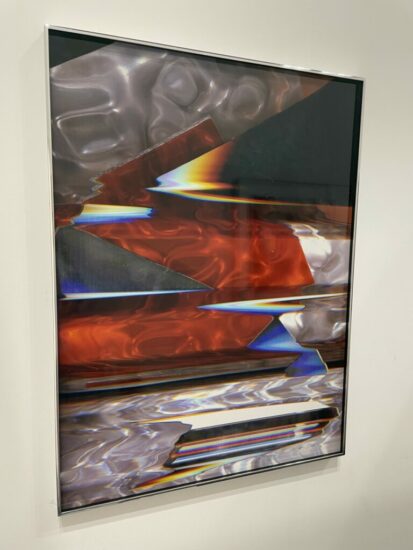 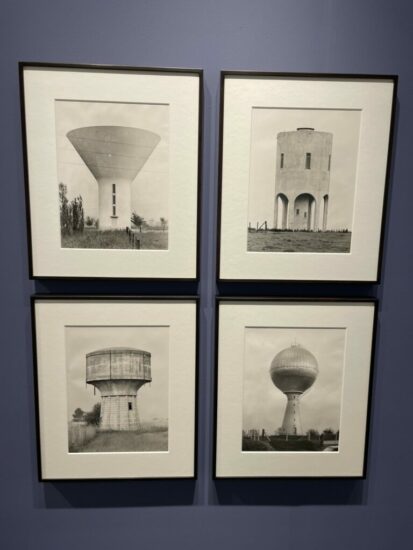 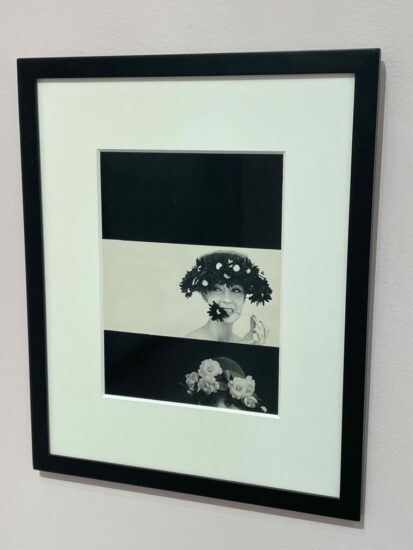 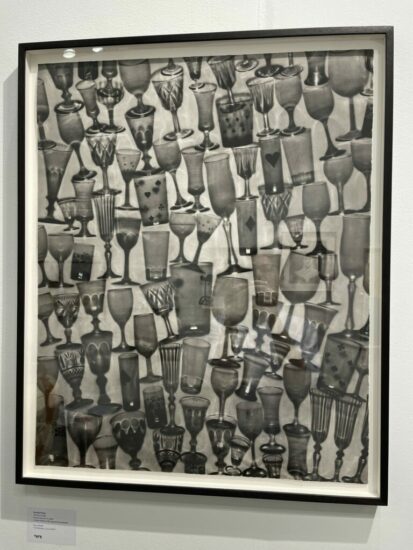 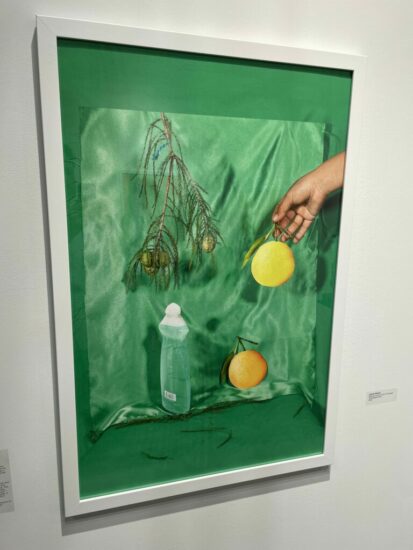 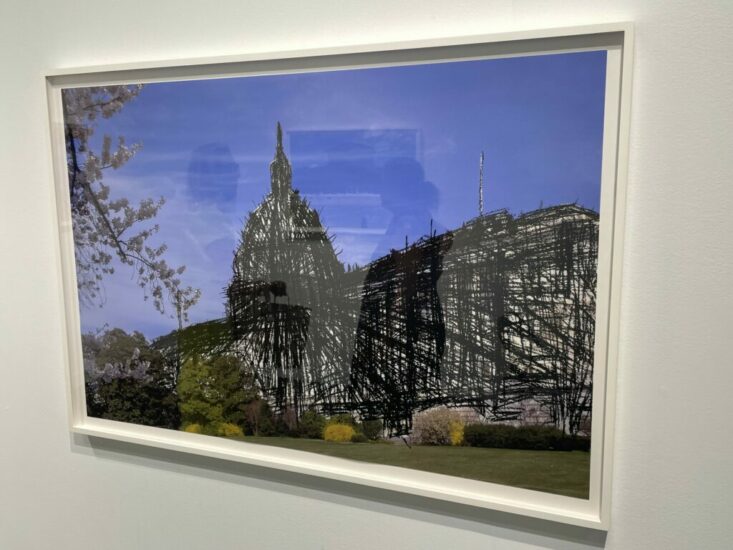 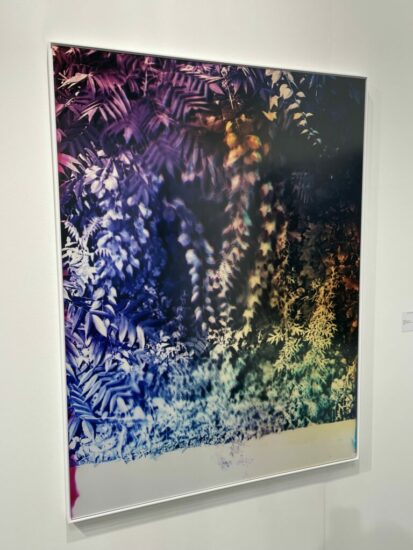 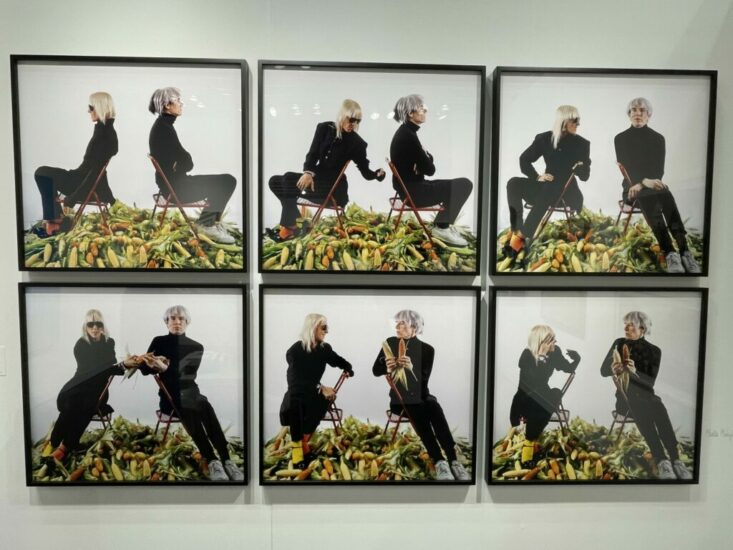 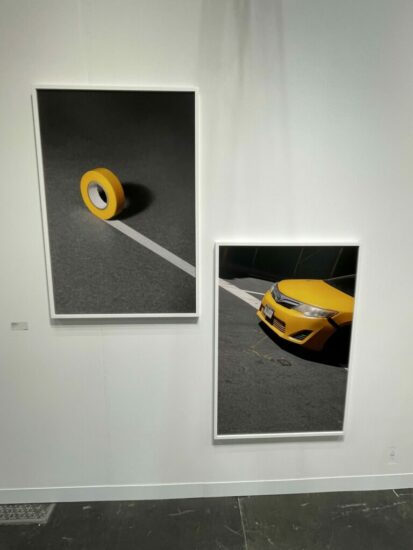 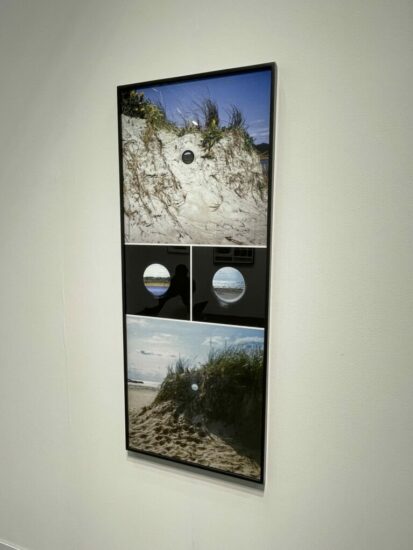 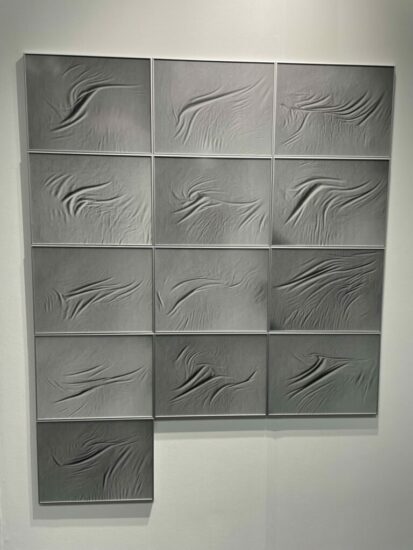 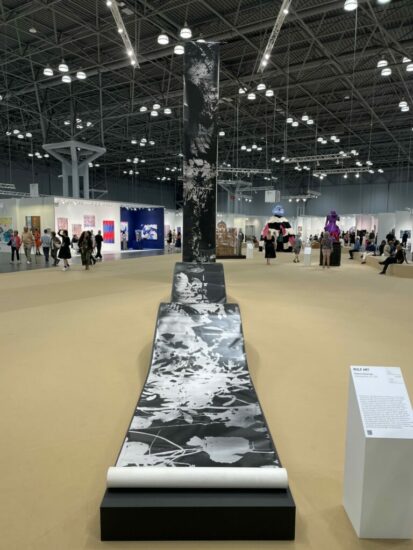 Frith Street Gallery (here): This 2022 grid of 12 window photographs by Dayanita Singh features both the various geometries of the window frames and the muted quality of the natural light as seen from inside. The visual rhythm of the grid has been smartly tuned, moving from smaller to larger panes and back again, with the sleek wooden support structure allowing the images to be reordered. As a study of quiet isolation, it’s engagingly intricate, without losing its sense of serenity. Priced at £85000.

Galeria Nara Roelser (here): In this 2021 work from his ongoing Surfaces series, Vik Muniz reinterprets Picasso, with cut layers of imagery that shift in and out, both physically and visually. The work becomes a tumbling mountain of geometries, with trompe l’oeil effects that upend our sense of flatness and depth. Priced at $67000.

Edwynn Houk Gallery (here): This 2022 work from Abelardo Morell finds the artist using his tent camera to channel the aesthetics of Van Gogh. The cypresses create insistent green verticals that anchor the composition, while the camera looks down at the rocky pathway below the artist’s feet, the small pebbles punctuating a soft blue gradient that replicates a painterly starry sky. The layered image employs Morell’s unique photographic process with an elegant lightness of touch, balancing respectful homage and understated innovation. Priced at $24000.

Mariane Ibrahim Gallery (here): There’s something ethereal about this 2021 image by Ayana V. Jackson. The corseted dress hovers in the blackness like a frilly vase, with the bouquet of flowers poised above it like a head turned away, settling into an in between zone between allusive portraiture and still life. Priced at $15500.

David Castillo Gallery (here): Many of Lyle Ashton Harris’ recent works have appeared at art fairs, each bringing together a unique combination of African fabrics, allusive images of his collaged studio walls, locks of his own hair, and shaped three dimensional spaces. And while several have featured saturated red as a dominant color, this one seethes with such force that it literally grabbed me from dozens of paces away. Between the spotted Ghanian fabric and the tinted imagery, it’s a work that shimmers with boldness of color and mood. Priced at $85000.

Donald Ellis Gallery (here): Dana Claxton’s 2022 lightbox image of Lakota man riding a low rider bicycle deftly mixes visual symbolism. Riding out in an undifferentiated sea of green space, he wears a mix of cowboy and Native American cultural signifiers, with a painted skull mounted on the front of his bike. It’s a knowing mix of modern and traditional, reshuffling the potential meanings and resonances. Priced at $55000.

Galerie Loock (here): Gregory Halpern’s new project is centered on his hometown of Buffalo. The booth featured an unusual set of three sculptural houses made from imagery, but this more modest photograph of a snow dusted checkerboard (from 2022) felt more understated and poignant (in a post pandemic way), as though time stands still and the game was left midway. Priced at $4800.

Hales Gallery (here): This 2022 collage comes from Andrea Geyer’s Constellations series, where she has reimagined portraits of influential modern women. Here she juggles a portrait of Nora Holt, the Harlem Renaissance musician and composer, mixing the rectangular shards into a more rhythmically shifting composition. Priced at $17000.

Sikkema Jenkins & Co. (here): This new work from Erin Shirreff continues her ongoing experiments with fragmented slices of imagery physically layered together in space. Angles and lines in black, white, and yellow intersect and tussle as they lay atop each other, leading to one of her most vibrant, lively, and complex compositions. As these works get more intricate, they are getting stronger and stronger, pushing photographic assemblage into more sophisticated territory. Priced at $45000.

Ingleby Gallery (here): These 2020 prints by Susan Derges are actually conversions of older made-in-the-water photograms scanned and printed digitally. They’re as mesmerizing as ever, now with an even more sparkling brightness. Priced at £15000 individually, or £40000 for all three prints.

Yancey Richardson Gallery (here): This 2022 diptych by David Alekhuogie continues his exploration of appropriated imagery of African artifacts. Archival pictures of masks and sculptural figures have been affixed to cardboard backings, creating cut out three dimensionality that the artist has then staged inside the swirling patterns of African fabrics. Repetitions pile up in the left image, while rephotography and doubling add some deliberate confusion on the right, with both setups shown respect with burnt offerings. Priced at $16000.

Addis Fine Art (here): This recent collage by Helina Metaferia turns archival imagery from Black Power protests into elaborate headdresses for activist women. The works aesthetically recall Lorna Simpson’s collages, but with a sense of active history embedded in the decoration. Priced at $13500.

Higher Pictures Generation (here): This booth was a solo presentation of the work of Nona Faustine and her powerful project White Shoes. I first came across Faustine’s work back in 2016 (reviewed here), and in the years since, its momentum and resonance has only continued to accelerate. These prints are now larger (and thereby more imposing), and seen hung together nearly edge to edge in a small booth, they offer a soberingly insistent reclamation of overlooked Black histories. Priced at $300000 for the portfolio of 20 prints.

Vistamare (here): This 2020 work by Eileen Quinlan digs further into her experimentation with scanner-based imagery. Recognizable shards of crumpled plastic quickly dissolve into squiggling flared distortion, adding elements of chance to the process of abstraction. Priced at $14000.

Gallery Ludorff (here): With the superlative Bernd & Hilla Becher retrospective now on view at the Met (reviewed here), it’s not at all surprising that a few galleries would offer works by the Bechers to try to capitalize on this moment of renewed interest. This vintage typology of sculptural water towers (from 1972-1983) provides a solid example of what’s still available. Priced at $95000 for the set of 4 prints.

Howard Greenberg Gallery (here): While the William Klein retrospective at the ICP is now closed (reviewed here), this vintage rarity made for a Vogue pattern book highlights Klein’s innovative eye for fashion setups. High contrast strips of light and dark create an alternating pattern, with the flowered hats and eyes adding a sparkle of playfulness. Priced at $60000.

Wave Pool (here): This 2022 photograph by Lorena Molina uses staging and manipulation to confuse our sense of what is “real” and what is constructed. Her clever use of paper cutouts and layering connects to the work of Daniel Gordon, but with a more conceptual sense of overt visual play. Priced at $1750.

Lower East Side Printshop (here): This 2022 work by Dread Scott comes from a series called Obliterated Power. Here the US Capitol building is covered with dark gestural scratching, essentially erasing it from its surroundings; other works in the series do the same to images of the Pentagon and the Supreme Court buildings. The effect is direct and intentional, with symbolic removal as an act of protest. Priced at $3500.

Halsey McKay Gallery (here): This 2022 photogram by Bryan Graf is one of a series of works made from the same image of hanging greenery. Here the leaves flare and blur in shades of purple and scorched pink, with color residues adding to the feeling of uncertainty. Priced at $16000.

Henrique Faria Fine Art (here): This series of images by Marta Minujín features the artist and Andy Warhol in a sequential negotiation, using spray painted ears of corn as a symbol of the Argentinian debt being paid off with traditional foods. The series was originally a total of 12 images, of which half have been lost, leaving us just part of the iconic conversation. Priced at $350000 for the set of 6 prints (originally made in 1985 and printed in 2011).

Klemm’s (here): This booth hosted a solo presentation of works from Viktoria Binschtok’s recent project Networked Images/Cluster. Mimicking the way our eyes jump from image to image in our online world, the works freely mix pictures of all kinds into linked pairs and groups. This 2020 diptych matches a yellow roll of tape and a yellow taxi, connecting the line formed between the tape and paint on the street. Her works are at once visually smart and conceptually provocative, pulling us through unlikely patterns of visual echoing. Priced at $16000 for the diptych.

Parafin (here): This 1972 work by Nancy Holt (printed in 2012) is called Views Through a Sand Dune, and features a single piece of plastic pipe placed inside a beachside mound. The photographs show us the scene from both sides, as well as the views through the portholes in both directions, creating a doubled sense of space and vision. It’s an elemental intervention in the land, but a highly elegant result. Priced at $35000.

Vintage Galéria (here): The simple gestures of sleep, as seen in the rumpled sheets of the morning, fill out this 2016 set of photographs by Dora Maurer. Each morning offers a new set of lines and curves, like waves on the sand, sculpted drapery, or line drawings on paper. Priced at $25000 for the set of 13 prints.

Rolf Art (here): As part of the Platform installations in the center of the fair, this 90 meter long photogram by Roberto Huarcaya unspooled across the carpet and up into the air. Made in the Amazonian rainforest in 2014, the work is filled with the forms of the jungle, with light leaf patterns filtering through the darkness of the moonlight. It’s an extreme example of a photogram made at massive scale, with the frieze of imagery built section by section. POR.