My last trip to an art fair was in early March of 2020. It was the Armory Show, here in New York, and I vividly remember feeling like I was taking an as-yet-entirely-undefined risk in attending. I wrapped my face with a scarf (this was before wearing a mask became commonplace), awkwardly avoided shaking hands, and tried to get in and out without lingering too long, not really knowing what the consequences of gathering with so many people might be. Less than a week later, the city went into full lockdown.

In the months that followed, the many art fairs that would have normally dotted my calendar were either cancelled, or re-invented as virtual viewings. So this Frieze New York art fair of 2021 was my first trip back to a fair in 14 months. Gone are the leisurely boat trip to Randall’s Island, the massive white tent, and the warren of nearly 200 booths to systematically process. In its place, something more measured, and some might say tentative, has been created. Frieze New York is no longer a destination, an excursion, or a day’s outing to be immersed in art, but something else in the midst of re-invention.

Housed in the confines of The Shed, a multi-use space in the recently re-developed Hudson Yards not far from the Chelsea galleries, the new Frieze New York feels like a more standard art fair, notwithstanding the towering ceiling heights of this sparkling new facility; given that we are starting from scratch and re-inventing this genre for a new post-pandemic age, the fair wasn’t particularly innovative, but valid caution might make a toe-in-the-water approach like this one entirely logical. Its exhibitors were a much tighter bunch than before, some 60+ galleries, mostly from nearby locales, making the mix less eclectic and unexpected than usual. And as one might expect, the crowds were significantly smaller (tickets were scarce), and the entry procedures for vaccination or recent test verification were appropriately stringent and unforgiving. But once inside, and up the switchbacking lines of escalators, it was indeed an art fair like ones we have visited before, which was altogether reassuring in its own way – it felt almost “normal”, if anyone knows what that word means now.

As usual, it takes some effort to uncover the photography in a contemporary art fair like this one, but the good news is that there was actually more photography on view than I expected, especially given the early press reports of an avalanche of painting. What follows below is a slideshow of some of the photographic highlights. In general, I have tried to avoid featuring works that have been shown in local gallery/museum shows, and have attempted to focus on “new” works made in the past year or two (plus a handful of vintage discoveries), so the obligatory Cindy Sherman prints (now at Hauser & Wirth) didn’t make the cut. Each work is supported by a link to the appropriate gallery, the artist’s name, the price, and a short discussion of the piece. The slideshow loosely follows my path through the fair, moving upward starting on the 2nd floor and continuing through to the 4th, 6th, and 8th floors. 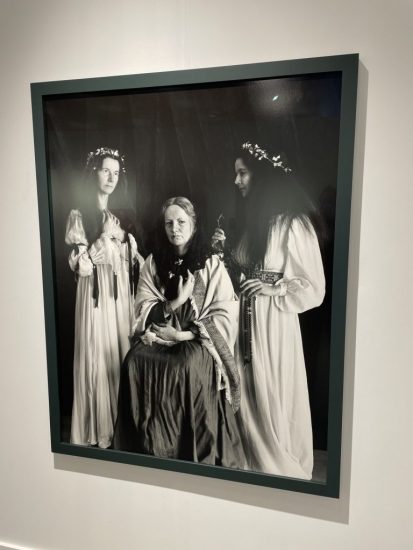 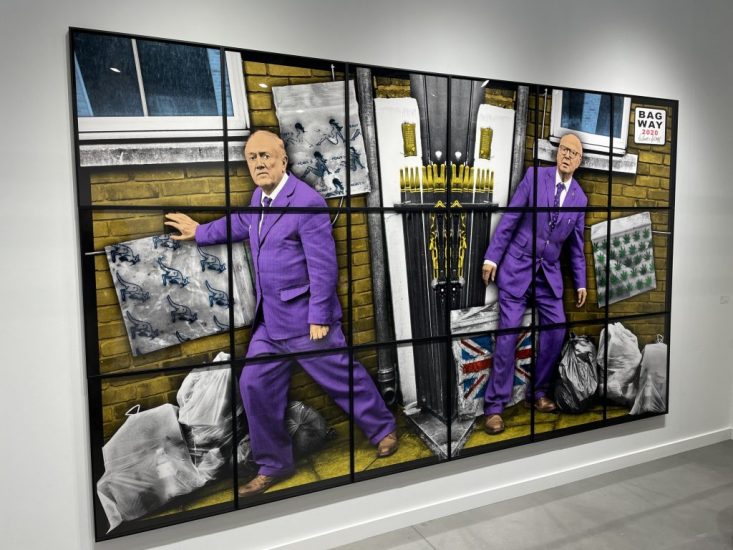 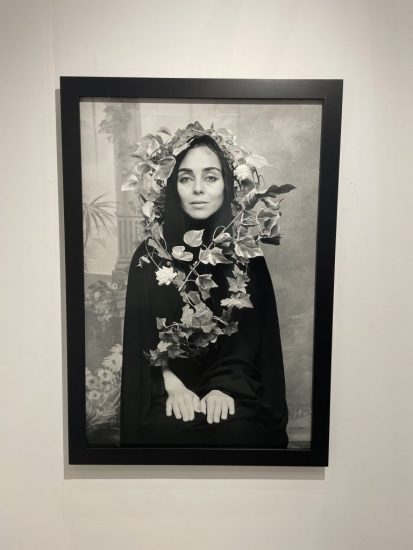 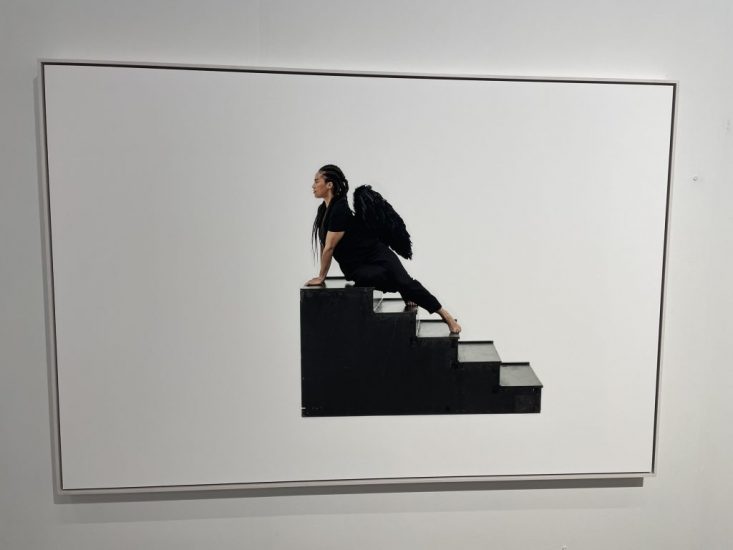 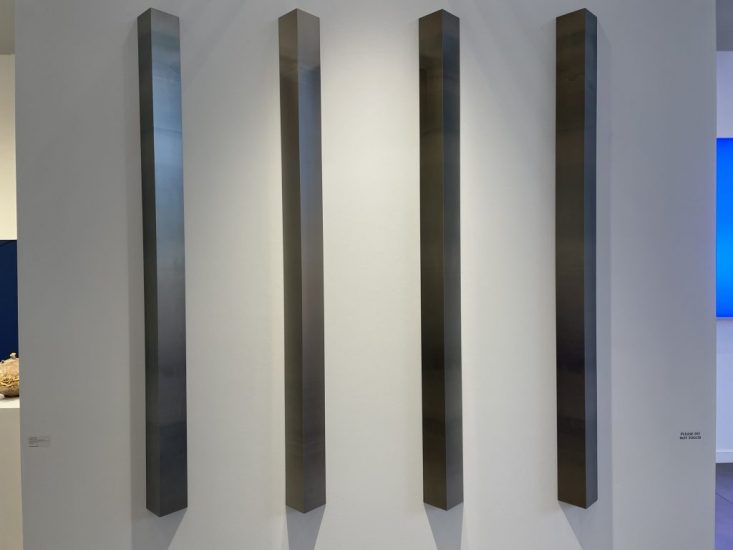 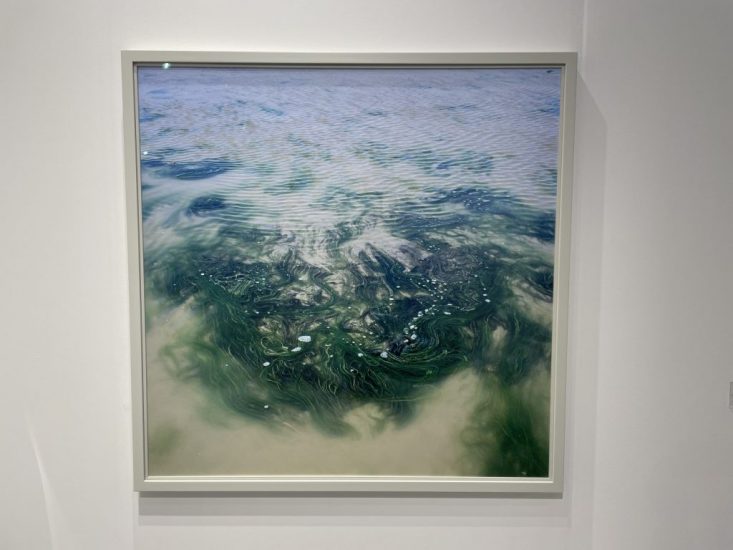 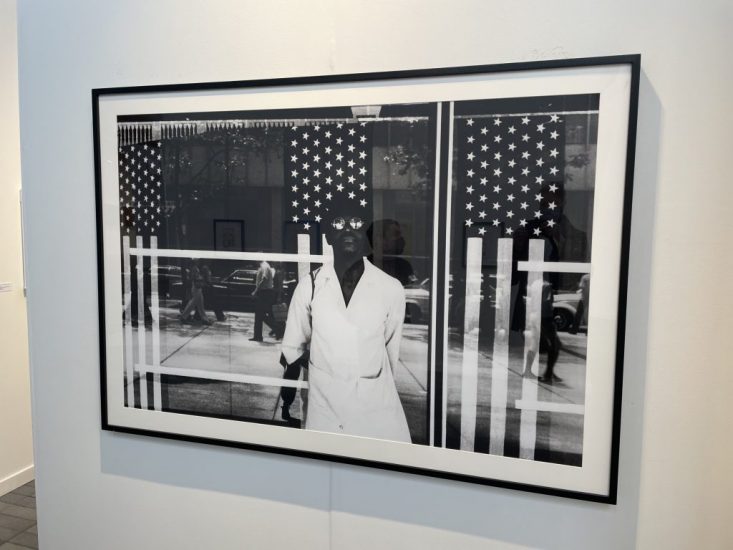 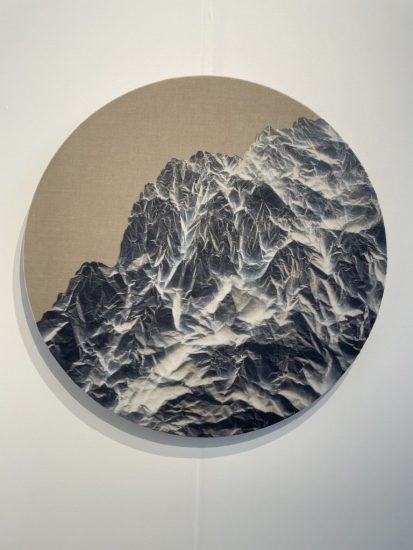 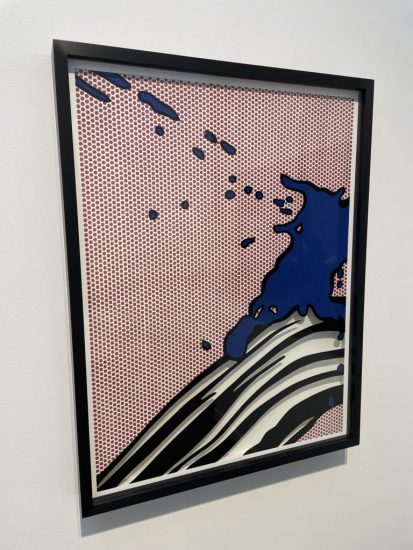 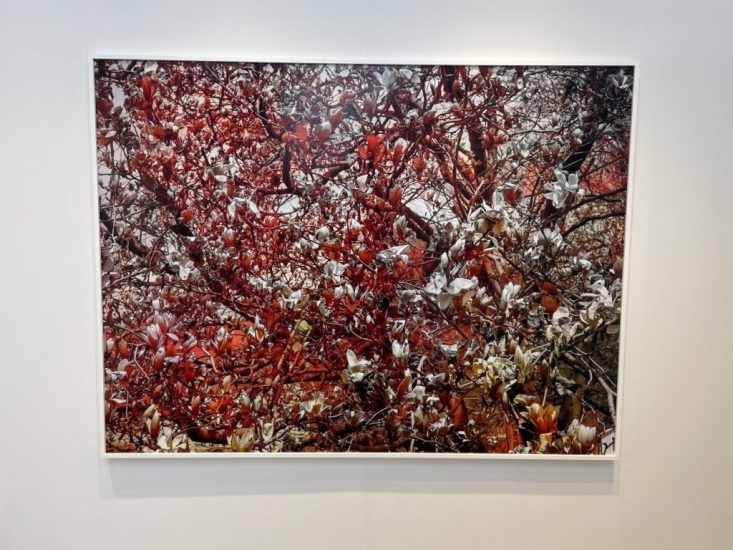 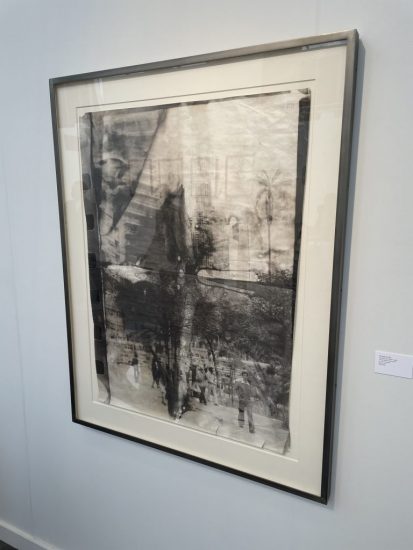 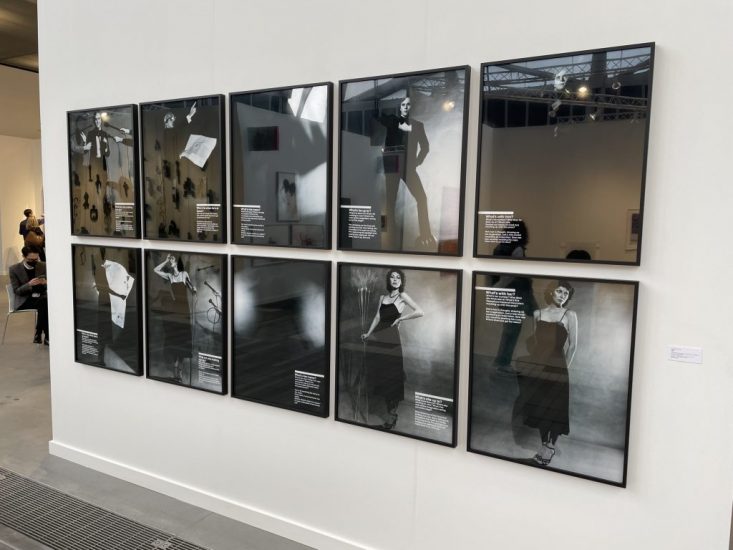 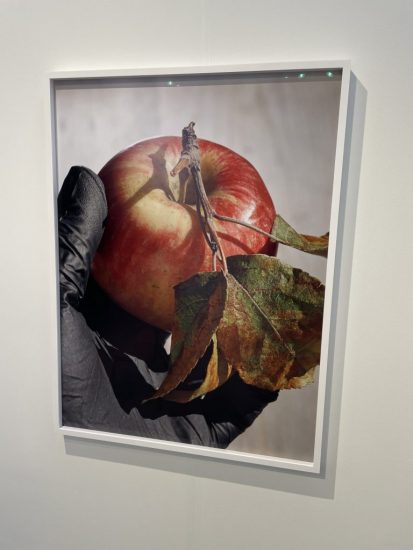 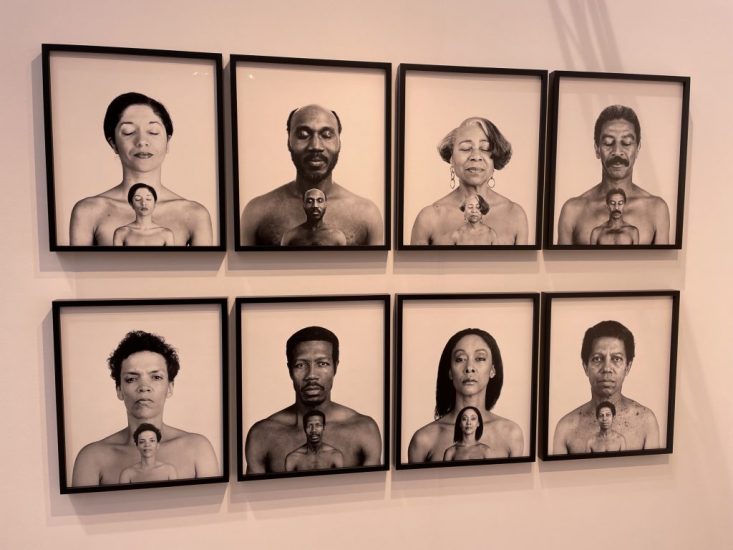 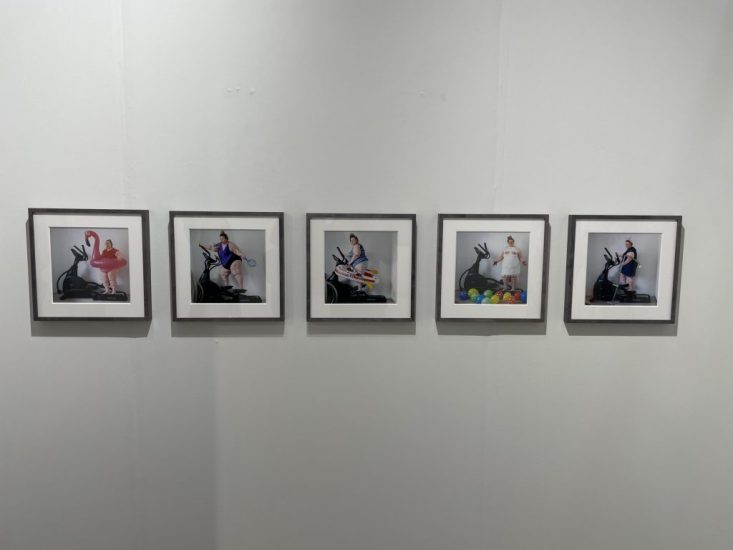 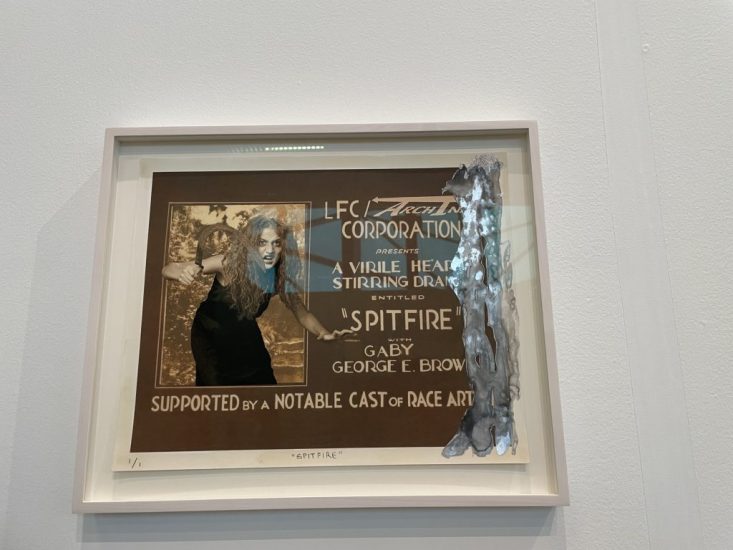 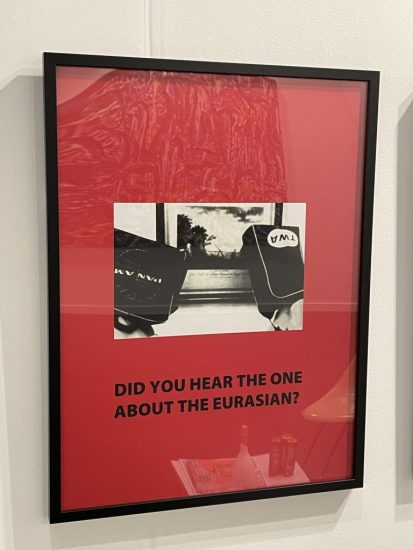 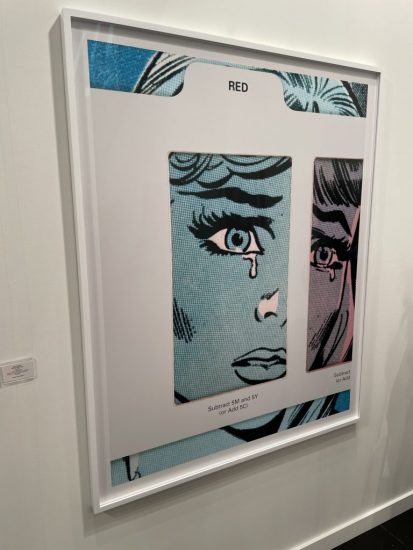 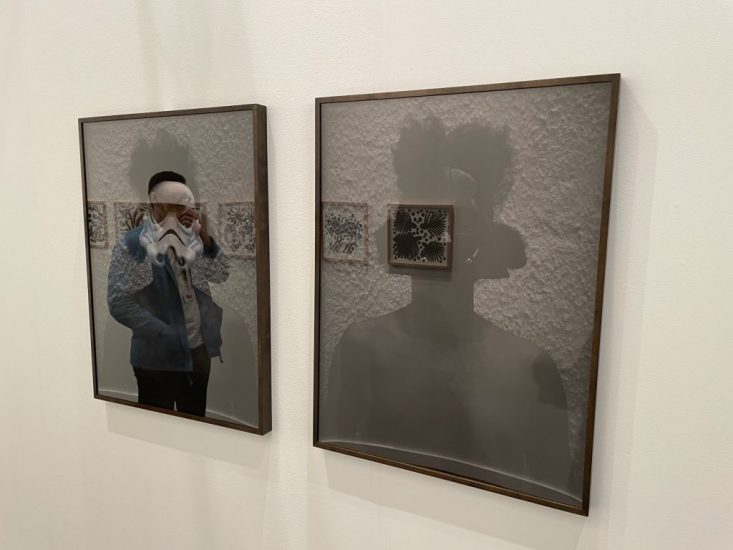 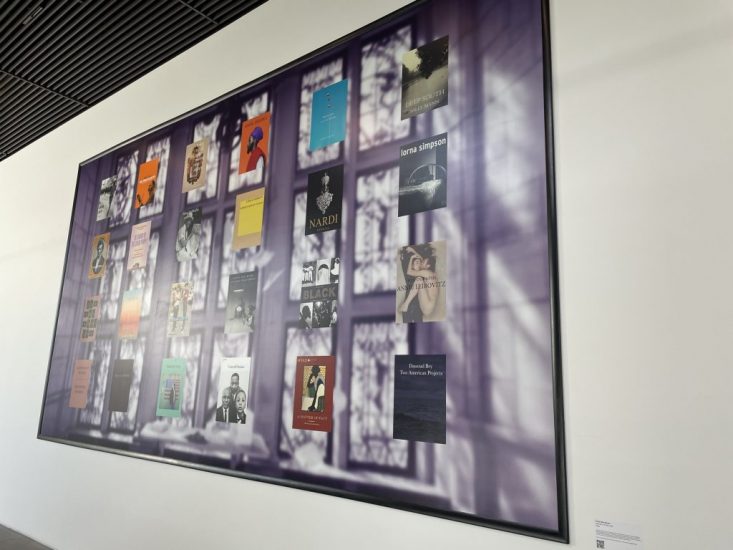 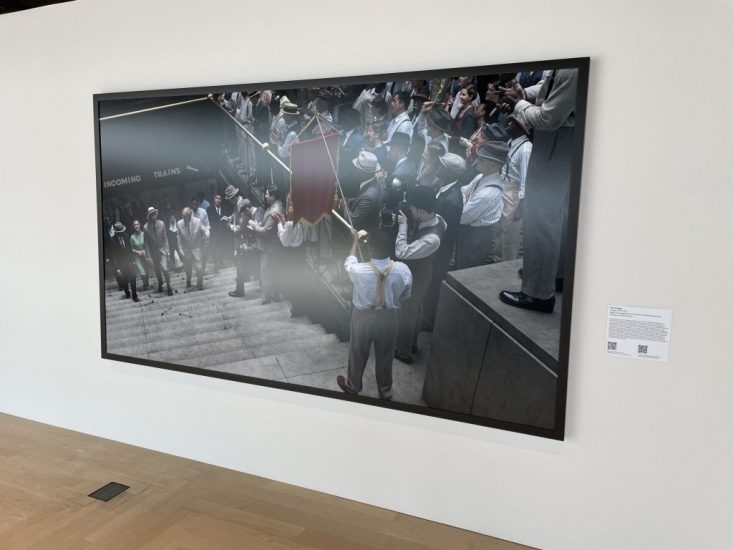 Tanya Bonakdar Gallery (here): This 2019 work from Gillian Wearing continues her series of eerie artistic homages. Here she intimately channels the ghost of Julia Margaret Cameron and two muses, playing all three roles herself (one masked, the others unusually using her own face). Apparently there is a Guggenheim retrospective in the works for Wearing, so perhaps we will soon be able to see more of these haunting impersonations hung together. Priced at £35000.

Lehmann Maupin (here): After experimenting with distorting their faces with expressive beards in their last series, Gilbert & George have returned to their full dapper-suited selves in this new work. Patterned drug bags, piles of garbage, and a tightly mirrored space add to the gritty, uneasy, off-balance 2020 mood. Priced at £130000.

Goodman Gallery (here): This image from Shirin Neshat’s early 1990s Women of Allah series is one of the few pictures from that project without overpainted calligraphy. Here the halo of leafy ivy and the painted studio backdrop quietly embellish the self-portrait. Priced at $125000.

Goodman Gallery (here): This new photograph from writer/artist Grada Kilomba comes from her recent series Heroines, Birds and Monsters. Drawn from the characters in her films, she takes on the role of the winged sphinx, powerfully climbing a black stairway that ends in emptiness. Priced at $15000.

Miguel Abreu Gallery (here): Picking up on the rhythmic repetitions from her last series, Liz Deschenes pushes her silvery photogram surfaces up into peaked triangles in this 2019 work. Like the accordion bellows of a large format camera, the surfaces fold back and forth, creating changing light conditions across the planes. Priced at $150000.

White Cube (here): This new work made during the pandemic finds Jeff Wall looking closely at the seaweed and rippled waves in Vancouver. It’s more abstract than Wall’s usual scenes, the seaweed finding an unexpectedly elegant edge of menace as a shivering Medusa’s head of bubbling greenery. Priced at $65000.

Jenkins Johnson Gallery (here): Between her inclusion in the recent Kamoinge show at the Whitney (here) and a new monograph from Aperture (here), Ming Smith has been riding a recent wave of interest in her work. This larger modern print of one of her signature images (minus the dripped red overpainting that often accompanies the flags) was prominently placed on the outside wall of this booth, taking advantage of the moment. Priced at $76000.

Sean Kelly Gallery (here): Wu Chi-Tsung isn’t the first photographer to make illusionistic mountains out of paper, but his crackled cyanotypes certainly deliver on the deception. Affixed to a round canvas, the image recalls ancient porthole windows arranged to feature mountain landscapes. Priced at $25000.

Sean Kelly Gallery (here): Roy Lichtenstein’s iconic brushstroke paintings were already filled with artistic subversiveness, but Jose Dávila has smartly turned the crank a few notches further with his photographic reinterpretations. Here he enlarges the red Ben Day dots (and the blue of the painted swoosh) until they break down further into the aggregate colors of photographic printing. He also physically cuts away the white portions of the gestural brushstroke, leaving emptiness, and changing the nature of the mark making once again. Priced at $38000.

Pace Gallery (here): This all-over floral image by Trevor Paglen comes from his recent Bloom series. Starting with his own black-and-white images, Paglen feeds the photographs through machine learning systems that then apply the colors to the picture. The result is perplexingly unexpected (which isn’t easy with floral subject matter), with tints of red washing across uneven areas of the composition. Priced at $50000.

Michael Werner Gallery (here): This large 1983 photograph by Sigmar Polke was made in São Paulo. Polke takes the contrasts of the skyscrapers and park setting and pulls them through an expressive process of folding and chemical washing, the sprocket holes on the side adding a further interrupting element of physicality. Priced at $380000.

Mitchell-Innes & Nash (here)/Esther Schipper (here): The booth was dedicated to the works of General Idea, the collective formed by AA Bronson, Felix Partz and Jorge Zontal in the late 1960s. This set of images plays with (and reverses) the tropes of gendered advertising, placing both the man and woman in typically masculine and feminine setups. Modern prints, priced at €140000.

Alexander Gray Associates (here): These two works were not included in Lorraine O’Grady’s terrific retrospective at the Brooklyn Museum (here). Made during O’Grady’s early 90s period of experimentation with photomontage, they combine portraits of sitters in different states of mind. Priced at $60000 for each set of 4 modern prints.

Nino Mier Gallery (here): These irreverent self portraits by the Finnish photographer Iiu Susiraja place her on a treadmill in various swimsuits and summer attire. Her deadpan expressions while wearing a pink plastic flamingo floatie or rowing an inflatable boat add to the self-deprecating comedy. Priced at $2500 each.

David Lewis Gallery (here): We’ve seen Barbara Bloom’s fake travel posters from the 1980s before, but in the context of recent Asian hate crimes and Asian-Americans feeling exposed, the resonance of this particular example felt even more bitingly surgical. Modern prints, priced at $15000.

Anton Kern Gallery (here): This new work from Anne Collier builds upon her recent series of cartoon tears (here). Kodak filters have been laid across the cartoons, overtly bringing photography back into the mix, creating alternate windows of tinting, and playing with the physicality of the outdated paper objects. Priced at $28000.

Mendes Wood DM (here): The Brazilian artist Paulo Nazareth has made a number of conceptual works tying objects to his own head, including large jungle leaves and bread loaves, actively wrestling with the legacies of colonialism. This new diptych uses Star Wars masks to consider the polarities of black and white in his home country. Priced at $20000.

Vision & Justice: As part of celebrating (and engaging with) Sarah Lewis’s multi-faceted course/publication/project (here), Carrie Mae Weems made a massive vinyl wall hanging consisting of some of the books/authors/artists included.

Vision & Justice: Tucked on a side wall near the champagne bar on the 8th floor, this Stan Douglas image on view as part of Sarah Lewis’s project was probably overlooked by many. In it, Douglas re-stages the 1934 arrival of Black labor organizer Angelo Herndon at Penn Station.

JTF (just the facts): A total of 19 color photographs, framed in white and unmatted, and hung against white walls in a single room gallery space and the office area ... Read on.