The photography at this year’s Frieze New York art fair seems to divide itself into two very distinctly separate camps – the brand new and the rediscovered old – with very little in between. Fresh from the framer works that were made in the past year or two are almost evenly balanced by a parade of somewhat lesser known photographs from the 1970s and 1980s.

The consistency of this duality implies that a model that works for galleries is converging toward a repeatable formula. Galleries seem to have concluded that collectors (and to a lesser extent curators and institutional buyers) want to think of themselves as discoverers, and so they are filling their booths with works that appeal to that mindset – either I’ve discovered something fresh and unseen, or I’ve rediscovered something important others have missed or overlooked, and in either case, I can congratulate myself on being so clever. Given that photography may not be the primary medium of interest for many of the collectors at Frieze, a photograph has to work a bit harder to get attention amid the surrounding cacophony, and so clearly taking either the “new” or the “old” path makes a certain degree of practical sense.

As usual, it takes some effort to uncover the photography in a sprawling contemporary art fair like this one, but persistence and patience are generally to be rewarded. What follows below is a tightly narrowed slideshow of photographic highlights from this year’s fair. In general, I have tried to avoid featuring works that have been shown in local gallery/museum shows, or have made the rounds of the fairs to such an extent that their inclusion has become predictable. Each work is supported by a link to the appropriate gallery, the artist name, the price, and a short discussion of the piece. The slideshow loosely follows my path from the far left of the fair (as entering from the North gate) to the right. 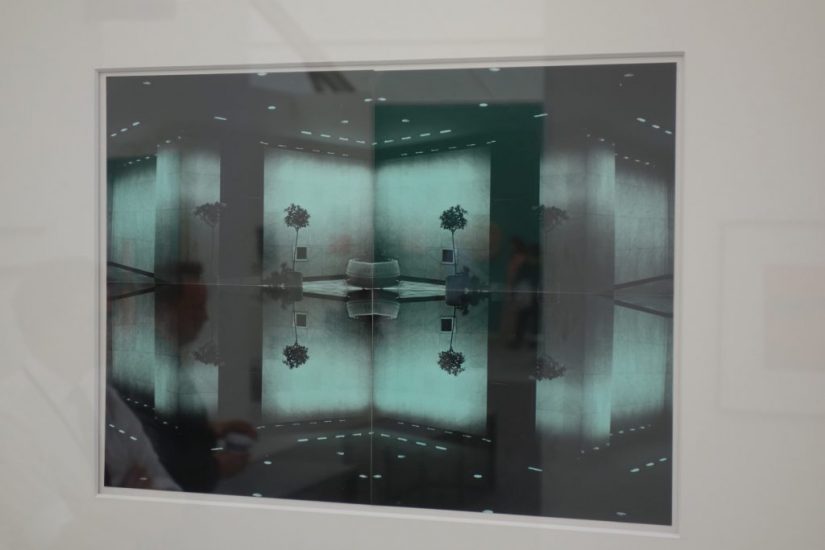 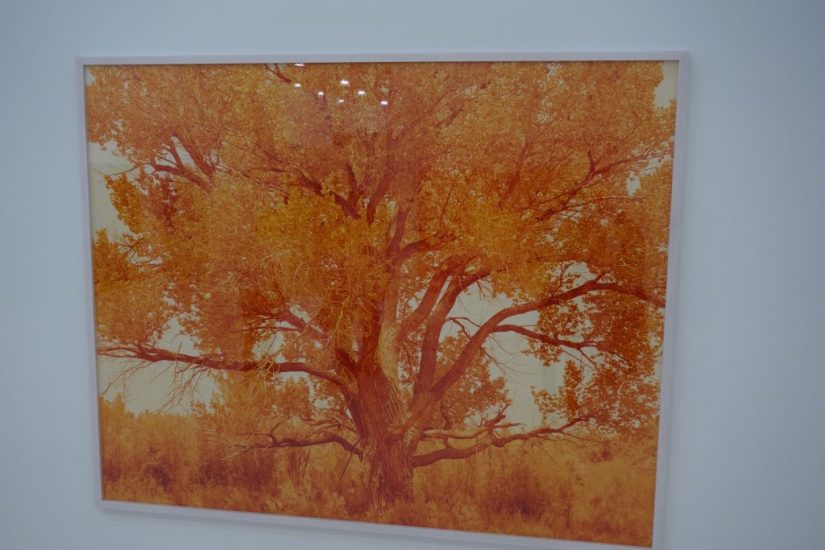 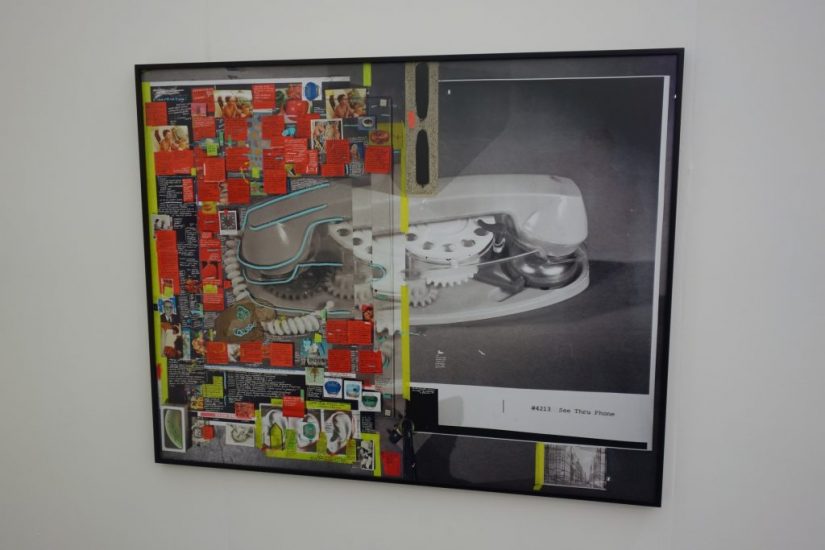 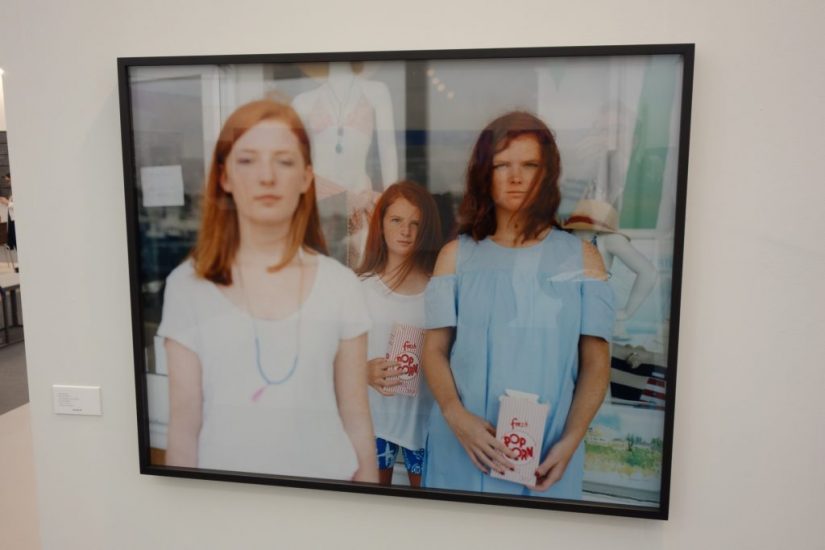 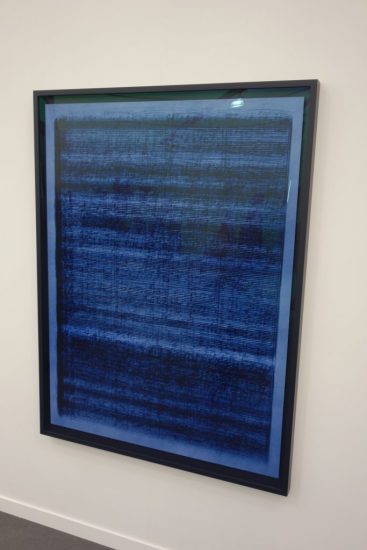 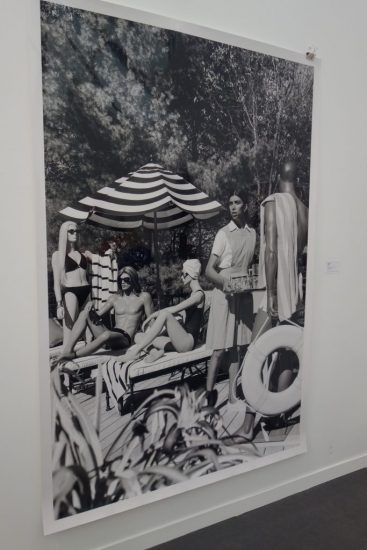 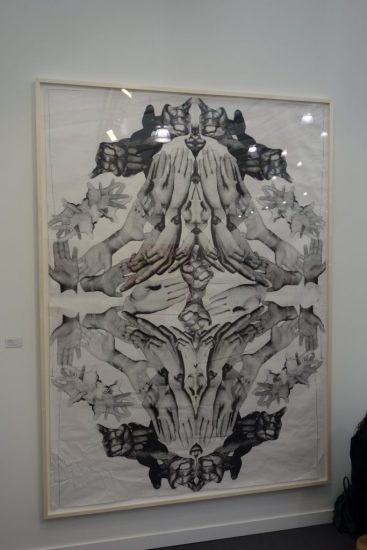 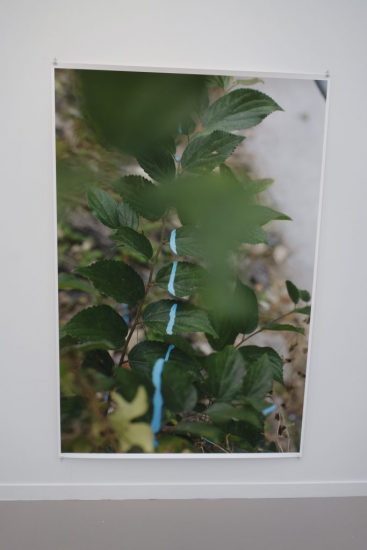 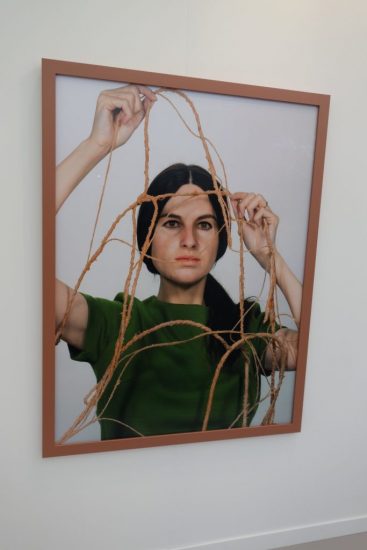 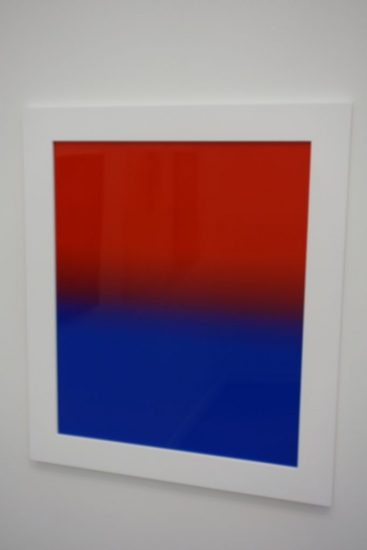 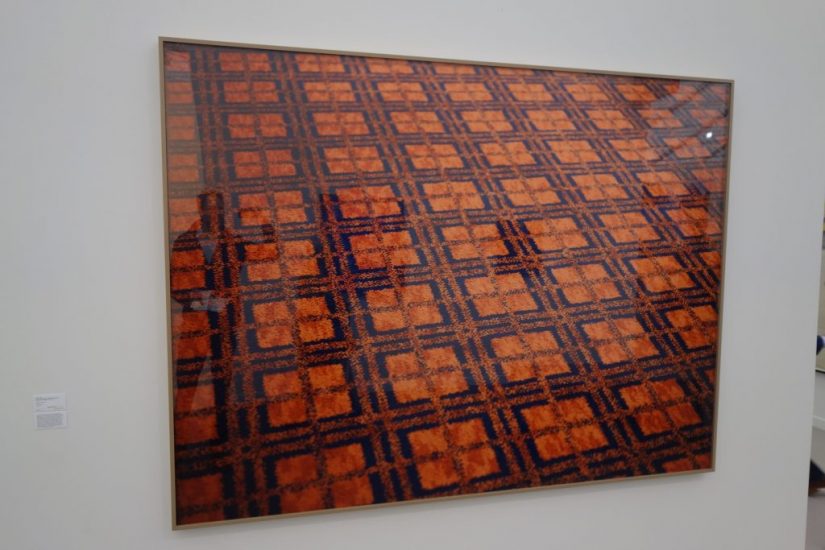 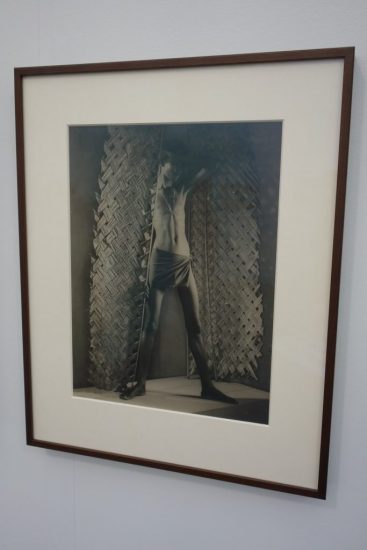 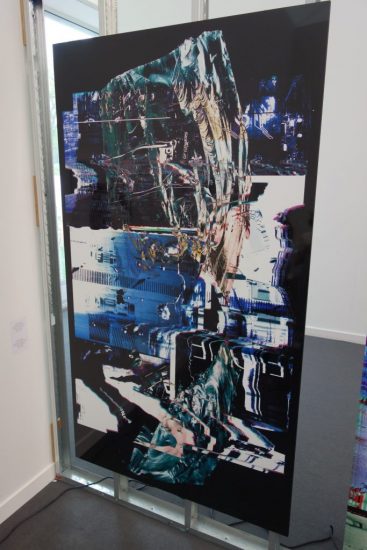 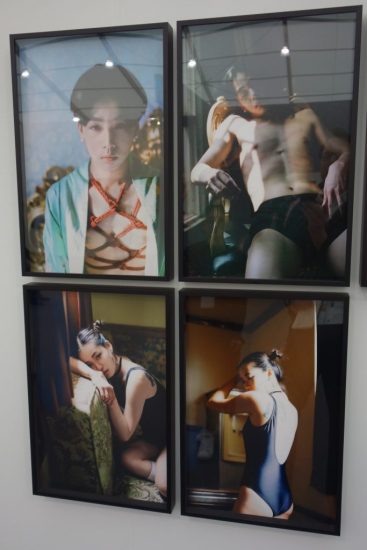 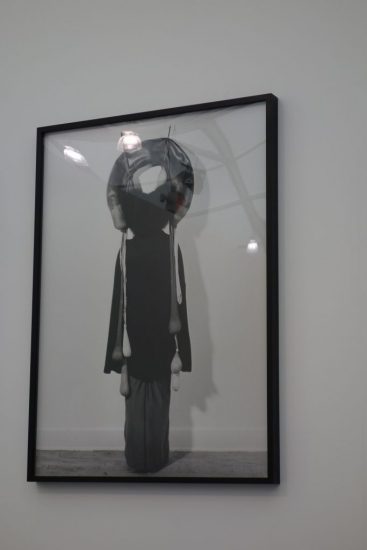 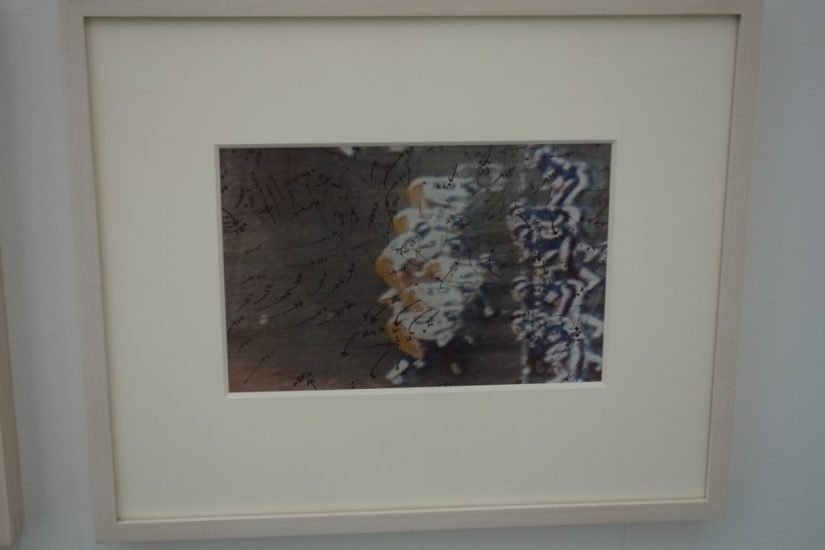 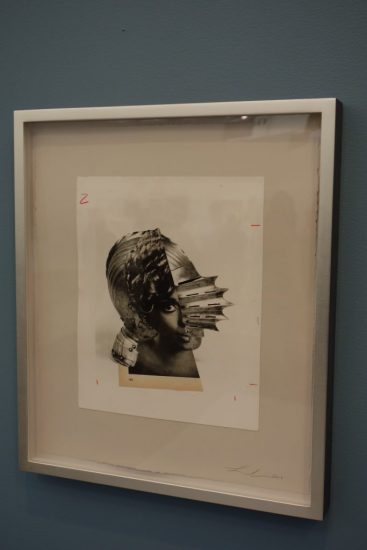 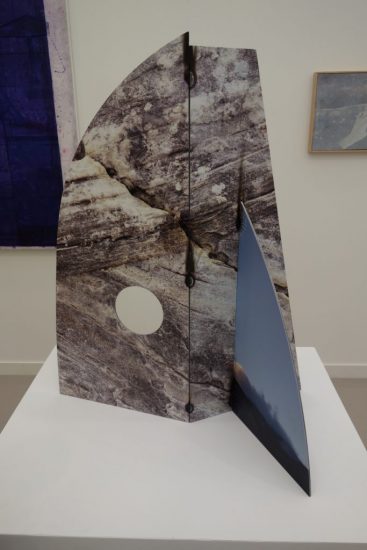 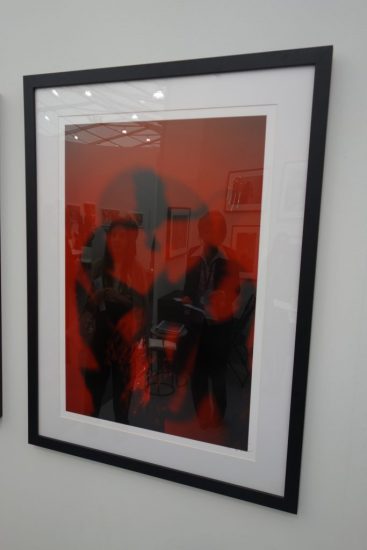 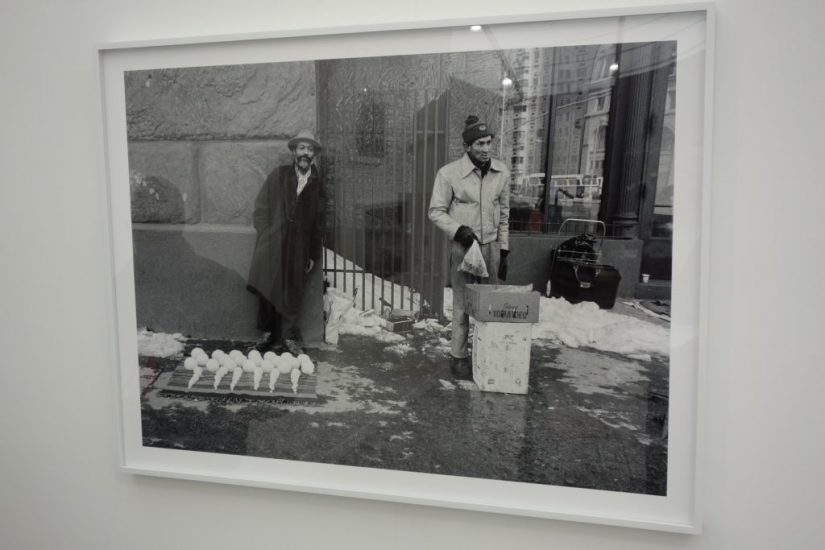 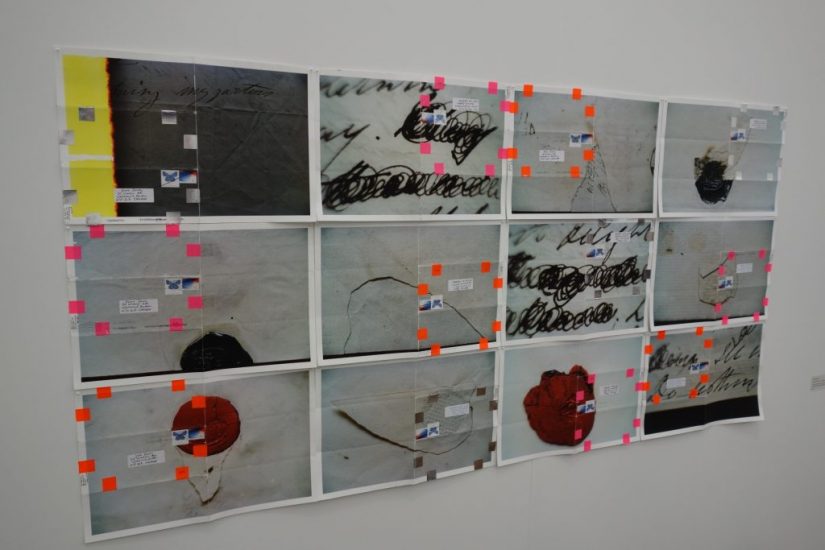 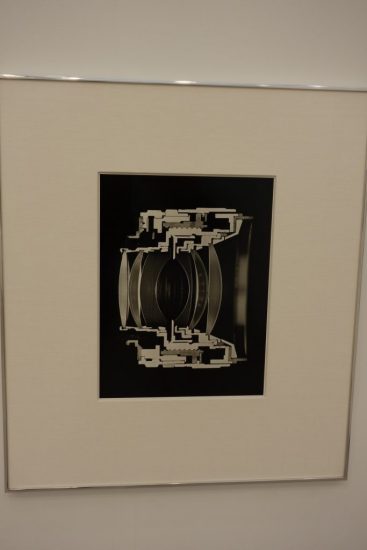 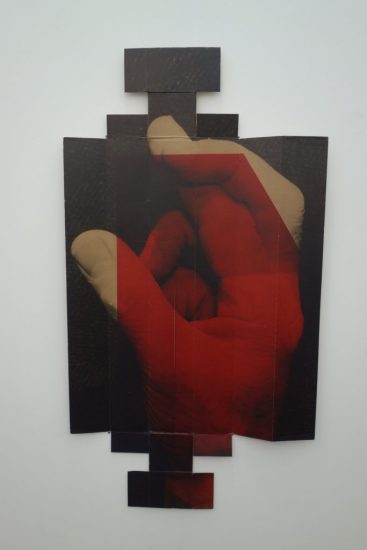 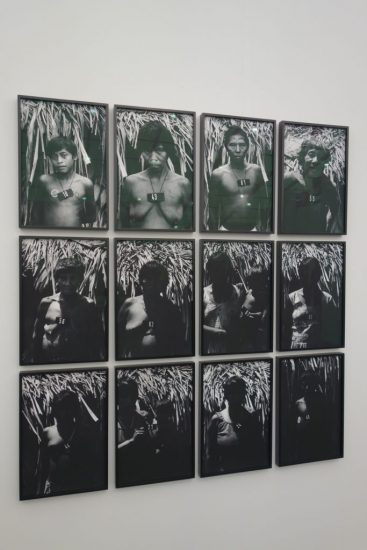 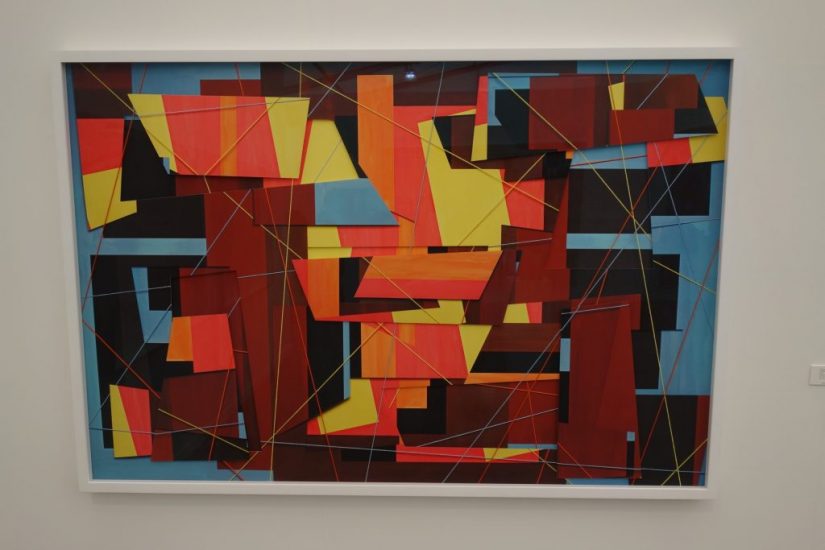 Parafin (here): Taken in anonymous corporate lobbies and hotel waiting areas in the early 1980s, Tim Head’s tinted images have been collaged into mirrored grids filled with futuristic emptiness. Dots of light echo from the ceiling like Morse code and incongruous ficus trees multiply in the shining vacancy. Priced at $16000.

Salon 94 (here): David Benjamin Sherry took this image of a majestic cottonwood tree in Bear Ears National Monument, an area preserved by Obama and then reduced by Trump. While the bark and leaves are filled with textural interest, the seething orange color seems to sound an environmental alarm, the centuries-old survivor under siege. Priced at $30000.

Foxy Production (here): An image of a see through telephone forms the basis of this layered new work by Sara Cwynar. The left side of the rephotographed composition is covered in Post-It notes with hand-written snippets of voices, conversations, ideas, and connections, with listening, hearing, and other auditory ephemera unpacked from multiple directions, smartly turning a stream of consciousness (or an improvised research project) into something visual. Priced at $12000.

Paul Kasmin Gallery (here): The careful placement of the focus in this image by Tina Barney is what makes it so smart. While a portrait of three redheaded sisters might usually center on the oldest sibling, Barney puts the focus in the back on the youngest girl, creating a progression from full blur, to partial blur, to crispness (and through decreasing physical sizes) as she moves our attention. Priced at $22000.

Sean Kelly Gallery (here): Idris Khan continues his investigation of sandwiched images in this recent work. Semi-transparent sheets from musical scores are piled on top of each other, creating a single collapsed composite that seems to echo with layers of rhythms, the soothing deep blue tint softening the results. Priced at £65000.

Ryan Lee Gallery (here): This booth was a solo presentation of Martine Gutierrez’ project Indigenous Woman (which we reviewed last year here). There is very little duplication between the original show and the selections for the fair, offering a chance to get deeper into the various series. This poolside scene is particularly eerie and unsettling, the setup with the artist serving a group of swimsuited mannequins upending the usual tropes of glamour. Priced at $25850.

Night Gallery (here): This Xeroxed collage by Kandis Williams was a notable introduction (for me) at this year’s fair. Using the disembodied hand gestures of civil rights activists and church leaders, Williams creates a flowing kaleidoscopic wave of emphatic motion. The mirrored effect gathers the commanding movements into a swirl of exhortation. Priced at $16000 and already sold.

Maureen Paley (here): This print by Wolfgang Tillmans reminded me of the work of John Pfahl. A drip of paint trickles across the leaves, bringing a loose intrusion of linear connection to the forest. Priced at $95000.

Maureen Paley (here): Gillian Wearing inhabits the form of Eva Hesse in this new work. Her eyes peek out from behind the convincing mask, creating an uneasy mix of identities, while the waxed ropes add an elegantly rustic tangle of artistic veiling. Priced at $35000.

Maureen Paley (here): James Welling seems to be heading toward the work of Cory Arcangel in this recent digital gradient. The colors dissolve into each other, creating the hovering appearance of receding space. Priced at $25000.

David Nolan Gallery (here): This photograph by David Hartt captures the bold patterns of wall to wall office carpeting. The image gains further resonance with additional context – it’s the carpet at the Johnson Publishing Company, publishers of Jet and Ebony magazines, and the offices are housed in a building designed by John Moutoussamy, one of the first towers built by an African-American architect in Chicago. With the help of that backstory, the image is transformed, the history seeming to rise up out of the repeating squares. Priced at $16000.

Jhaveri Contemporary (here): This 1930s portrait by the Sri Lankan photographer Lionel Wendt forces us to recalibrate our thinking about the history of the male photographic nude. Set between the textural panels of a woven fan, the staged body exudes a sensual burnished shine. There is a stylistic parallel to the classical work of George Platt Lynes, but with a man of color as the subject and a particular Indian sensibility. Priced at $15000.

Lyles & King (here): This recent work by Chris Dorland extends the aesthetic themes he has been exploring in the last few years, deeping the distortions taking place. Vaguely recognizable technologies break down into seductive squiggled noise, the digital smears overlapped to the point of bold confusion. Priced at $12500.

Chi-Wen Gallery (here): The underbelly of Chinese youth culture continues to produce young photographers trying to break free from the environment of control. Su Misu’s images explore sexuality, gender roles, and even bondage (in this case male), pushing on the invisible constraints of cultural identity. Priced at $2500 each.

Thomas Erben Gallery (here)/Lévy Gorvy (here)/Sprüth Magers (here): In this performative work from 1977, Senga Nengudi inhabits one of her own sculptures, standing inside its dangling nylon forms. Her physical presence creates depth in the work, accenting its elongated fluidity. Priced at $30000 and already sold.

Alexander Gray Associates (here)/Garth Greenan Gallery (here): Perplexing mathematical symbols and notations cover video imagery of a football game in this cerebral mid 1970s work by Howardena Pindell. Using acetate sheets that she drew on, and then placed over the TV screen and photographed, the uncorrelated markings hint at the unknowable systems, rules, and processes that govern everyday events. Priced at $18000.

Hauser & Wirth (here): This recent collage by Lorna Simpson pairs a woman’s face with an armored helmet with a jagged faceplate. The unlikely combination thoughtfully intermingles issues of gender, strength, and power. Priced at $20000 and already sold.

GRIMM Gallery (here): This new work by Letha Wilson finds her pushing further into sculptural three dimensionality. Welded steel plates covered with imagery of rock faces and an evening sky interlock with structural precision, mixing hard and soft within a spatial framework of abstract geometry. Priced at $18000 and already sold.

Jenkins Johnson Gallery (here): This booth was a solo show of the photography of Ming Smith. This early 1980s image turns a jazz player into a electric swirl of movement, washed in flares and shadows of enveloping red. Priced at $31500 (modern print).

Rena Bransten Gallery (here)/Stephen Daiter Gallery (here): This photograph by Dawoud Bey documents an urban performance by the conceptual artist David Hammons. After a blizzard, Hammons sells perfect snowballs on the sidewalk, creating playfully intelligent art out of the overlooked and the ephemeral. Already sold out.

Experimenter (here): Moyra Davey continues to make innovative, language-centered works sent through the mail. This new project collects up-close images (wax seals, paper fragments, and fragile snippets of texts) from letters by the Romantic poet Percy Shelley. Decorated by neon tape used to close the folded prints, the work has a tactile intimacy informed by the long distance process of transporting a letter. Priced at $35000.

David Zwirner (here): This booth includes a selection of new works by Christopher Williams, interrupted by one of his signature wall fragments. This image continues his interest in the abstraction of camera cutaways, the top-down view of the layered lenses and metal housing creating a progression of interlocked lines. Priced at $65000.

Goodman Gallery (here): This work is drawn from a recent project by the duo of Broomberg & Chanarin where each artist selected separate imagery in response to choices by the other, the paired pictures printed together on unfolded cardboard boxes. The dialogue here mixes a crossed fingers hand signal with a hard edged red box, the cardboard itself adding a refrain of rectangular edges. Priced at $21000.

Galeria Vermelho (here): Taken in the early 1980s, these images of Yanomami indians in Brazil document individuals who had been vaccinated as part of a government program. But Claudia Andujar’s powerful work turns that process into a visual meditation on their disappearance, the numbers hung around their necks like clinical labels or categories and the darkness slowly engulfing them until they vanish into the blackness. Priced at $50000 for the set.

Sikkema Jenkins & Co (here): This recent work by Vik Muniz continues his exploration of photographic illusionism and the dichotomy of image and object. Painted panels and colored strings are arranged in an abstract composition, which is then rephotographed and cut into layers, the confusion and misalignment of the pieces, along with the physical versus printed image trickery, creating a playfully vibrant interchange. Priced at $60000.