For photography collectors like us, broad-based contemporary art fairs like the Armory Show in New York provide a special kind of art experience. While single subject photography fairs offer a relatively continuous flow, where each and every booth has photography on offer to explore, visiting the Armory is something more like heading out on an exciting treasure hunt, where the action happens in bursts and flashes in between longer stretches of relative quiet.

If photography is your thing, it’s entirely possible to wander for half a dozen or even a dozen booths at the Armory without seeing any photographs of interest, only to come across something new and innovative around the next corner or behind the next booth wall. So there is a distinct process of constant surface scanning that becomes the default mode of seeing, with a pattern matching lock-in effect occurring when a photographic target worthy of further attention emerges.

In principle, this year’s fair was essentially no different than previous iterations of this same search journey, but that isn’t necessarily a negative conclusion – the structure is the same, with the installed artworks changing each year. The more important measure quantifies just how much exciting photography there was to be unearthed, and as the images below attest (28 this year), there was plenty to keep me thinking, and at least as much of photographic note to be found as in earlier years.

This slideshow of photographic highlights covers what caught my eye in the various booths on both Pier 94 and Pier 92, with a tilt toward recently produced works. The individual images are accompanied by description and analysis, along with linked gallery names, artist/photographer names, and prices where appropriate, to facilitate easy follow up. 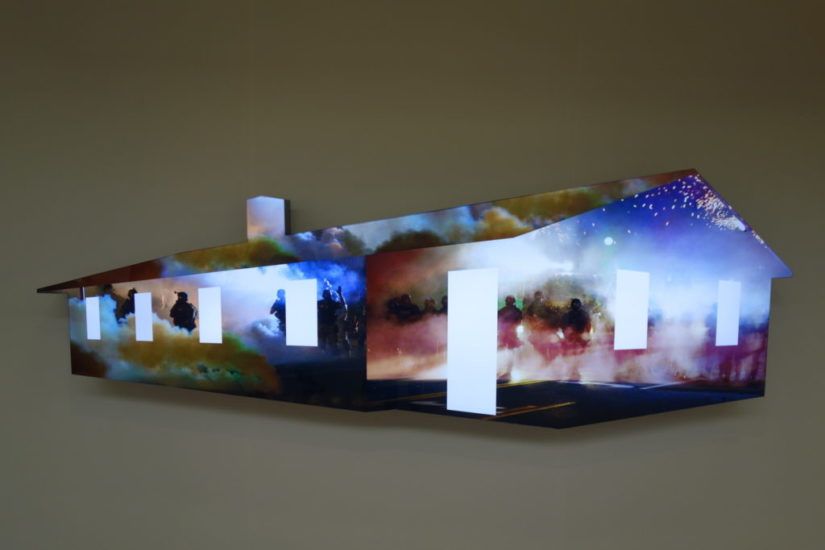 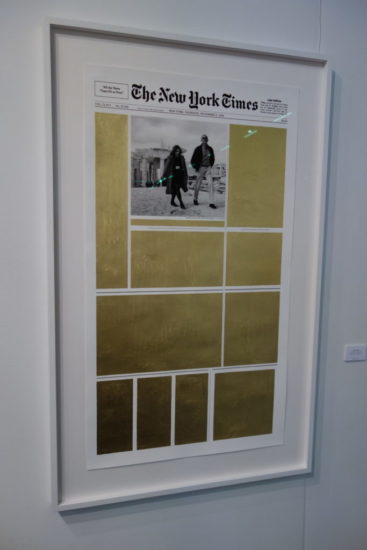 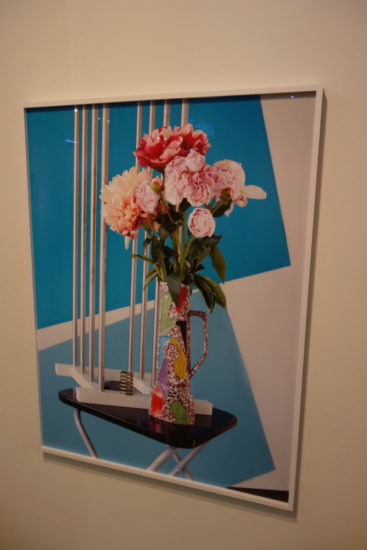 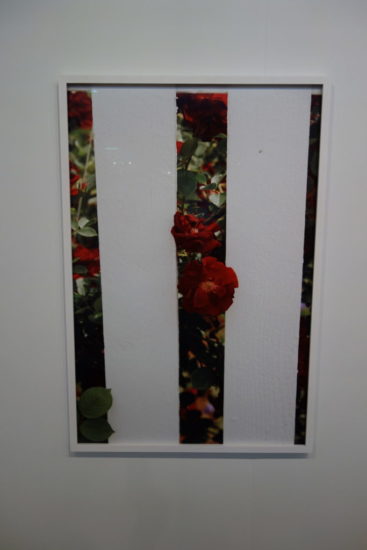 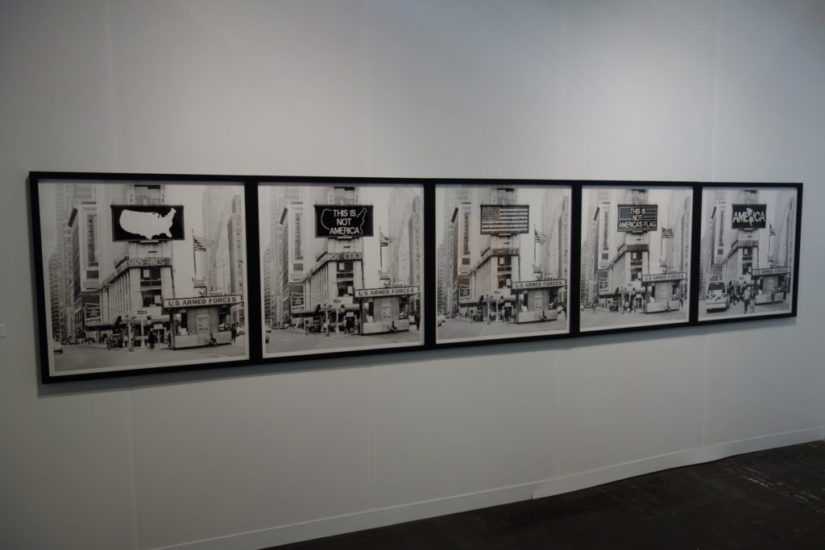 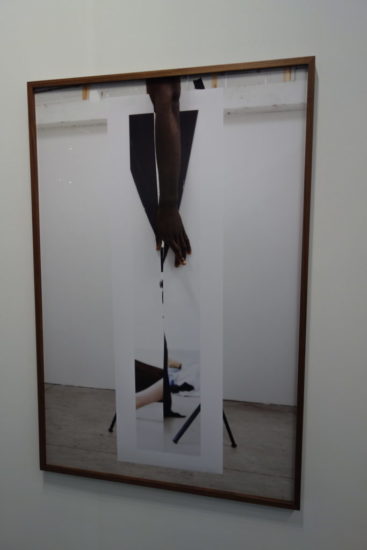 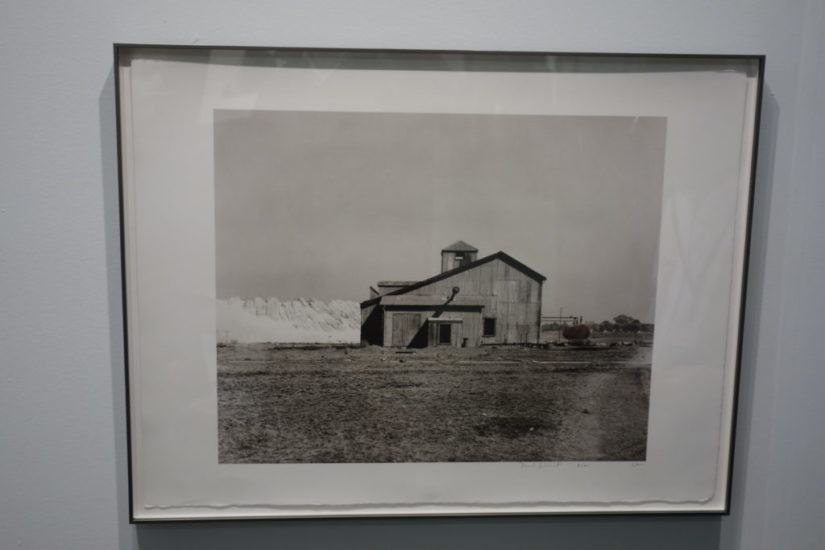 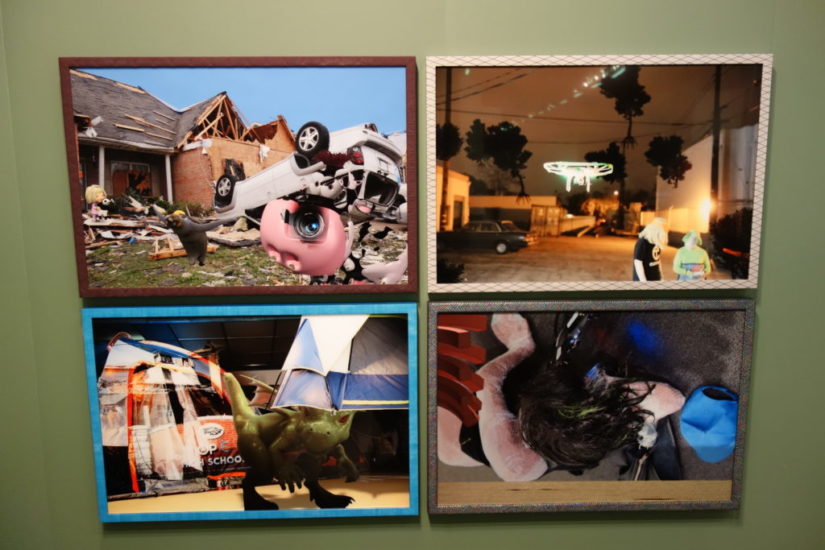 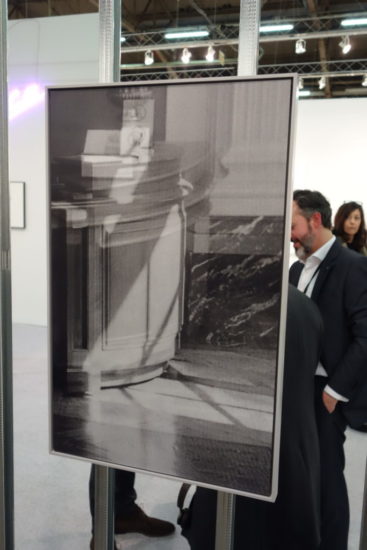 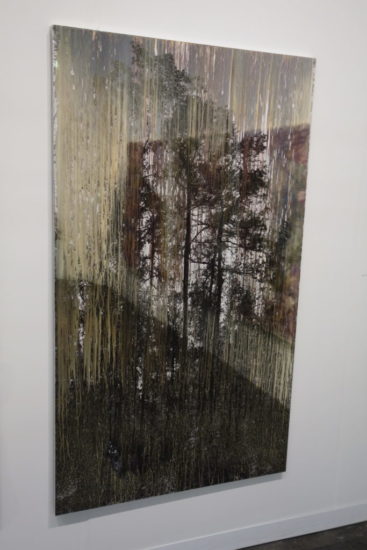 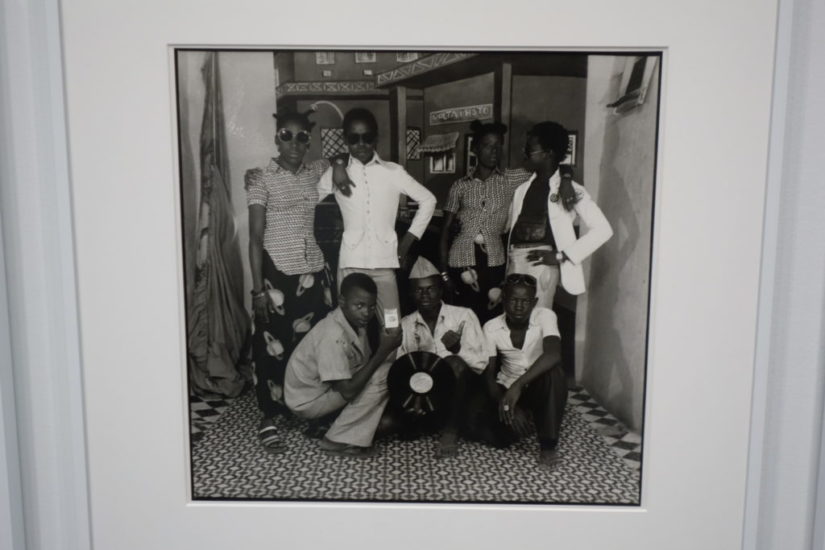 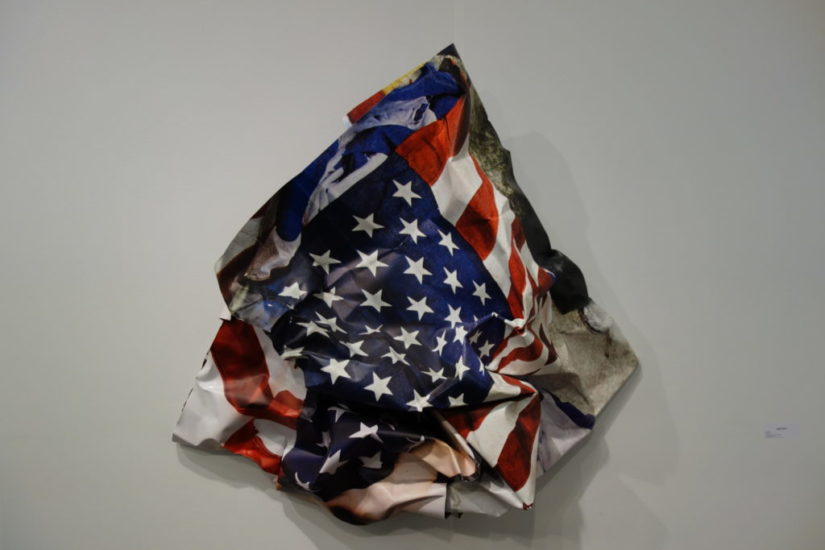 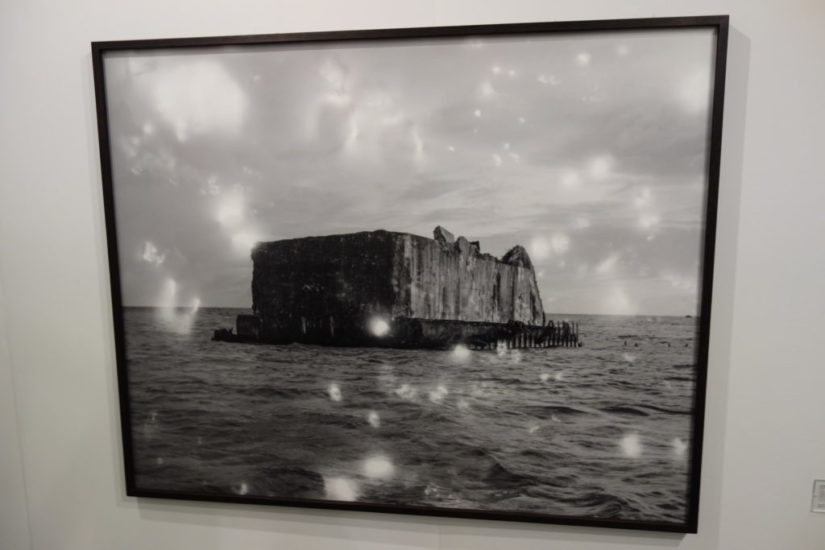 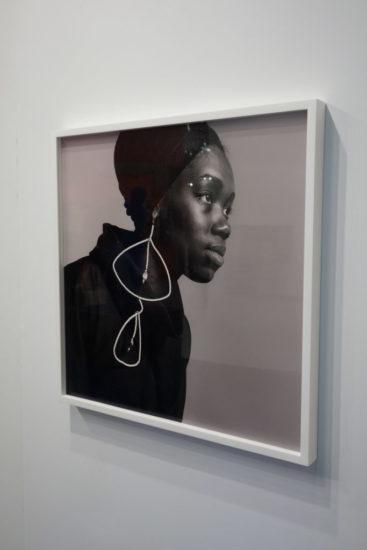 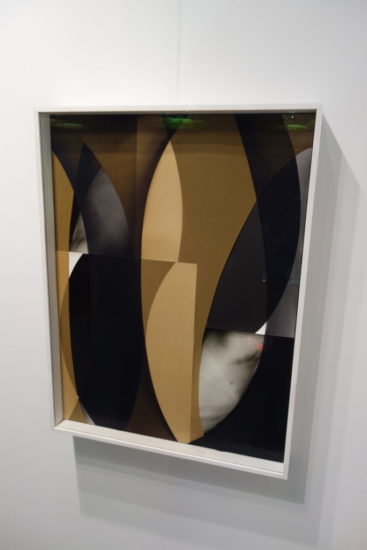 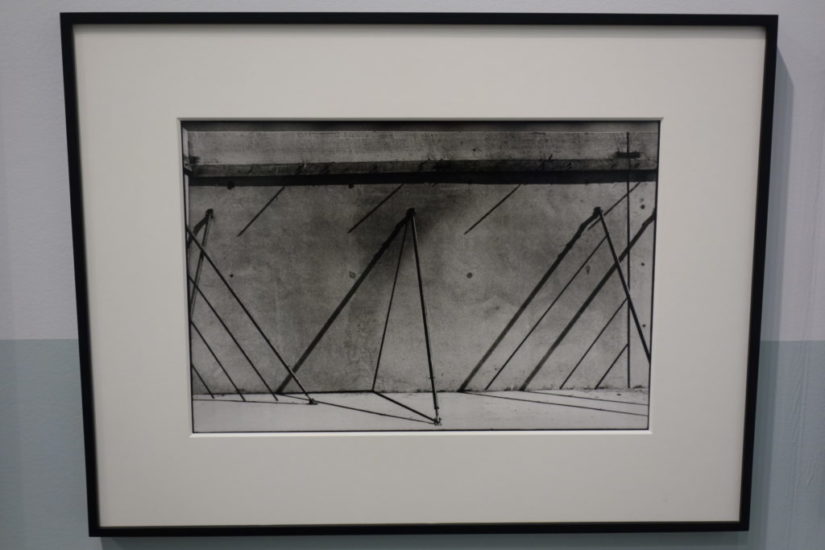 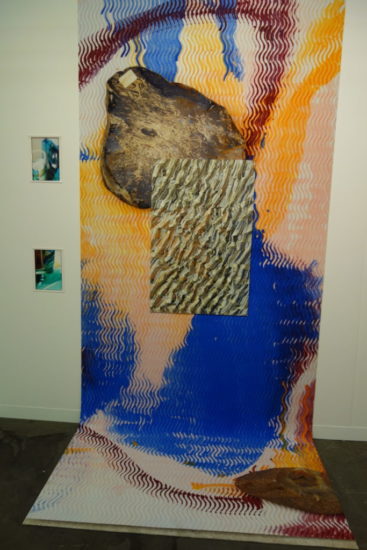 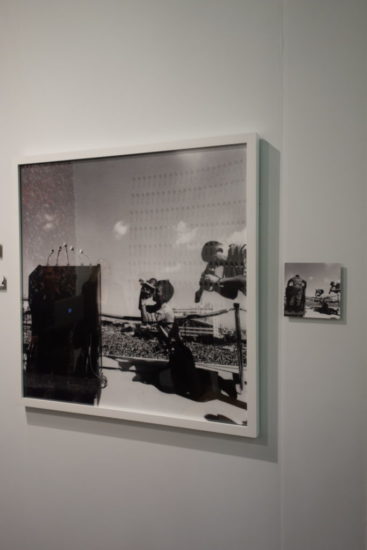 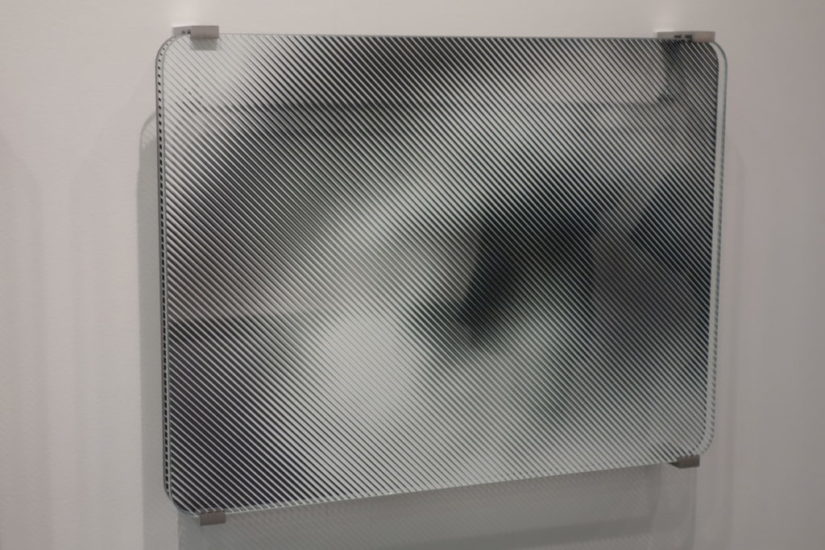 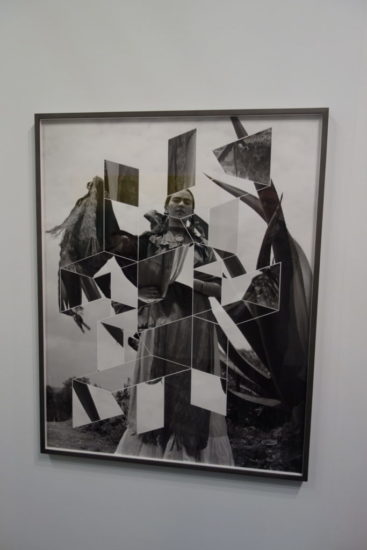 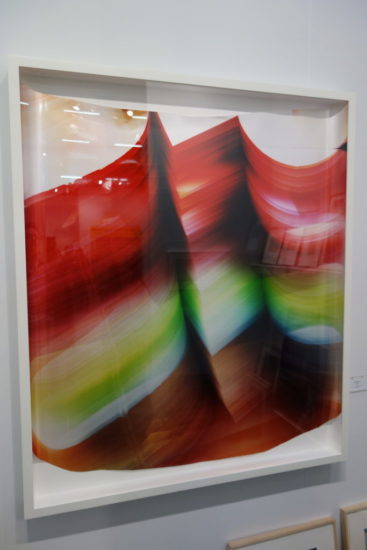 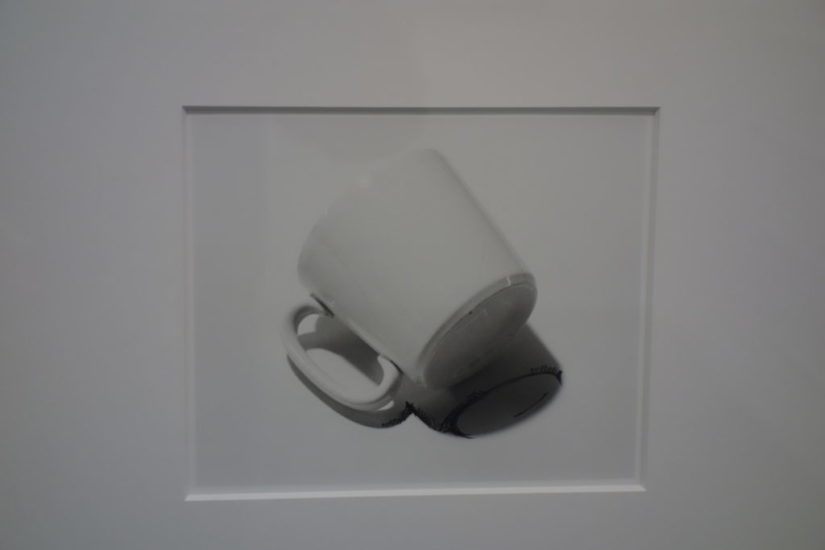 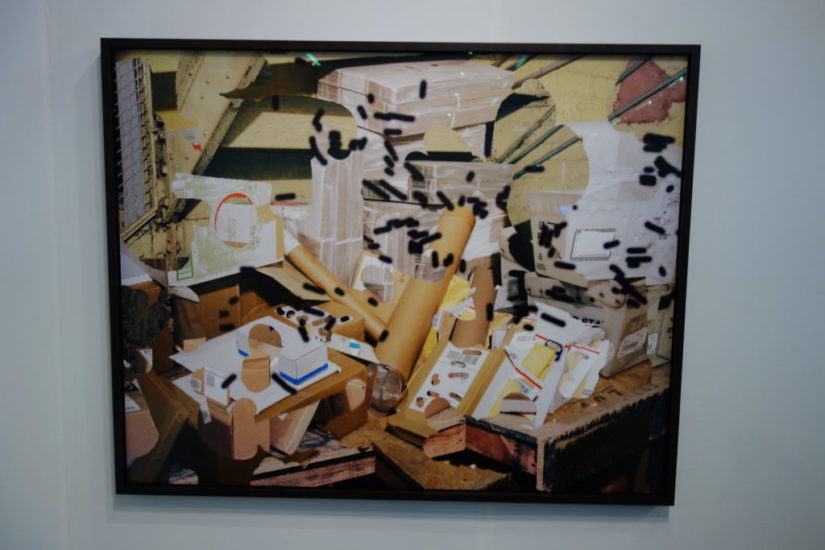 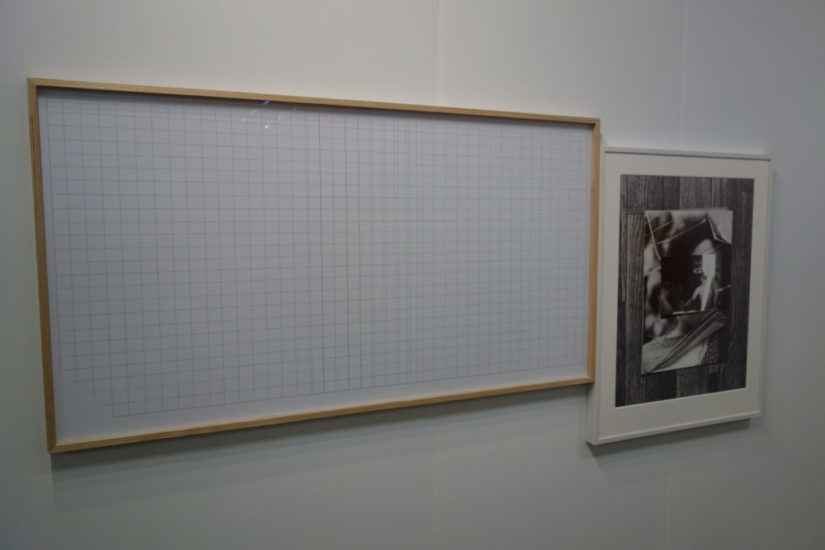 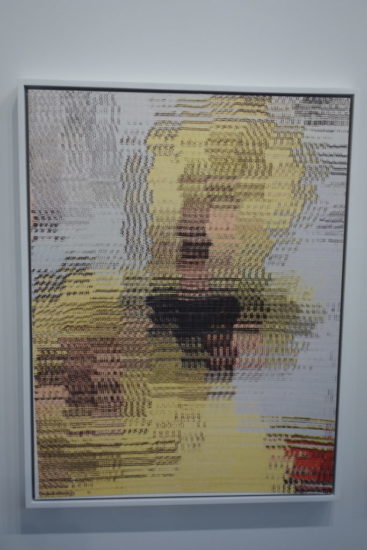 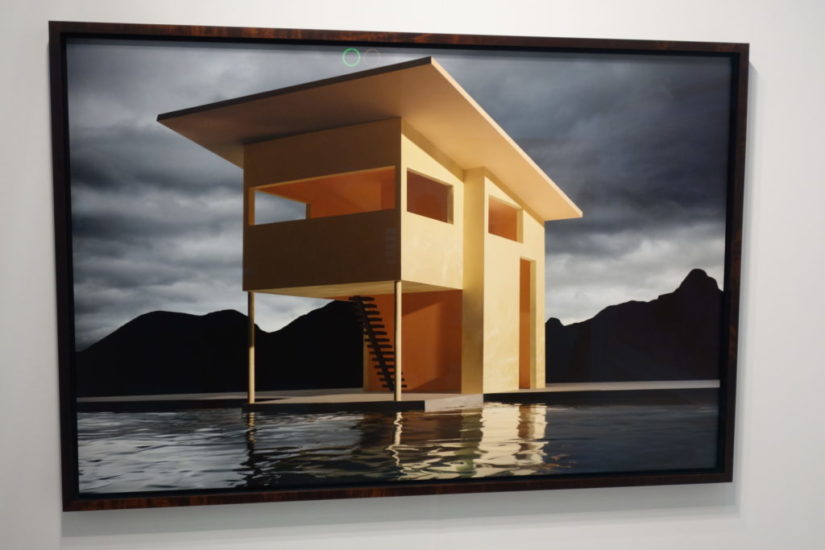 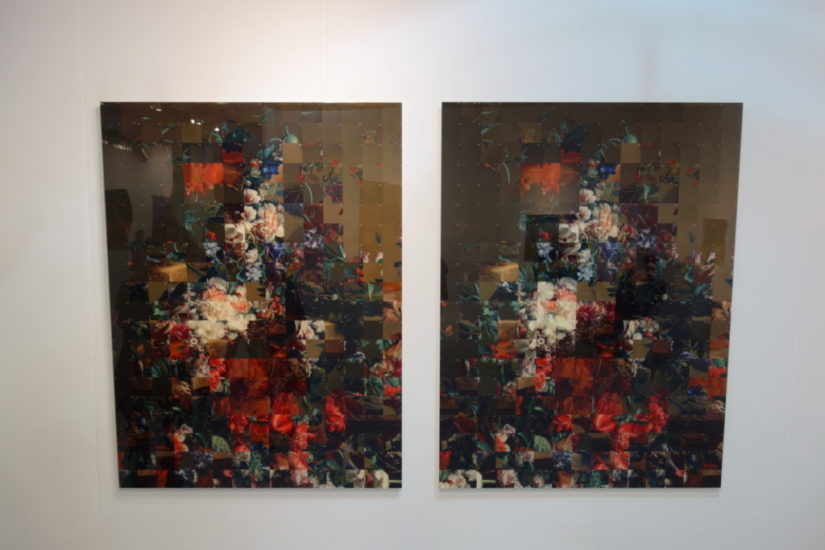 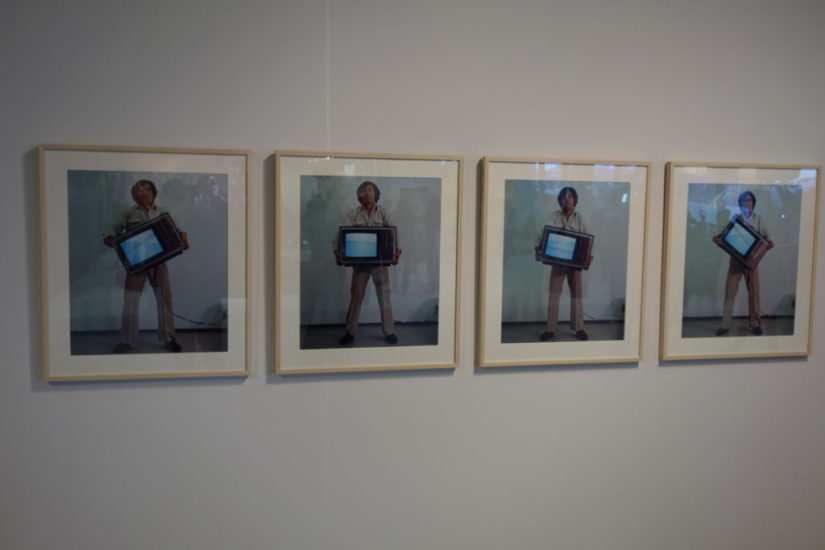 Victoria Miro (here): This lightbox by Doug Aitken places nighttime images of riot police and clouds of colored tear gas inside the stylized silhouette of a ranch house similar to the one where Michael Brown lived in Ferguson, Missouri. The combination makes the invasiveness of the police presence a physical reality, their imposing forms found right in the living room. Priced at $200000.

Kalfayan Galleries (here): Many of Panos Tsagaris’ first newspaper works were aimed at the Greek crisis, and while this gold-blocked image does contain a view of Athens, it steps beyond that national issue into a broader global realm. The news of the day becomes a gilded geometric abstraction, each story an opaque piece of a larger puzzle. Priced at $9000.

Andrew Kreps Gallery (here): This new work by Annette Kelm combines a handmade vase of flowers with a mysterious spring-like mechanism. The contrasts of natural and machined textures and forms give the composition its vitality. Priced at $18500.

Andrew Kreps Gallery (here): This recent image by Roe Ethridge offers the banality of roses behind a fence, but those two white slats somehow become the dominant visual force in the picture, pitting the expressiveness of the roses against the blankness of the fence and creating an unresolved off-kilter resonance. Priced at $22000.

Galerie Lelong (here): Alfredo Jaar’s Times Square intervention entitled “A Logo for America” took place in 1987, but it still feels entirely fresh and relevant. A short animation ran on the huge screen above the military recruiting station, the juxtaposition creating smartly dissonant friction. A set of 5 modern prints, priced at $180000.

Yancey Richardson (here): Paul Mpagi Sepuya’s work continues to get more compositionally complex, with multiple layers of mirroring and rephotography interrupting our normal understanding of photographic space. Here paper prints tussle with a hanging arm and the studio background, creating an uncertain mix of depths and textures. Priced at $9000.

Goodman Gallery (here): While this mid-1960s image of mining houses by David Goldblatt was probably excellent in its original gelatin silver incarnation, this platinum print (made as part of a selection of 29 reprinted images from across the artist’s career) highlights its subtle tonalities and textures. The white salt piles and the weathered wooden slats are richly tactile, with the sky and the foreground grass stubble filling out the contrasts. Priced at $22000.

Regen Projects (here): Ryan Trecartin’s digital interruptions amplify the strangeness in his video stills and snapshots. Hovering trees, the eye of a camera, a camping tent, and an array of curved bars are just a few off the oddball additions, making each scene a hyper-kinetic jumble of the real and the random. The set of 4 prints priced at $45000.

Galerie Thomas Schulte (here): This lenticular image combines a picture Julian Irlinger took at the Frick with a similar view made by the Google Art Project cameras. The two layer image shifts back and forth between the human and computer vision, the counter at the Frick stuttering with light and shadow. $3750.

Praz-Delavallade (here): This image of towering trees by Matthew Brandt has been overlaid with watery silverplating. The dripping material creates elegantly shiny reflections like drooping moss. Priced at $28000.

Yossi Milo Gallery (here): The rediscovery of Sanlé Sory is an exciting event for African photography collectors. His studio portraits from 1960s and 1970s in Burkina Faso bear many of the stylistic hallmarks of Keïta and Sidibé, but with a distinctly jazzy style. Modern prints, priced at $6000.

Wentrup Gallery (here): This two sided sculptural work by Olaf Metzel is made from digital prints affixed to a single sheet of aluminum, which has then been crumpled and twisted into the final form. The flag imagery is particularly effective, the usual soaring billows replaced by crinkles of a less romantic sort. Priced at $52000.

Dittrich & Schlechtreim (here): This Julian Charrière image of a hulking concrete bunker near the the Bikini Atoll is decorated by tiny pinpricks of light. The glittery effect comes from radioactive sand (found on the local beaches there, left over from the WWII atomic testing) which was intermittently placed on the light sensitive paper, creating the bright interruptions. Priced at €16000.

Cherry and Martin (here): Kwame Brathwaite is a name we are likely to hear more about in the coming year or two. A founder of the Black is Beautiful movement in the 1960s, Brathwaite’s stylish fashion images of natural African-American women are poised for a timely rediscovery, with books and exhibitions in the works. Modern prints priced at $10000.

Gallery Taik Persons (here): The 1970s images of a Grey Crawford were a discovery for me. At first glance, they appear to follow along in a Lewis Baltz-style interest in stark architectural geometries, but a closer look reveals that some of the lines and forms are darkroom additions, pushing them towards more conceptual thinking and Fred Sandback-like sculptural interventions. Priced at €5000.

Arcade (here): This booth featured an all-over set of studio investigations by Peggy Franck. While some of the smaller images capture the found abstractions of studio fragments or rephotographed paintings, the large digital print on carpet hung over the booth wall gives rocks and painterly gestures a disorienting physical presence. Priced at $12000 for the carpet, $1400 for the smaller photographs.

El Apartmento (here): This work by Reynier Leyna Novo makes clever use of digital manipulation. Starting with an image of Fidel Castro giving a speech to a large assembled crowd, the artist has quietly removed the dictator, leaving behind an empty space surrounded by attentive reporters. The simple gesture creates a surreal scene, with the powerful implications of transforming an authoritarian regime. Priced at $10000.

Deitch Projects (here): This booth was a multi-faceted meditation on migrants and immigrants by JR. Close up images of eyes turn out to be paired pieces of etched glass (one white, one black), the layering of the two creating the photographic appearance. Priced at $22000.

Hales Gallery (here): This work by Andrea Geyer turns Frida Kahlo into a shifting mosaic of cut pieces. Rooted in the idea of reconstructing feminist identity, Geyer looks back at female artists, using photography as a mechanism for reinterpretation. Priced at $11000.

Mor Charpentier (here): Many of Liliana Porter’s best works come from small but elegantly smart conceptual/optical twists, and this coffee cup from 1973, with its hand drawn shadowing, continues this pattern. Priced at $15000.

Galerie Eva Presenhuber (here): This excellent new work from Lucas Blalock combines many of his most effective visual manipulations. Digital erasures, spray paint like gestures, and mismatched image layering combine to turn this mail room scene into a maelstrom of quivering action. Priced at $20000.

Perrotin (here): Leslie Hewitt’s recent works introduce paired images, putting together black and white compositions (similar to the piled works we have seen from her in the past) with flat blocks of color and graph paper grids. The combination in this work is more subtle and brainy than it appears, with the grid actually made up of two overlapping sets of lines and a peeled back corner, that erasure echoed by the folded magazine corners in the layered pile of imagery. The textures and patterns are equally dense, with the scratches of the wood grain interacting with the magazine pages. Priced at $20000.

Sicardi Ayers Bacino (here): John Sparagana’s works start with scans of comic book imagery, but soon dissolve into indeterminate abstraction. Separate image scans are cut into tiny strips and squares and merged together into one complete work, the colors shifting, blurring, and refusing to coalesce. Priced at $10000.

Sean Kelly Gallery (here): This brand new work by James Casebere doesn’t come from any current or new series, but follows along in his exploration of pared down architectural forms. This yellow model is moodily elemental, the dark hills adding an ominous touch to the jaunty color. Priced at $50000.

Leila Heller Gallery (here): Rashid Rana’s floral diptych is like a digital jigsaw puzzle. Each numbered block recreates part of the composition, the two images showing us different arrangements of the image fragments. The effect is akin to a breaking down process, where we are forced to look more closely at how one scene might lead to many. Priced at $70000 for the pair.

Gallery Hyundai (here): This late 1970s set of images from Korean video artist Hyun-Ki Park turns TV sets filled with water into performative partners. As the TV is rotated, the horizon line of water shifts, creating a progressive set of angles. Modern prints, in a set of 4, priced at $8500.