Thunderous rain poured down last Friday, threatening to wash away the eager visitors to the first public day of this year’s Frieze New York Art Fair. But once past the gurgling walk from the ferry and inside the dry confines of the airy tent, it was largely business as usual, aside from the washes of deafening rumble coming from the water hitting the roof.

Amid the crowds of well dressed collectors and art lovers going about their business (and business it is, of course), I did see one unlikely out-of-place figure. Dressed in the military uniform and sunglasses of the con man from “Catch Me If You Can,” a Leonardo DiCaprio impersonator swooped by me, moving from seemingly looking at the works in a booth to rushing off somewhere else. It was certainly a surreal moment, and one that seemed oddly resonant in the context of this annual gathering – his overtly disguised presence seemed to lay bare the layers of misdirection and behavioral artifice going on all around me.

While the fair itself felt fuller than normal, with more small booths and solo presentations, photographically, this year’s Frieze was somewhat thinner than in previous years. Putting the usual smattering of art fair stalwarts like Sherman, Tillmans, and Mapplethorpe aside, and discounting the attention grabbing booth of large scale Serrano prints pitting portraits of Donald Trump and Snoop Dogg against each other, there was generally less photography of significance (either brand new or recently reconsidered) to be discovered. In prior years, we have needed 2, 3, and even 5 parts to cover everything we thought was worth discussing, but this year, we needed just one summary.

This report consists of image highlights shown in an annotated slideshow. For the most part, I have tried to avoid works that have recently been on view in New York gallery shows or that we have already reviewed in another context, but there are always a few duplicates, as galleries tend to show off their recent material. Gallery names/links are followed by the artist/photographer name, the price of the work, and some notes and comments as appropriate. The booths are loosely organized by my path through the fair, beginning at the North entrance. 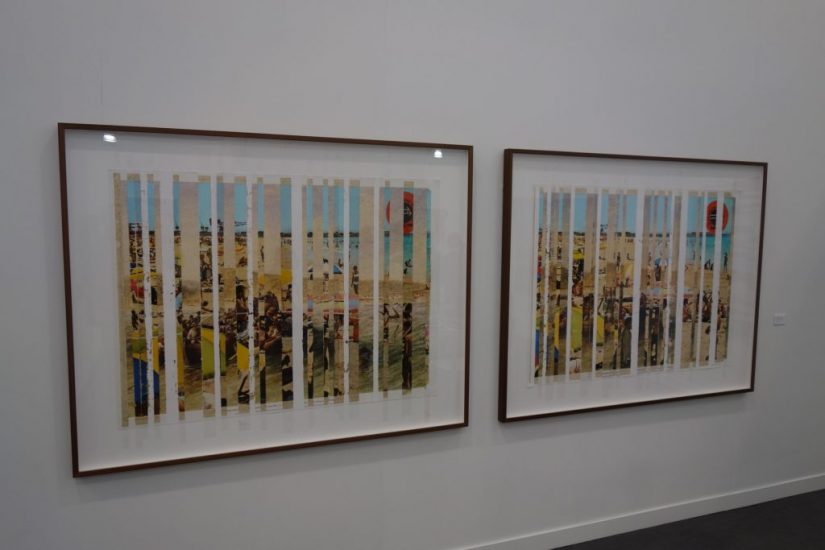 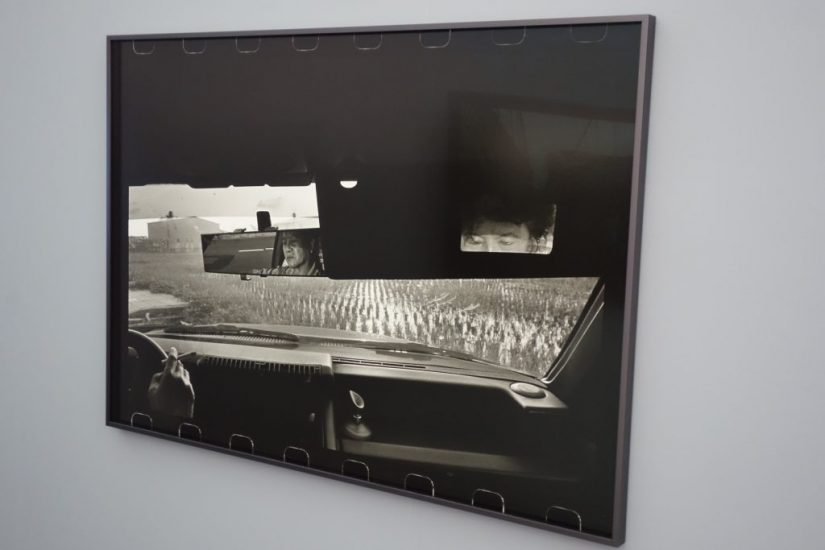 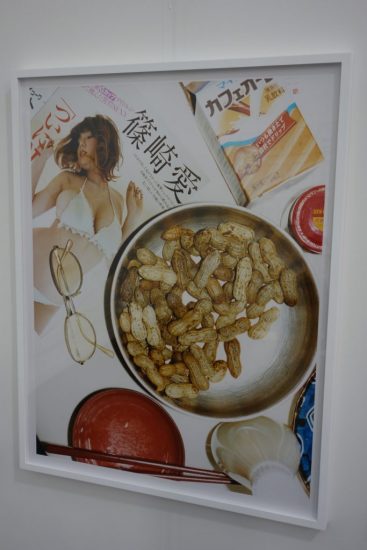 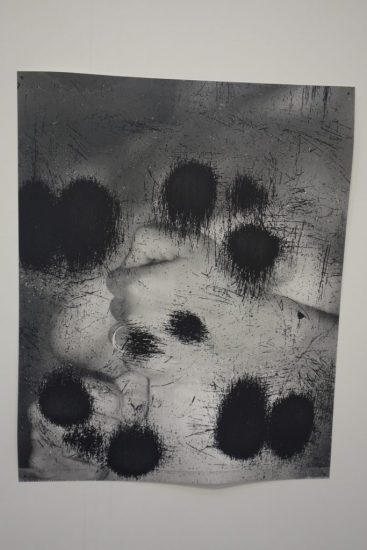 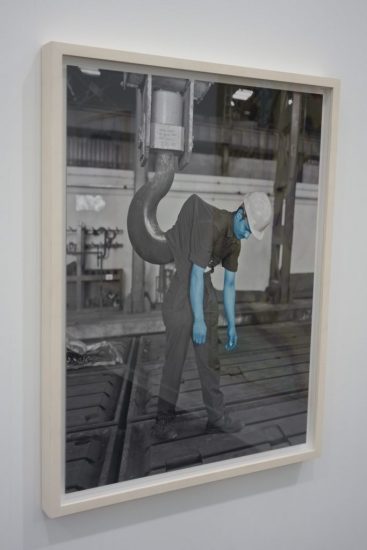 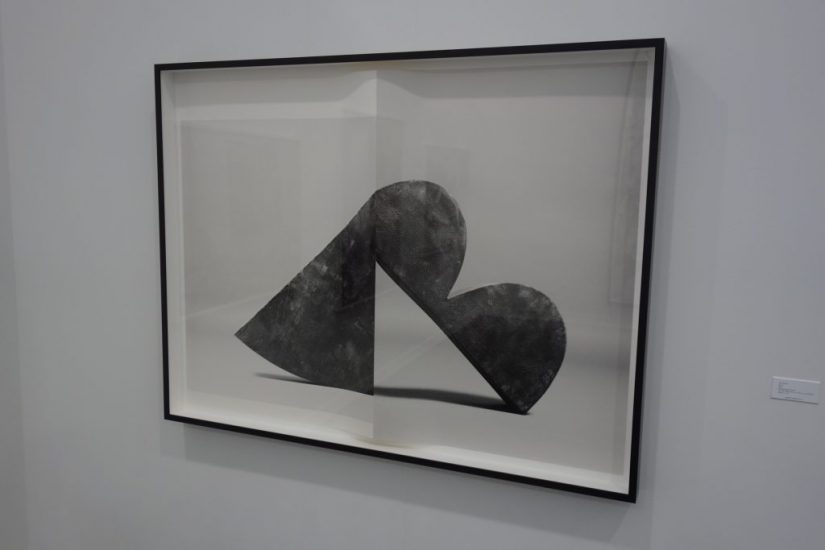 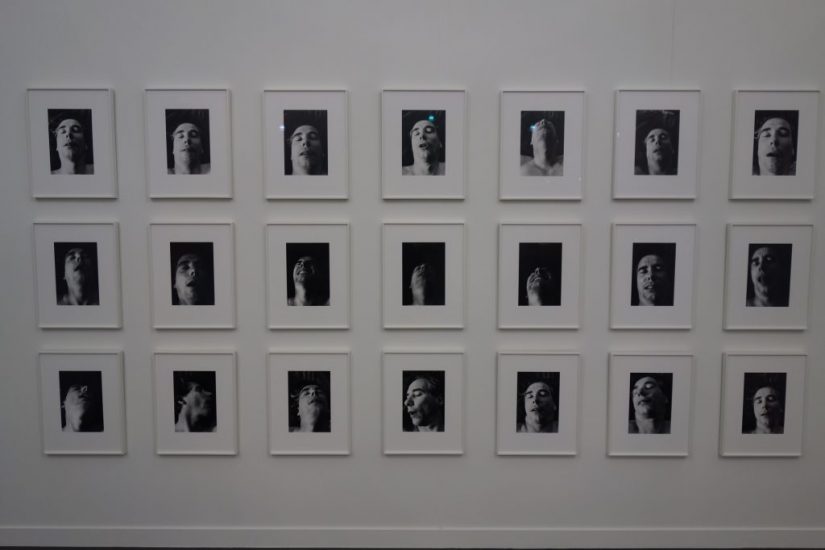 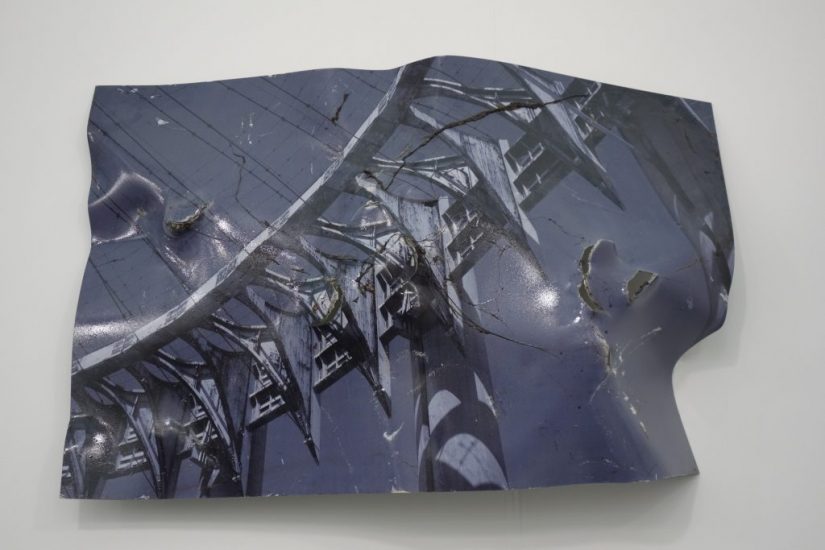 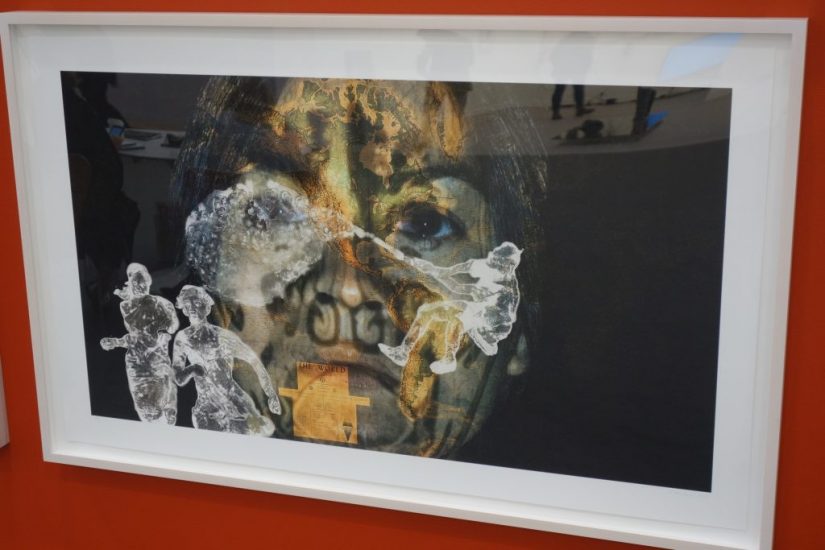 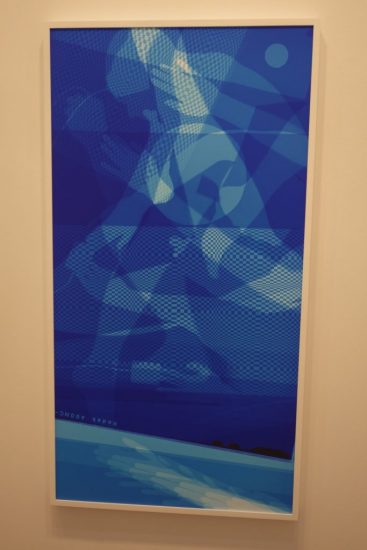 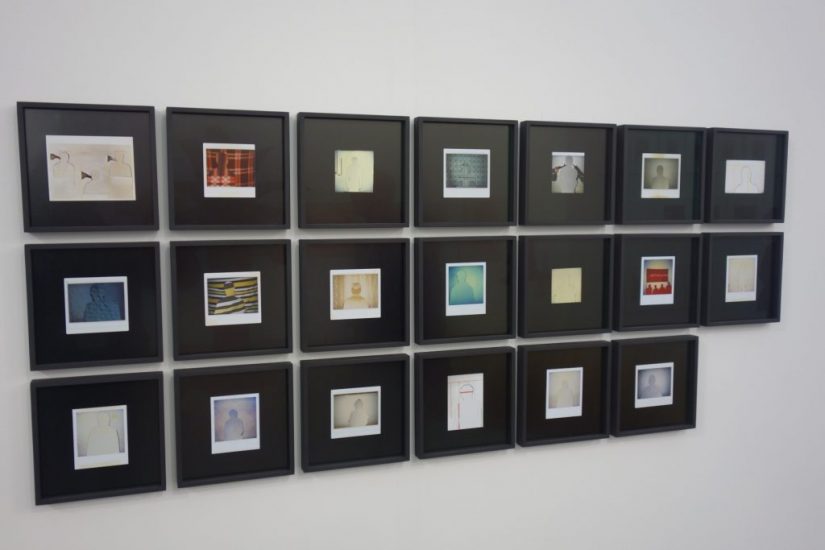 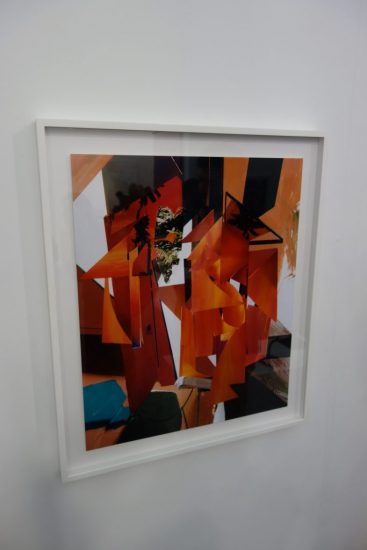 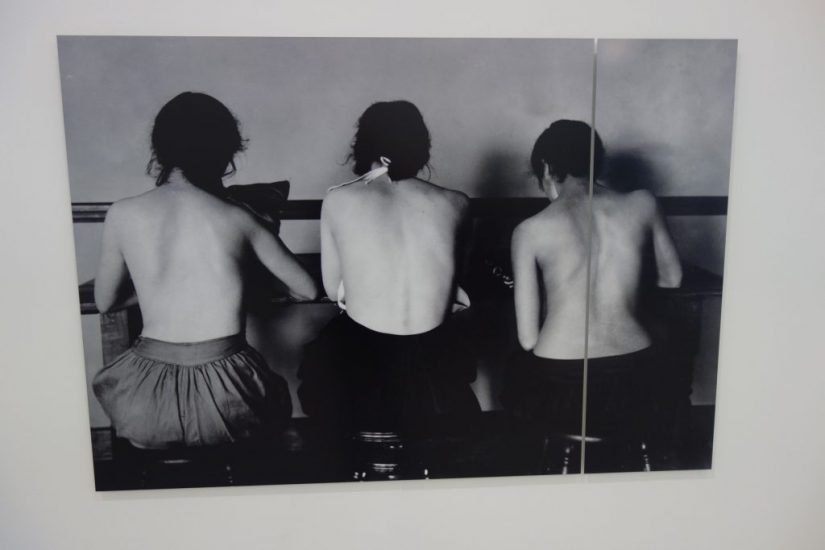 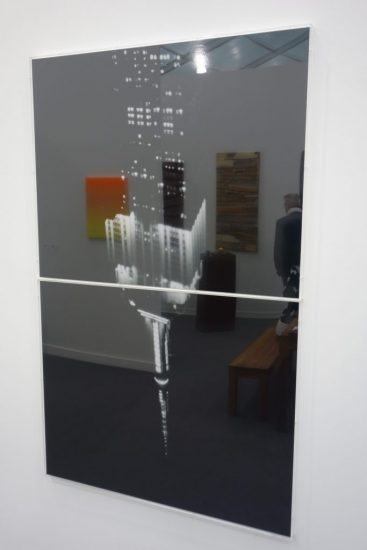 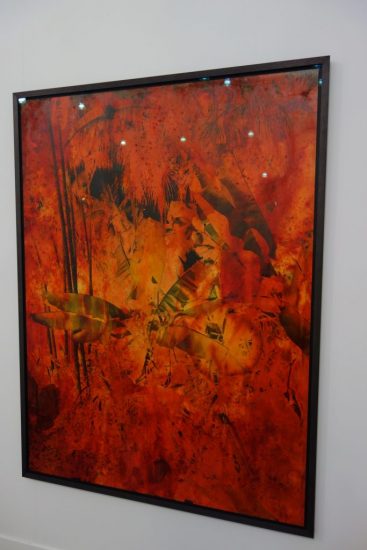 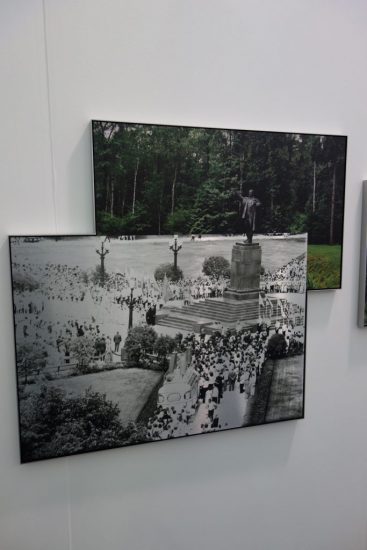 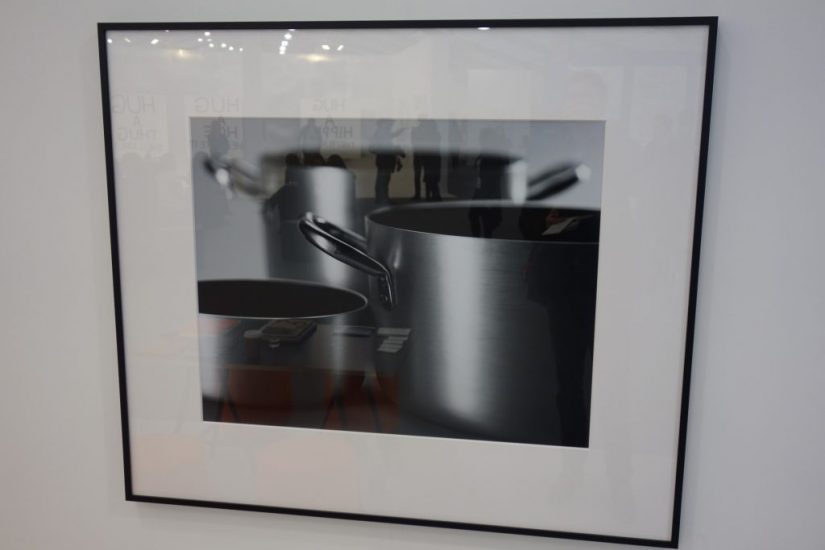 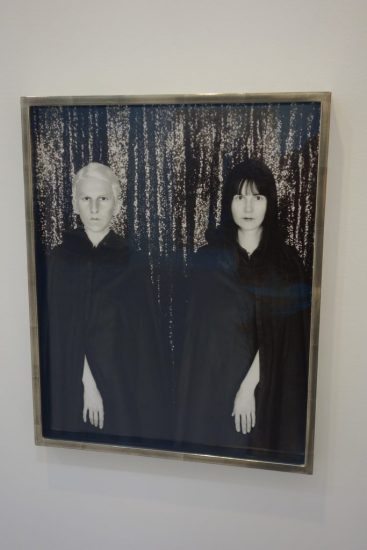 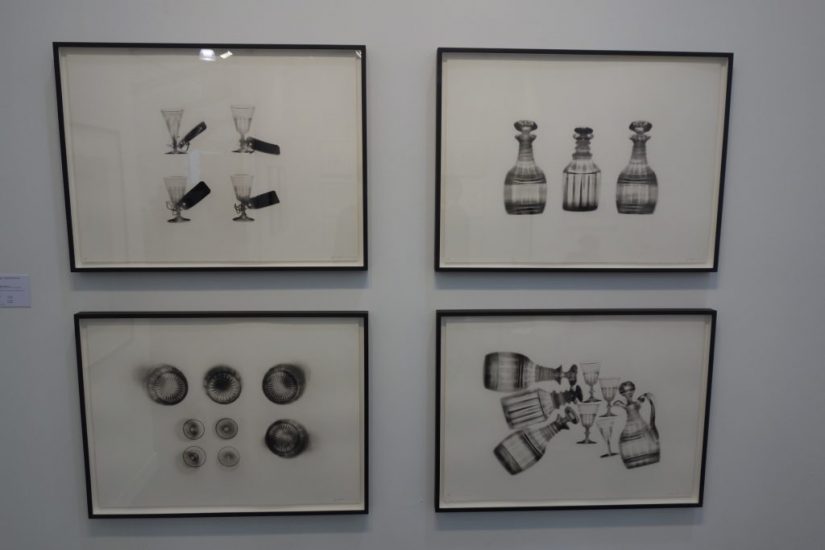 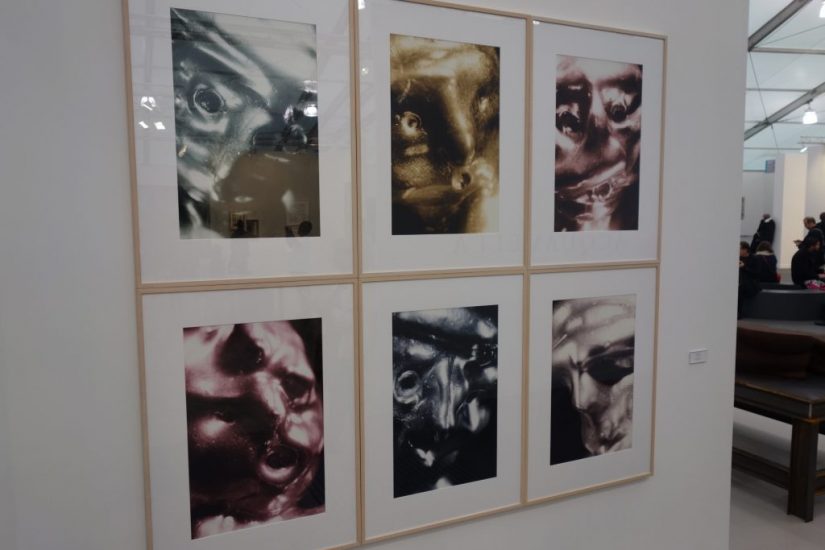 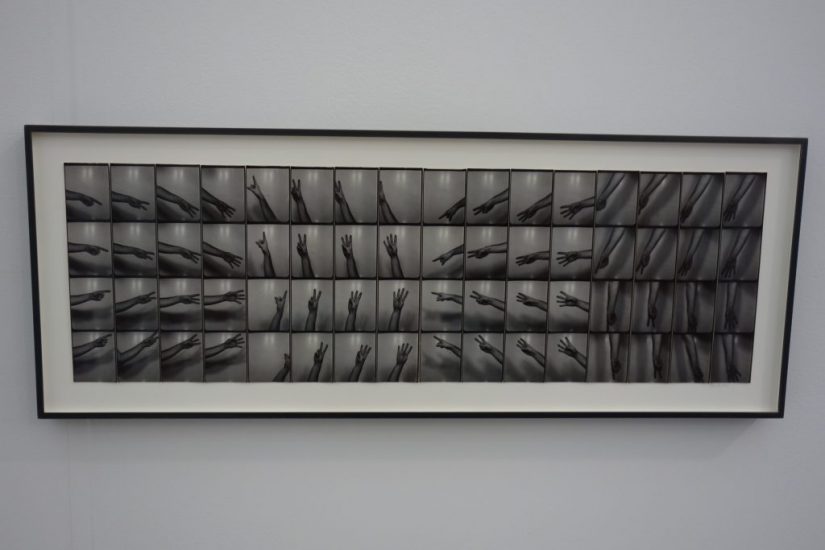 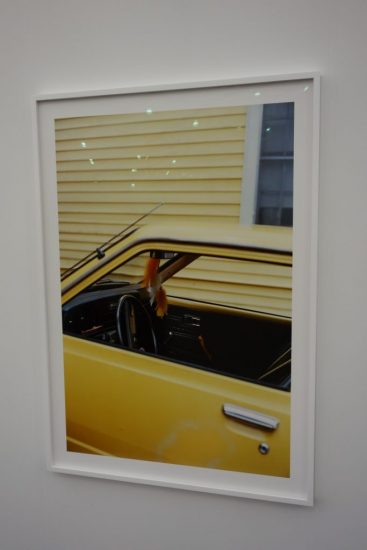 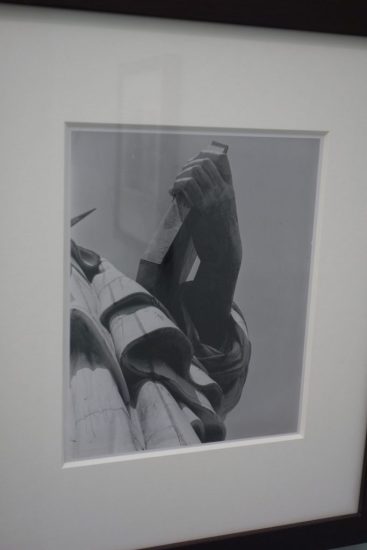 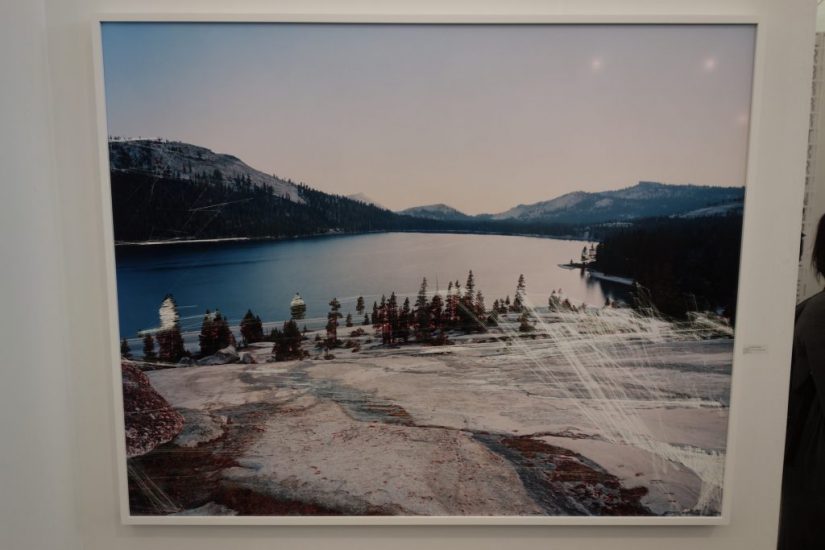 Goodman Gallery (here): Mikhael Subotzky, $35000. This new work by Subotzky uses two found illustrations of the same location as the basis for an interleaved historical diptych. Colonial settlers are paired with 1970s/apartheid era beach goers, with clear strips of vertical tape used to lift sections of one image and place them into the other. The result is a work that shifts back and forth in time, the two moments joined into a single reality.

Chi-Wen Gallery (here): Chien-Chi Chang, $12000. This 2003 image from Chang captures a moment of parallel existence in the lives of the artist’s parents. Awash in the sunlight glaring off the rice paddies, the two faces are captured in car mirrors, their eyes turned down in thought, the couple both intimately together and quietly apart.

Misako & Rosen (here): Motoyuki Daifu, $5000. We reviewed Daifu’s terrific photobook Still Life last year (here), but this was the first time I had seen actual prints from the cluttered tabletop series. Smart choices on scale (relatively large and enveloping) and color saturation (slightly toned down and less overbright) made the works effective, encouraging the viewer to see the formal patterns and repetitions amid the chaos.

Miguel Abreu Gallery (here): Eileen Quinlan, $10000. In this new work, the artist takes a rough pad of steel wool to the surface of the nude, creating allover scratches and dark back voids of compete removal. It smartly mixes soft sensuality with frenetic motion, the fists and scrapes creating a mood of pent up energy.

Galería Juana de Aizpuru (here): Cristina de Middel, €4000. This image is a from a new series entitled The Perfect Man, apparently mixing images of Indian workers with a Charlie Chaplin homage parade. Tinted with light blue, this hanging-from-a-hook hard hatter is akin to a comic automaton, both realistically industrial and oddly surreal.

Sikkema Jenkins & Co (here): Erin Shirreff, $20000. This new work from the artist extends her series of folded sculptural combinations, but does so in a noticeably larger size. As in her earlier works, the two sides of the page come together to create unexpected formal relationships, but now those shapes are even more emphatic and muscular.

Martos Gallery (here): Aura Rosenberg, $3500 individually, $70000 for the 22 image set. This 1993 series captures the artist Mike Kelley in various states of orgasmic ecstasy. Whether real or imagined/performed, we can never know (we only see his head), and that uncertainty gives the vulnerable open mouthed, eyes rolled back moments of release an incisive conceptual edge.

Nature Morte (here): Asim Waqif, $5000. This work further explores the sculptural limits of the photographic image/object. The sharp edged architecture of the old New York State Pavilion has been literally abused in this work, its surface smashed and deformed with a sledgehammer and dusted with actual cobwebs.

Galerie Lelong (here): Nalini Malani, $2000. This work combines image projections and mylar overlays drawn from the artist’s installations into a layered single frame evocation steeped in female injustice and political violence. A world map, a stoic face, and the panic of fleeing runners dissolve into one shadowy symbolic whole.

Salon 94 (here): David Benjamin Sherry, $18000. This new work brings Sherry’s signature bright colors and formal lines into the realm of the photogram, intermingling fragmented nudes and geometric patterns. The aesthetic connections to his tinted landscapes are obvious, making the move into the abstract layers of the darkroom more natural than we might have expected.

Sfeir-Semler Gallery (here): Walid Raad, $60000 for the set of 20 prints. This work wasn’t in Raad’s recent MoMA retrospective (reviewed here), so was somewhat of a discovery. In the various images, a hostage seems to disappear into the background, preventing his kidnappers from using the Polaroids to verify his identity. The work has the surreal magical realism of many of Raad’s projects delving into the history of Lebanon’s civil war, the images offered to us as an authentic document but filled with puzzling flights of fancy.

Jhaveri Contemporary (here): Yamini Nayar, $4000. I continue to be mightily impressed by Nayar’s ability to build unmanipulated constructions that distort space and perspective with such consistent force. These orange triangles stubbornly refuse to resolve, and it’s this indecipherable tension that gives them durable vitality.

Tanya Bonakdar Gallery (here): Lisa Oppenheim, $30000. This work appropriates a vintage Lewis Hine image of textile workers, and via a straight line vertical cut, focuses our attention on the curved spines of scoliosis. This surgical division completely recontextualizes the picture, transforming it from a historical document into something with a sharper conceptual message.

Taro Nasu Gallery (here): Takashi Homma, $12000. This upside down hotel room camera obscura image of the Empire State building infuses the famous New York landmark with a sense of mystery. Emerging from the dark like a falling knife, the blurred structure is given a dose of film noir glamour by the super glossy surface.

Meessen De Clercq (here): Thu Van Tran, $18000. This large scale jungle image has been washed with a harsh chemical bath, creating an acidic rusted effect, full of crinkled surface boils and seared colors. In an evocative representation of the effects of agent orange on Vietnam, the lush greenery has been turned into a scorched and rotting hellscape.

Parafin (here): Indrė Šerpytytė, $5000. When the statues of various Soviet leaders were removed from the plazas and city squares of Vilnius, they weren’t destroyed or tossed on the junk heap of history, but instead found their way to a leafy theme park. This booth was filled with clever two panel reconstructions, where vintage photographs have been married with recent images to recreate a time-jumping sense of intermingled past and present.

Galerie Gisela Capitain (here): Christopher Williams, $65000. In a new work, Williams turns his deadpan conceptual gaze toward a selection of aluminum cook pots, highlighting the sleekness of their shiny industrial perfection. The hopelessly long title details all of their specifications, turning the mundane into evidence of machined commercial grandeur.

Maureen Paley (here): Gillian Wearing, £18000. In concert with a recent two person show at the National Portrait Gallery in London, this image by Wearing continues her channeling of various artistic heroes, casting herself as Claude Cahun in a cloaked twin set. Her rubber masked portraits are always creepily on target, the likenesses consistently executed with remarkable accuracy but undermined by a hint of eerie uneasiness.

Alan Cristea Gallery (here): Cornelia Parker, $2250 each. These photogravures turn Fox Talbot’s glassware into shadowy geometric studies. Crystal decanters and etched wineglasses are transformed by the photogram process, their decorative patterns given life by the passing light. The images offer a sense of retracing photographic history, using the same goblets and jugs to riff on the initial still life experiments that helped solidify the medium.

Skarstedt Gallery (here): Thomas Schütte, $180000 for the set of 6. These works fall into the long tradition of sculptors reinterpreting their work via photography. In this series, fragments of Schütte’s manhandled faces are isolated and enlarged, the tinted eyes, noses, and mouths reconsidered and abstracted amid the swirled flares of light.

Southfirst (here): Jared Bark, already sold. The artist’s performative photobooth works have been rediscovered of late, and this booth was a solo show of these 1970s constructions. Using the four image strip as a guide, this smart work plays with finger counting, reversing the arm angles to create directional movement.

David Zwirner Gallery (here): William Eggleston, $185000. This booth continued the march of Eggleston’s work into the expansiveness of the largest size, offering a reprise of several works seen in his recent show (reviewed here) as well as other reconsidered images. This brash symphony in yellow gets at Eggleston’s eye for color, with the car, the siding, and the hanging feathers all playing off one another. The pink brush on the dashboard provides the necessary compositional kicker, preventing this ensemble from getting too clever.

Daniel Blau (here): Margaret Bourke-White, $6600. Tucked back in a corner, this series of 1936 views of the Statue of Liberty by Bourke-White were a true vintage surprise at this contemporary fair. The steep upward angle offers an unexpectedly strange view of the iconic statue, the curves of the drapery, the scale of the hand, and the single spiky crown fragment made new by the artist’s innovative framing.

Altman Siegel Gallery (here): Trevor Paglen, $25000. This broad landscape view of Lake Tenaya in Yosemite has been interrupted by the searching algorithms of an artificial intelligence system attempting to decode its content. Tiny lines splinter and attack the key visual elements, moving back and forth with frenetic determination, but are ultimately unable to interpret or quantify beauty. The work unpacks the gaps between machine and human seeing/thinking, forcing us to consider what it means to measure or identify.