As art fairs settle into predictable rhythms over the passing years, there is a constant imperative to keep things fresh and current. And half a dozen years into the Frieze New York experience, I felt the palpable sense of the fair trying hard to create excitement this year. From the Alex Da Corte inflated flying baby outside the tent and Maurizio Cattelan’s live donkey exhibit inside, to the free Solyent and the troupe of white faced mimes, there were plenty of bolted-on attractions (and distractions) to momentarily enhance the usual cacophony of visual stimulation found in the booths.

“Fly me to space you sexy android flight attendant” was a greeting I overheard as I walked the halls of this year’s fair, this ridiculously over-the-top Vince Vaughn from Swingers-style come on a quick reminder that the art world truly is a universe of its own. But beyond the sleek fashions and selfie-ready mirrored surfaces lie dozens of photographs worth discovering. And while the photography on offer this year seemed to be less widely spread than in previous years (aside from the unexpected confluence of middle range Wolfgang Tillmans prints), there were still lots of brand new works to be encountered for the first time, as well as a handful of surprising vintage finds to be unearthed. More sifting and patience is required this year to dig out the best of the photography, but dedicated photography collectors will still find plenty worth searching for.

This report is divided into two parts, with image highlights shown in annotated slideshows. For the most part, I have tried to avoid works that have recently been on view in New York gallery shows or that we have already reviewed in another context, but there are always a few duplicates, as galleries tend to show off their recent material. Gallery names/links are followed by the artist/photographer name, the price of the work, and some notes and comments as appropriate. The booths are loosely organized by my path through the fair, beginning at the North entrance (I took the ferry from 35th street this year). 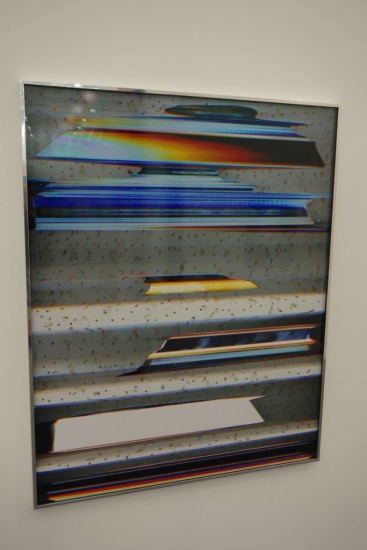 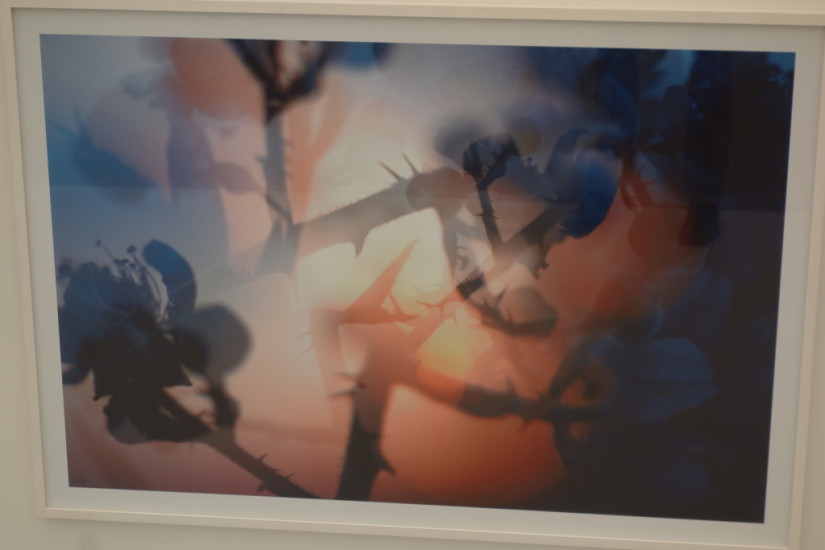 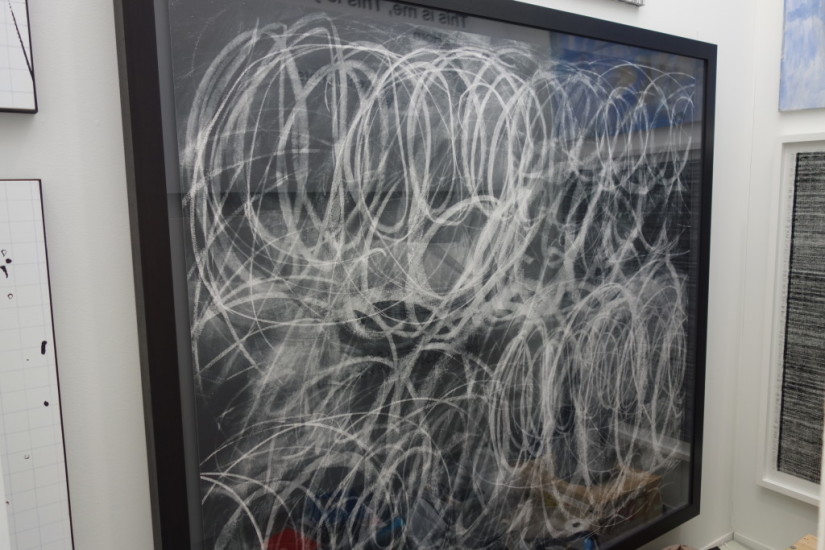 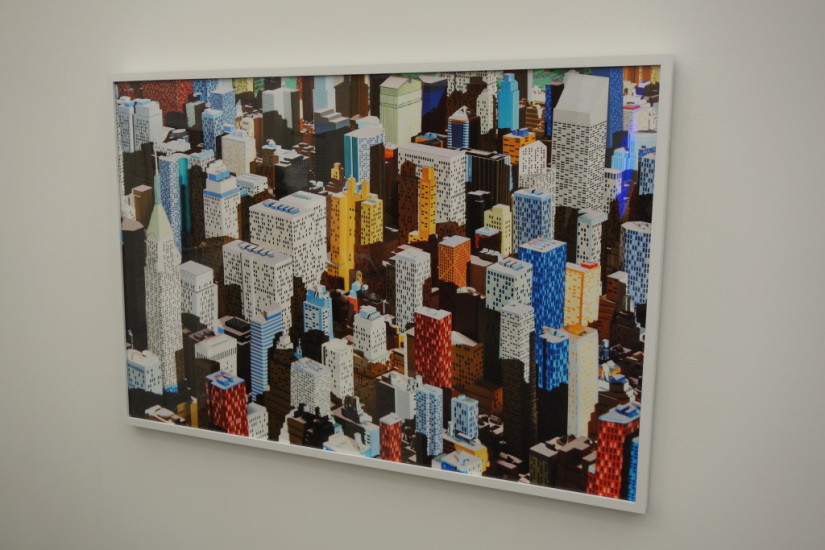 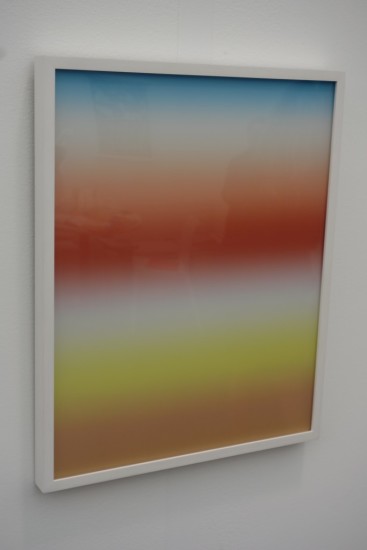 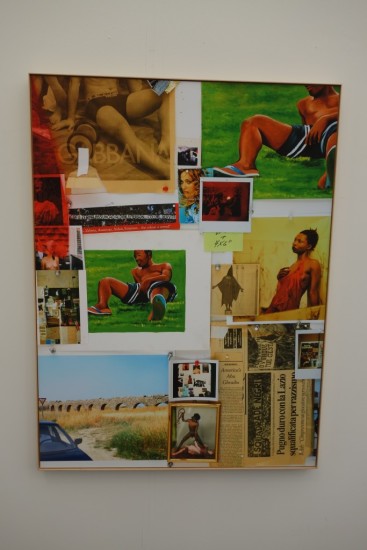 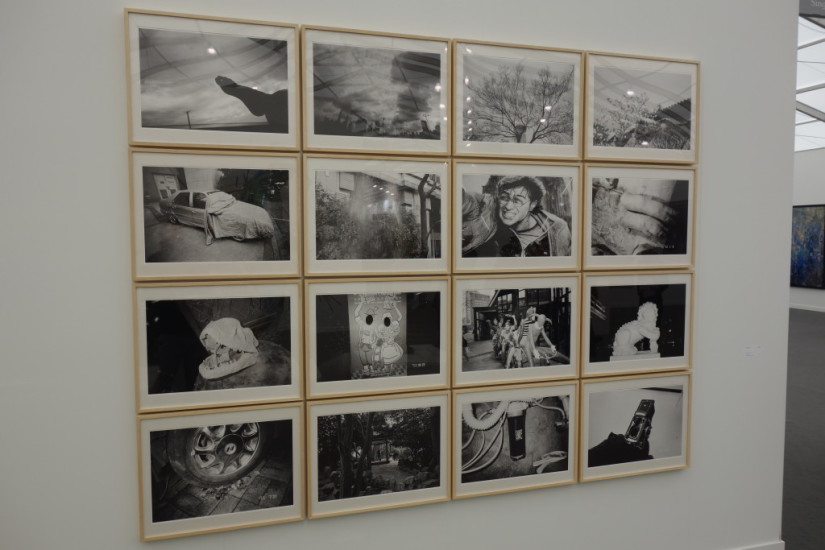 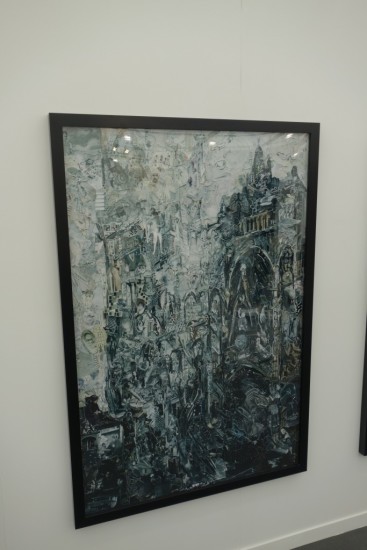 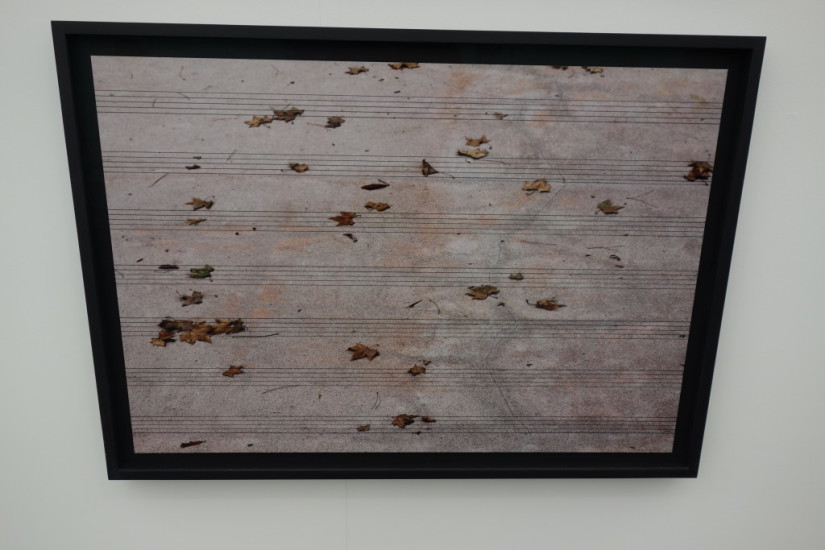 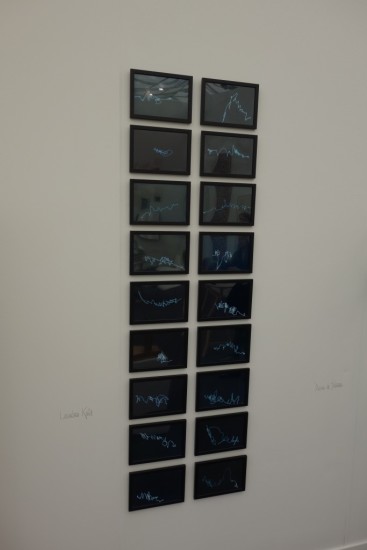 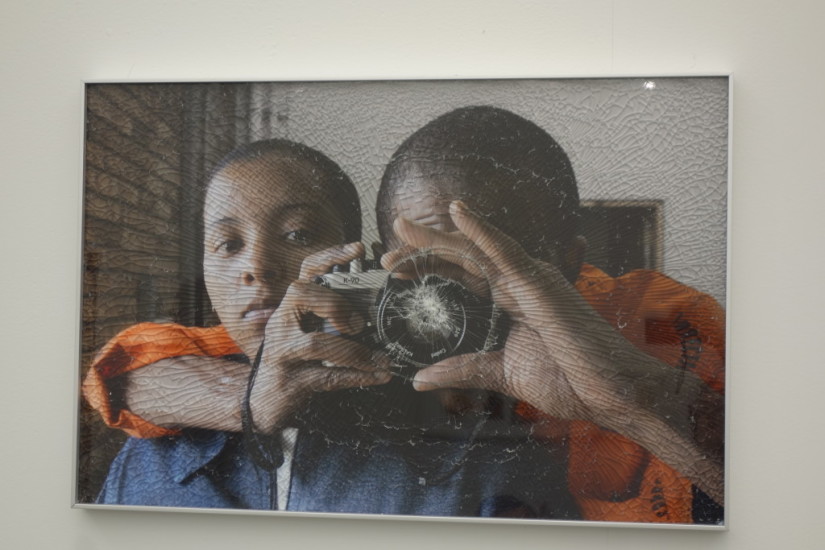 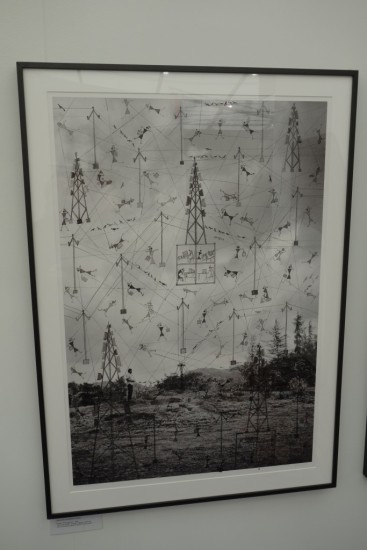 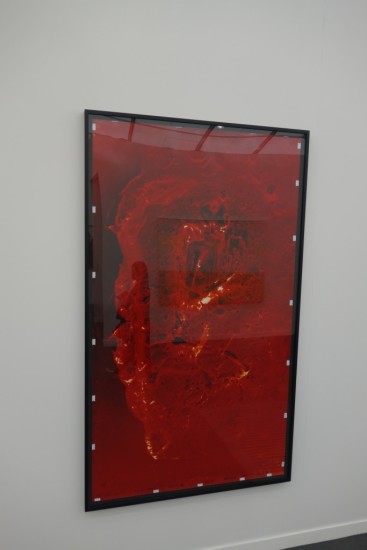 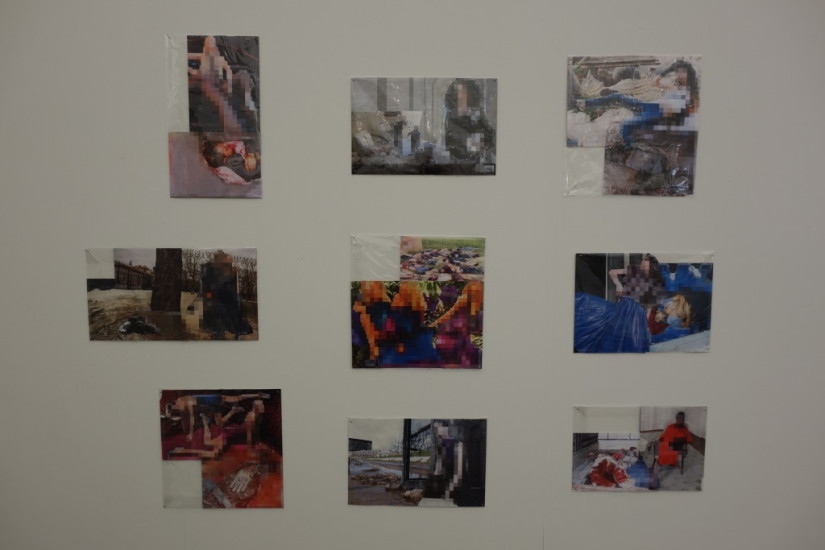 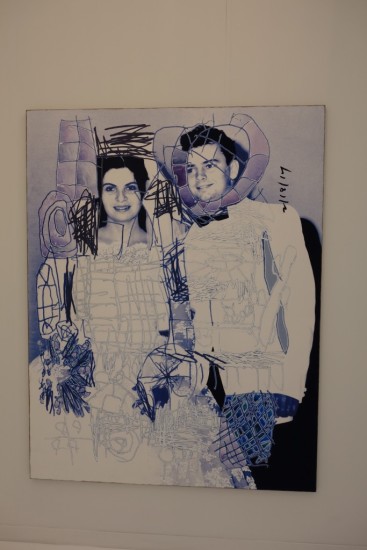 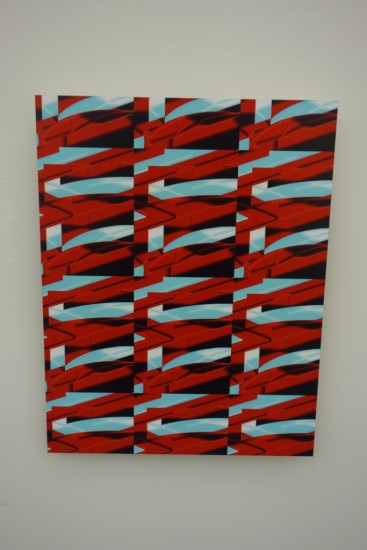 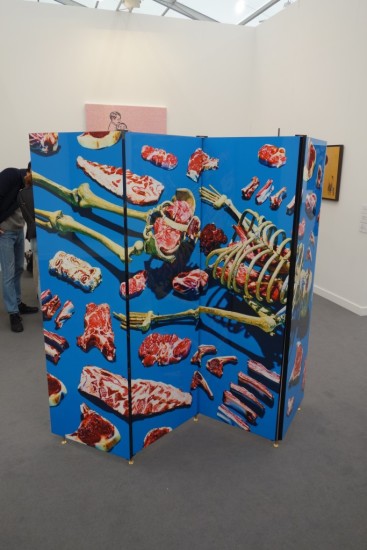 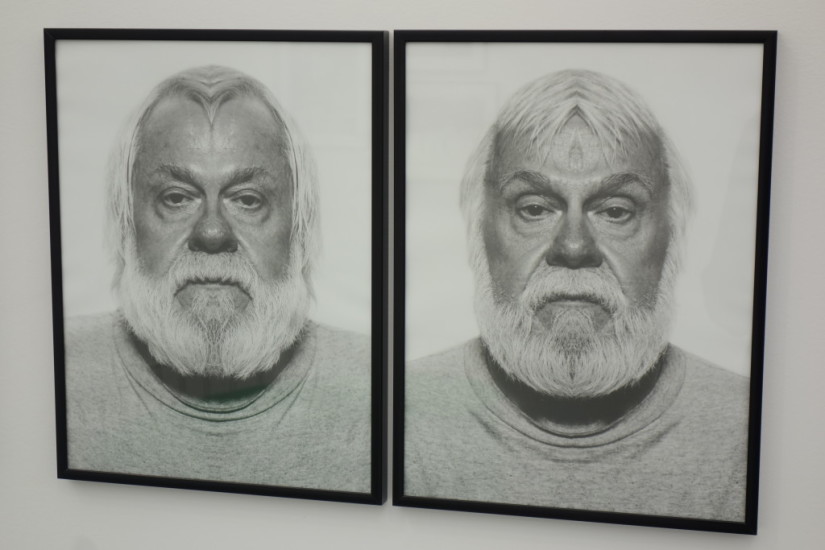 Miguel Abreu Gallery (here): This digital smear wasn’t in Eileen Quinlan’s recent show in New York (here), but its process is similar to other works that were on view. A mirror is used to reflect the light from a scanner back into its receptors, creating distortions that slide into a spectrum of digitized color. This particular work picks up slices of the perforated holes of the ceiling tiles, adding a textural quality to the intermingled mix. Priced at $20000.

Sprüth Magers (here): While there were plenty of sublime industrial typologies from the Bechers in this booth, the wall of 1990s era double exposure florals by Fischli/Weiss was much more unexpected. This image has a ghostly cast, with spiky thorns and delicate blossoms emerging from the thin haze of color. Priced at $25000 each.

Victoria Miro Gallery (here): This new work by Idris Khan was tucked into the crowded storage closet. A more straight lined chalkboard image alluding to Duchamp is on view in the main body of the booth, but these spooling layered swirls reminiscent of Cy Twombly are more loosely gestural. Priced at £55000.

Queens Museum (here): This booth was filled with photographic works by Spencer Lowell, using the museum’s famous physical panorama of New York city made for the 1965 World’s Fair as a subject. His images capture the meticulous street-by-street detail of the model, with an eye for bird’s eye angles and top down perspectives, and pop with bold color. Priced at $5000 each.

RxArt (here): This new work by Walead Beshty takes the colors of frequently prescribed medications as its inspiration. A cocktail of pills leads to soft undulating gradients of pastels. Priced at $3000.

Sommer Contemporary Art (here): This recent work by Lyle Ashton Harris recreates a dense montage of elements tacked to a studio wall, intermingling newspaper clippings, paintings, and photographs of varying types. Mixing Abu Ghraib evidence with Roman aqueducts and the echoed gestures of soccer players and fashion models, it pushes on racism and cultural behavior from different directions, embracing the painterly texture of canvas as its base. Priced at $17000.

ShanghART Gallery (here): This grid of black and white images from the Chinese duo Birdhead is from the same period as the works they contributed to MoMA’s New Photography show in 2012 (here). Pigs and water filters coalesce with flowers crushed under car tires, creating an atmospheric urban impression with a hint of uneasy malaise. Priced at $16000 for the set.

Sikkema Jenkins & Co. (here): This both was a solo presentation of the work of Vik Muniz, with a number of new works on display. This image comes from a set of 5 images recreating Monet’s views of Rouen Cathedral in various pastel tones. Using scraps from magazines and art books as his source material, he’s replicated their shifting Impressionistic fuzziness, with tiny fragments of Warhol, Pollock, Matisse, and Leonardo thrown in as references for those with a keen eye. Priced at $39000.

Galería Juana de Aizpuru (here): The elegant simplicity of this work by Glenda León is what makes it so successful. Scattered leaves on a concrete sidewalk become a sweeping musical score with the additional of tight arrays of lines, each leaf a carefully placed note in the composition. Priced at €6200.

Henrique Faria Fine Art (here): This 1970s era grid of works by Leandro Katz was crafted using the moon as a writing instrument. Bright squiggles wander across the tinted blue night, long exposures allowing the dot of light to move and wander in continuous lines. Conceptually similar to drawing with light experiments by other photographers, the pictures add the elements of celestial space and distance to the artistic equation. Priced at $40000 for the set.

Goodman Gallery (here): While this image from Mikhail Subozky’s well known Beaufort West series isn’t new, the addition of the smashed glass is. As part of gathering together a selection of works for a recent exhibition installation, Subotzky reinterpreted a group of images that had continued to trouble him for one reason or another. The shattered glass and the embedded force of that destruction adds an additional layer of tingling emotional violence to the photographs. Priced at $5700.

Nature Morte (here): This work pairs the photography of Gauri Gill with the tribal overpainting of Rajesh Vangad. Gill’s images capture Vangad standing in his local landscape, his intricate dotted line designs replicating abstracted communication emanating from the telephone wires in the photograph. The all over visual interruption and cultural grounding reminded me of Shirin Neshat’s calligraphy. Priced at $16000.

Grimm Gallery (here): This image is the newest iteration of Matthew Day Jackson envisioning his death. Buried in a basement crypt beneath a recently purchased house, his form slowly emerges from a seething mass of red created by the tenuous light of a pinhole camera. Priced at $35000.

Galerie Chantal Crousel (here): These hand cut works by Thomas Hirschorn were some of my favorites at the fair. Combining horrific images of rotting corpses and bloody war with glamorous fashion shots, he then obscures the models with swatches of colored pixels. The collages oscillate between hidden abstraction and confrontational violence, opening up thorny questions about what we are allowed or encouraged to see. Priced at $17000 each.

Gavin Brown’s Enterprise (here): The painter Rob Pruitt wouldn’t normally be an artist considered to be part of the world of contemporary photography. But Pruitt’s newest works cross over into the muddy zone where photography and painting are increasingly being hybridized. This work starts with a scanned family photo, which is merged together with a drawing in the digital realm and then inkjet printed onto canvas, with subsequent layers of overpainting added on top. As more and more painters adopt digital workflow and incorporate fragments of photography into their compositions, the crisp definitional edges of what is painting and what is photography are going to get hander and harder to separate. Priced at $90000.

Galerie Perrotin (here): Maurizio Cattelan and Pierpaolo Ferrari’s surrealy audacious Toilet Paper is one of the best photographic publications to emerge in recent years. Its innovative point of view merges commercial still life production values with offbeat confrontations and juxtapositions, with a biting wit found almost nowhere else these days. This booth features a dining table and folding screen affixed with their gleefully brash images. The screen combines a skeleton and slabs of meat on one side, with drums and snakes on the other, perfect for jolt-inducing privacy. Priced at €42000.

Galeria Le Guern (here): Jiří David’s mirrored portraits from the 1990s play with the unnatural symmetry of faces. Here John Baldessari becomes perfectly doubled, his signature hair and beard parted with unsettling evenness. David’s works elegantly open up all kinds of psychological questions about left/right brain dominance, split personalities, and male/female sides of people, with dozens of artists from all over the world as his subjects. Priced at $4500 for the pair.

Continue to Part 2 of this report here.