While every year the sprawling experience of the Armory show is relatively the same, at least in overall feel, I try to bring a new collector-centric mindset to the proceedings each time I visit to keep things fresh. In prior years, I have systematically tallied all of the available photography, or attempted to provide a representative cross section of what was on view, both good and bad. This year, I think I carried along my more jaded self for some reason – I had less patience for the group show booths of gallery artists, the recycled works from the previous year’s shows, and the usual formula of lesser known Tillmans, Sherman, Ruff, or other bold faced name sprinkled in as flavoring; in short, I was a tougher judge of marginal or forgettable photography. I wanted to see some things I hadn’t seen before (mostly new, but some unearthed old as well), and so mostly gravitated away from recognition and toward discovery and surprise. As a result, my highlights are a smaller pile than usual, if only because they were gathered with a harsher eye toward editing out the chaff.

The slideshow below is roughly organized along my path through the fair, starting to the right out of the entrance gate and moving up through Pier 94 first and then on to Pier 92 via the rickety metal stairs. The individual photographs are accompanied by linked gallery names, artist/photographer names, and associated description, commentary, and prices where appropriate. 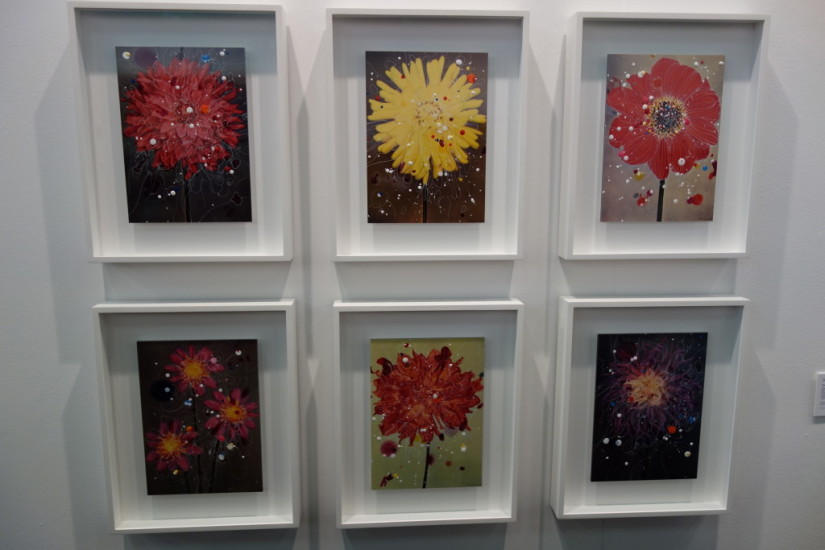 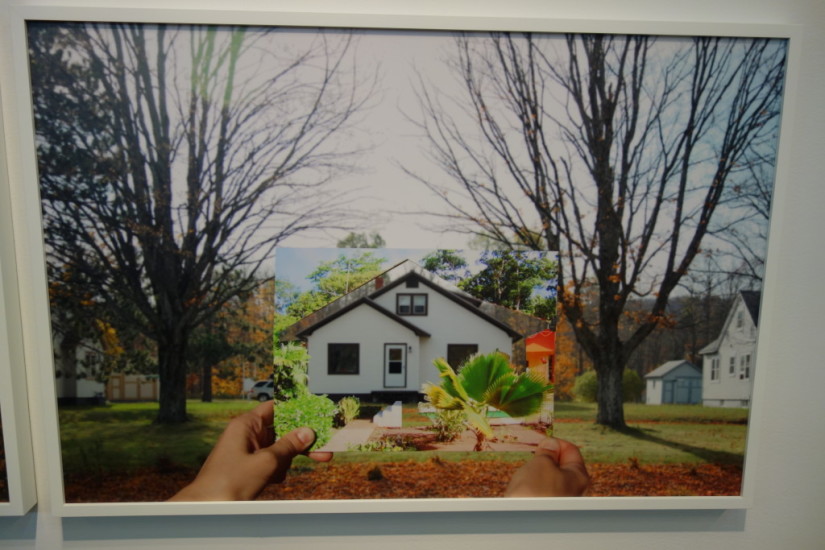 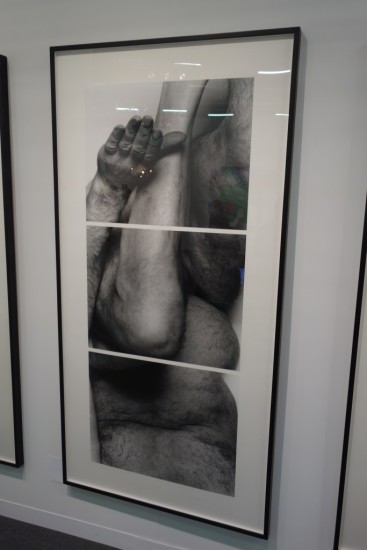 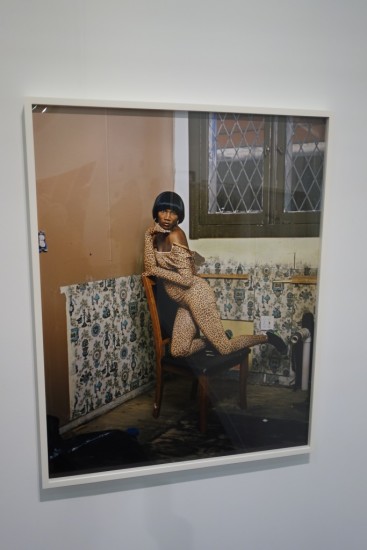 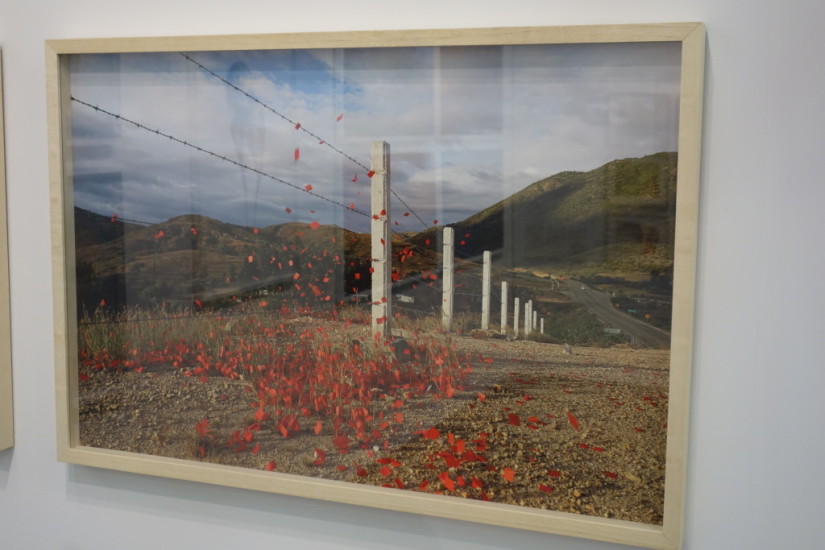 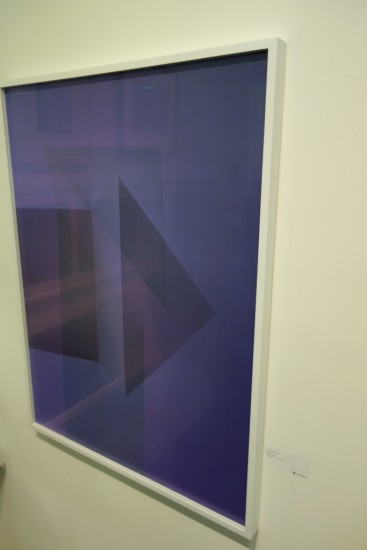 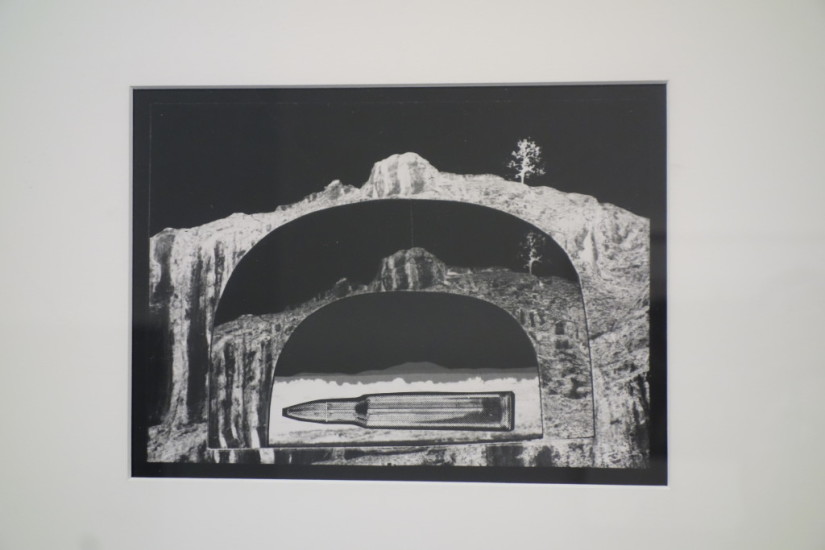 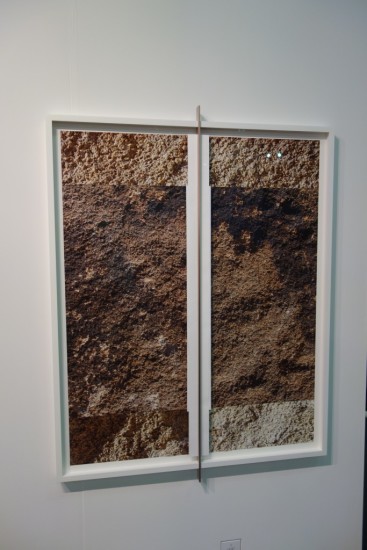 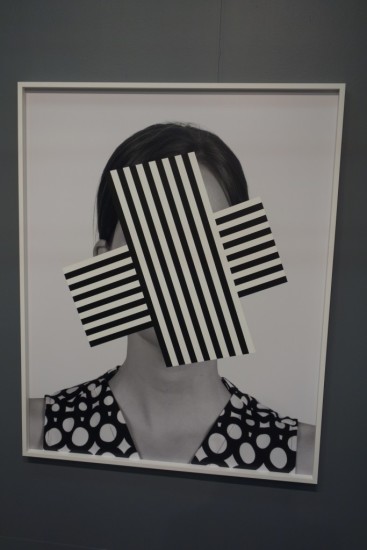 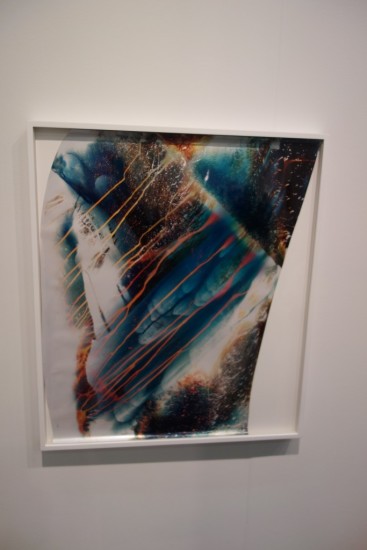 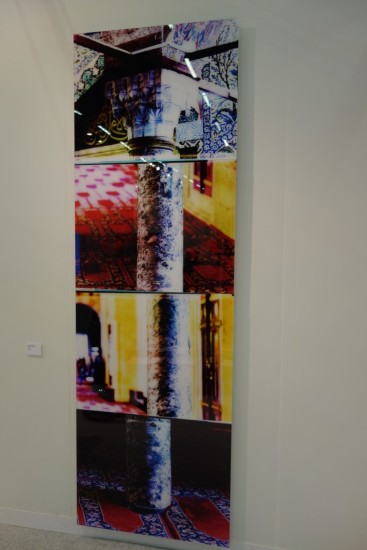 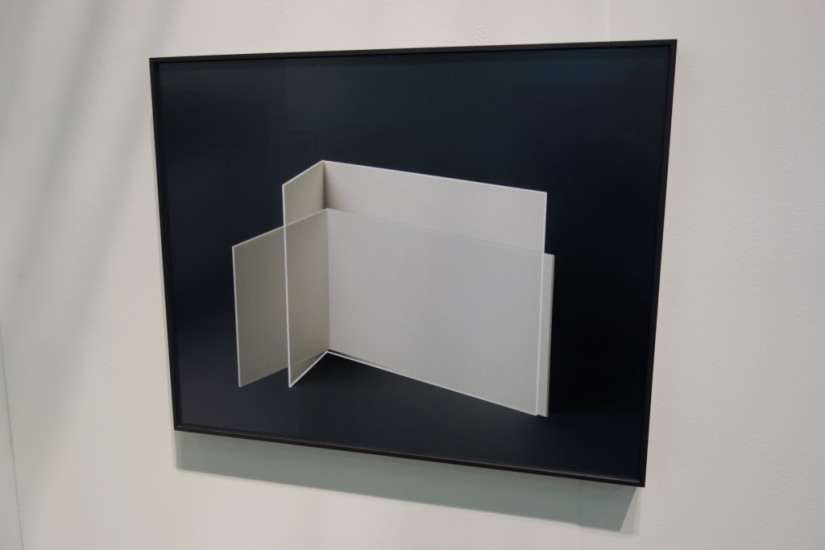 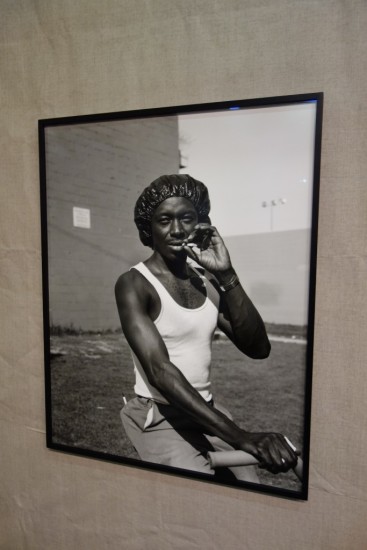 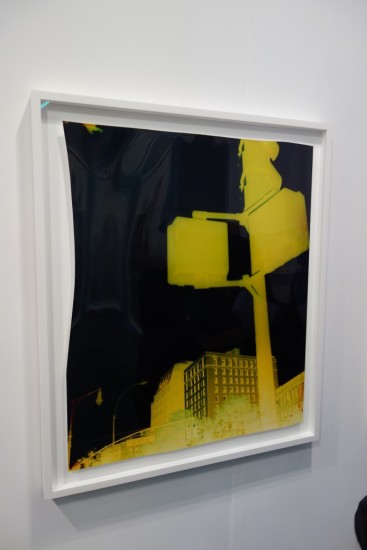 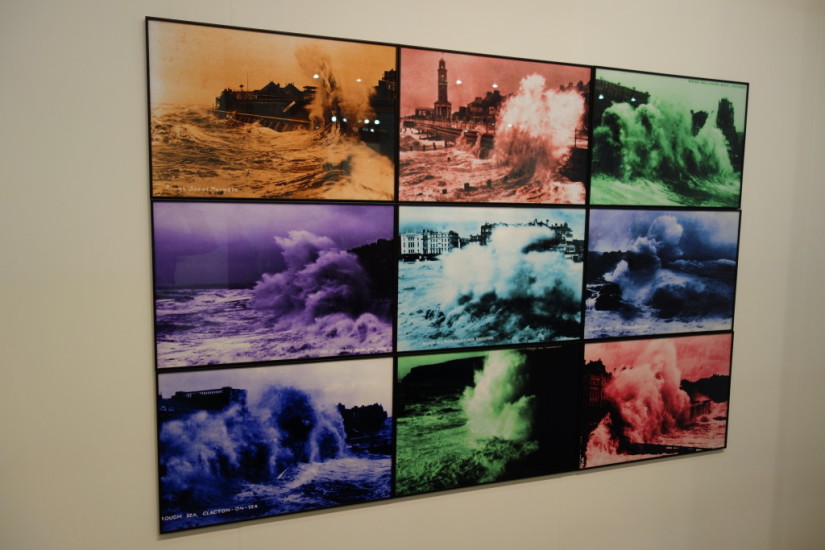 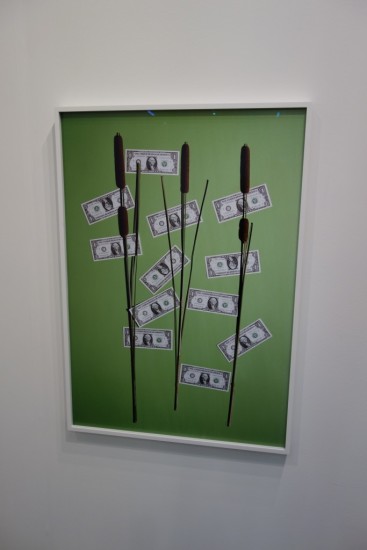 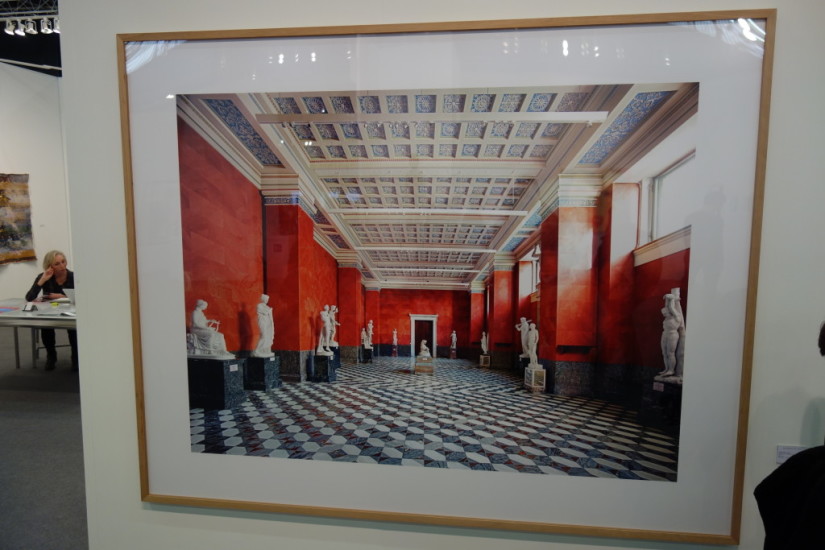 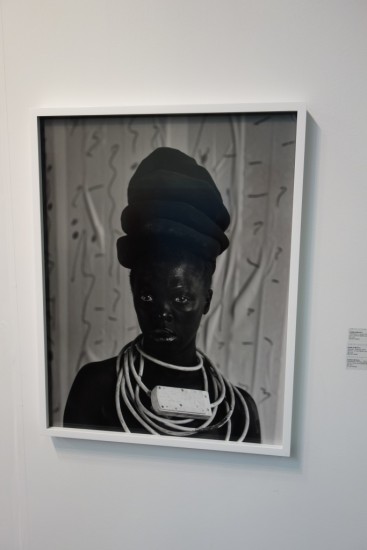 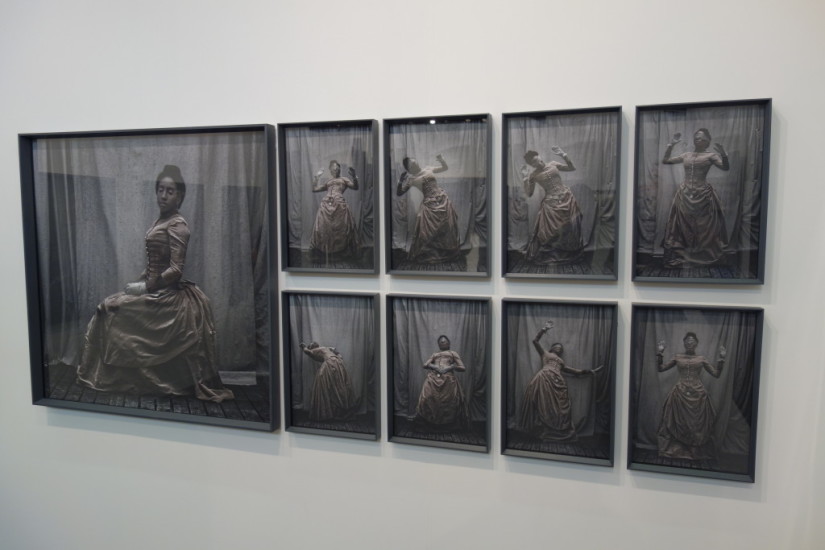 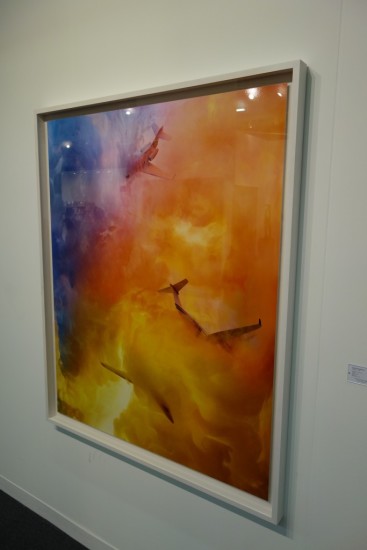 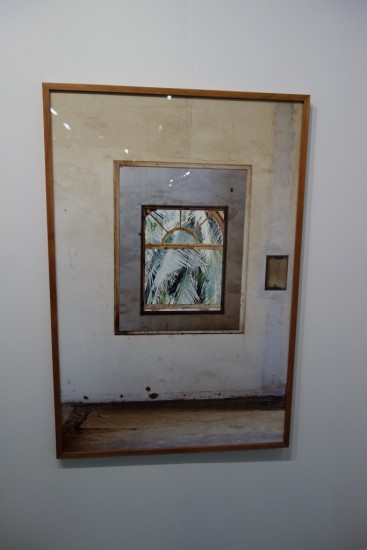 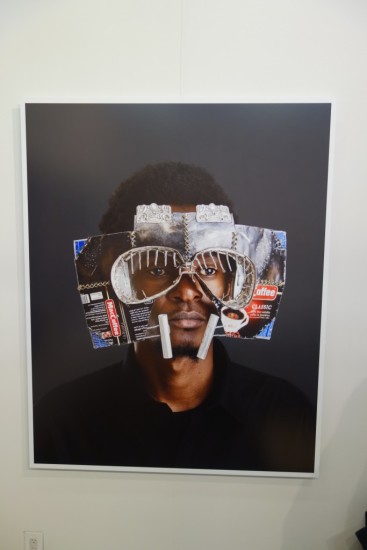 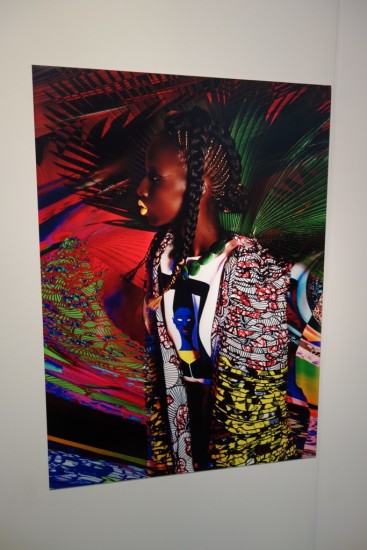 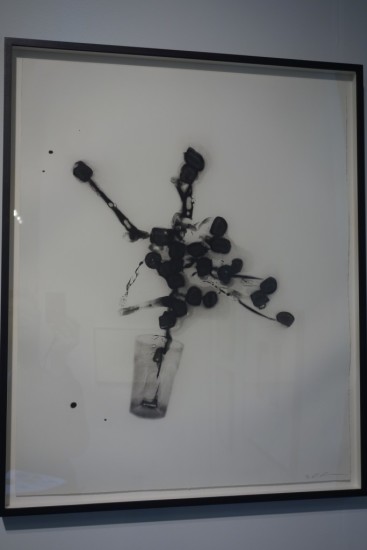 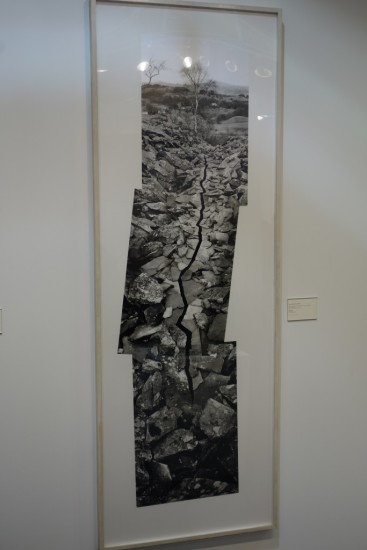 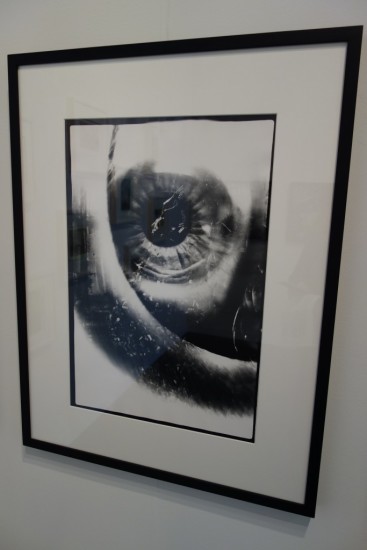 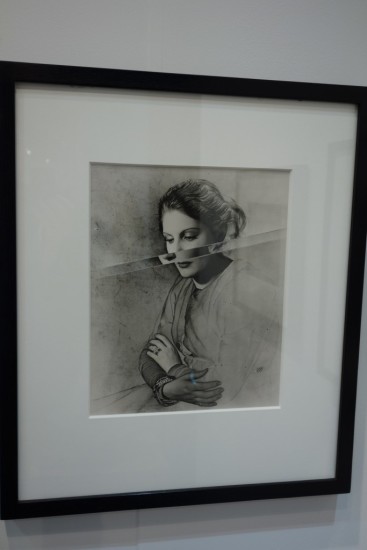 Edwynn Houk Gallery (here): This grid finds Sebastiaan Bremer applying his signature overpainting techniques to images of flowers. Tiny swirling dotted lines and larger drops and spots add another layer of expressive decoration to the showy blossoms. Priced at $8000 each in the smaller size, with larger works available for $18500.

Sicardi Gallery (here): Clarissa Tossin’s images of modest houses leverage Kenneth Josephson’s hand outstretched picture-within-a-picture approach with a new twist. Fragments of angled rooflines and building forms (or in this case, the landscaping surrounding the house) are replaced, often with contrasts of sharpness and blur, creating dissonances of context and memory. Priced at $5500.

Galerie Nordenhake (here): This booth was a solo presentation of John Coplans’ superlative male nudes. This specific work turns his aging, hairy body upside down, the lines of the shin and hand in unexpected interplay. These images remain fresh and engaged even after many decades, their investigation of the forms of the male body still honest and clear-eyed. Priced at $18000 and already sold.

Rhona Hoffman Gallery (here): This open pipe and cheetah print body suit image from Deana Lawson was recently on view in her Art Institute of Chicago show. Its push and pull of identity under construction simmers with tension and aspiration. Priced at $15700.

Mor Charpentier (here): Drawing on global measurements of happiness naming Mexico one of the world’s happiest countries, Edgardo Aragón tosses confetti-like fluttering red paper into this landscape, the barbed wire fence adding a layer of uncertainty to all the celebratory positivity. Priced at $5000.

Aperture (here): This new work by Sara VanDerBeek falls into a deeper range of purple than her images that were included in the recent Guggenheim show. Transparent geometries intermingle like ghosts emerging from the shadows. Priced at $12000.

Bruce Silverstein Gallery (here): John Wood’s Gun in the Landscape series from the 1960s feels both of-a-particular-time and freshly relevant. Images of guns and bullets have been collaged into positive/negative views of rocky landscapes, creating clashing juxtapositions full of brash confrontation. Priced at $9500.

Daniel Faria Gallery (here): Douglas Coupland’s large scale portraits have been boldly obscured by various forms of patterned camouflage, each face overpainted to prevent software-based recognition. They have both an eye-catching graphic quality and provide a more subtle study of reactions to intrusive surveillance. Priced at $16000 and already sold.

M+B (here): In contrast to Mariah Robertson’s more hard edged, iterative photograms on view recently in New York, these works are a return to her expressionistic gestural side. Tiny dots of light cluster like fireflies amid the larger washes and drips of chemicals, messily bending and falling away from a hanging line. Priced at $5500 and already sold.

Galleri Brandstrup (here): This four-part image of a marble column in a Turkish mosque finds Ola Kolehmainen playing with perspective and color in more improvisational ways than in his previous works. Changes in camera angle bring yellow and red into view in an alternating rhythm, the texture of the mottled stone unifying the composition. Priced at €17000.

GRIMM Gallery (here): Hung against a rough burlap wall, Dana Lixenberg’s portraits from her Imperial Courts series have a surprisingly regal air. While I had previously seen her images in book form, as large-scale prints, they are even more powerfully engaging. Priced at €6000.

Yossi Milo Gallery (here): John Chiara’s newest works take on the well-traveled urban geography of New York city. Using his massive hand built cameras in the streets, he has made images that are largely interested in the negative spaces and silhouettes created by the skyscrapers and apartment buildings. This image employs a crosswalk post to anchor the composition, the yellow tinting enhancing the pop of its sculptural outline. Priced at $9500.

MOT International (here): This new work by Susan Hiller catalogues the frothy violence of crashing seaside waves, with the cleverly open-ended title of Rough Places. Priced at $77000 for the set of 9 prints.

Ben Brown Fine Arts (here): I’m not sure if it was the heightened geometric elegance of this gallery at the Hermitage or Candida Höfer’s visualization of it that stopped me in my tracks. Between the red walls, the patterned ceiling and floor, and the white statues, it’s a controlled stunner, and the kind of picture Höfer makes better than anyone else. Priced at $65000.

Yancey Richardson Gallery (here): Zanele Muholi continues to make unexpected self-portraits. Building on her series that began in 2014, this image finds her wearing an elaborate necklace made from a white electrical plug and a headpiece piled up like a layercake, her skin darkened to the point where she nearly becomes a two dimensional silhouette. Priced at $7700.

Gallery MOMO (here): Ayana V. Jackson’s blindfolded woman avoiding invisible bullets almost reads like the steps of an elegant ballet. Trying not to be shot, she jumps and contorts in her period costume, her hands in various communicative forms of pulling away. It’s a powerful taxonomy of gestural evasion. Priced at $15000 for the set of 1 large and 8 small prints.

Galerie Daniel Templon (here): David LaChapelle’s over-the-top constructions don’t always interest me, but this image of private planes lost in a chaotic fog of colored smoke seems to hit the right note of acerbic irony. Its playful absurdity should resonate with those art fair goers who can appreciate the ridiculousness of the surrounding spectacle. Priced at $60000.

Galerie Cécile Fakhoury (here): This booth was filled with works from François-Xavier Gbré, a photographer whose images were recently on view at the Walther Collection in New York. This telescoping window was similar to an image of an iron staircase railing in that show, each one squaring off the architectural detail amid the surrounding empty decay. Priced at $8200.

SMAC Gallery (here): Cyrus Kabiru’s large scale portraits have a DIY, scavenger steampunk vibe. His handcrafted masks made from wire, beads, and various shards of repurposed tin are the real highlight, but the portraits turn the sculptures into vibrant talismans of aspirational identity. Priced at $5500.

Alan Cristea Gallery (here): A simple idea executed well – a photogram of a fallen glass tumbler of ice and liquid, the splash and flow becoming something like a floral bouquet. Cornelia Parker, in photogravure, priced at $2550.

Michael Hoppen Gallery (here): The three vintage exhibition prints from Eikoh Hosoe’s Ordeal by Roses were certainly a treat to find in this booth. Combining an eye, a brick pile, and a male nude in a disorienting multiple exposure, this large print offers an up-close chance to wander into the artist’s powerfully surreal symbolism. Priced at $28000.

Osborne Samuel (here): Not only was this Erwin Blumenfeld work strongly isolated and solarized, it’s jarring cut-through face upends its quiet simplicity, pushing it into a jittering misalignment of time. Priced at $150000.