It seems that every time I take a walk through a fair as large as the Armory, it feels like there are hundreds of possible fairs I could tell you about. In past years, I have tallied everything, making exhaustive lists of photographs on view, with the idea that the sum total of what was on offer must tell us something about the state of medium. I’ve also tried the “skim off the top” approach, highlighting the biggest, flashiest, and most notable photographs, often featuring new work by big name photographers, again with the idea that this collection of work (even if it was dull or misguided) might give us some insight into how our leading practitioners were reacting and responding to recent times.

This year, I did neither, opting for a different strategy focused on the simple joy of surprises and avoiding the whole concept of even handedness. You won’t find the big Gursky, the new Casebere, the new Ruff photogram, or the candy colored Pierre et Gilles image of Marc Jacobs in this report, although they are all here to be discovered in this warren of booths. I’ve also consciously avoided works I’ve seen or reviewed in the recent past in galleries or at other fairs (unless I’ve fallen in love with them again), assuming this readership will already be familiar with that work, even if it is re-exhibited here. So this year, this report is a trail of “new to me” or things simply so enjoyable that I couldn’t resist a quick plug. Follow along at your own risk, knowing that if you walk these halls yourself, you’ll inevitably chart your own path of interests.

The slideshow below is roughly organized along my path through the fair, starting to the right out of the gate and moving up through Pier 94 first. Individual works are accompanied by associated commentary, artist names, and prices. 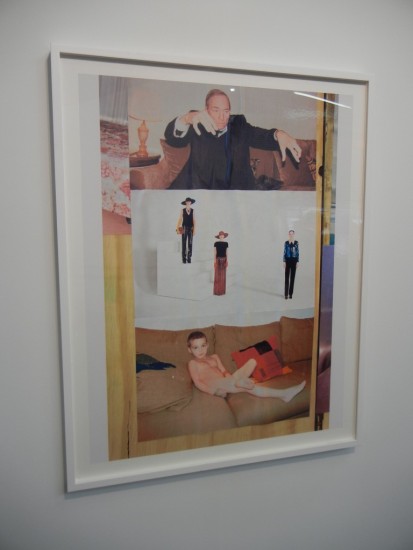 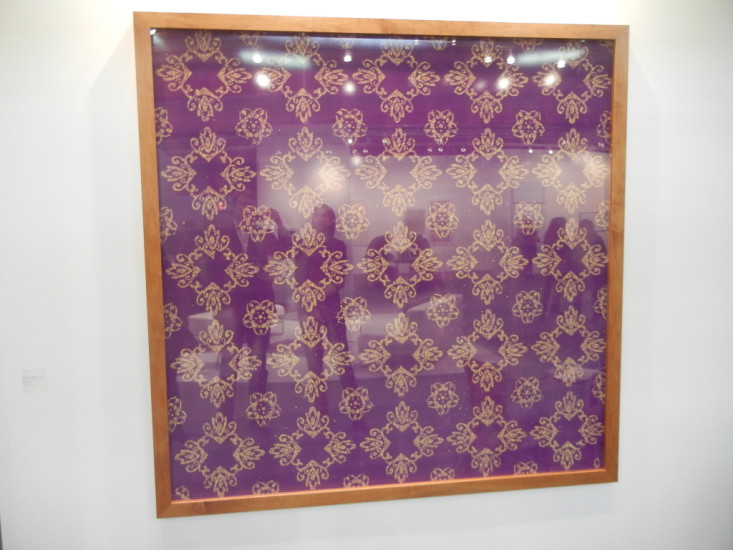 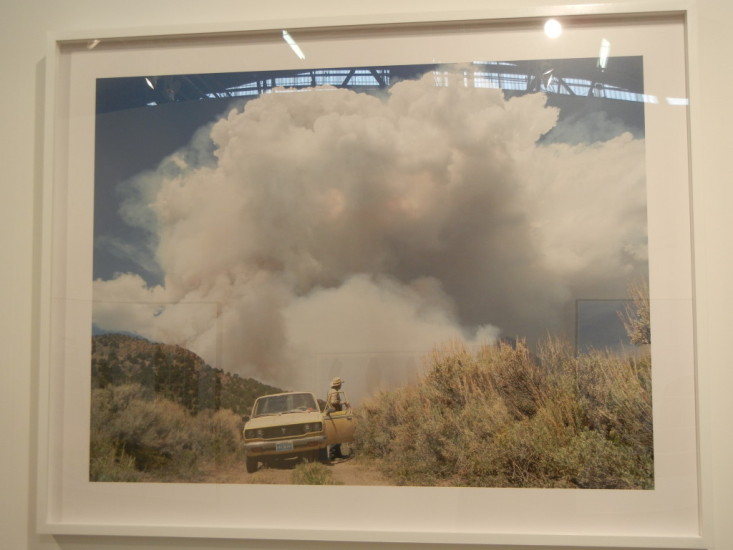 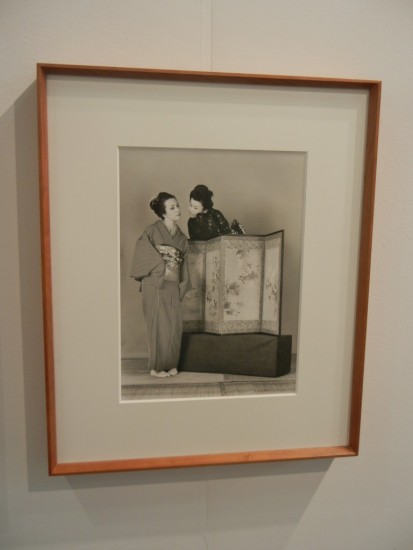 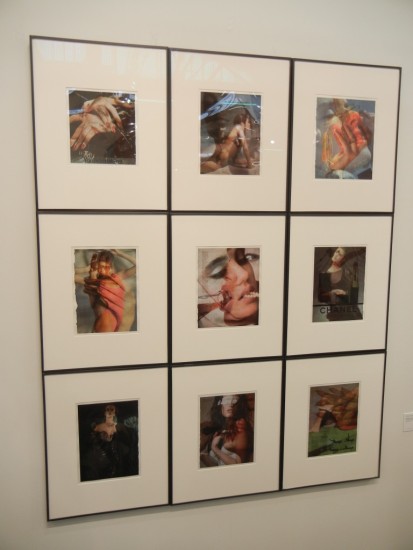 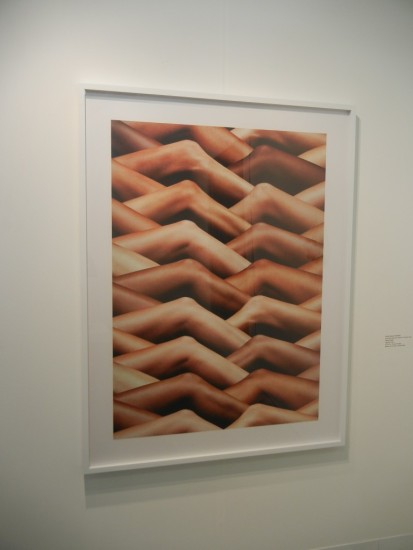 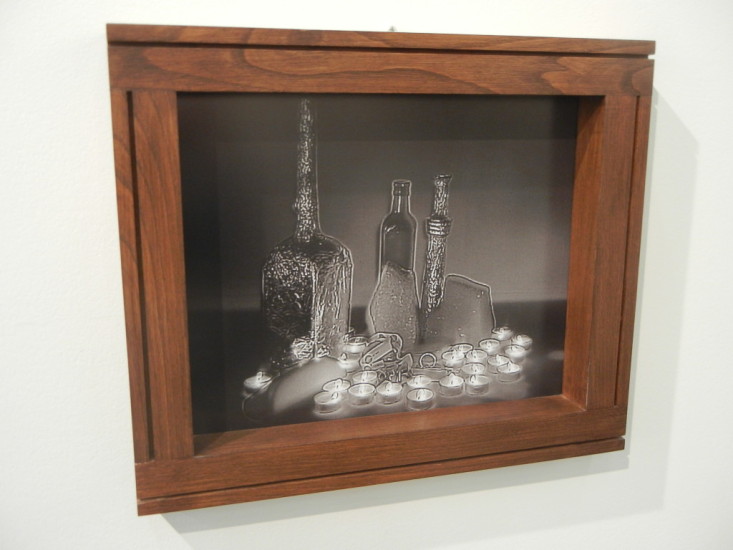 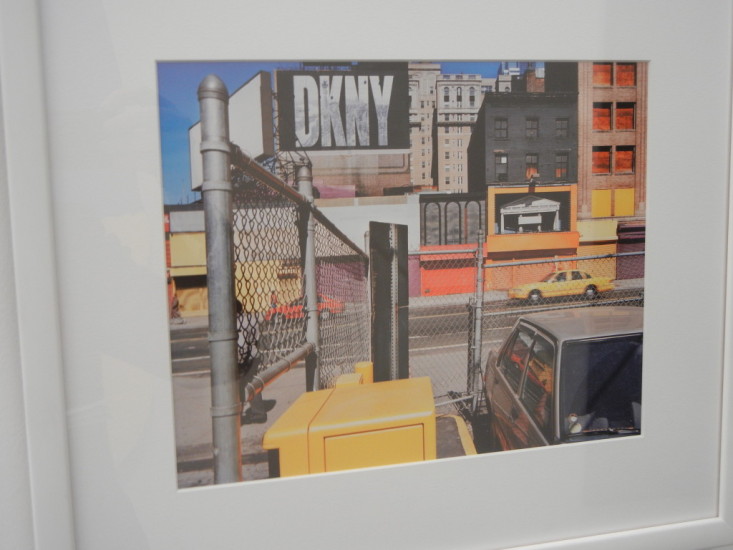 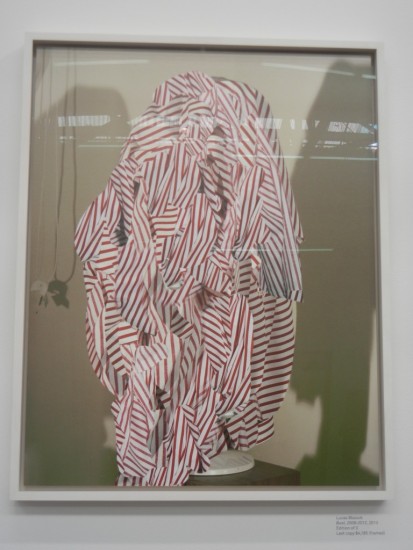 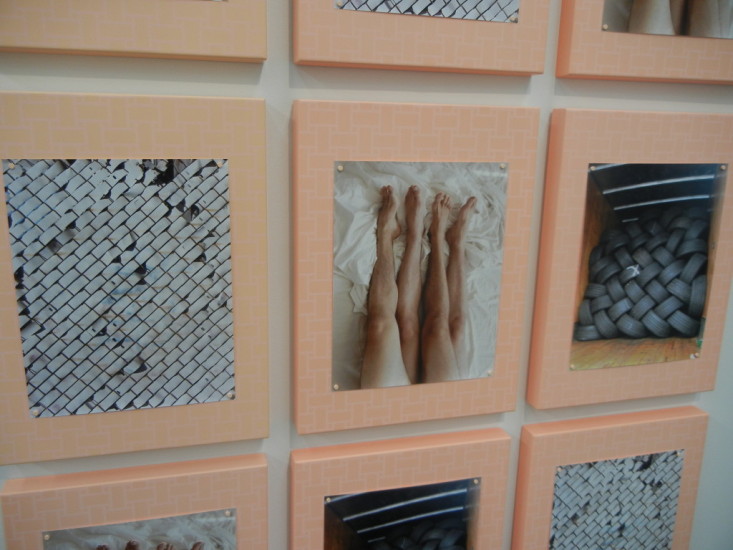 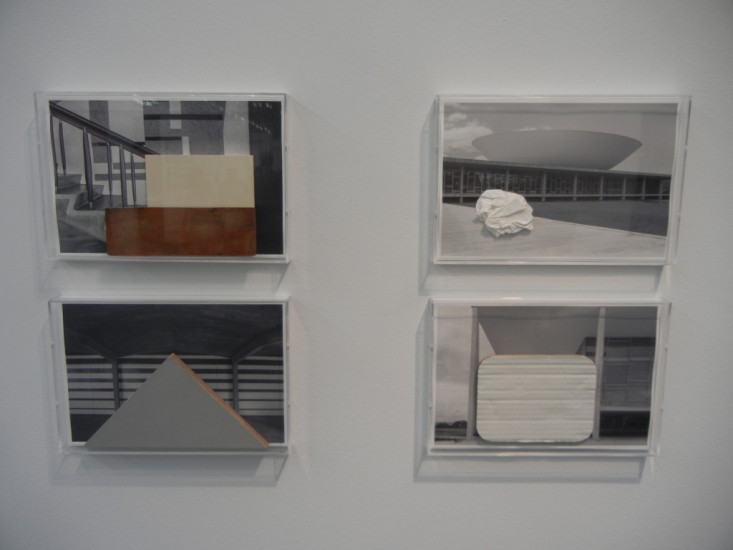 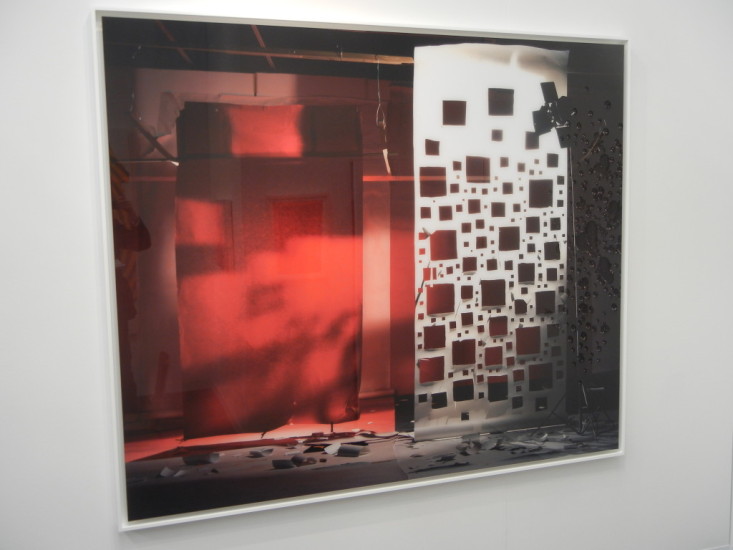 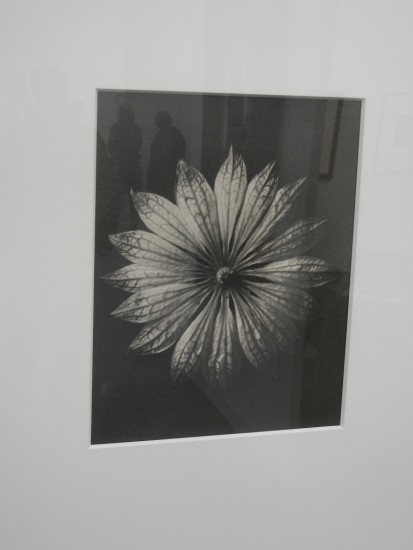 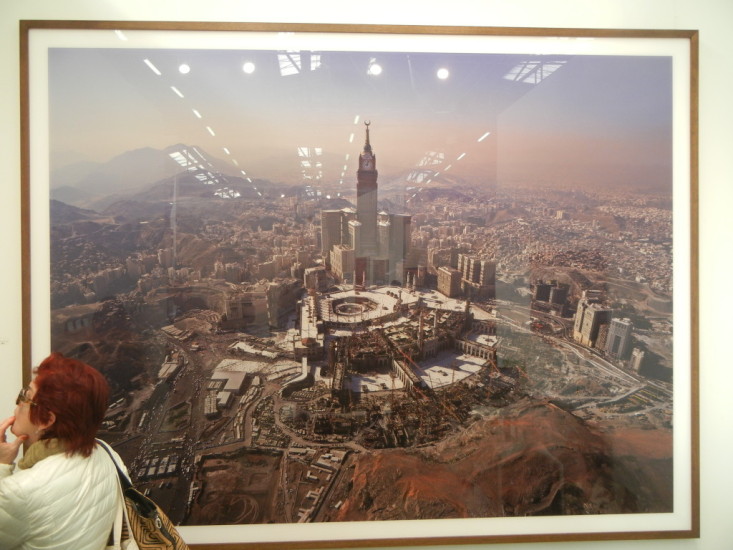 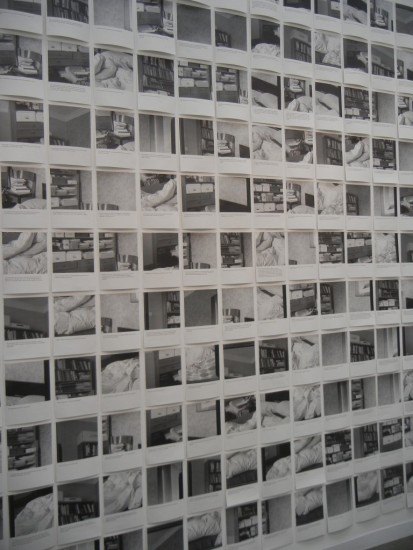 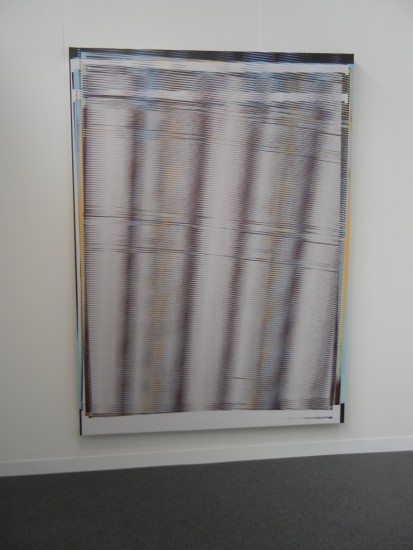 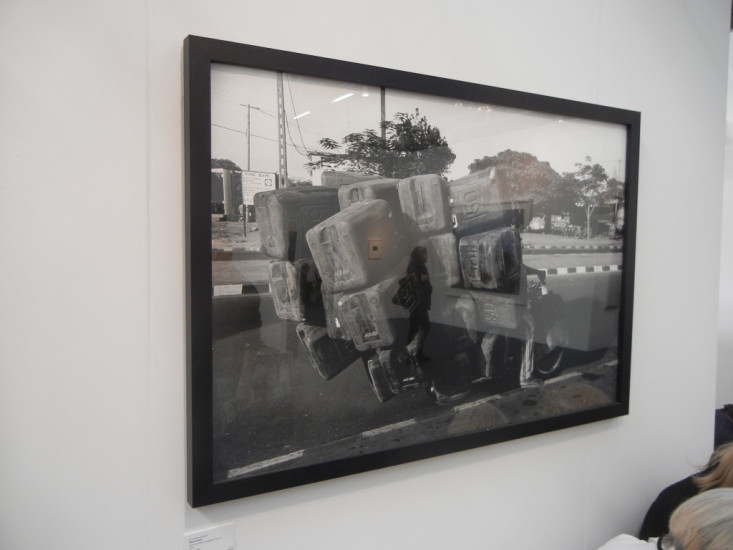 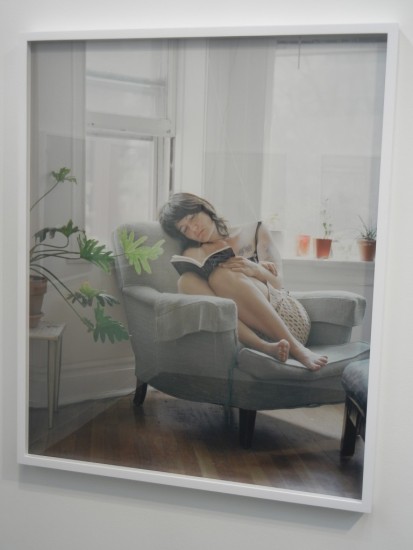 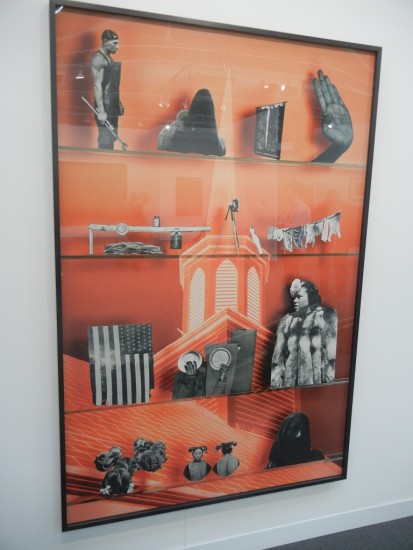 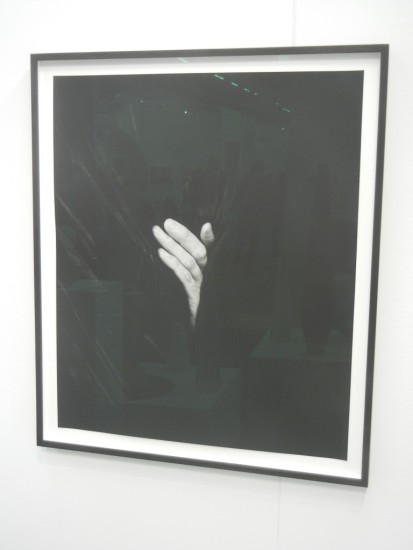 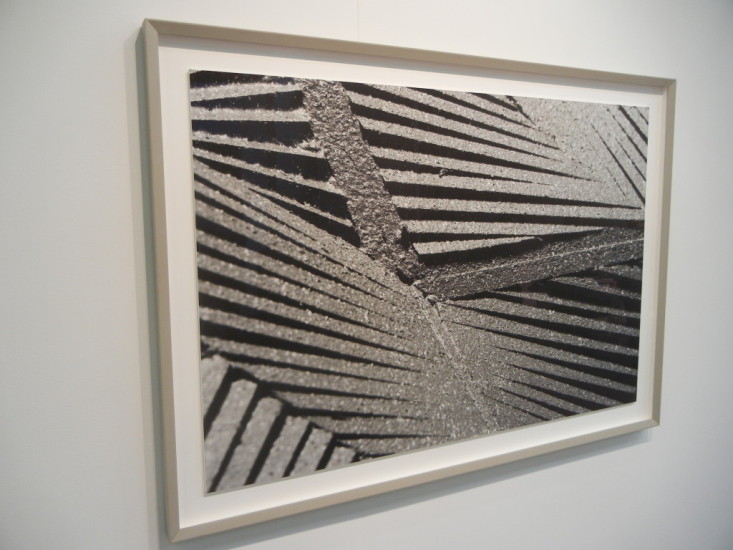 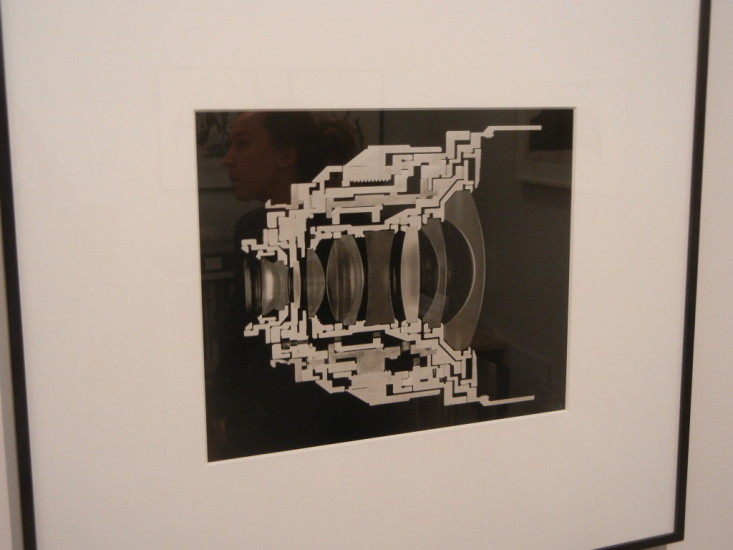 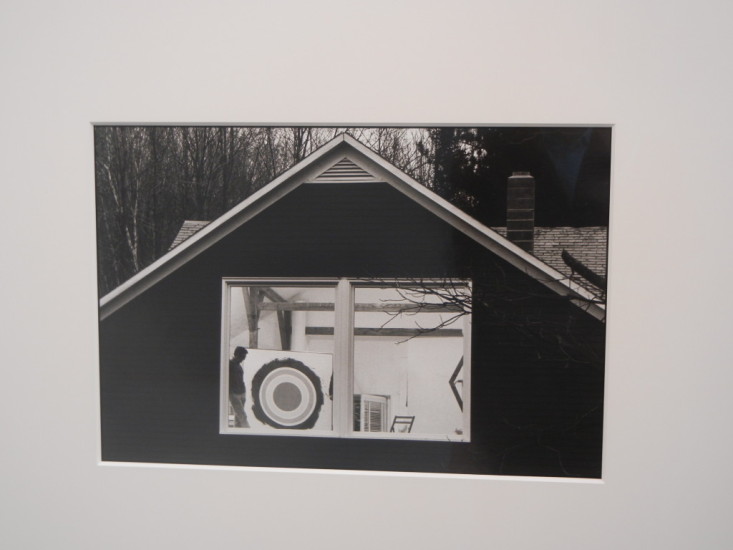 Lehman Maupin (here): This work by Juergen Teller was drawn from an all-over installation of his photographs at the ICA London. Notice the portrait of William Eggleston at the top. Priced at $29000.

Galeria Nara Roesler (here): Smart new work by Vik Muniz, done in concert with MIT scientists. Measuring roughly 1 centimeter on a side (and then enlarged of course), the repeating patterned image is constructed of liver cells and plasma; it is priced at $50000. Another image in the back room shows a castle inscribed on a single grain of sand; Muniz has clearly begun to consider how smallness of scale can be employed creatively.

Edwynn Houk Gallery (here): These are works from Robert Heinecken’s Recto/Verso portfolio, where fashion magazine pages were exposed to light, collapsing the front and back imagery into single frames. Such an elegant idea, with such power for surprising and opportune juxtapositions. The portfolio of 12 images is priced at $95000.

Jack Shainman Gallery (here): Amid the solid photographic works by Weems, Mosse, Nickerson and others on view in this booth, this Hank Willis Thomas chevron arrangement of multi-hued legs still grabbed my attention. Priced at $12000.

Aperture Gallery (here): A classic flattening of planes and geometries, in a spectrum of bright yellows. Lars Tunbjörk, reasonably priced at $950.

Whitechapel Gallery (here): While the shadows in the back of this image give an appearance of double-lit reality, the digital manipulations in the swirling striped red fabric loosen our grip on seeing something specific. Good to see Lucas Blalock’s work at a major fair, priced at $4185.

New Museum Editions (here): Clever, well executed geometries, in a set of 3 images with a special printed box (in this case, use as a mount). Matt Keegan, priced at $3500.

Baró Galeria (here): These black and white architectural photographs have been interrupted with sculptural interventions, ranging from painted blocks to cut cardboard and crumpled paper, creating an echoing of forms and a reimagining of space. Two vertical diptychs, each $9000, by Ricardo Alcaide.

Bruce Silverstein Gallery (here): As always, this booth was a well-edited mix of contemporary gallery artists and vintage material, led by a trio of vintage Karl Blossfeldt florals along the back wall. This delicate single specimen (the other two are up close, all over patterns) was priced at $125000.

Athr Gallery (here): This monumental, wall filling, aerial image of Mecca is the first I have ever seen where the Kaaba is dwarfed by the astonishing hotels and construction that surrounds it. It’s an engrossing spectacle. Ahmed Mater, priced at $49000.

Ani Molnár Gallery (here): This dense installation by Dénes Farkas combines black and white images from the artist’s bedroom with short meditative texts about the process of writing from over 80 poets. Priced at $6000.

October Gallery (here): This booth was a solo show of the works of Romuald Hazoumè, all based on the jerry can smuggling of gasoline in Benin. There are masks made from plastic cans and black yarn, a massive metal motorcycle with glass jar wings, and a few photographs (like this one) of impossible gatherings of cans in motion. Priced at $6400.

Monique Meloche (here): This booth contained a solo installation of Carrie Schneider’s Reading Women. In each image, a woman sits reading a book in her own environment, lit by natural light; the works are quiet, contemplative, and surprisingly engaging. Priced at $4500 each.

Josh Lilley Gallery (here): This work is a physical collage of black and white image cut outs (look for the shadows) placed on custom made glass shelves and ultimately rephotographed. It brings together evocative image fragments and encourages them interact both with neighbors and the backdrop photograph, creating a robust, self contained system for connecting found imagery. Matt Lipps, priced at $15500.

Sprüth Magers (here): While in residency at the Getty, instead of photographing his usual cardboard constructions, Thomas Demand made images of the architectural models of John Lautner. This one is energetically geometric, almost like interlocking fans. Priced at €35000.

David Zwirner (here): Hiding in the back closet in this booth is perhaps the best Christopher Williams image I’ve ever seen. It trades slick commercialism for something more tightly abstract, the black background allowing the intricacies of the sliced cut-away camera parts to become more formal. With a MoMA show coming up, we’ll be seeing even more of his work soon. Priced at $45000.

Galleria Lia Rumma (here): Photographs of artists in their studios are almost a genre of their own, and this is a terrific one. The even angles of the roofline, the bisected rectangular window, the contrast of light and dark, and Ken Noland with a circular painting to unbalance the composition – Ugo Mulas knew what he was doing. Priced at €9000.

Part 2 (the second half) of this report can be found here.