This is Part 5 of our summary report on Paris Photo 2021, focusing on the booths in Section F and the Curiosa and Special Exhibits areas of the fair. 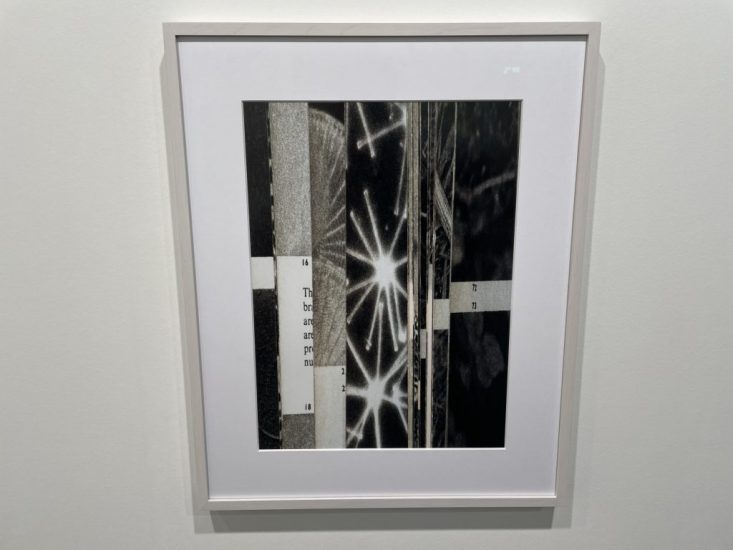 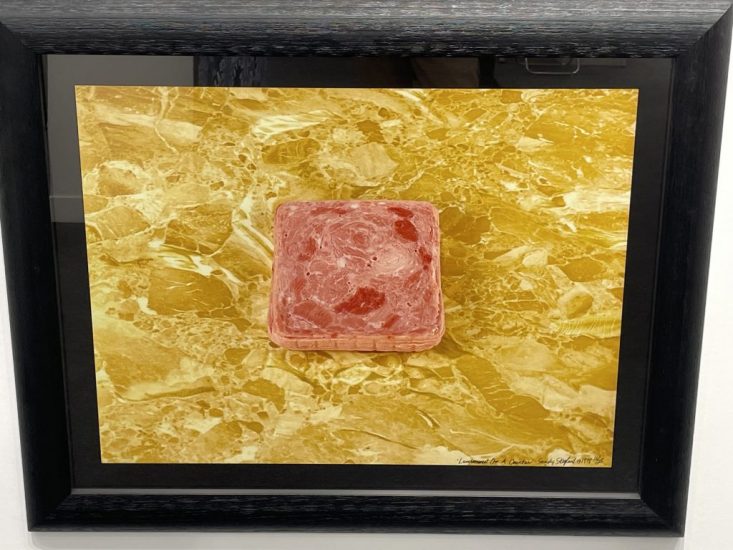 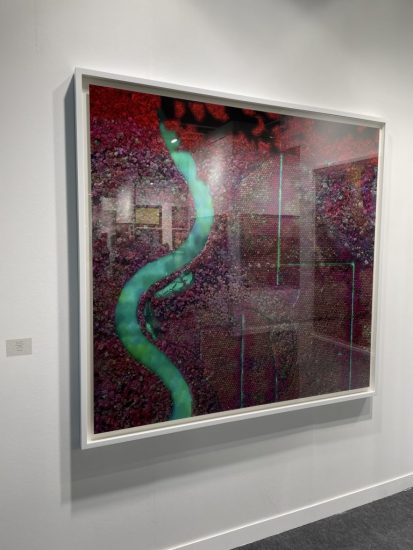 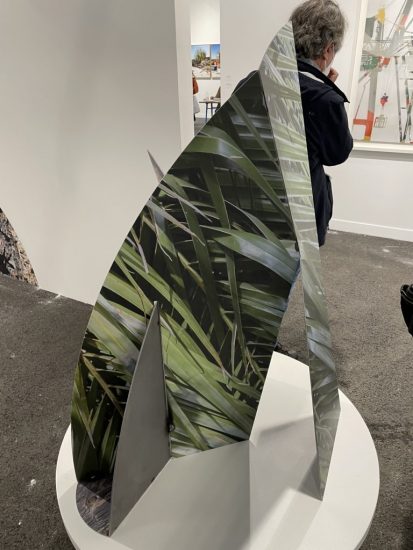 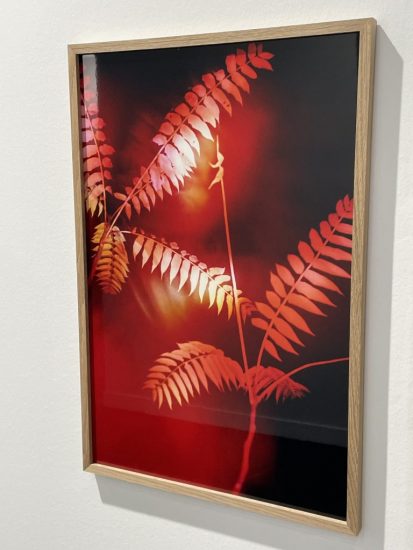 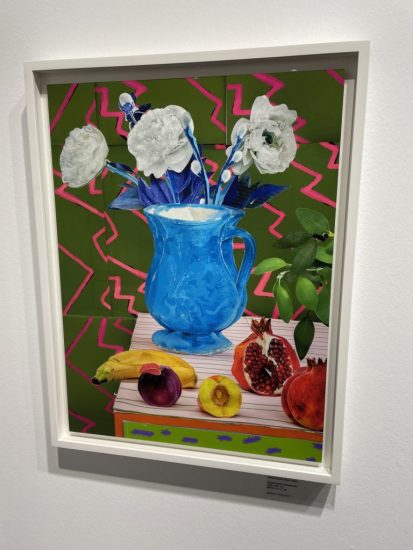 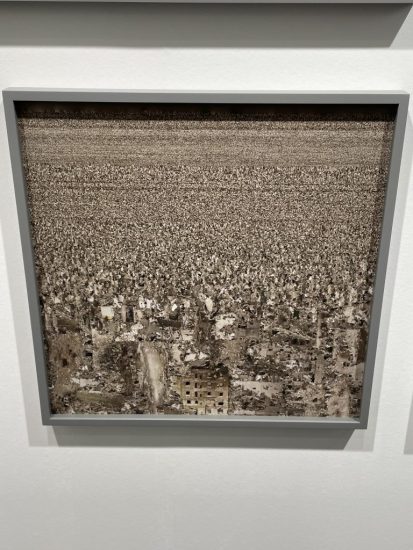 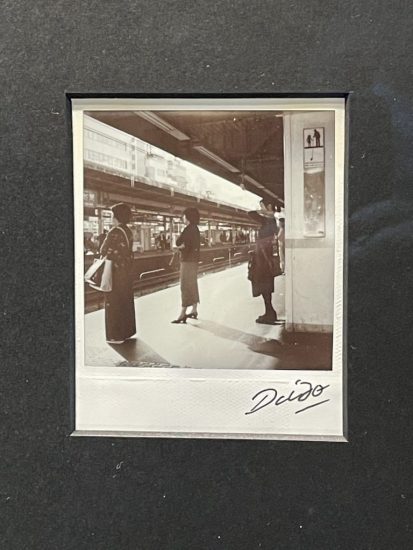 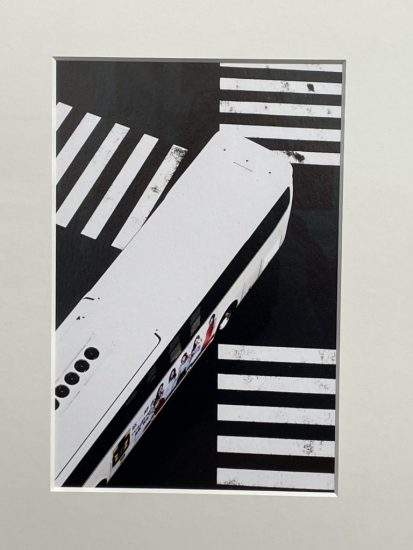 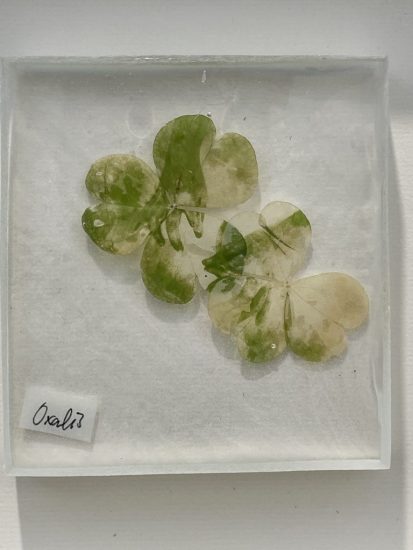 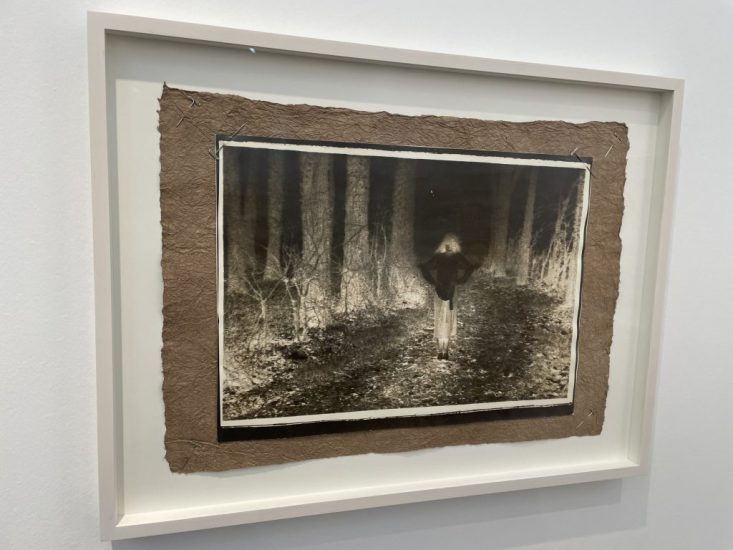 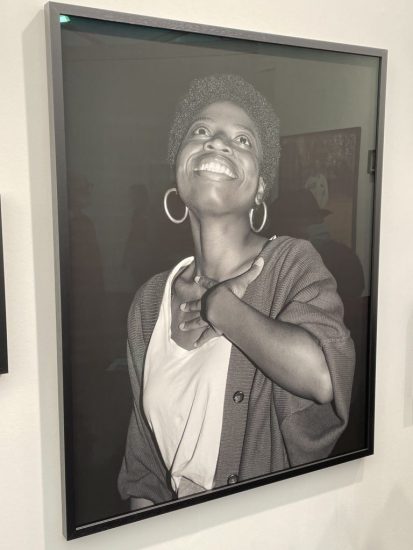 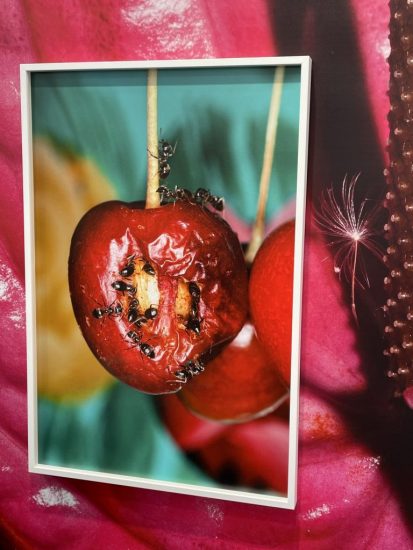 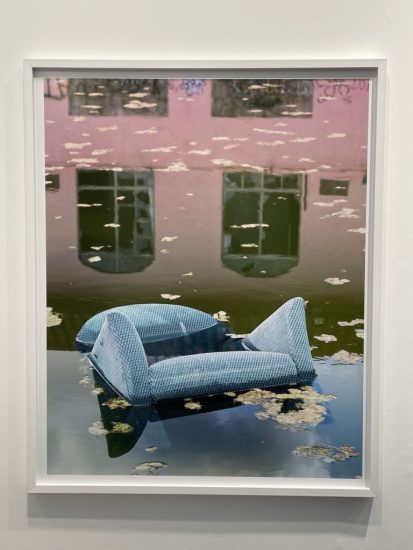 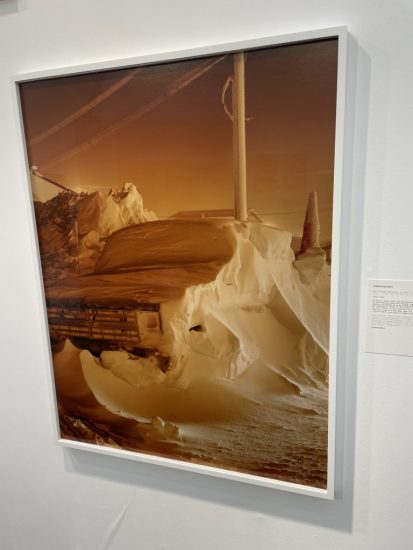 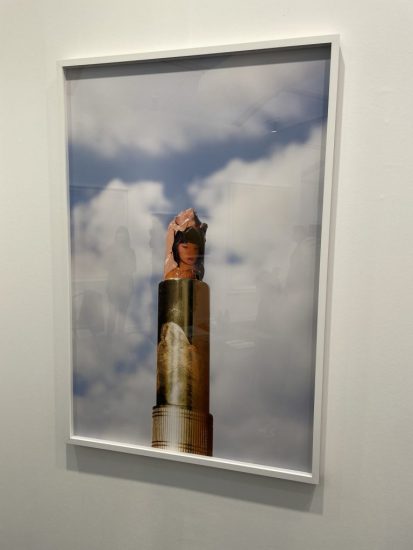 KLEMM’S (here): Erica Baum is continuing to make images in her series “The Naked Eye”, like this 2021 work that discovers plankton diatoms within the feathered pages of a paperback. The verticality of the page edges gives each of these works a structured order, with tiny fragments of imagery appearing here and there like isolated snippets of collage. While these ideas aren’t entirely new at this point, Baum’s innovative compositional framework continues to bear fruit. Priced at $6000.

Paci Contemporary (here): This booth was a solo show of works by Sandy Skoglund. The matching cleverness of Skoglund’s food still lifes from the late 1970s remains durably engaging, as seen in the marbling in this slice of pink luncheon meat and the underlying yellow countertop. Priced at €9500.

Carlier|Gebauer (here): Richard Mosse showed the first part of his recent series “Tristes Tropiques” earlier this year at Jack Shainman Gallery in New York (reviewed here), and he has continued to make additional works in the ongoing series through this year. Here, beyond the obvious inversions of color, the strict grid arrangement of a palm plantation rubs with the natural forms of the surrounding rainforest and a sinuous river, providing a stark contrast of pattern. Priced at $38000.

Galerie Christophe Gaillard (here): This new sculptural photo object by Letha Wilson hosts images of Florida palm leaves and Idaho lava rock formations on either side of the intersection of two angled steel plates. The planes of imagery arc and fold, echoing each other like sails, with the contrasting textures of the photographic imagery creating further energetic dissonance. Priced at $17000.

Galeria Carlos Carvalho (here): The outside walls of this booth featured a number of new works by Marguerite Bornhauser. Saturated colors and formal shadow play are the hallmarks of her aesthetic, and the recent images (collected in a 2021 photobook called “Percevoir”) push those interests further, as in this image, where simple leaf forms are bathed in a flared wash of red. Priced at €2100, in the smaller size.

Huxley-Parlour Gallery (here): This new work by Daniel Gordon was part of recent show at the gallery, the artist’s first solo show in the UK. In a tightly constructed composition of peonies and pomegranates, Gordon hits all of his high points: still life arrangements made from paper image/objects, deliberate doublings and layering of space, and effervescent pops of constructed color. It’s a single image that neatly sums up much of the innovation he has brought to contemporary photography. Priced at €4850.

Galerie Binome (here): Thibault Brunet’s 2019 “Black Boxes” series began with wire service YouTube videos of Aleppo and Damascus, which he converted into JPEG and then modeled in 3D. Depending on the available information, he was able to recreate surreal partial views of damaged streets and buildings, and images like this one capture the “skin” of the cities, with sand and concrete dissolving into a wave of digital static. Priced at €3200.

IBASHO (here): The outside wall of this booth held a selection of Daido Moriyama’s black and white Polaroids from the late 1990s (called “Passage”). This train platform image has a timeless quality, bringing together three generations of Japanese women in a single frame. Priced at €1700.

IBASHO (here): This booth also offered a selection of images from Yoshinori Mizutani’s 2015 series “Rain”, where the white lines of crosswalks are used as graphic elements to frame various downward-looking compositions. Pedestrians with umbrellas, taxis, and even a city bus like this one provide formal options for interpreting the public space. Priced at €1300.

The BMW Art & Culture residency booth featured the scientifically surprising “Pigment Change” project by Almudena Romero. By exposing leaves and plants to varying wavelengths of light, Romero was able to create natural image/objects with images of human hands embedded in the leaves. While larger jungle leaves offered Romero more freedom, these delicate clover leaves seemed a better match to the fragility of the process and the broader precariousness of our warming environment.

The MUUS Collection booth featured a solo presentation of Deborah Turbeville’s late 1970s collages. This work was perhaps the most pleasingly ghoulish of the works on view, with a negative image of a lonely model in the woods, surrounded by both thickets of undergrowth and crinkled crepe paper and pins.

A different selection of Turbeville’s collages was on view in New York in 2019 (reviewed here).

Webber Represents (here): This portrait from Zora J. Murff’s recent series “American Mother, American Father” has a contagious joy that is hard to resist. The woman glows with modest radiance, seeming to acknowledge some invisible adulation but feeling genuinely humbled and honored by that love. Priced at €3300.

TJ Boulting (here): This booth featured a mix of works from Maisie Cousins, some from her terrific 2019 photobook “Rubbish, Dipping sauce, Grass peonie bum.” (reviewed here) and others from a more recent project in Mexico. This image of ants on a rotting cherry finds the provocative point where beauty and disgust intermingle, an area of dissonance Cousins has deliberately (and gleefully) explored in much of her work. Priced at €1300, in a smaller size.

Galerie Caroline O’Breen (here): This blue upholstered chair drowning in murky pastel-reflected water comes from Anastasia Samoylova’s new series “Floridas”. As a follow on to her well-regarded 2019 project “FloodZone” (reviewed here), the new works continue her incisive exploration of the impact of climate change on the state, while expanding her scope to visually wrestle with local complexities and extremes of politics, economics, and tourism. Priced at €5000.

Kominek Gallery (here): This booth was a small solo presentation of Mark Mahaney’s project “Polar Night” (which also took form as an excellent 2019 photobook). The images were taken in Utqiagvik, Alaska, where total darkness stretches for roughly two months in the depths of winter. This image of a snow drifted truck softened by the glow of streetlights feels altogether daunting and otherworldly, the silence of the brutal whiteness engulfing everything in its path. Priced at €7500.

Over the Influence (here): This booth was a selection of recent works by the Taiwanese artist John Yuyi, with each image featuring her face and/or nude body tattooed on various objects: a kitchen knife, a group of cigarettes, a contact lens, and a slab of pork, among others. This work finds her printed on a smashed and fingerprint-smeared lipstick, where identity and glamour have come into rough contact. Priced at €5500.

Fotogalleri Vasli Souza (here): This booth featured a massive hanging pile of images printed on fabric by the Polish photographer Karolina Wojtas, which visitors were encouraged to flip through. The playful works were made in performative collaboration with her younger brother, with scenes of nightmares and sibling battles filling the frames with bright irreverent energy. This framed print finds the brother screaming as if thrown from a plane, seemingly falling out the frame before our very eyes. Priced at €6500.