This is Part 4 of our summary report on Paris Photo 2021, focusing on the booths in Sections D and E of the fair.

Part 1 of the report (here) explains the format used in the detailed slideshow below, provides some background for the discussion, and covers Section A of the fair. Part 2 (which covers Section B) and Part 3 (which covers Section C) follow here and here. It is certainly possible to jump directly into any one of these individual reports, but if you want or need a bit more context, return to Part 1 as a starting point. 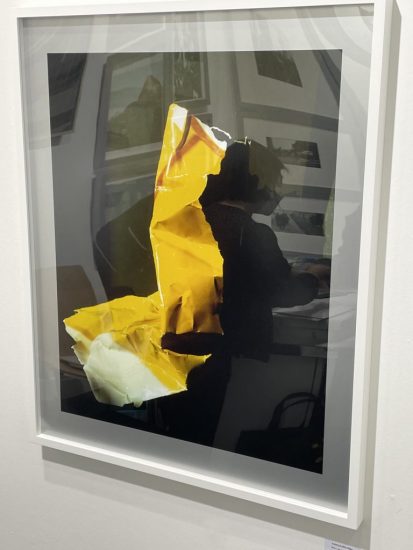 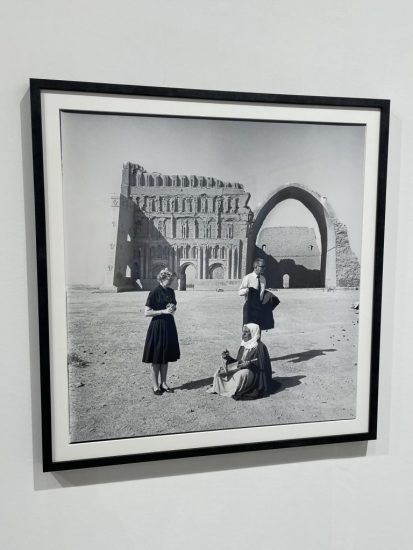 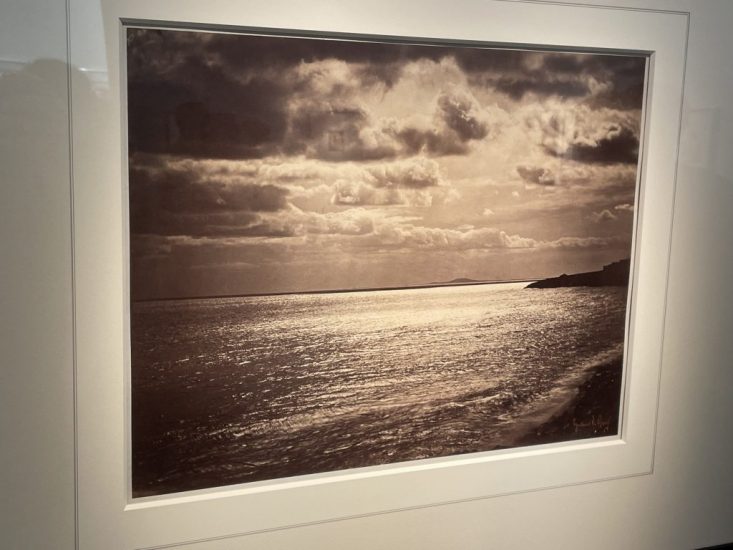 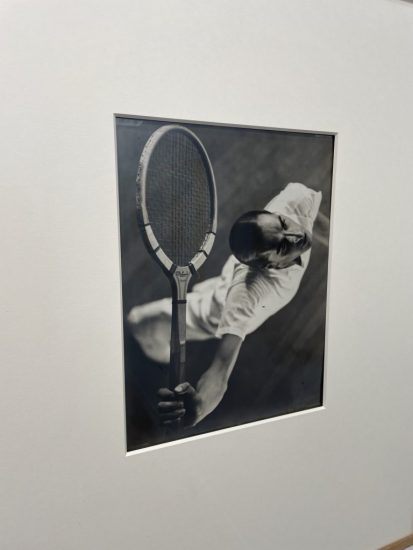 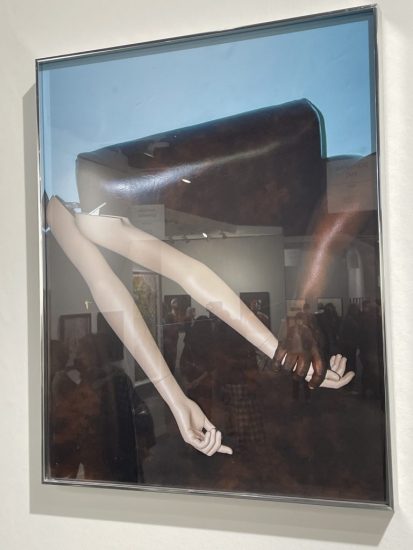 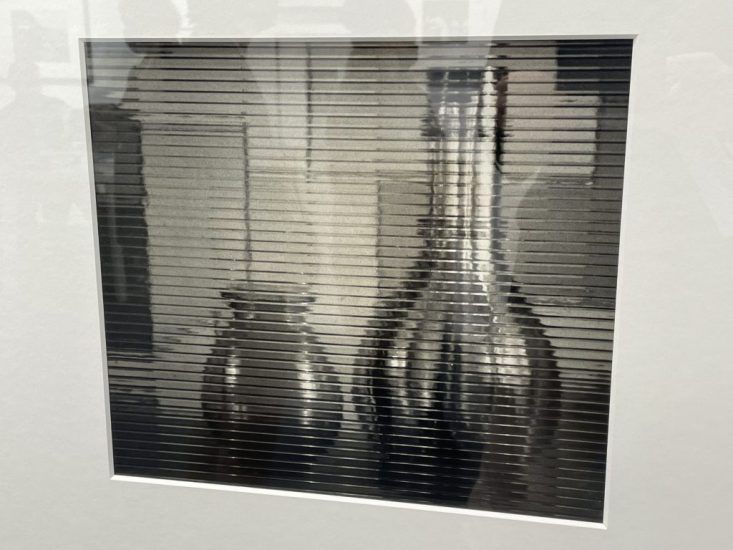 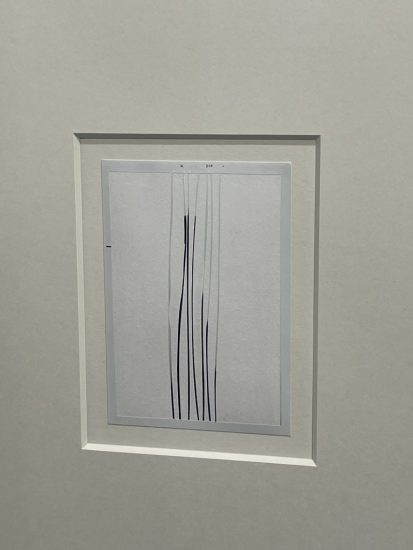 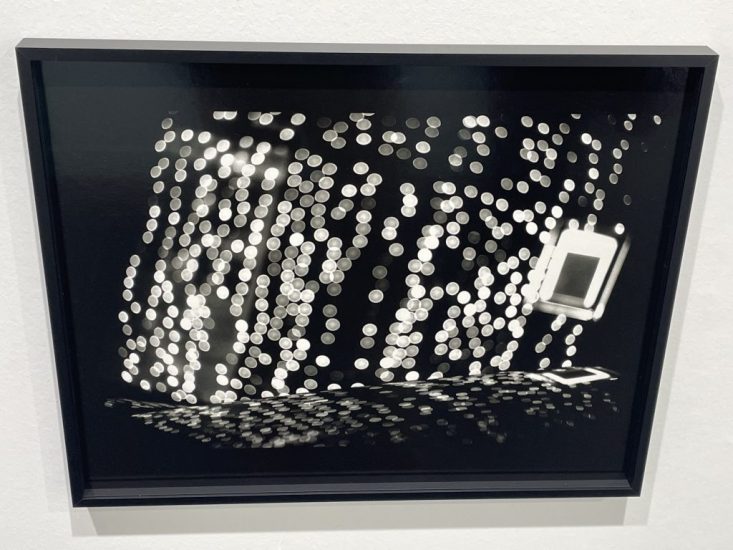 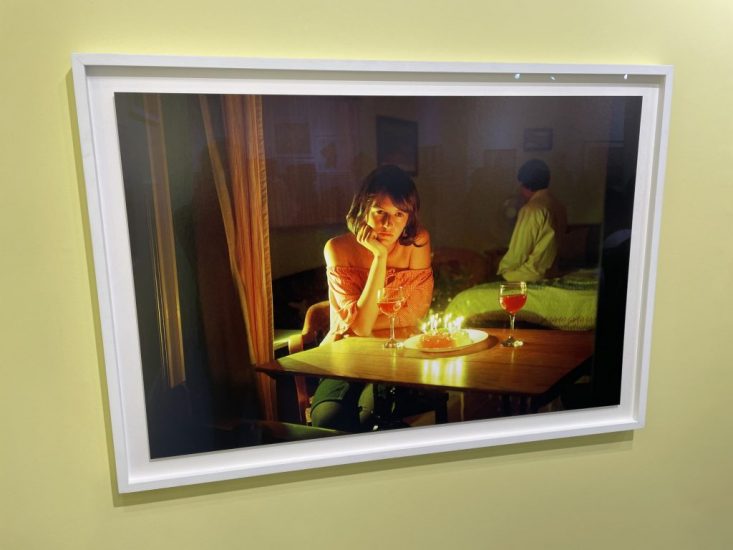 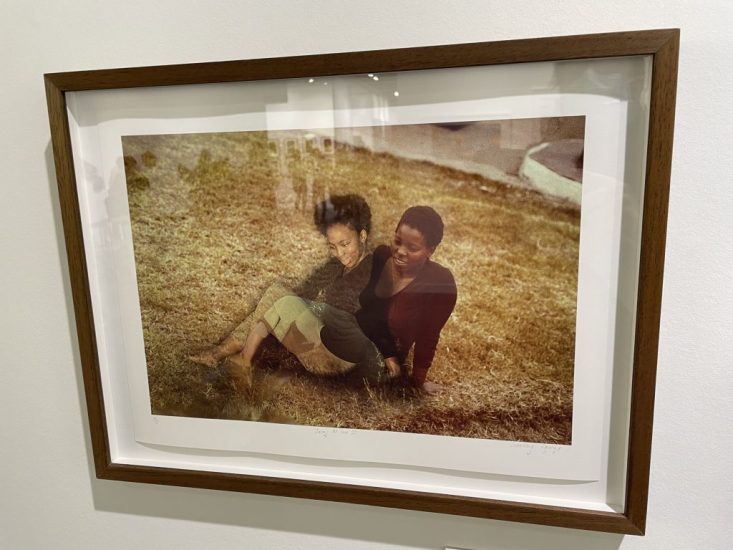 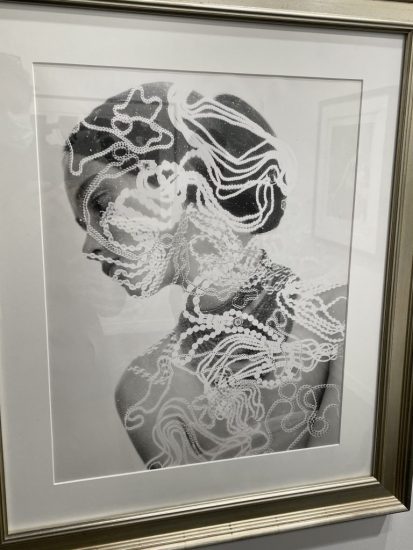 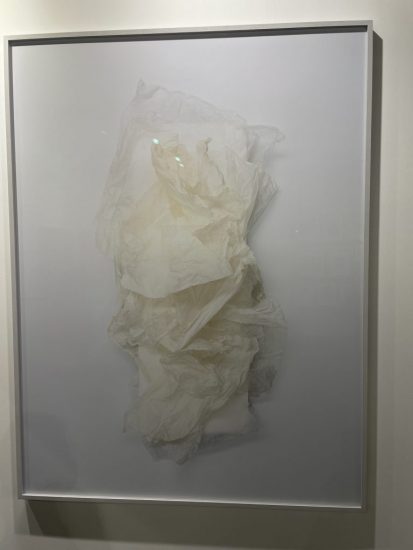 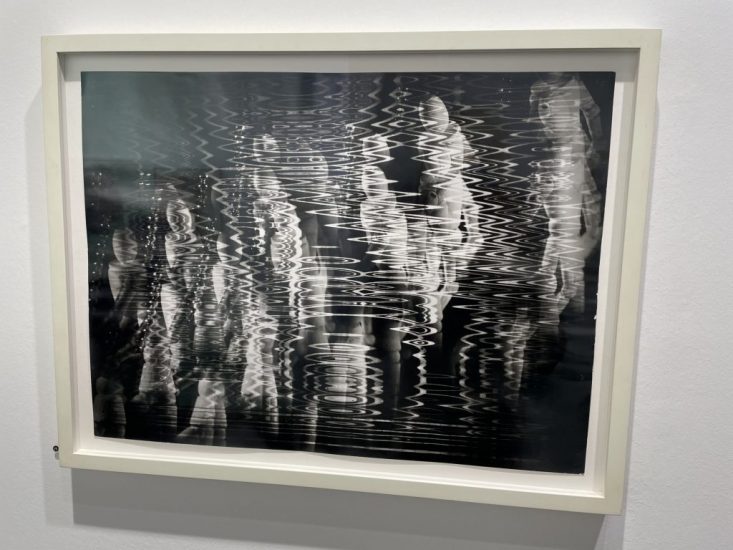 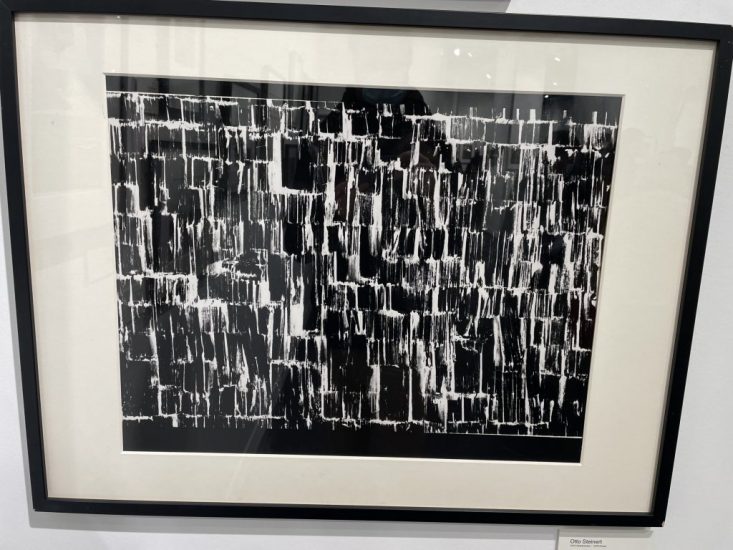 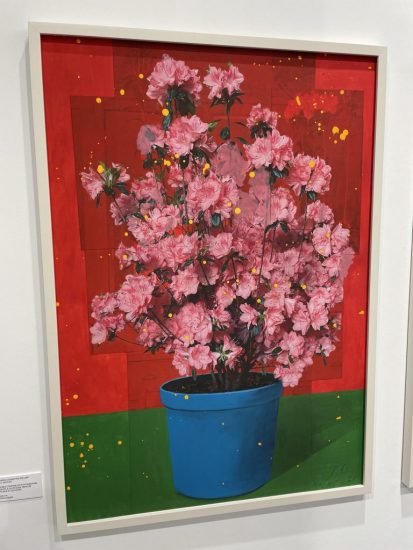 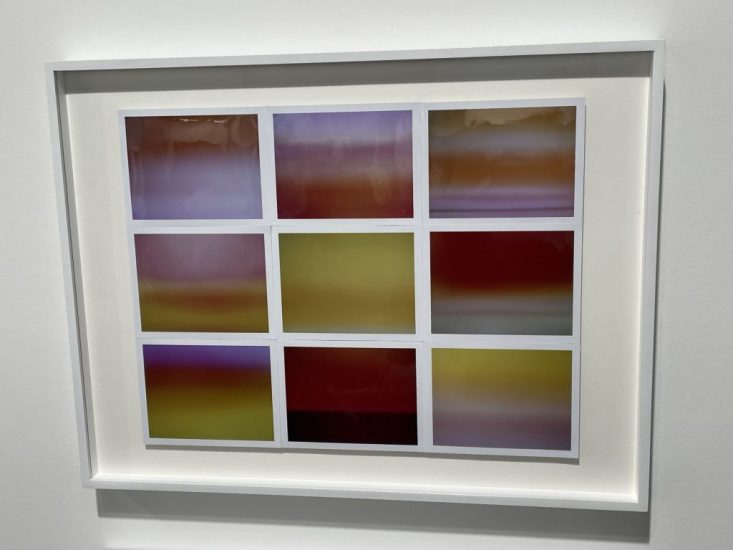 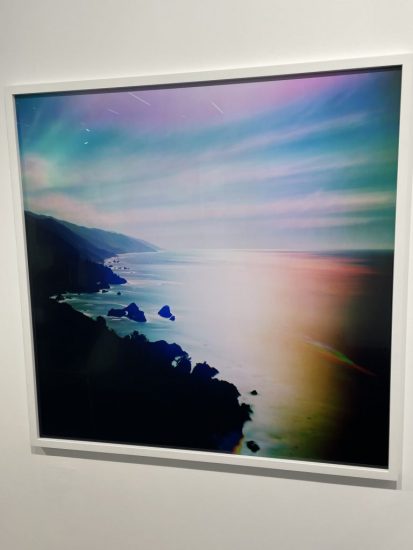 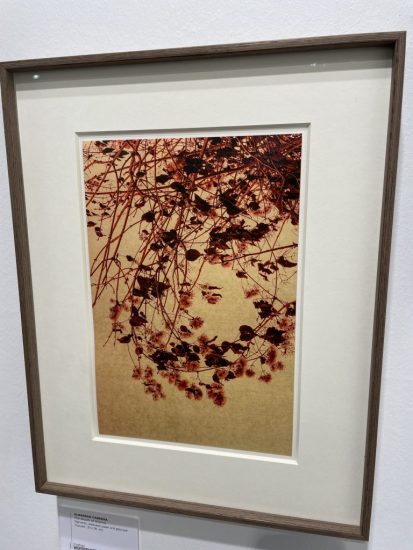 Third Gallery Aya (here): This booth featured a full range of female Japanese photographers, including the early pioneer Eiko Yamazawa. This crumpled paper study from 1982 by Yamazawa turns the glossy yellow surface (and its jagged edge) into something reminiscent of John Chamberlain’s twisted car sculptures. A posthumous print, priced at €8580.

Hans P. Kraus Jr. Fine Photographs (here): Between the dramatic high clouds and the shimmering glow of light on the water, this 1857 seascape by Gustave Le Gray is an undeniable standout. Even without a dark ship form to center our attention (an approach Le Gray used in several other images), this photograph feels lushly and expansively sublime. Price on request, and already sold.

Galerie Gilles Peyroulet & Cie (here): This steep-angled tennis player was photographed by Maurice Tabard in 1930, on a commission for the tennis racquet maker LRichard. It’s a Modernism meets advertising moment, where the radical avant-garde perspective also features the racquet prominently. Priced at €6000.

Augusta Edwards Fine Art (here): The elegant horizontal striping in this 1958 Gaspar Gasparian still life breaks up the objects with tight repetition, like the slats of narrow window blinds or the static of a TV transmission. A vintage print, priced at €26000.

Gasparian was recently included in the Fotoclubismo exhibition at MoMA, reviewed here.

Toluca Fine Art (here): This 2020 work by the Colombian artist Johanna Calle looks like thin stalks or tendrils of plant life. But up close, it becomes clear that Calle has meticulously scraped away the emulsion from most of an anonymous photograph (from 1979), creating the willowy vertical strips. It’s a smart conceptual and process-centric reversal, priced at €7200.

Michael Hoppen Gallery (here): One wall of this booth featured a gathering of new works by the Irish photographer Eamonn Doyle. Made in Dublin during the lockdown, the prints are richly black and contrasty, like this image of a cascade of reflected lights, pushing further toward subtleties of dark ephemeral moods. Priced at €3800.

A new photobook featuring these works, titled “ONE”, has recently been released.

Galerie La Forest Divonne (here): This melancholy celebration was staged by the photographic duo of Elsa & Johanna, in their recent project “Beyond the Shadows”. Made in Calgary, Canada, over the course of just a month, the series includes some 80+ self-portraits and scenes with the two artists playing a range of anonymous fictional characters. Priced at €5650.

Afronova Gallery (here): Lebohang Kganye’s double portraits with vintage images of her mother were made almost a decade ago now, but they continue to resonate well as they age. In each image, the young artist digitally places herself into an image of her mother, creating a ghosting effect with both mother and daughter (often looking or dressed quite alike) in virtually the same poses. The works evoke a number of complex emotions and ideas, including family, connection, heredity, aspiration, admiration, and warm support. Priced at €5000 and already sold.

Staley-Wise Gallery (here): This Herbert Matter work from c1940 is a clever multiple exposure composition, combining a portrait of a woman with jewelry and a tonally-reversed image of jewelry strewn on a table, with the white background making the overlay appear to conform to the contours of the portrait. It’s glamorous, strangely surreal, and impressively inventive. Priced at €13000.

Martin Asbæk Gallery (here): Sometimes extraneous details turn out to be a source of unlikely inspiration, as seen in this new work by the Danish photographer Trine Søndergaard. While working on portraits of women wearing antique headpieces from museum collections, she noticed that the delicate ivory-colored papers used to wrap and protect the artifacts were a potential subject unto themselves. What came next were massively scaled images like this one, that turn the crumpled papers into seductively swirled and gently tactile sculptural forms. Priced at €21500.

Bruce Silverstein Gallery (here): Vintage Karl Blossfeldt prints don’t find their way to the market very often these days, and this particular print from c1920 was as large (at roughly 22×11 inches) as I have ever seen. Astonishing in its detail and lush in its curling textures, it was a vintage marvel worth seeking out. Priced at $135000.

Galerie Françoise Paviot (here): This 1947 mannequin abstraction by Raymond Hains disrupts the repeated bodies with a dizzying squiggle of jagged light. The effect is not only surreal, but something akin to machine age static, like a television transmission dissolving into jittering robotic confusion. Priced at €6500.

Jörg Maaß Kunsthandel (here): This stark Otto Steinert work from 1956 turns a cropped view of Black Forest roof shingles into a darkly powerful abstraction. By inverting the tonalities, the cracks and separations in the shingles show through as white, like insistent vertical scratches. Priced at €30000.

Galerie XII (here): This booth was a solo presentation of new works by Paolo Ventura. Ventura has long been interested in the intersection of photography and painting, and new works like this floral still life introduce further elements of layering and collage. This flowering bush is constructed from dozens of individual photographs interleaved and overpainted, building up into an image that oscillates between plausibly real and expressively approximate. Priced at €13500.

Bigaignon (here): Thomas Paquet isn’t the first photographer to make color abstractions drawn from the rising or setting sun, but this small group of instant film images was quietly impressive nonetheless. His colors fade into hovering blushes of pink and yellow, where horizons dissolve into soft gradients. Priced at €2950 for the set of 9 prints.

Galerie Nikolaus Ruzicska (here): This booth featured a paired show of new work from two generations of German photography, intermingling recent images by Florian Maier-Aichen and Axel Hütte. Maier-Aichen’s 2020 view of Big Sur glows with flared brightness, his color filtered exposures aggregated into a work that collapses the passage of time into misty blurs and misregistrations. Priced at €40000.

Galerie Esther Woerdehoff (here): This booth featured a number of new works by the artist duo Albarrán Cabrera, many featuring various kinds of gold toning or emulsions on gold. In landscapes and nature studies like this one, the golden glow skews the usual color palette, creating an otherworldly natural magic. Priced at €2200.

A new photobook featuring these works, titled “The World’s First Photobook Was Blue”, has recently been released.

Part 5 of this report can be found here.