This is Part 2 of our summary report on Paris Photo 2021, focusing on the booths in Section B of the fair.

Part 1 of the report (here) explains the format used in the detailed slideshow below, provides some background for the discussion, and covers Section A of the fair. It is certainly possible to jump directly into any one of these individual reports, but if you want or need a bit more context, return to Part 1 as a starting point. 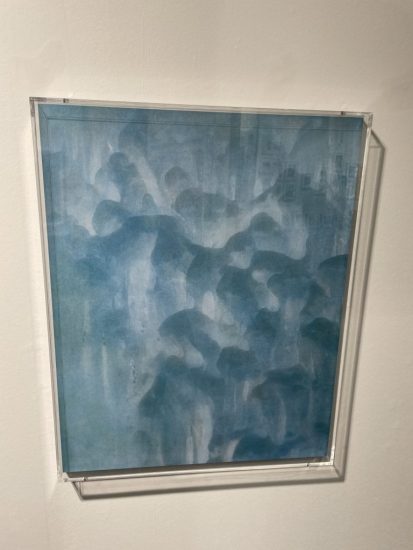 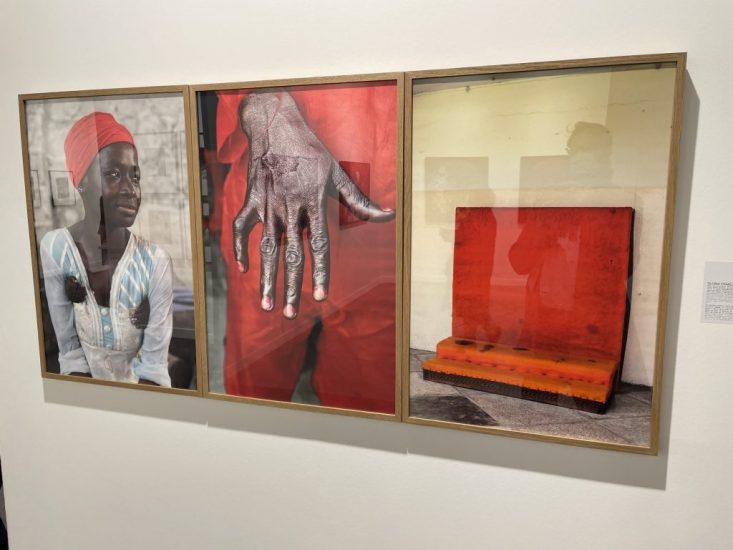 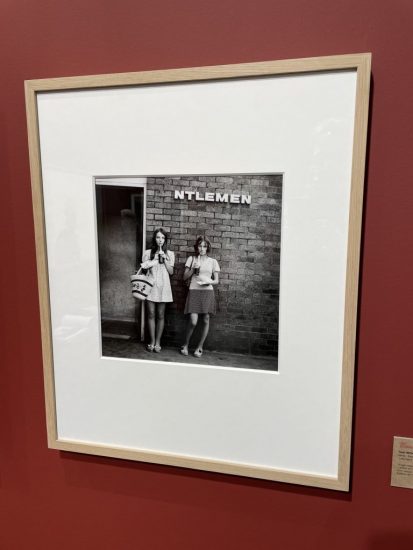 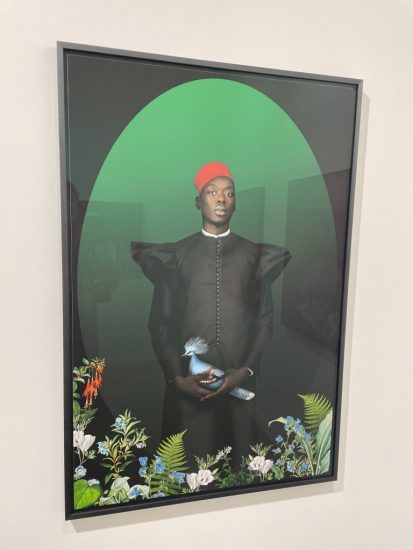 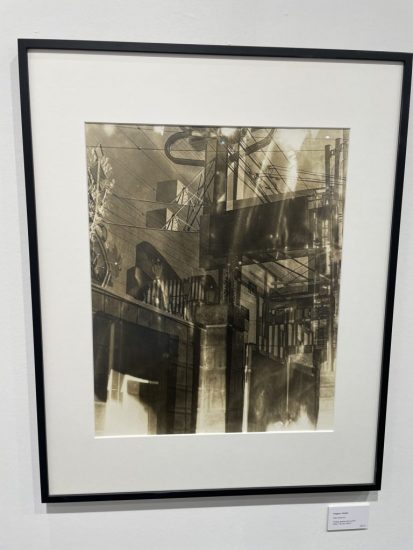 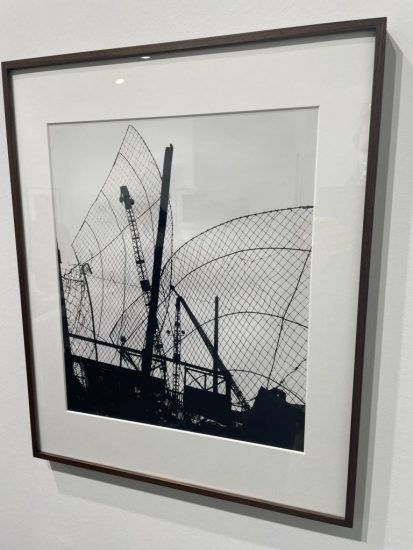 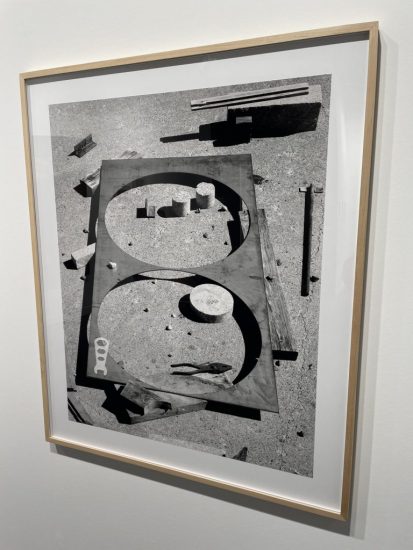 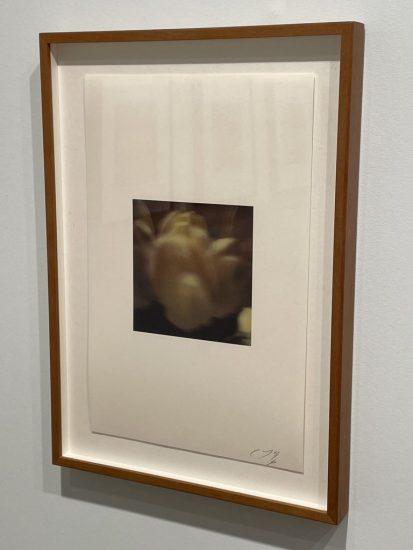 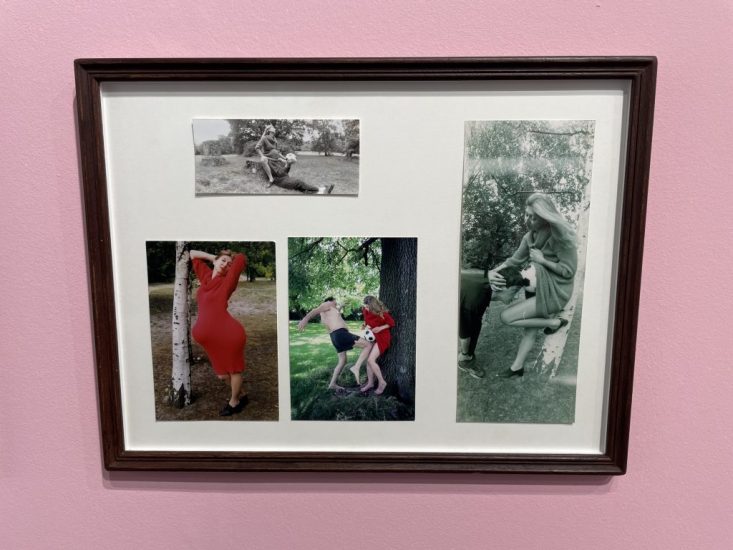 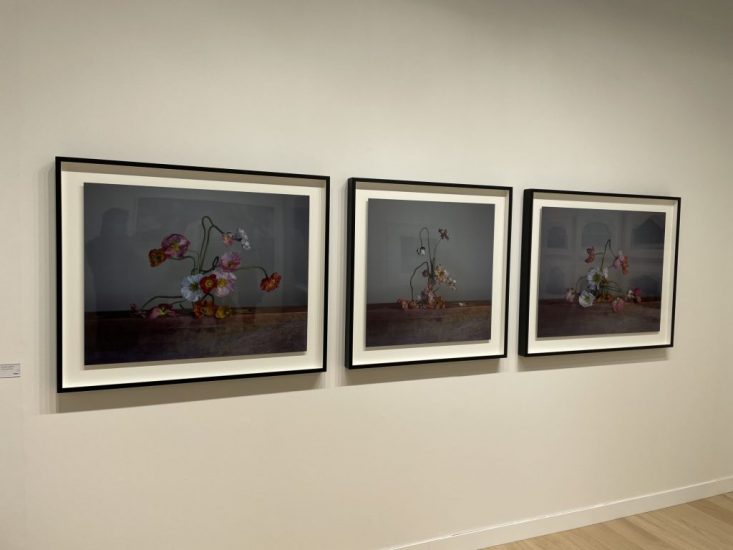 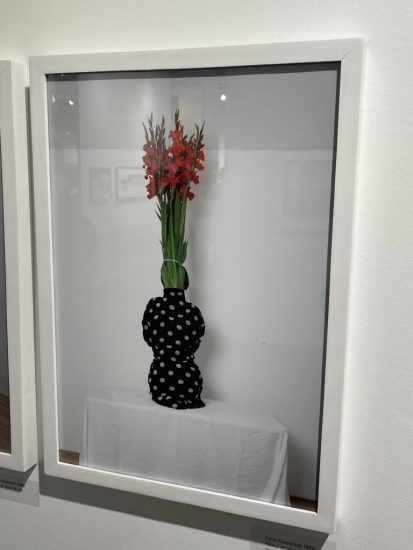 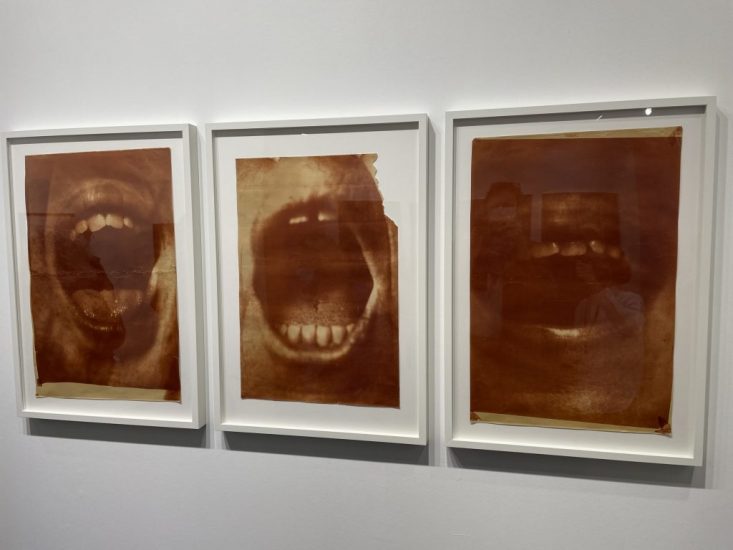 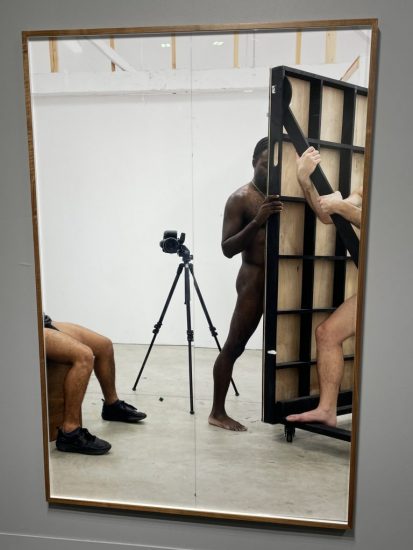 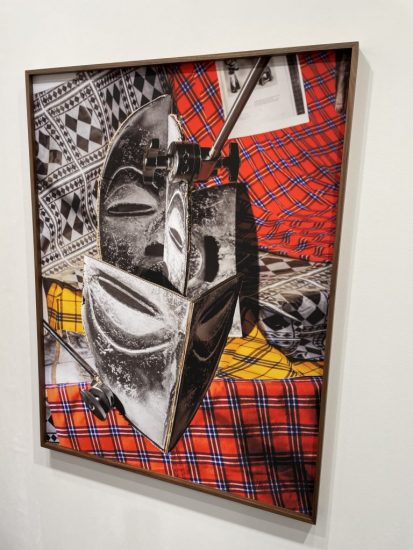 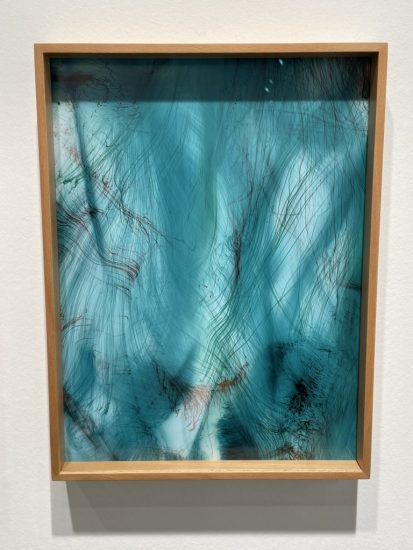 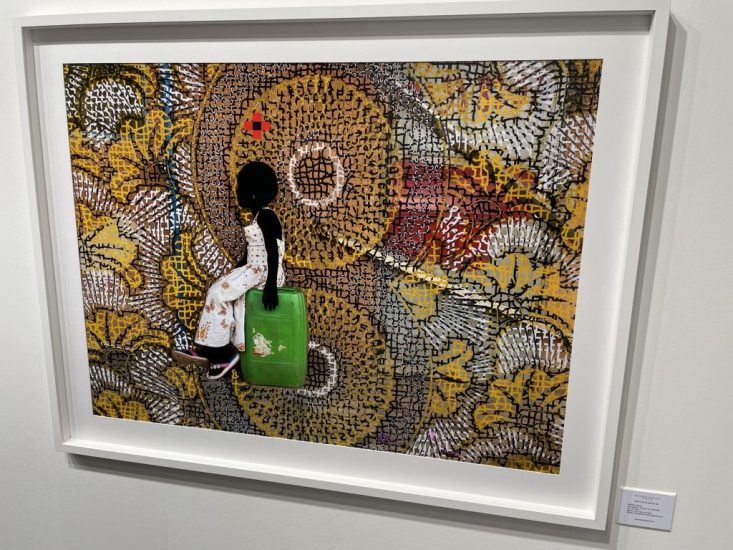 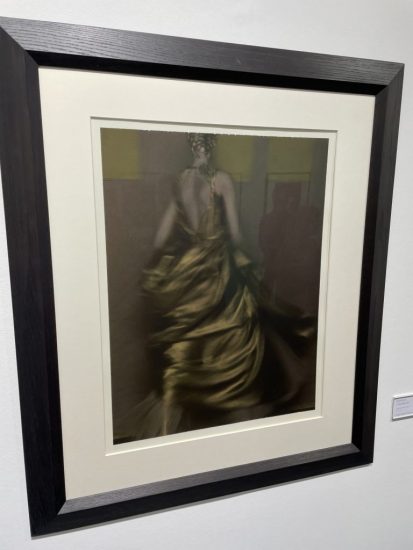 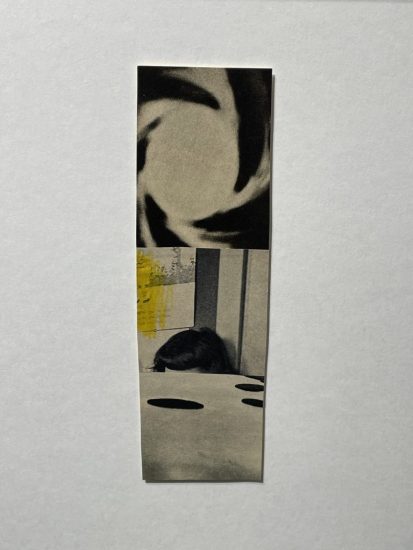 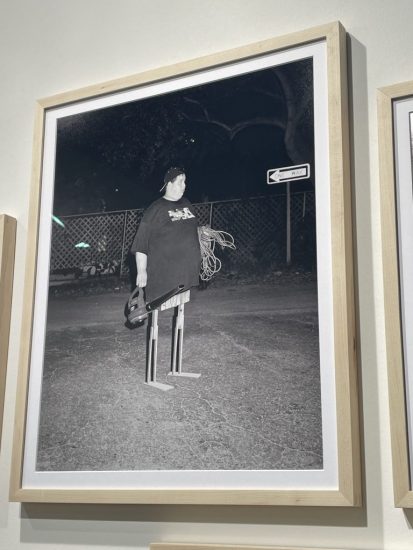 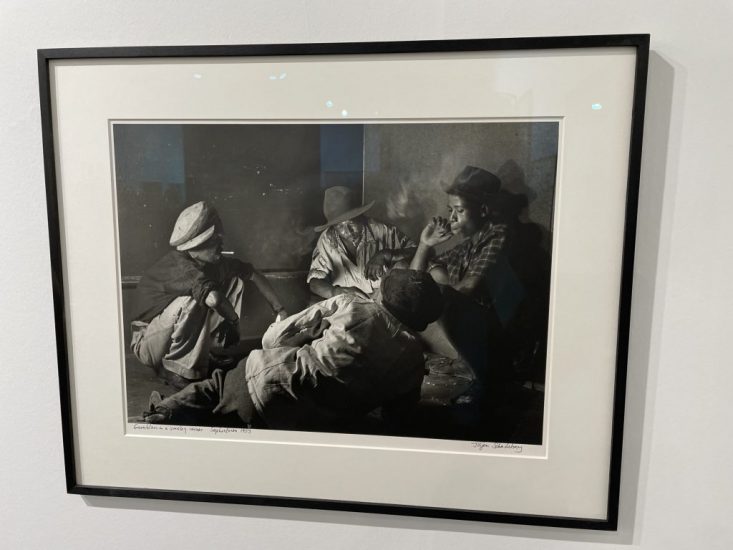 Polka Galerie (here): This ethereal blue image by Vasantha Yogananthan was made on a 2019 commission for the New Yorker to document the ice stupas in Ladakh, India. While a stupa usually houses a Buddhist relic of some kind, these stupas are made in winter and act like an artificial glacier, melting in spring during the planting season and ensuring water for the crops. Yogananthan captured some of the ice blue undulations, and then printed the image using the Fresson process, amplifying the soft textural surfaces. Priced at €6500.

We have reviewed several of the photobooks that make up Yogananthan’s project A Myth of Two Souls, most recently Afterlife from 2020 (here).

RocioSantacruz (here): This triptych by Gloria Oyarzabal comes from her superlative 2020 photobook project Woman Go No’Gree (reviewed here). It brings together a mother, a powerful hand, and an empty queen’s throne platform, connecting layers of stories and roles defining strong, confident women. Priced at €1800 for each of the three prints.

Galerie Sit Down (here): This early Tom Wood photograph from 1973 was made in Oxford, before Wood moved to Liverpool. It’s a delightfully offbeat image of youth, with the two girls drinking their sodas outside the men’s toilets. A vintage print, priced at €8650.

Galerie MAGNIN-A (here): This booth was a solo presentation of Omar Victor Diop’s new self-portrait series “Allegoria”. In each image, Diop is posed with various graphic elements, like the bird and floral greenery in this image. Like Kehinde Wiley’s portraits, these works play with and react to the conventions of portraiture, rebuilding the formally mannered aesthetics into something fresh and new. Priced at €10000.

MEM (here): Shigeru Onishi was a mathematician before he was a photographer, and his training led him to try to upend the idea that photography captures a single moment. In this 1950s work, he uses unconventionally expressive darkroom techniques to disrupt a multiple exposure/montage, turning the signage of the Japanese streets into a layered geometric puzzle energized by areas of brightness. Priced at €16000.

MEM (here): Heihachiro Sakai was a member of the Naniwa Photography Club in post-war Osaka, and this 1959 image finds him with mixed emotions about the industrial rebuilding of the city taking place. Dark cranes reach into the sky surrounded by bleak silhouetted fencing, creating a tensely moody high contrast composition. Priced at €10000.

Porter’s more recent work was also on view in the booth, which we reviewed in New York in 2020 (here).

Gagosian Gallery (here): Cy Twombly’s enlarged Polaroids filled the walls in this full booth survey, with fruits, flowers, and other still life elements dominating the subject matter. Twombly’s photographic prints are unusually soft and tactile, breaking the recognizable petals and rinds down into washes and blurs of indistinct painterly color. Priced at $50000 and already sold.

A broader review of Twombly’s photography, as seen in a 2012 gallery show at Gagosian, can be found here.

Galerie Suzanne Tarasieve (here): This group of images by Boris Mikhailov captured the bawdy playfulness that enlivens much of his work. Using his wife Vita, her stretchy dress, and a soccer ball as improvised props, he stages a series of provocatively ridiculous moments that provide a much needed release from the everyday constraints and tensions of Soviet life. Priced at €12000.

Fraenkel Gallery (here): This 2020 series of three images by Richard Learoyd finds the British artist exploring wilting floral forms during the recent lockdowns. His highly detailed approach leads to images that feel astonishingly precise, even as the mounting decay pulls the blossoms into sinuously bent and drooped forms. Priced at $150000 for all three parts.

Trapéz Gallery (here): Csilla Klenyánszki’s self-published 2019 photobook Pillars of Home (reviewed here) captured the artist’s improvisational efforts to make thirty-minute domestic sculptures while her young child was taking a nap. Her results, as seen in this example with tall flowers tucked into her blouse, were consistently playful and innovative. Priced at €1500.

Rolf Art (here): While we have featured the work of Graciela Sacco in previous art fair posts (her open mouth stamps in particular), these original posters from the early 1990s were worth considering once again. Manually wheatpasted to various urban walls, the posters provided a boldly visual intervention (she preferred the word “interference”) in the flow of everyday life, and when overlaid atop political advertising, became even more provocative. In the context of our current masked COVID world, her open mouth motif takes on yet another layer of potential meaning. Priced at €15000 each.

Document (here): This booth featured a selection of new work by Paul Mpagi Sepuya. While most of Sepuya’s recent work relies on combinations of rephotography, mirrors, and other physical studio interventions to create his layered illusions, a few of the recent works introduce a movable wall into the artist’s aesthetic toolbox. In this image, we see bodies both “in front of” and “behind” the wall, which, when mirrored, create intriguing rearrangements and distortions of physical space. Priced at $14000.

Yancey Richardson (here): This new work by David Alekhuogie wasn’t in his show earlier this year (reviewed here), but it builds on and extends many of the ideas presented there. This image has more planes of intersecting mask reproductions, and more layers of competing fabrics than earlier works, giving it a heightened sense of three dimensional possibility. Priced at $9000.

Galerie Melanie Rio-Fluency (here): Edgar Martins calls his new darkroom-based works “lipographs”. They seem to have been made with waves and patterns of light drawn across the paper, in a manner similar to Mariah Robertson’s experiments. In this work, waves of aqua blue seem to tumble and undulate, as thin red and green tendrils gather in scratchy clusters. Priced at €4800.

Jackson Fine Art (here): The images in Saidou Dicko’s series “The Shadowed People” turn the people in his photographs into dark silhouettes. Starting with photographs made both in Paris and in his home country of Burkina Faso, he then digitally layers a netting of fabric across the backdrop and hand paints the body parts an enveloping black. The result is something akin to collage, where layered juxtapositions of setting and texture create an allusive environment and the overpainting universalizes the sitters. Priced at $5000.

Galerie Camera Obscura (here): Very few photographers are using the painstaking carbon process anymore (much less making the prints themselves), but this luminous Sarah Moon print shows why carbon can still be aesthetically effective. Moon’s fashion image has an indistinct but seductive golden shimmer, the carbon print delivering a particularly rich and glamorously tactile surface well matched to the content of the image. Priced at €25400.

Gallery Fifty One (here): After exploring the collage form for a number of years now, Katrien De Blauwer continues to find ways to unlock expressive thematic associations. In this collage inspired by dreams, swirling dots and circles bookend the top of a woman’s head, with a young girl with black shoes hovering in the air, bathed in a splash of yellow. De Blauwer’s combinations seem effortlessly simple, yet consistently deliver unexpectedly sophisticated moods and connections. Priced at €1600.

V1 Gallery (here): Asger Carlsen’s flash lit young man with a leaf blower seems hopelessly mundane, that is until we realize that his legs and feet are puzzlingly made of wood. Carlsen has built his artistic career by pushing the surreal edges of digital manipulation, creating images like this one (from his series “Wrong”) that leave us deliberately, but entrancingly, unsettled. Priced at €2500.

Bonne Espérance Gallery (here): This 1953 image by Jürgen Schadeberg turns a group of gamblers into a timeless scene of chiaroscuro faces. Schedeberg is best known for his images of 1950s South Africa, particularly in Sofiatown, a black cultural hub that was destroyed under apartheid. A modern print, priced at €4000.