After more than a year of pandemic-induced isolation and hiatus, Paris Photo made its return to the photo calendar this week with a surprising amount of upbeat enthusiasm and energy. With the French COVID pass meticulously checked at the entry gate, there was no vaccination fuss or controversy, and inside the crowd was largely masked but comfortable and convivial. It seemed that nearly every booth and aisle was filled with people who were happy to see each other, to catch up, and to finally get back to looking closely at photography again. I, for one, was certainly grateful to be back.

Relocated to a temporary convention space on the expansive Champs de Mars (while the Grand Palais is being renovated), the fair’s physical area has been reoriented into a thick T shape, in contrast to the previous broad rectangle. The booths themselves are generally the same as always (with much less soaring overhead grandeur and diffuse sunlight), but the flow is slightly different, with the galleries, special exhibits, and book booths in the center of the T feeling a bit separated from those in the main crossbar.

Likely due to the ongoing constraints and challenges posed by the pandemic, the gallery mix in this return edition of Paris Photo is tilted a bit more toward European galleries, with slightly fewer representatives from Asia, South America, and North America than in previous years. But from my personal perspective as a visitor from New York, this shift was somewhat welcome, as it brings additional work outside the flow of the US art market into better view.

More often than in the past, the individual booth plans chosen by exhibitors in the main part of the fair also seem to reflect an effort at straightforward reintroduction, with safer samplers and reprises of recent gallery shows seemingly arranged to remind collectors of gallery programs, stables, and points of view. In a sense, we are all going through a process of reconnecting, and many booths felt overtly designed to facilitate that conservative, first step back, re-meeting process, rather than taking more risk. Likely that pendulum will eventually swing back toward more innovation, when gallery owners can more comfortably predictably a successful economic outcome at the fair; but for now, in the slow pandemic rebuild, we walk before we run.

The slideshow below, and the ones that follow (for a total of 5 parts), gathers together some of the highlights from this year’s fair, loosely tracking my path through the aisles, starting with Section A (nearest to Place Joffre) and working through to Section F and the Curiosa and Special Exhibits areas in the center and bottom of the T. As always, this mix interleaves contemporary and vintage photography, from fresh work made in the last year or two to rediscovered vintage rarities and overlooked photographic wonders. Each photograph (or group of photographs) in the slideshow is annotated with the linked gallery name, the artist’s name, some discussion of the work itself, and the price (in some cases, when a work was already sold or on reserve, the price was unavailable). 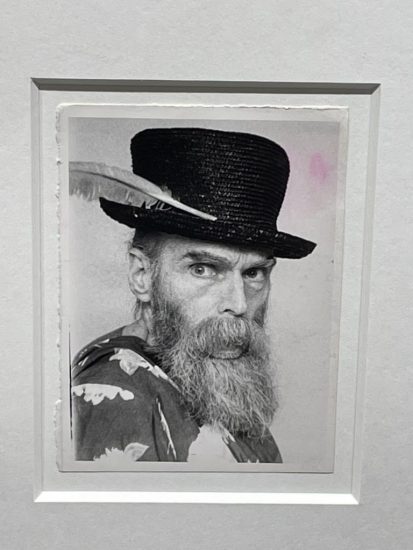 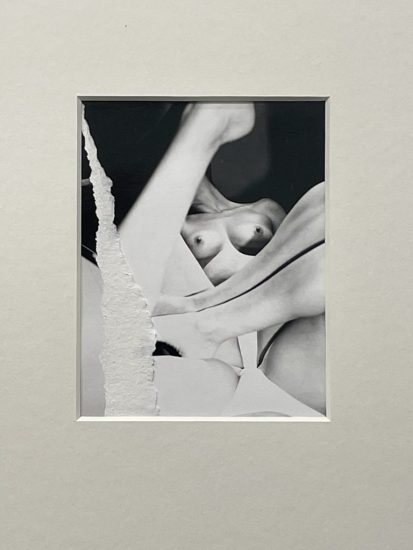 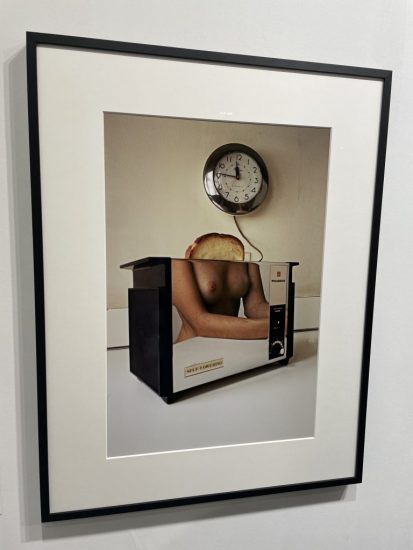 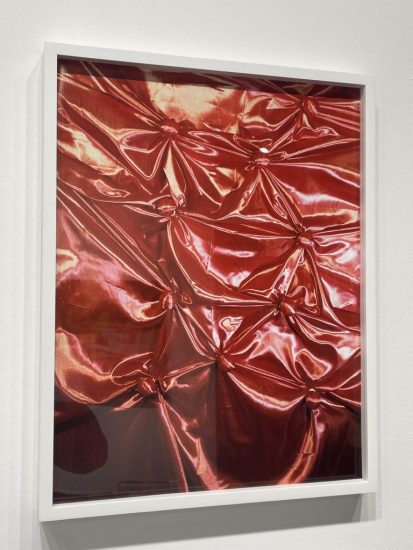 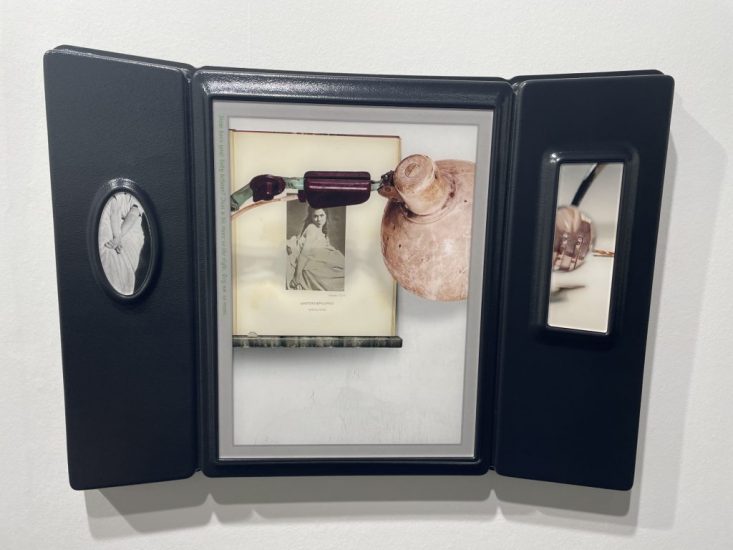 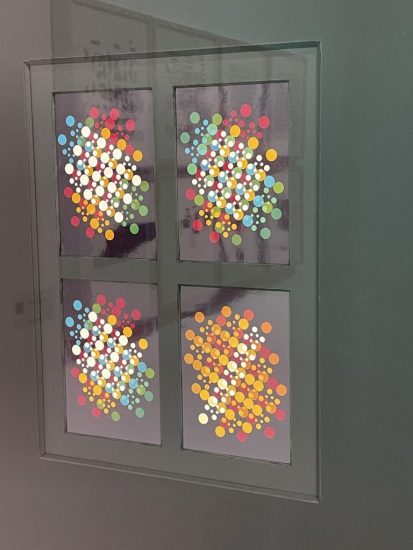 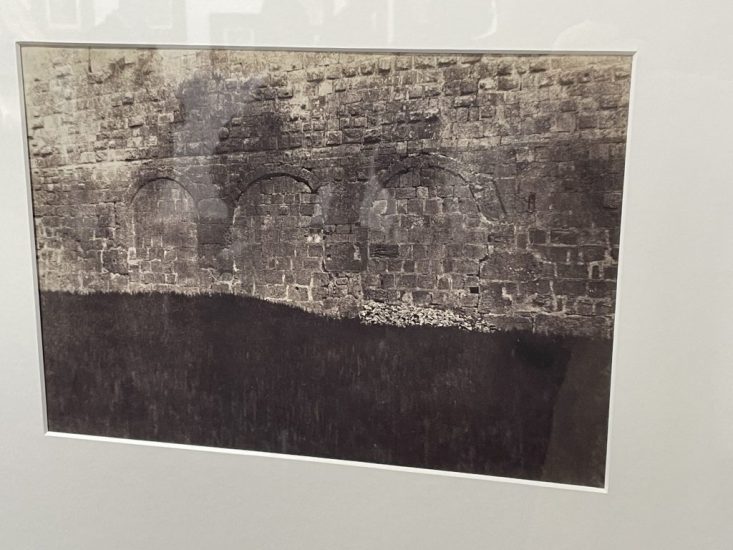 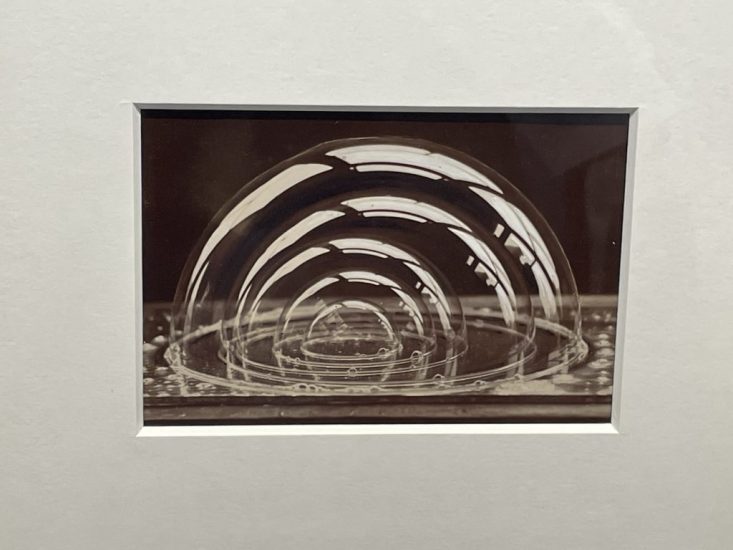 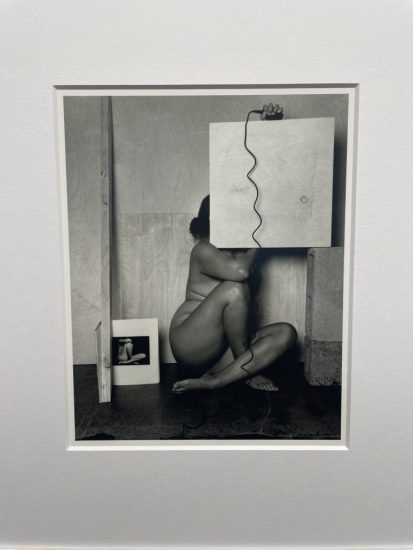 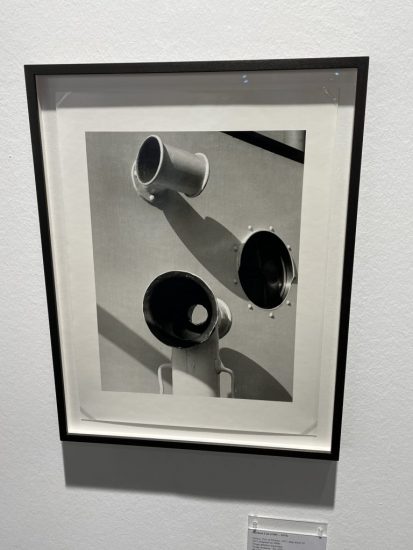 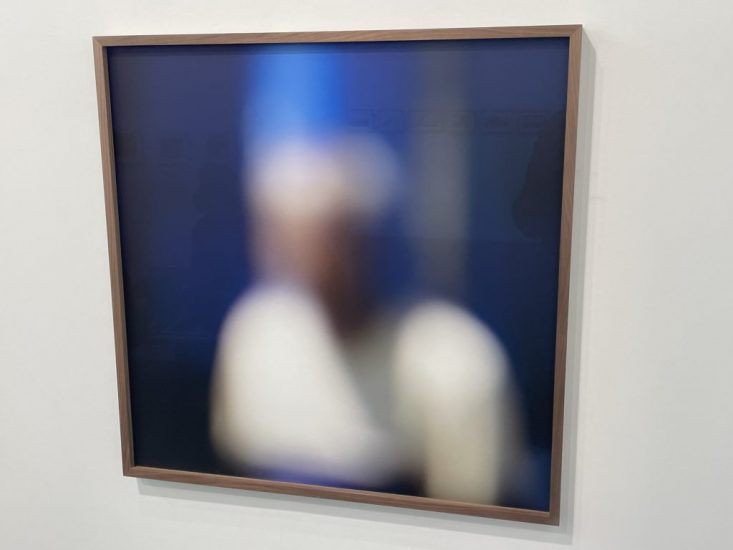 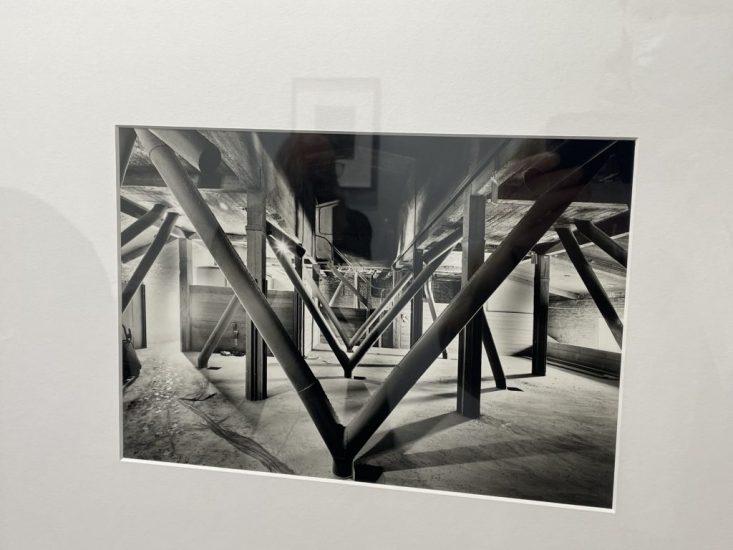 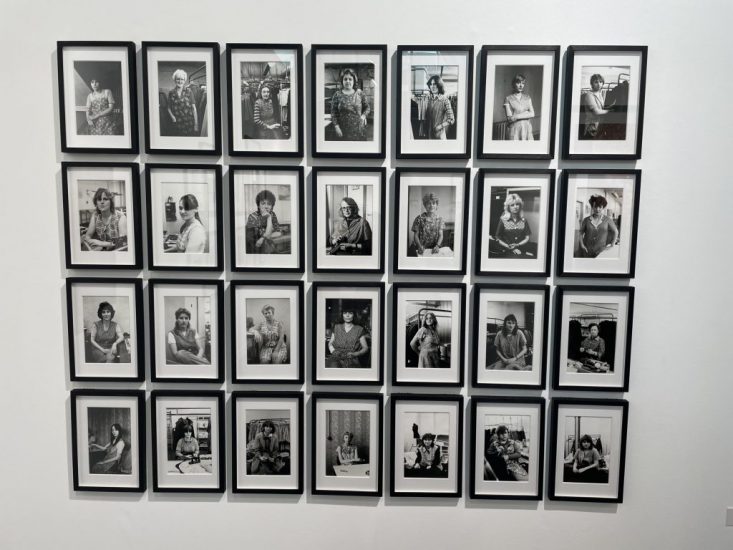 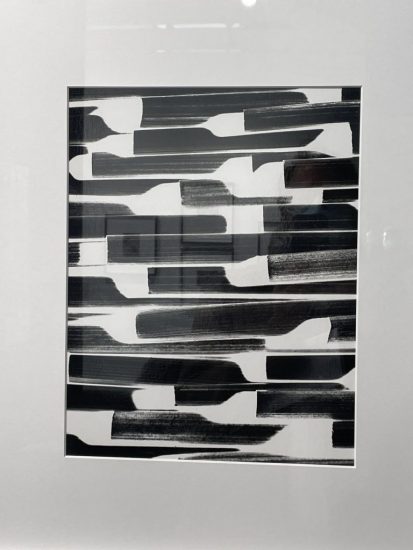 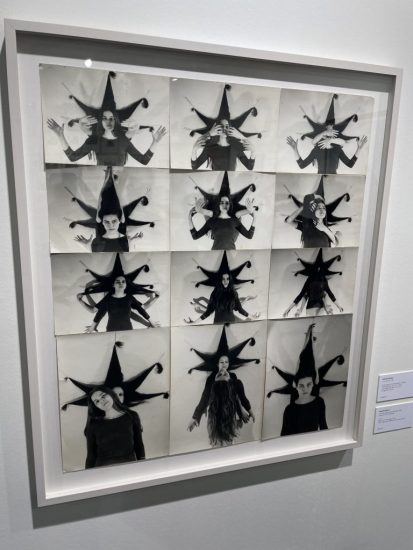 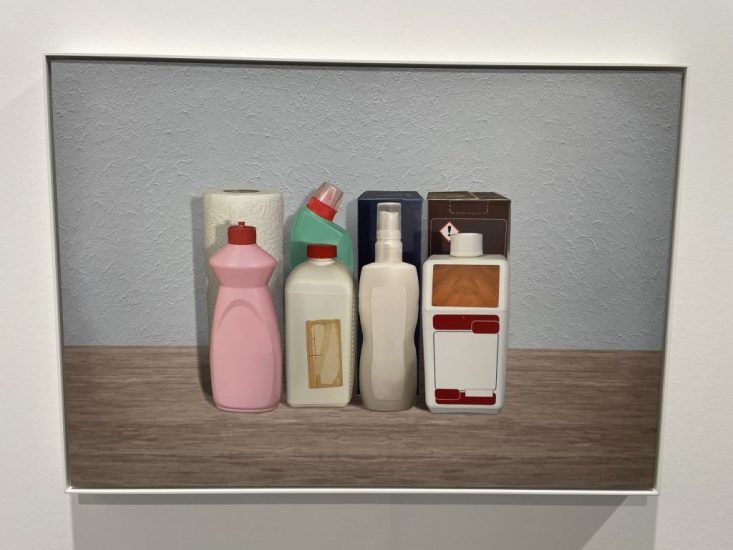 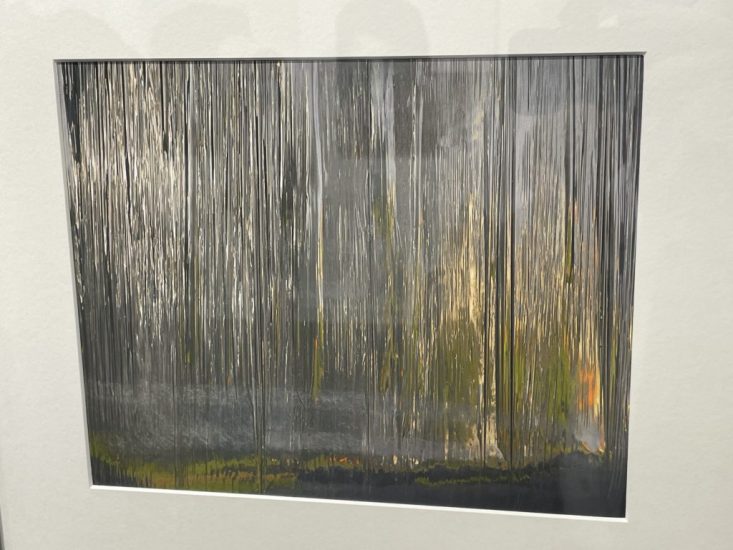 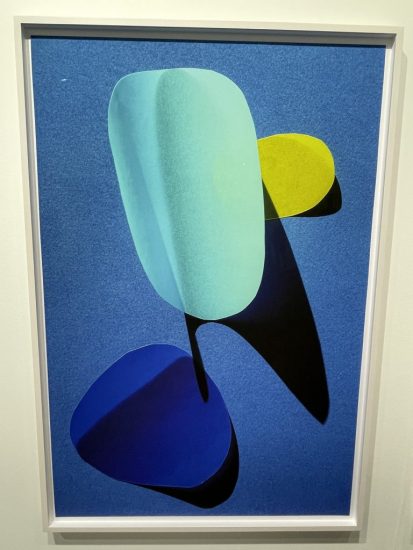 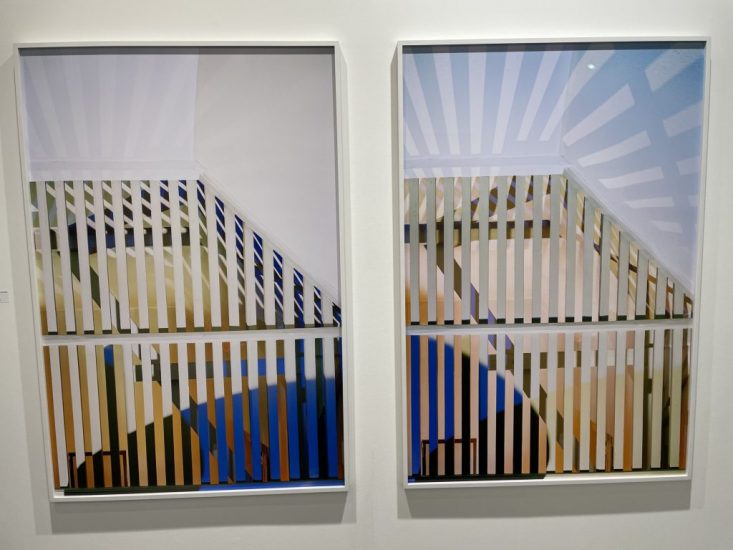 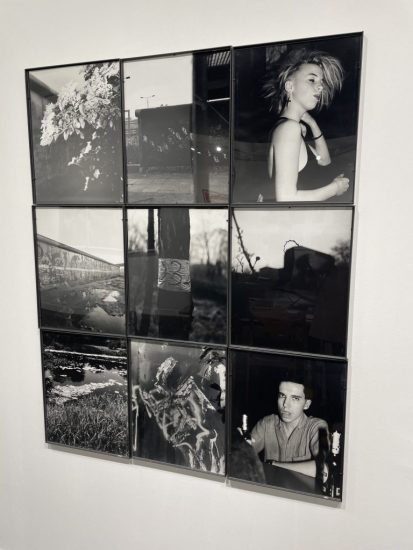 Christian Berst (here): This booth was a wall-filling solo presentation of the self-portraits (in both black and white and color) made by the Polish photographer Tomasz Machciński. This hatted and bearded ensemble with a dark stare hardly does credit to the artist’s broad range of exuberantly eccentric personas, where gender identifiers and social roles are intermixed with wild abandon. Priced at €3500.

In Camera Galerie (here): A mirror and a rough physical tear smartly disrupt this female nude by Thomas Vandenberghe. Extra legs seem to multiply and intersect, making the collage all the more disorienting. Priced at €1600.

Vandenberghe’s 2016 photobook Can’t Pay You to Disappear was reviewed here.

In Camera Galerie (here): This 1971 image by the British fashion photographer Laurence Sackman uses the reflective side of a toaster to capture a fragmented female nude. The lesser known Sackman belongs to a group that includes Helmut Newton and Guy Bourdin, where provocative eroticism is given stylized visual packaging. Priced at €5500.

Casemore Kirkeby (here): This 2018 image by Whitney Hubbs finds the artist transitioning from body parts as direct subjects to the body as seen indirectly or indistinctly. Here shiny gathered fabric adds drama to a tactile formal study, leaving open-ended space for the viewer to find an underlying shape, outline, or body. Priced at $4000.

The artist’s 2017 photobook Woman in Motion was reviewed here.

Braverman Gallery (here): This booth held a number of examples from Ilit Azoulay’s most recent series Mousework, where medical photography, the doctor/patient relationship, and the diagnosis of female hysteria come together as a backdrop for visual constructions that unpack and reconsider past and present. In “Augustine”, held poses and positions tell one story, while magnified details allude to other possibilities. Housed in a special artist-designed frame/case, and priced at €8300.

Sous Les Etoiles Gallery (here): This booth was a solo show of the work of the experimental German photographer Gottfried Jäger. In this 1973 set of four variants, the artist used a multi-lens camera and additive color diffusion techniques to create the intricate grid patterns of layered dots. Priced at €14000.

James Hyman Gallery (here): This August Salzmann 1854 view from Jerusalem is an enveloping study of texture. The temple walls are delicately arched, and the brick surface washes from light, to medium, to the rich darkness of the encroaching grass with a sense of crisp modernity. Priced at €21000.

Galerie Lumière des Roses (here): This gallery is known for its anonymous and vernacular photography discoveries, and this small c1910 soap bubble study by an unknown maker was definitely an eye catcher. The nested bubbles shine with scientific perfection, like glass domes. Priced at €1400 and already sold.

Galerie Thomas Zander (here): This image was part of a larger group of images by the Peruvian photographer Tarrah Krajnak where the artist uses her own body to recreate famous nudes from the history of photography. Here the folded knees of a classic Edward Weston nude are reimagined with plywood, cinderblocks, and a long shutter release, with the artist’s Latin American heritage changing the dynamics and implications of the composition. Sold as a complete set/portfolio, and already on reserve.

Galerie Karsten Greve (here): This booth was a deep solo presentation of Herbert List’s work in the Mediterranean. While some vintage prints are on display, many more of the prints are modern posthumous prints like this one, made in the port of Piraeus in Greece in 1937. It’s a Modernist study of circular geometries, using the portholes and vents (and their shadows) as the visual raw material for a pared down, high contrast composition. Priced at €2300.

Stevenson Gallery (here): This new work from Mame-Diarra Niang comes from the series Lethe. Large scale head shots taken in the streets dissolve into an expressive misty blur, almost like color studies, pushing identity toward something more uncertain and elusive. Priced at €6000.

Kicken Berlin (here): This 1981 image of port infrastructure by Tata Ronkholz turns a study of bracing beams into an all over geometric patterning, the V-shape of the supports drawing our eye down the center of the insistently high-contrast composition. Priced at €6600.

Kicken Berlin (here): This grid of portraits by Helga Paris was taken at the Treff-Modele clothing factory in the mid-1980s. It’s an engaging and subtle view of the lives of East German women at the time, getting beyond the work smocks and 80s hairstyles to the everyday choices of women young and old. The entire set of 28 prints was on hold, but individual prints were available at €7000 each.

Kicken Berlin (here): Anne Dilling was a discovery for me at this year’s fair. Apparently she studied with Otto Steinert in the late 1950s and early 1960s and was a part of the larger Subjektive Fotografie movement in Germany. This tonal inversion of light and dark expressively leans toward total, all-over abstraction. Priced at €4000.

Loock Galerie (here): Gabriele Stötzer was another new name found at this year’s fair. Stötzer was a pioneering feminist artist in 1980s East Germany, and this performative work combines two women (one of which is the artist herself) and an extended star of dark hair into an illusory series of doublings and extensions. Priced at €8000.

Flatland Gallery (here): It felt like Ruud van Empel had disappeared a bit from the contemporary photography scene in recent years, so it was good to see new work from him being shown again. This small Morandi-inspired study builds an elemental still life out of plastic bottles and paper towel rolls, each item rendered in the artist’s software-perfected, hyper-real style. Priced at €6000.

Robert Morat Galerie (here): We recently wrote about Jessica Backhaus and her excellent photobook Cut Outs (reviewed here), so it was intriguing to see actual physical prints from the series in various sizes. This large print really shows off the textures of the papers and the background, the tactile roughness of the paper itself and the cut edges of the shapes becoming much more engrossingly visible up close. It was a great reminder of the power and presence of in person viewing, however superlative book reproductions may be. Priced at €6000.

Robert Morat Galerie (here): These two new works by Andrea Grützner aren’t a diptych exactly, but they show the same disorienting scene as illuminated by different sets of lights. Grützner has become an expert at using the flattening eye of the camera to create complex spatial relationships, and these images turn a slatted room corner construction of some sort into dizzying swirls of perplexingly geometric light and shadow. Priced at €6000 each.

Galerie Nordenhake (here): This grid of dark imagery comes from Michael Schmidt’s now-iconic Waffenruhe series from the mid-1980s. Documenting life in Berlin right before the wall came down, the images are filled with scars and decay, and these vintage prints have been fittingly framed in simple rough steel. The moody gloom and apprehension in the pictures is as strong as ever. Priced at €240000.