NADA New York feels like an art fair in transition, an annual gathering that given a shifting landscape is still trying to figure out what it wants to be. This year’s version moved up from its usual May dates (opposite Frieze) to join the already jam-packed Armory Week, and decamped to a new warehouse-style location in the West Village. These choices generated two visible outcomes.

First, the 2017 version of NADA had to fight for attention (and collector time) with many other worthy competitors, so I’m not sure that when all the time slicing was done, it ended up with more visitors than it had had in its previous May dates – when I wandered the halls, it didn’t feel hugely bustling, which is fine for a collector, but perhaps less so for an exhibitor. And second, while many of its member galleries were still showing in the fair’s signature closet sized booths (just big enough for two people to stand in), the new location lacked the airy height of the previous Basketball City spot, the lower ceiling giving the experience a tighter, more cramped feeling, even with the empty space left in the center of the booth plan.

Photographically, NADA New York has often been an almost contrarian scene, with a selection of contemporary work that doesn’t tend to show up elsewhere. So for those that wanted to expand their horizons and find some new photographic paths to follow, this year’s fair offered a measured dose of experimentation. While some of the names (Viktoria Binschtok at KLEMM’S or Mariah Robertson at 11R for example) would have been familiar to those avidly following the front edge of the medium, there were plenty of others on view that might be new discoveries.

The slideshow below is roughly organized along my particular walking path through the fair, starting to the right out of the entrance and moving up around the outside first, and then back along the inside ring. The individual works are accompanied by description and analysis, along with linked gallery names, artist/photographer names, and prices where appropriate, to facilitate easy follow up. 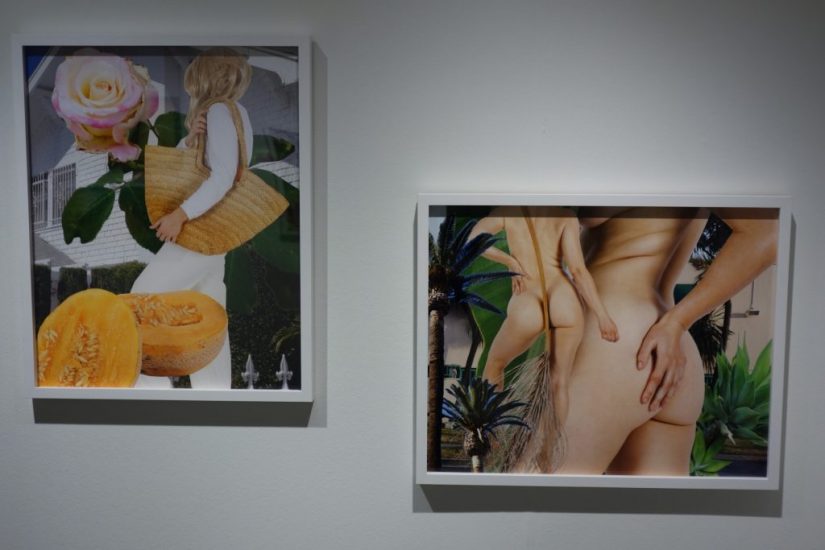 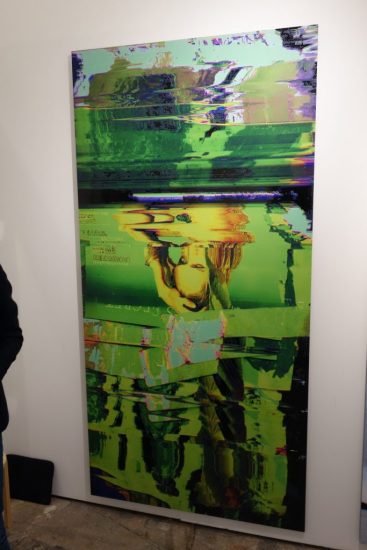 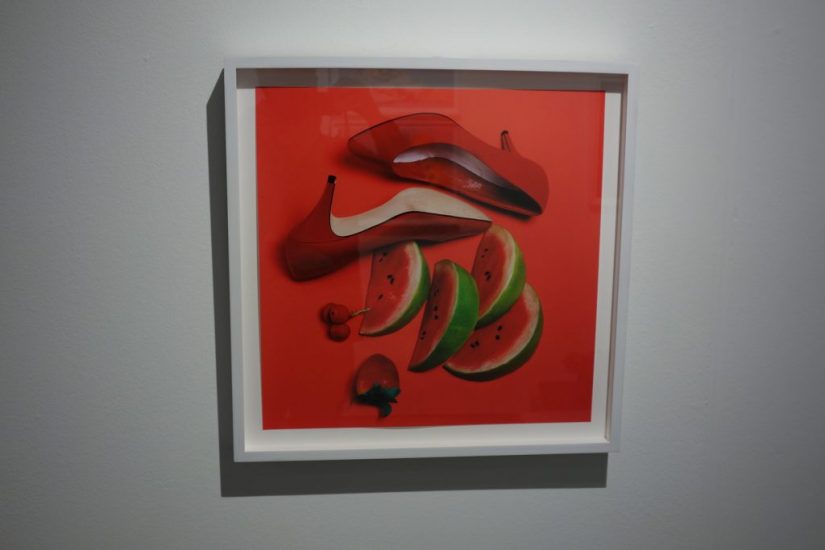 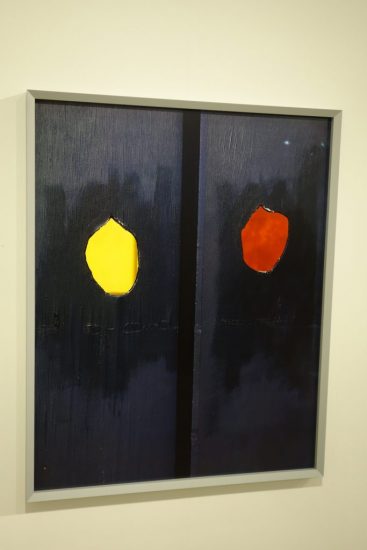 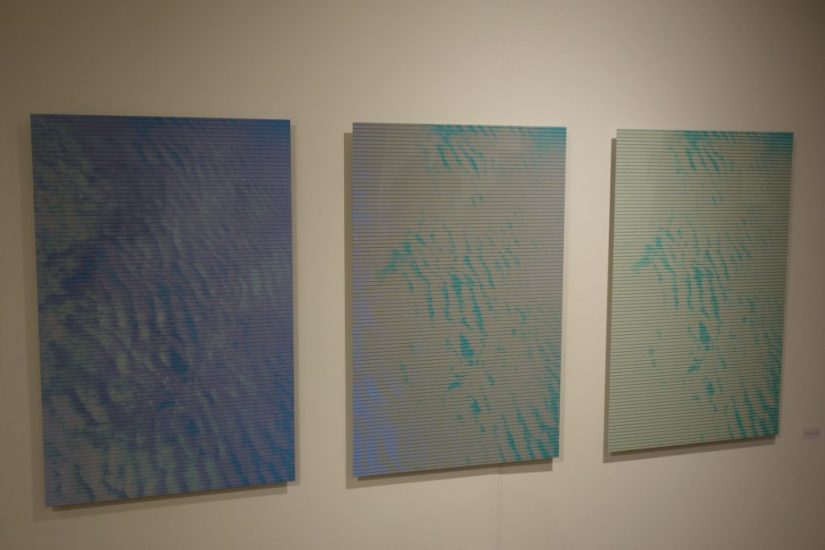 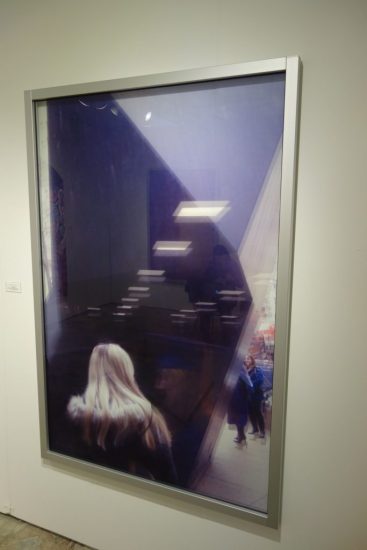 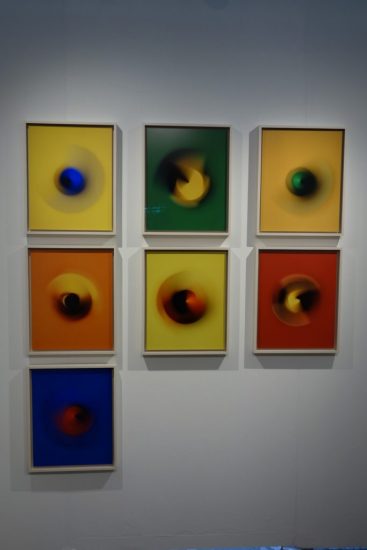 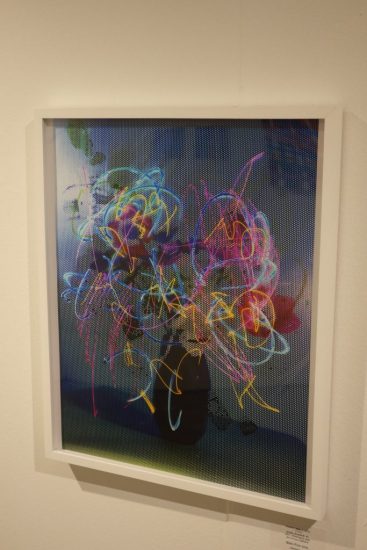 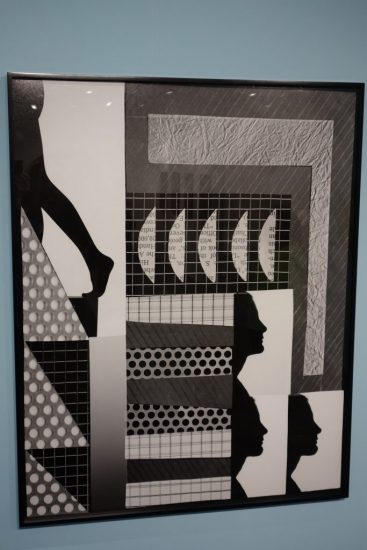 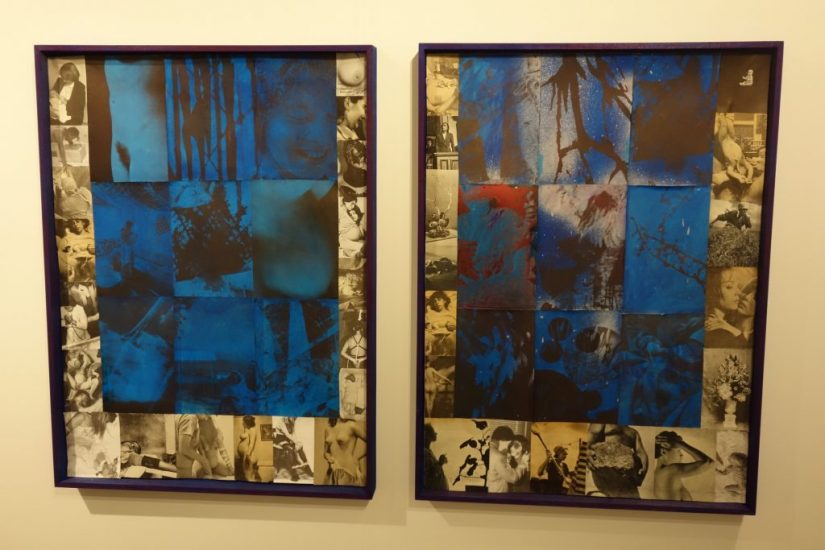 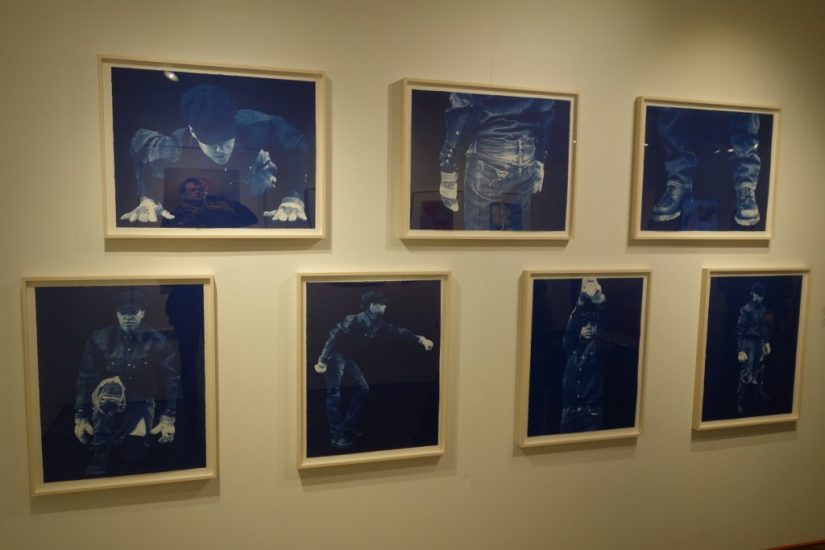 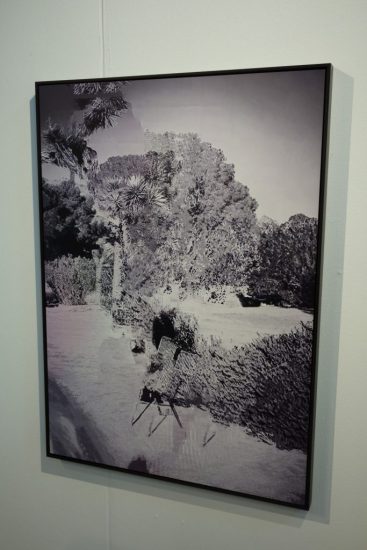 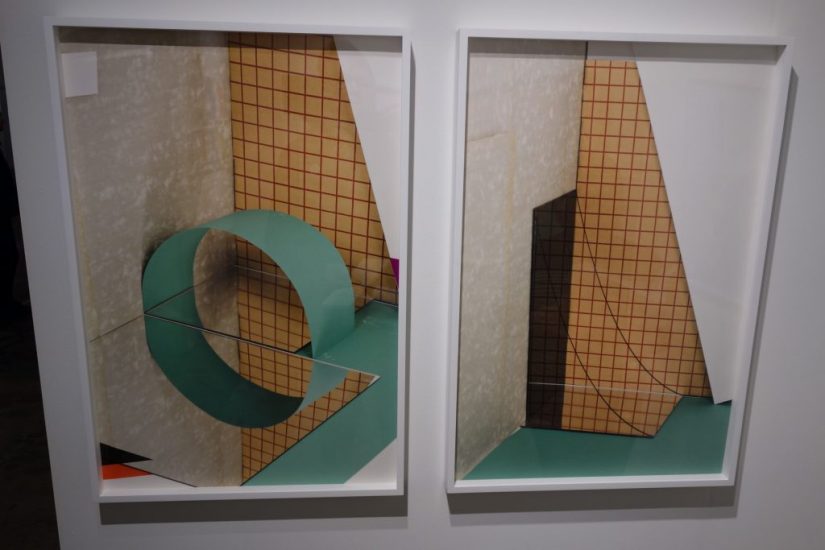 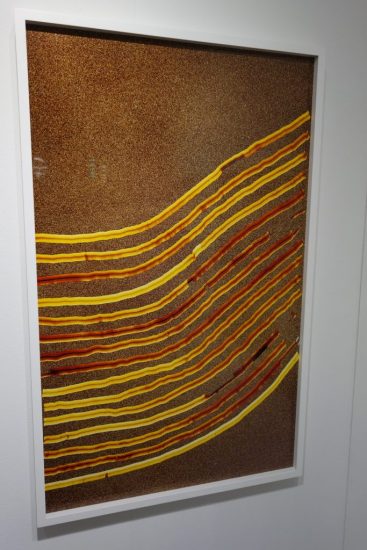 Ltd Los Angeles (here): Chanel Von Habsburg-Lothringen, $2800 each. These works brashly bring together a brightly slick commercial look, bold feminist motifs, and a digital age image collage aesthetic. The results have confident energy (in a Roe Ethridge meets Linder kind of way), even when the platinum blonde wig tilts a bit to the side.

Super Dakota (here): Chris Dorland, $12000. This booth was a solo show of Dorland’s recent work, with large glitch-driven imagery descending into a dark dystopian mood. Scanned advertisements dissolve into scattering technical distortions, the shiny black of the raw panel underneath showing through to further enhance the machined look. While we’ve seen plenty of digital glitching effects before, Dorland seems to be chasing a grimmer, more inhuman view of the language of technology.

Rawson Projects (here): Barb Choit, $3500. Choit’s mix of vintage high heels and fake fruit is part of a larger series that features 1980s-era women’s shoes in staged scenes that wander between the crispness of a commercial shoot and the careful arrangement of a Dutch still life. That balancing act gives the setups some visual friction, and the eye popping red in this particular work stands out from a distance, especially in a warren of white cube booths.

Galerie Éric Hussenot (here): Barney Kulok, $6500. Many of Kulok’s images in recent years have been rooted in the interplay of texture and surface, and this picture continues that pattern of thinking. Its subject isn’t entirely obvious – it’s the back side of a carnival mural, with holes for two heads. Up close, gestural brushwork covers the deep blue board, with a subtly darker layer around the openings, and bright color fills the holes, adding a splash of vibrancy.

Galerie Parisa Kind (here): Julien Bismuth, €10000 for the set of three images. Starting with a simple image of clouds in the sky, Bismuth has iteratively encrypted the image with a short phrase in Portuguese, increasing the number of bits per byte in each round. In the successive images, the picture becomes less legible, the colors shifting and the clouds dissolving into indistinctness. That reduction process is what’s intriguing here, the incremental removal of information pushing representation into abstraction.

Night Gallery (here): Rose Marcus, $10000. In this work, Marcus has printed her image on transparent film (mounted on glass) and replaced the areas of white in the photograph with clear blocks. When light hits the surface of the work, it casts angled shadows on the wall behind it, creating the shimmering doubled effect seen above. This subtle movement gives the work a layer of uncertainty, like time shifting or the flash of an altered perspective.

Galerie Antoine Ertaskiran (here): Jessica Eaton, $20000 for the series of 7 prints. In reviewing Eaton’s recent show at Higher Pictures, I wished that she had shown some of her new spun works in a grid, as I thought they would resonate well in a group. So I was happy to see a tight set of 7 images on view here, as it confirmed for me that the works do speak to each other when hung in close proximity. This group is an homage to Carmen Herrera’s Days of the Week series, and turns those hard edged abstractions into soft rounded blurs of fluid color. Seen together, we follow the linkages of color from work to work, like the steps of a progression.

Maki Fine Arts (here): Kazuhito Tanaka, $1200. While these florals might look like light drawings or digital mark making, they are actually straight photographs. The bouquet itself sits behind a perforated screen, and Tanaka has then physically drawn on the screen with bright colors, bringing a gestural echo to the form in the background. As mediations go, it’s thoughtful and original.

Marinaro Gallery (here): Hannah Whitaker, $5500. This new work from Whitaker continues her exploration of in-camera blocking and templating. Using multiple exposures to build up her final composition, the work combines various geometric areas of texture, from silhouettes and crinkled paper to perforated holes and wire fences, its high contrast black and white giving the amalgamation some visual punch.

Lower East Side Printshop (here): LaToya Ruby Frazier, set of 3 cyanotype prints, $10000, set of 4 cyanotype prints, $12000. These images come from a recent performance Frazier did outside a Levi’s shop, where she dressed like a steel mill worker from Braddock, PA, (a place she has photographed for years, highlighting its struggles and failures) and went through the motions of various tasks and jobs. The irony of the whole situation is palpable (the commercial stage in contrast with the poverty created by the now closed mills etc.), but Frazier turns the staged labor study into a gestural taxonomy of pushes and pulls.

Microscope Gallery (here): Zach Nader, $4000. Nader’s works feel like a conscious exercise in removal and destabilization. Starting with scavenged commercial images, he iteratively erases the main subjects, leaving behind landscape scenes that he then further reworks, degrades, and desaturates. These digital machinations ultimately break down the image into painterly marks and repetitions that jostle and hum, never quite coalescing into stable equilibrium. There is a sense of deliberate damage taking place, the images being experimentally unpacked, leading to outcomes that bear only passing resemblance to the original visual communication.

Document Gallery (here): Phillip Maisel, $2000 each. Maisel’s photographic illusions can be added to the growing list of contemporary works that play with optical perception and rephotography. Using mirrors, folds, physical edges, transparent films, and other interventions (even a small hanging chain) in his sculptural tabletop abstractions, he smartly tests our ability to discern the separation of image and object.

321 Gallery (here): Evan Whale, $3300. Taking some cues from the techniques of Marco Breuer, Whale mixes sinuous scrapes and sprays of bleached dots into abstract compositions that resemble seismographic wiggles. Cutting down from the exposed black top layer into veins of electric orange and yellow, the works explore the physicality of photography, while turning that chemical reality into a playground for tactile interventions.