Yesterday, we spent the afternoon at the Armory Show in New York (site here), in search of interesting photography. Today’s coverage (in two parts) chronicles our systematic, back and forth visit to every booth in the show (at both piers), and tries to capture the important photography that can be found there. While we don’t consider this summary to be comprehensive (as we haven’t included each and every photograph on view), I think we have listed at least 90% of the photography to be seen and highlighted nearly all of the major works on the walls.

These posts are organized by gallery, with the photographers and number of images on view in parentheses. Often we took a marginal picture of what we saw (posted larger than usual so you can see the detail better), which you’ll find nearby. We didn’t spend a ton of time digging into prices with dealers, especially when we didn’t know the people personally or when there were only one or two photographs in the booth. With these caveats and assumptions, let’s get started with two aerial shots of the overall scene, taken from the stairs (one of the booths, another above the VIP area): 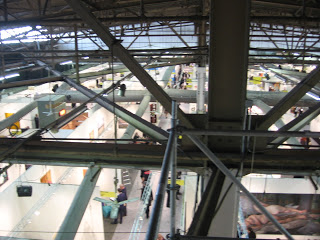 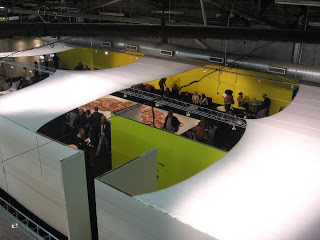 Now to the galleries (in no particular order):

Goodman Gallery: Mikhael Subotzky (8), 7 large prints from the Beaufort West series (below, first) and one large panorama covering an entire wall. The Beaufort images were much more impressive on this wall than when we saw them at the MoMA. Also at this booth, Nontsikeleo Veleko (2) portraits (below, second) which while covering ground we have seen before, were still striking. 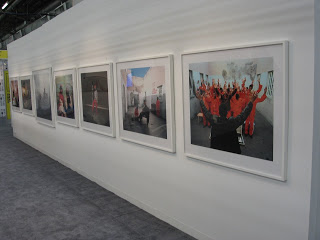 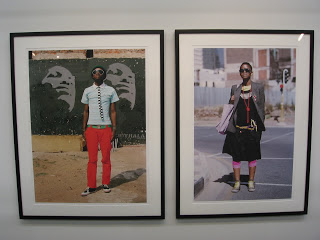 Galleria Raffaella Cortese: Zoe Leonard (6) aerials. (below) These are better than this picture would lead you to believe. The dense patterning is engrossing. 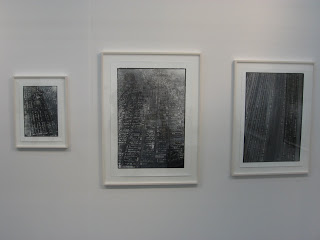 Mai 36 Galerie: Robert Mapplethorpe (4) black and whites, Thomas Ruff (2), one pixelated nude, one big interior architectural image.
Carolina Nitsch Contemporary Art: As we walked by this booth, there was an arresting set of bright pink florals (hibiscus) on one wall (below). We went closer to get a better look and find out who had made them. The answer: Vera Lutter. What? I thought there must be some mistake; she makes black and white camera obscura images (we own one). But no, the wall label was correct. The images are a portfolio commemorating the civilian deaths in Iraq, and is called Samar Hussein (names of some of the dead are faintly visible in the bottom of the images and are arrayed on pages in the portfolio). The price is $10000. Quite a surprise, but I liked them overall. Also in the booth, Peter Fischli-David Weiss (1). 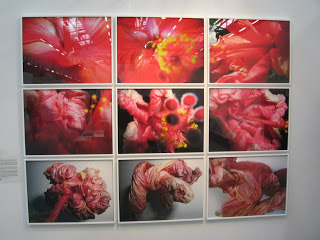 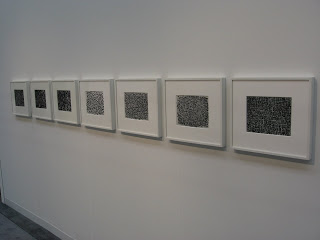 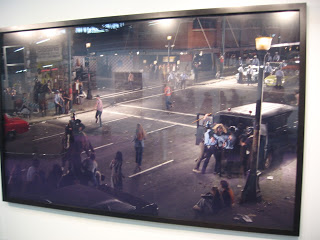 Galerie Krinzinger: Frank Thiel (1) (Untitled, Palast der Republik #35, 2007 below) I wasn’t that familiar with Thiel’s work prior to this show, but liked what I saw here and in another booth (Sean Kelly). Big images full of pattern. 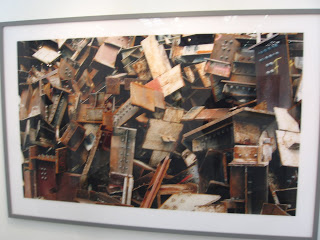 Galerie Mehdi Chouakri: Hans-Peter Feldman (3) florals (below). Since we’re floral collectors, we like to see everything related to flowers. These seemed more like commercial stills, printed extra huge. 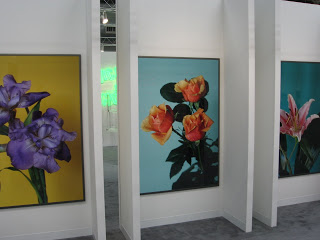 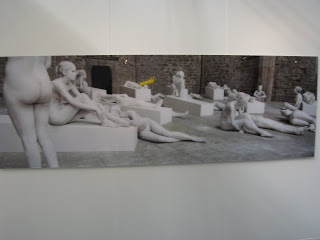 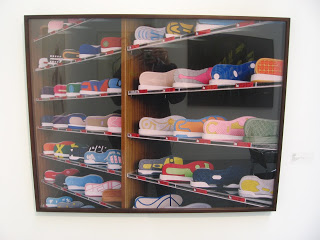 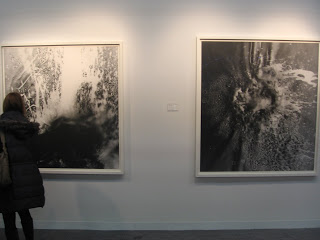 Jane Corkin Gallery: Barbara Astman (11) four large wide images (below), 6 arrays of color Polaroids, and one mural sized image. I wasn’t familiar with Astman prior to the show, but I liked these panoramic newspaper images, dense with lines. 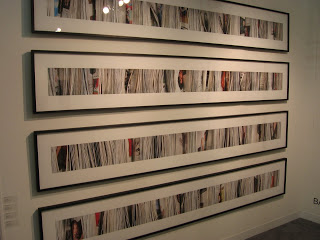 Sikkema Jenkins & Co.: Mitch Epstein (1) power plant, Vik Muniz (1) pictures of paper (below). This Berenice Abbott tribute is great to see close up, so you can examine the tiny scaps of paper used to make the image. 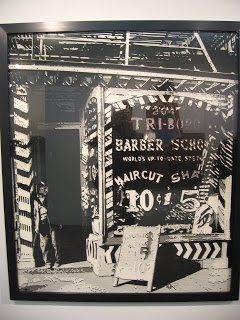 Niels Borch Jensen Gallery: Tacita Dean (8) images of burlap (below) These were somehow quite memorable for me, even though the subject matter is mundane. 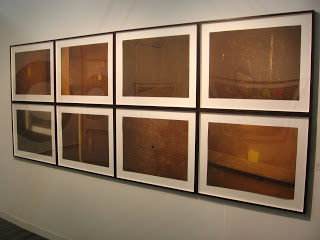 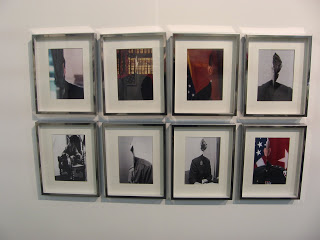 PKM Gallery: Sangbin Im (4) Something about these antique/fabricated looking city scenes and cathedrals is eerie. 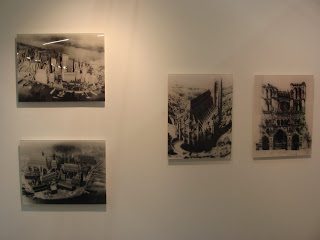 Michael Stevenson: Youssef Nabil (15) portraits with tinting, David Goldblatt (6) three pair of images, Guy Tillim (11) pinned directly to the wall.
Kamel Mennour: Zineb Sedira (1) (The Lovers III, 2008, below) My first thought was that this was another Burtynsky ship dismantling scene; it isn’t but it still made me smile. 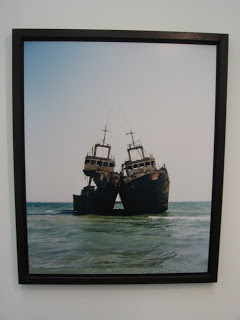 Galerie Laurent Godin: Aleksandra Mir (2) images of a blow up plane landing in Paris (below). These two images are unexpected/paradoxical and therefore intriguing. 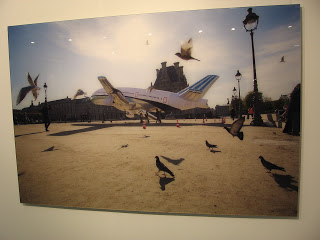 And finally, one painting by Adam McEwen at the Nicole Klagsbrun Gallery. While there were many witty remarks on the state of the art world, I liked this one the best: 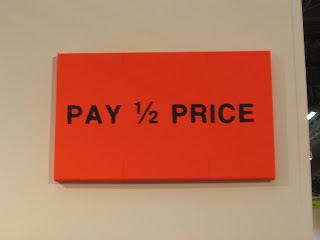 While there were plenty of photographs to be seen, I didn’t come away with any overarching theme concerning the state of contemporary photography from this set of galleries, nor did I find any new hit stars to shower with glory (although I enjoyed seeing the work of Frank Thiel for the first time.) Perhaps we should think of this as a time of retrenching it seems. Part 2 of this crazy and hopefully helpful summary (the galleries at Pier 92) can be found here.
Twitter| Facebook|