Editor’s Note: The Paris Photo Los Angeles fair held last weekend was one we unfortunately couldn’t attend in person, but we asked Carol Lee Brosseau to gather up her image highlights as a proxy for actually walking the halls ourselves. Carol Lee is an LA-based art advisor, appraiser, and former gallery director at Joseph Bellows Gallery (her site is here). We’ve known Carol Lee for the better part of a decade, and she has always had an uncanny ability to understand our eclectic eye for work. While she has been able to highlight images that fit into our personal collection with surprising consistency over the years, the choices and comments below are her own. -LK

Paris Photo! In Los Angeles! On a New York back lot!

To me, Paris Photo LA at Paramount Pictures Studios is one of the most fun art fairs to attend. The relaxed and entertainment-driven atmosphere is a welcome antidote to the often hectic grind of other art fairs. While the majority of galleries are set up in booths on the larger sound stages, several galleries and the book dealers are set up in the “brownstones,” “shops,” and “cafés” of the New York City street back lot. The result is essentially a faux city where guests can go door-to-door, just like gallery hopping in Chelsea. It’s like The Truman Show…with photographs.

Visitors snack on tacos from food trucks and sip wine or beer on any one of the “New York City stoops,” chatting, people watching, and celeb spotting. The outdoor spaces and sunny LA weather make the fair quite a pleasant place to be.

This year there are 80 galleries and book dealers from 17 countries. The inclusion of so many international galleries is nice as they offer fresh work not often seen in LA. The fair is heavy on contemporary photography. There are some vintage photographs and older work sprinkled around, but the vast majority of the work is medium to larger-scale contemporary.

Missing from the fair are a lot big names in photography, referring to both dealers and photographers. (Galleries such as Gagosian and Fraenkel, who have participated in past years, were absent this year. And it’s been a while since I’ve been to a photo fair with out seeing an Eggleston.) I couldn’t help but think it would be nice to have more classic photography and more of the staple photo dealers there to give context and to balance out much of the newer work and younger galleries. But I suppose when you’re standing in a temporary plywood room just inside a brownstone façade on an artificial New York street in Los Angeles, the need for context has already been eliminated. And it is in fact refreshing to see so many new galleries and new work represented.

All in all, Paris Photo LA is a great way to spend an afternoon or a weekend and see lots of art. Here are some of the highlights for me. 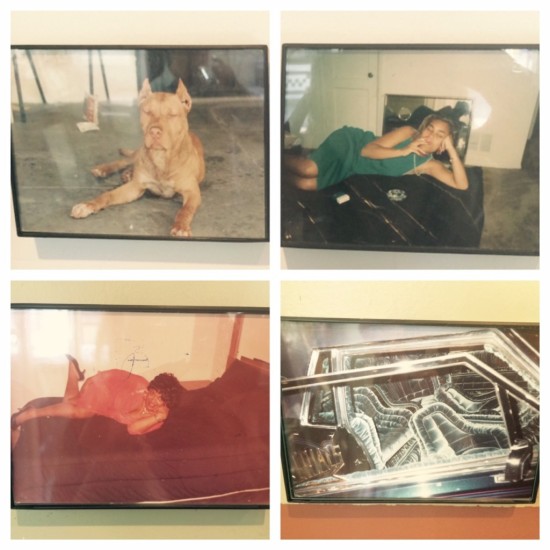 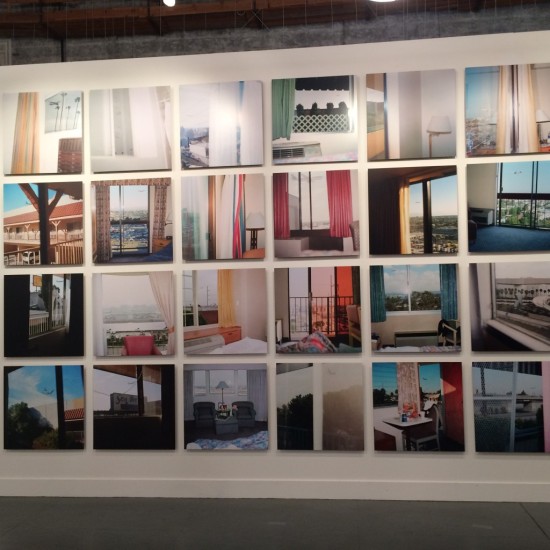 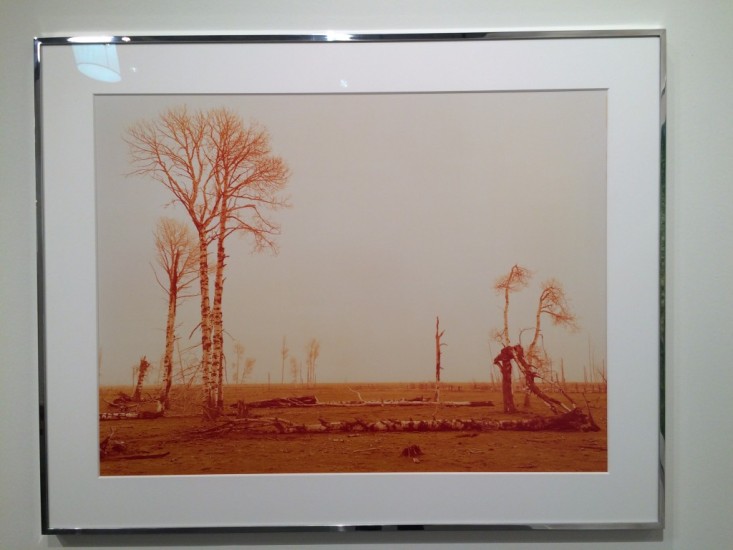 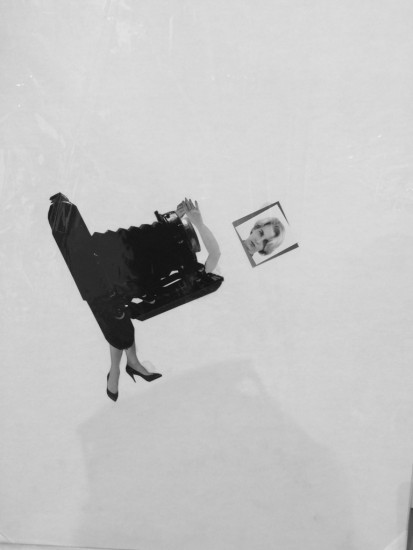 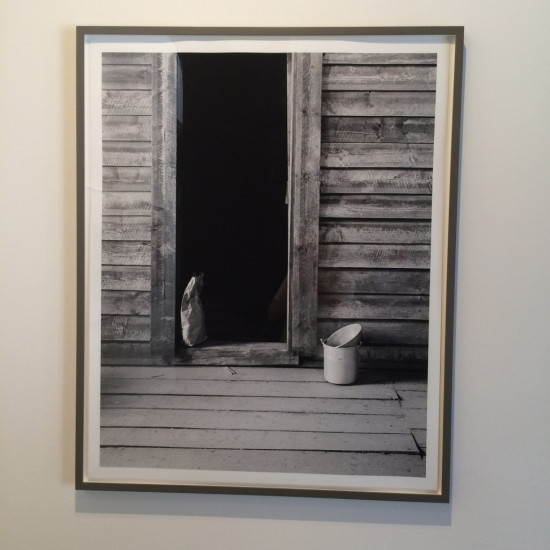 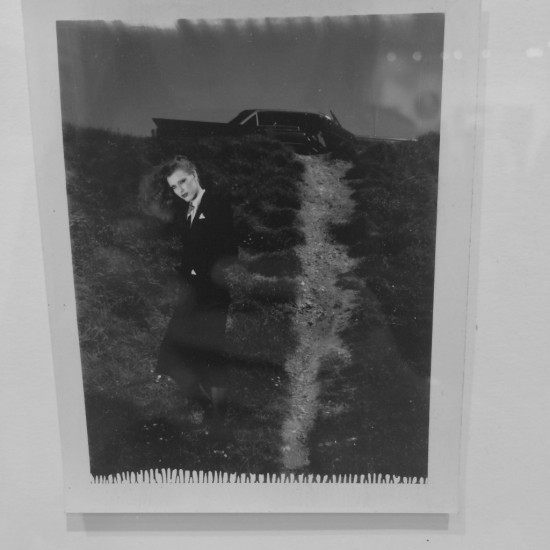 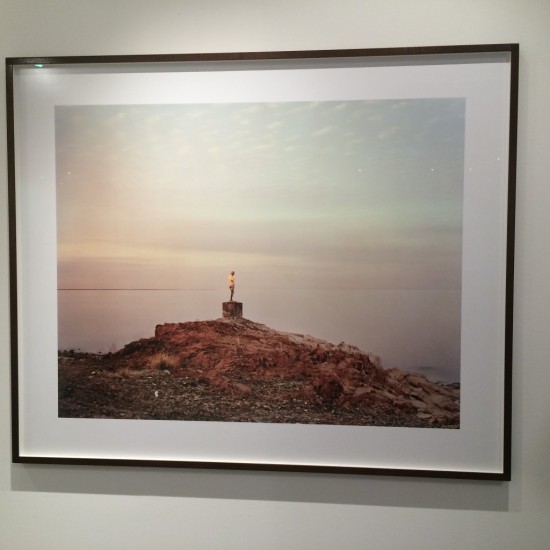 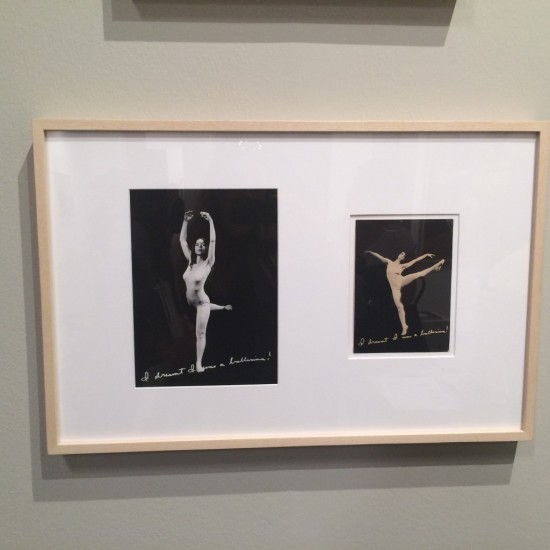 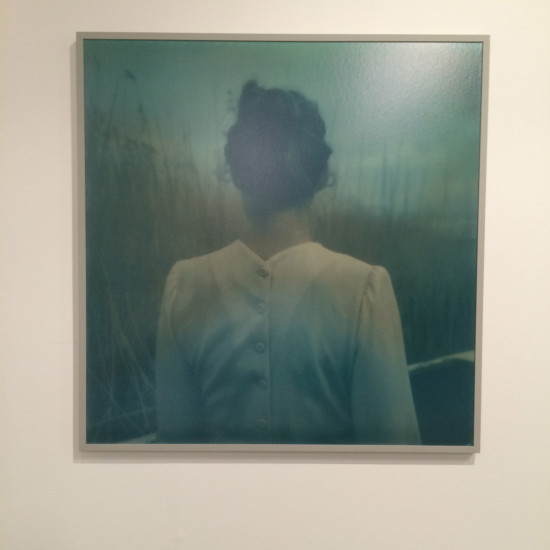 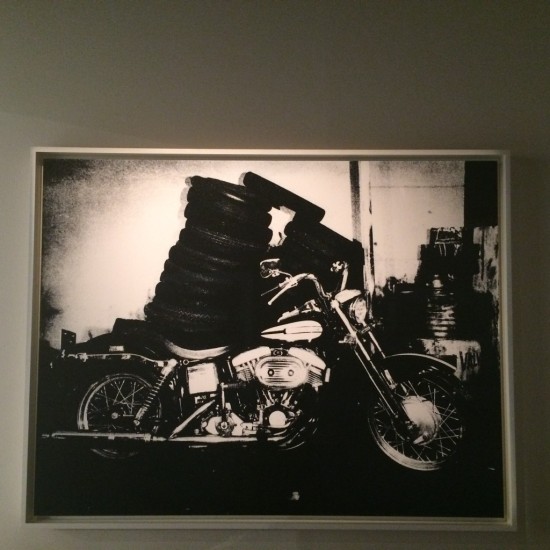 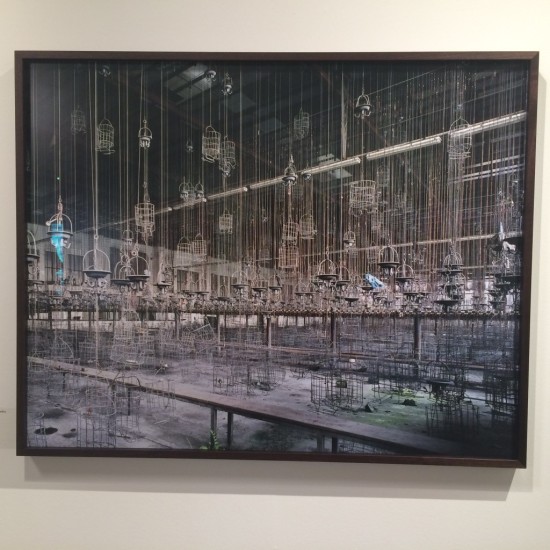 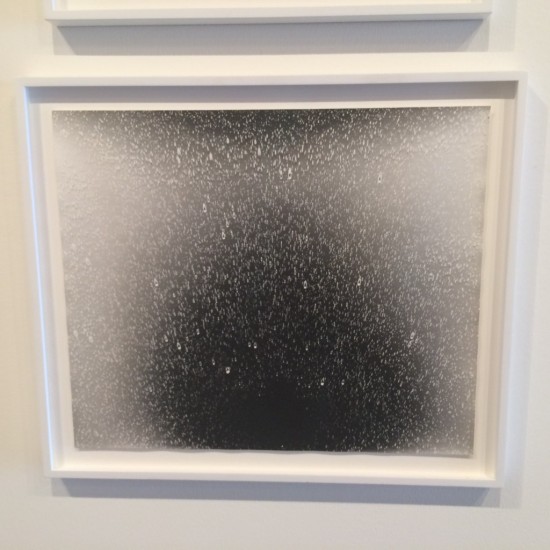 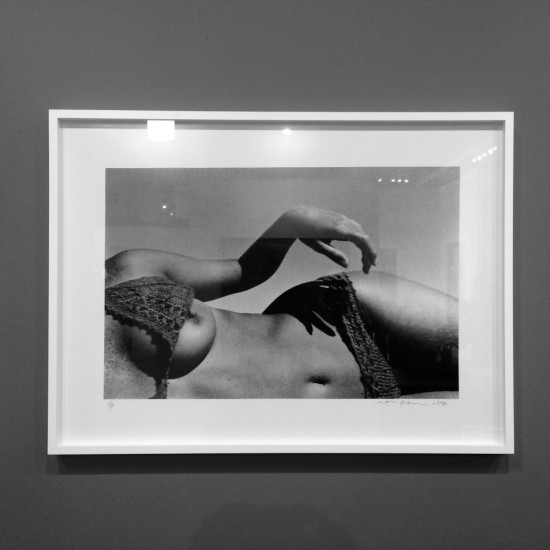 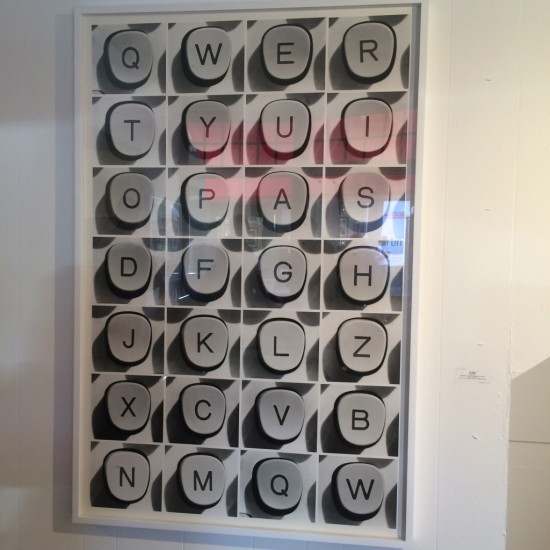 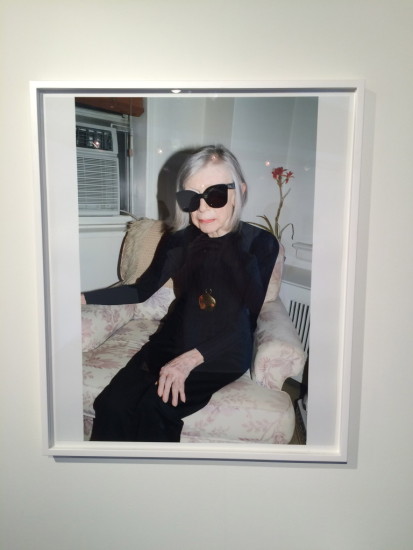 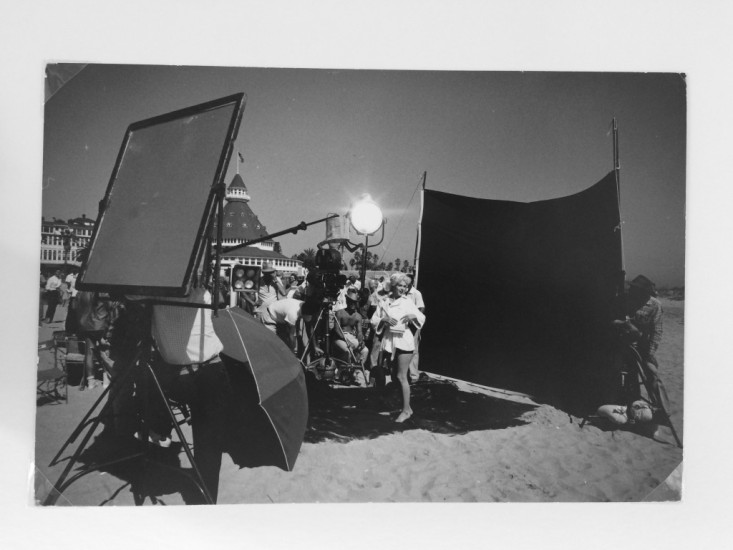 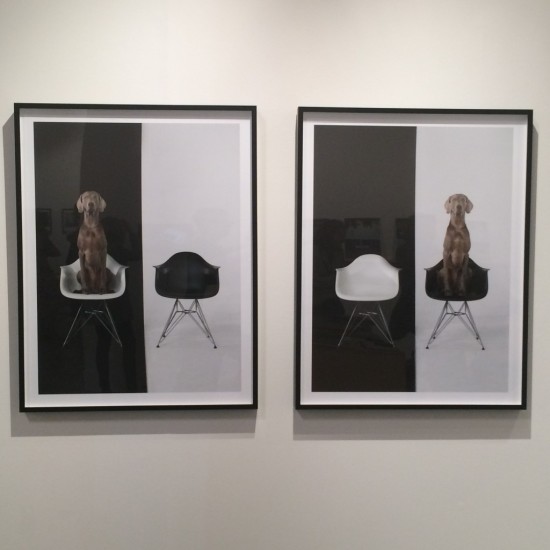 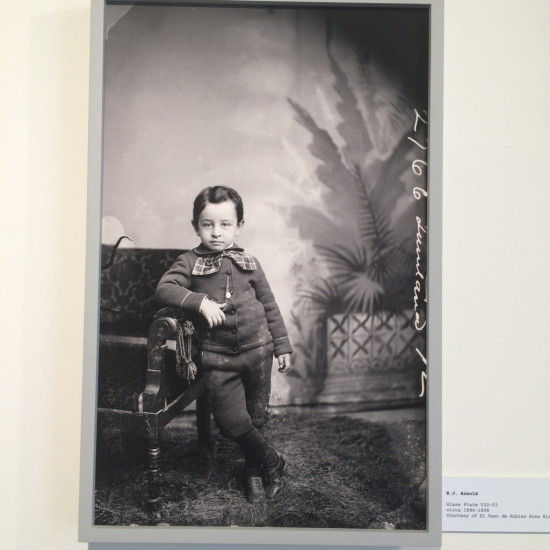 This archive of approximately 2,500, 3” x 5”, color photographs, all taken in LA by one of the first members (or founders) of the Crips, was a stand out. Johnson has a good eye for composition, and he has created a fascinating, poetic, and in-depth portrait of his world. Some funny, some gritty; it is hard to stop looking. (Satiric Dancer lower left?)

From one of my favorite photographers working in LA, Travelodge is a great image from a series of 31 photographs of planes landing at LAX. Each is shot from the inside of every hotel/motel that surrounds the airport. When viewed as a series, Crosher’s examination of place is even stronger. I love the juxtaposition of interior and exterior spaces, and the dueling concepts of coming and going, of permanence and transience, and of fantasy and reality – how very LA.

Sherry creates surreal visions of the landscape by altering and manipulating color in the darkroom. The intensely unnatural hues let us experience the landscape in a new way, and we’re reminded of the evocative power of color.

An original collage made of photographs mounted on illustration board, exploring female identity and its relationship to technology and the media.

Another stand out for me was Oskar Schmidt’s photographs from The American Series, which look back through the history of photography to Walker Evans. Shot in a life-size set fabricated in the artist’s Berlin studio, the boards and props appear to be plucked out of Evans’ scenes. Schmidt’s photographs are all about precise composition, atmosphere, and place. They are less about humanity than Evans’, but one can’t help thinking Allie Mae is just inside the dark doorways.

I was familiar with Bourdin’s fashion and editorial work, but it was nice to see a group of early black and white Polaroids. I like the Film Noir feeling of this image.

This beautiful image was taken in a deserted Kazakhstan town that was once the site of Russian atomic bomb and missile testing (only recently “discovered” by a Google Earth satellite). The soft colors and the peaceful stillness of sky and sea are initially alluring, but the reality that the landscape is radioactive and tainted by a sinister past, makes the whole scene seem somehow apocalyptic. I love Kander’s eye for strange beauty, and his ability to make beautiful photographs that aren’t just pretty pictures.

A vintage silver print and halftone postcard depicting Antin as a ballerina. Antin’s work is performative as she explores female identity through assuming the roles archetypal female characters.

One of several lovely, ethereal, and dreamy images by Jensen.

This silkscreen on canvas is…well…just really cool. The texture and sheen of the ink on the canvas is rich and seductive, and the piece certainly evokes Warhol in both subject and process.

Cages in the now abandoned Hugo Mine in Germany from Marchand & Meffre’s Industry Series. These cages are where the workers would put their belongings when they were working in the mine. A fascinating and oddly beautiful image created by the delicate cages hanging in such an industrial space.

A unique photogram of rain on gelatin silver paper. In person the raindrops are clear and defined like little pear shaped diamonds.

Etherton Gallery had a solo booth featuring Gibson’s nudes in 30” x 40” and 40” x 60” gelatin silver prints. Gibson has previously not printed his work this large, and the result is terrific, as the graininess adds to the tactile quality of the bodies. This is my personal favorite. Others are more abstract.

The gallery had a solo booth of Lew Thomas’s conceptual photographs, which I’m still trying to wrap by head around. I’m not sure I totally get it (yet), but I like it.
(I think.)

A fun vintage press photo of Marilyn Monroe and Billy Wilder (right) shooting Some Like it Hot (United Artists, 1959).

A special exhibition of photographs made from the glass plate negatives of a 19th century studio photographer in San Louis Obispo, CA, offers a glimpse into the lives of early Californians. I liked the portraits of children who looked like mini adults.