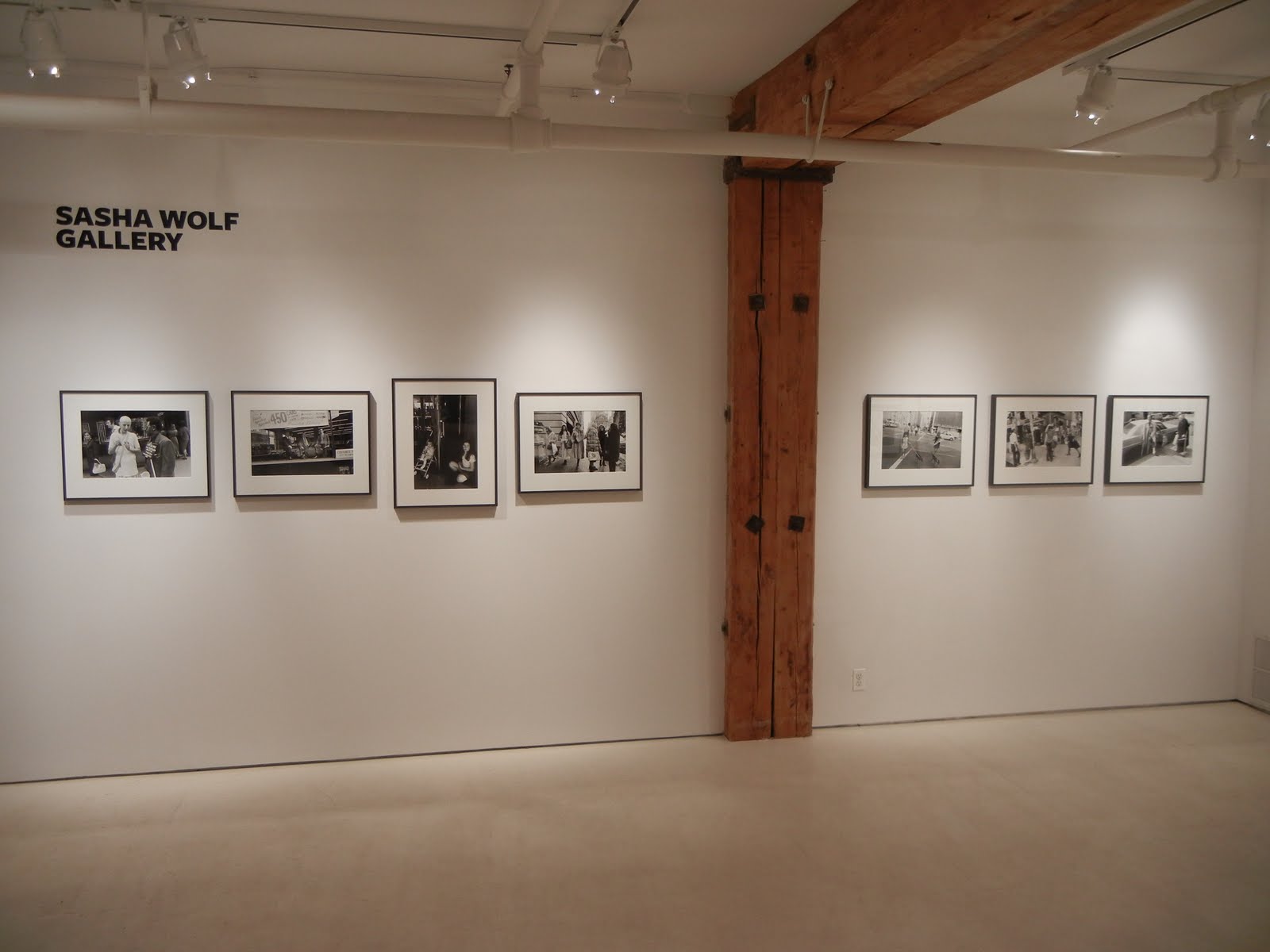 JTF (just the facts): A total of 21 black and white photographs, framed in silver and matted, and hung in the single room gallery space. All of the prints are modern gelatin silver prints, made from negatives taken between 1973 and 1978. 20 of the prints on view are 16×20, available in editions of 15; there is a single larger print over the reception desk (30×40), in an edition of 7. A monograph of this body of work has recently been published by Umbrage Books (here) and is available from the gallery for $45. (Installation shots at right.)

Comments/Context: Paul McDonough’s 1970’s New York street photography fits neatly into the broad category so famously defined by Winogrand, Friedlander, Levitt, Meyerowitz and many others. While we’ve seen a mountain of this kind of work before (going back to Cartier-Bresson) and can pick out plenty of visual echoes and influences in this show, it doesn’t diminish the fact that McDonough was consistently able to select and compose surprising moments of memorable warmth from the barrage of foot traffic on the city’s sidewalks.
. 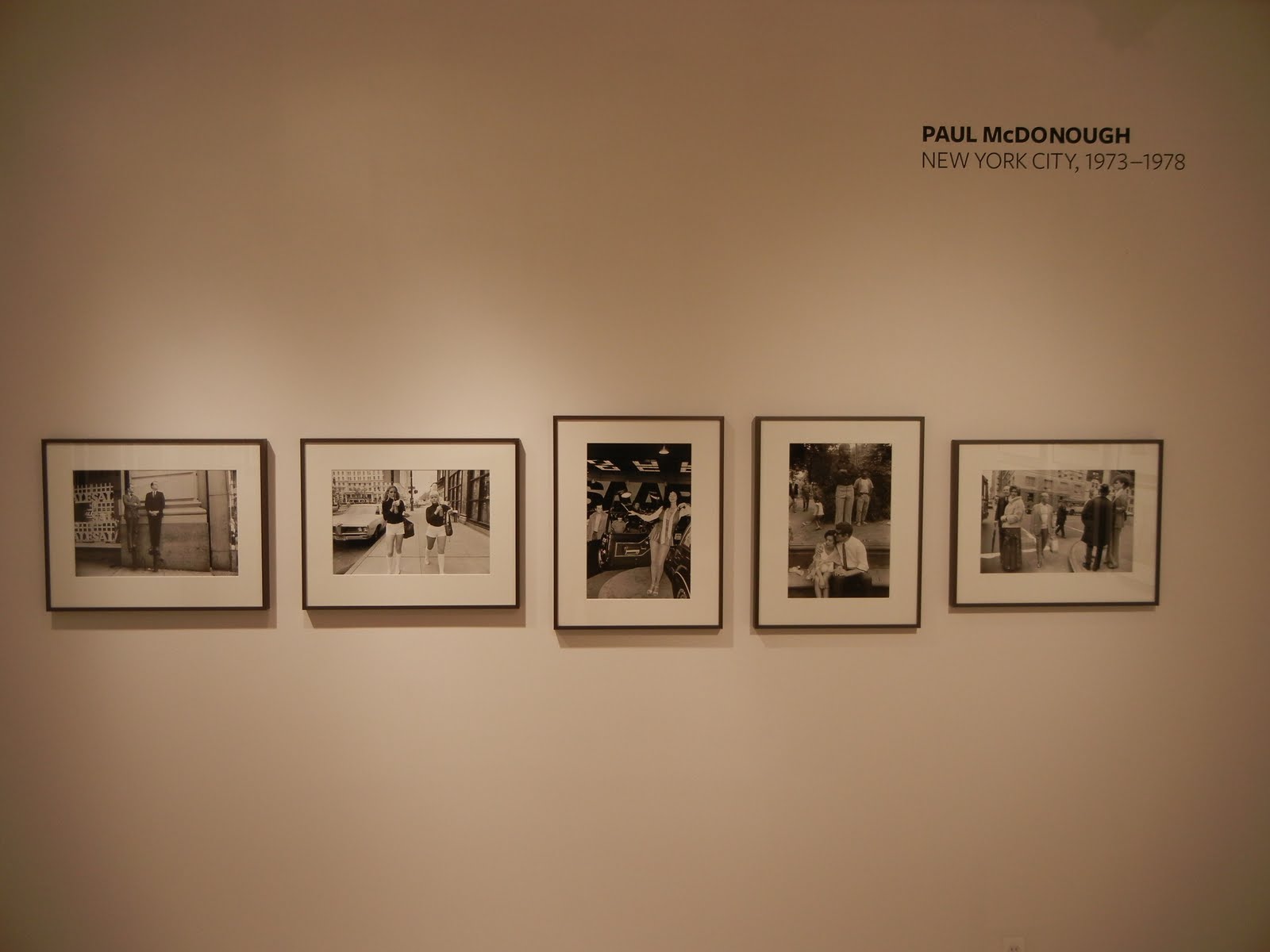 This genre of photography lives and dies on the whims of synchronicity – that ability to see a composition resolving itself as it happens, and the subsequent skill in framing and capturing that fleeting moment to highlight its transient juxtapositions, relationships and details. McDonough does it again and again in this selection of pictures: a passing handful of women all in fur coats, two men watching a parade perched on standpipes, a young couple with matching midair forks, three kids climbing on the same bent tree branch, a collection of people playing flutes and drinking from straws. His ironies are subtly amusing rather than aggressively harsh or biting, where short-lived gestures and glances tie a picture together without being too obvious. There is a terrific image of a disheveled artist with a bushy beard (a dead ringer for Hagrid of Harry Potter fame) earnestly measuring the chin of an ancient bust at the Met while wrestling with a large sketchpad; the visual back and forth of the similar faces is endearingly clear without being overly jokey.
.
I’ll admit that when I walked in, I was thinking I would bored by this show. And at first glance, McDonough’s street photographs don’t have a vivid or immediately recognizable signature style like those of Winogrand or Friedlander; instead, they have a cleverness that grows on you, as you investigate and unpack their everyday instants of wonder. In the end, although his work is not as well known as many of his contemporaries, there are too many well constructed pictures here to discount his talent as repeated accident. So instead, chalk this show up to yet another rediscovery of hidden excellence, buried in forgotten flat files for far too many decades, now ready to reemerge and fill in the gaps of an important period in recent photographic history. 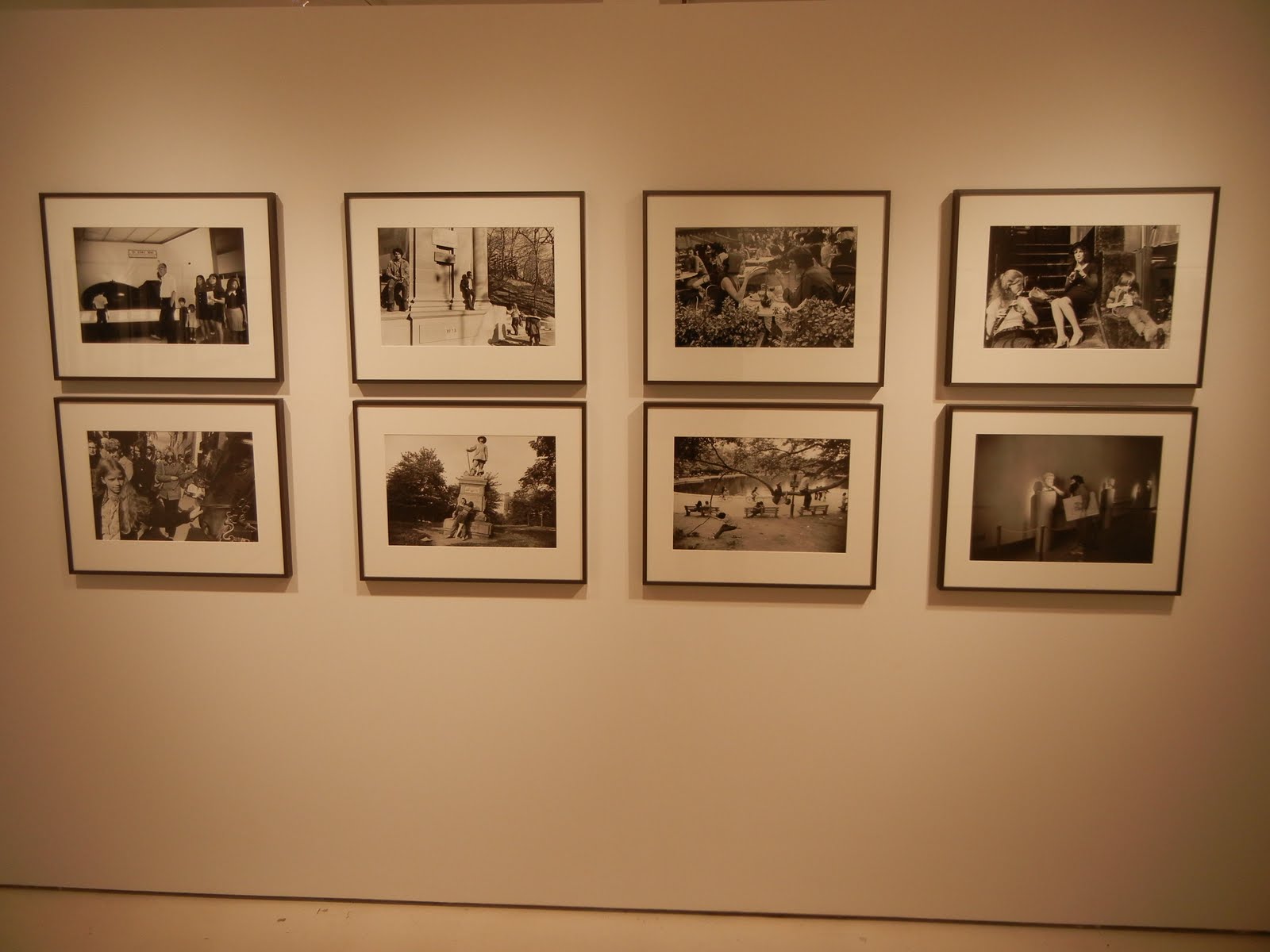 Collector’s POV: The works on view are priced as follows. The 16×20 prints are $2500 each, while the 30×40 print is $4500. McDonough’s prints (vintage or modern) have little auction history in recent years, so gallery retail is likely the only option for interested collectors at this point.
My favorite image in the show is Three Car Salesman, 1973; it’s second from the left in the top installation picture. The three men in suits stand together, each with one shoe poised on the window sill, underneath a sales sign shouting “450 cars to choose from”; beyond the visual echo of their three bodies, it’s like a scene out of Glengarry Glen Ross.
.
Rating: * (one star) GOOD (rating system described here)
Transit Hub:
Paul McDonough, New York City, 1973-1978
Extended through January 29th
Sasha Wolf Gallery
528 West 28th Street
New York, NY 10001
Twitter| Facebook|